What should we all make first?

I was thinking that carving a pistol, or an assult rifle would be easiest, (especially with easy to get hand on wood)

But do we want to attempt something harder? Like the helmet? Lets take a vote. 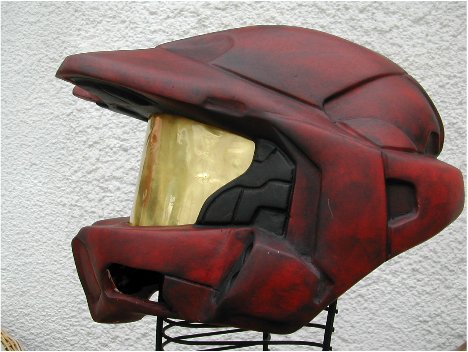 I say something not too difficult, but still necessary for the costume... Maybe the gloves?

Ive seen a full shot some where of that whole suit, is that urs adam?

Colonial Regiment
What to do first...

When I first started I began by making the gloves. It was an easy, quick project. Second time around, when I knew what I was doing I started by rebuilding my helmet. Thats what most people want first...but not really the best thing to start on...y'know til you get used to working with the materials and whatnot it's probably advisable to begin with something simple.

Southern Regiment
i started with the helmet 1st did bunch of version then came down to the finally one that i make for others, then i moved on to the armor then some weapons and more weapons
O

I didn't make a MC suit yet, but I am planning to very soon. So I'm thinking about starting with either Master Chief's belt, or his helmet.

The Pistol would be a nice thing to start on. Simple, small, and hella cool.
The helmet is probably the best standalone piece of armor to have, but far from the eisiest to make. Good idea on having everyone make one thing.

But I myself have put some serious thought about about making a Battle Rifle as my first project. For some reason I spent a lot of time making sketches on how the trigger would work. It's complicated, requires a lot of random stuff (ie. a block of iron, some meltable blastic stuff, a spring, a blowtorch, and a piece of chirundum (sp?[the mineral that's #9 on moe's scale of harness]), and three screw driver shafts). came up with it on my own. probably won't work, but seems like it will be fun to make.

Southern Regiment
the battle rifle is fun to make as a static prop dont try to make it really fire....if you do want it move and all that jazz would take longer than you think
S

I'm not expecting it fire anything, only have a movable trigger. I also made some sketches on how to have a removable clip. So far I have it down to using a tight fit between the magazine itself and the inside of where it goes in the gun, and using 6-8 magnets behind a very thin layer of vacuuformed plastic. looking into attaching a working scope on it too. I'm sure I could find one somewhere...

Southern Regiment
you might want to use a spring for the trigger to pull it back. for the ammo i know another way i'll have to draw it up for you
S

Southern Regiment
well that would be a good start
S

for the ammo clip why dont you just use a slighty snug fit and lond piece of velcro across the top, that would work