You light up my Master Chief..

I know there was a post here somewhere, part of another thread, that talked about lights on the masterchiefs armor. ( I think it was the "armor and Battlerifle thread).

They (I think it was red?) said they counted 8 lights.

Two chest light panels (right near the nipples as seen on the oversized image of the blue spartan on the left edge of the Snowbound image)
http://www.bungie.net/Games/Halo3/SlideSho...ots&slide=9

One light panel on each shoulder plate. (in that same image, they are barely seen, and possibly not lit.. it's almost like each one has an independant light sensor, but on that campaign shot from Bungie, you can see it.) http://www.mjolnirarmor.com/halo-gallery/g...NewsweekLrg.jpg

Then two light panels in the oblong slots in the thigh armor, directly over each knee. (This one I saw first on artwork, but I beleive I saw it "confirmed" on one of the screenshots.. don't remember for certain.)
You can see SOMETHING going on, in that same snowbound pic, with the same blue spartan.. The lights look different though, if that's what they are.. there's not black outline like there is on the other light panels.

On this pic, you can see the thigh ones, plus the shoulder one, and one at the top of the codpiece?
http://www.mjolnirarmor.com/images/halo3/2%20(14).jpg

FYI, you can't always trust the artwork, for example the opening graphic on the EGM article showed a spartan with a gun on his hip, one on his back, and one 2-handed gun in his hands, which Bungie officially said was inaccurate.. one 2-handed gun at a time, total. Here's the same picture, but in the Japanese magazine scan.
http://www.deadguy.net/h3ref/japan-halo3-1.jpg

BTW- those of you in England have had this main picture released as a poster (backed by Gears of War). It was a promo poster, or a poster pulled-out of a magazine. Can anyone score one for me? I'll buy it if it's not too expensive, please PM me.

The graphic used on the cover of that magazine issue was part of a larger image which clearly showed the light panels in the slots on the lower front of the thighs. You can see the full image on one of the japanese magazine scans (on the right side.. in the smoke.. best halo 3 artwork EVER..).
http://www.deadguy.net/h3ref/japan-halo3-2.jpg

I'll make a more "official" count of lights at a later time, when we have more thorough images of the new back AS IT APPEARS IN THE GAME not as it appears in a football commercial.

I just wondered if anyone had taken the time to count them on the H3 armor.

Yeah, that was me. I was actually gonna count later today and post but ya beat me to it

my count was based on watching the newest trailer once, so mine count was way more unofficial than yours. I didn't notice the two chest lights on the released mp pic until you pointed it out. nice post.

should we also talk about the leg compartments that open up to reveal guns?

There was a holster on the Commercial, I think, or at least it's what everyone's been talking about. I haven't bothered to confirm it myself yet, and everything else just kinda' shows guns sticking there against the thighs.

The closest thing to a "compartment" would be that there's an eyehole type assembly where you could put the gun against your thigh and have a "bolt-head" (or something similar) go into the larger part of the hole and then slide it down into the smaller portion of the hole, trapping it from falling out. It's the kinda' thing you see on the back of wall mounted phones, and some picture hangers.

This thread is about armor lights though, unless you mean there's lights there too?

ok..off the light thread of this..

Adam.. the link dead had, http://www.bungie.net/Games/Halo3/SlideSho...ots&slide=9

The Red guy has a SMG on his leg, if you look at the upper outer thigh, there is a slot/keyway for weapons to fit on.. slide down lock in with a tab type attachment on the wepaon.. though it must be a twist type lock..due to jumping and rolling would pop out the weapon.. I guess...

So there would be multi spots to put those "slots" for items/weapons... and set up kind of like the quick draw holsters I have seen used in the past... Unless you were thinking of Robocop with his side arm being internal to his thigh..
ok..no more hijacking of your post dead... sorry...

Deadguy: Thanks a bunch for your analysis of the light scheme, it will be very helpful for those of us who want to fully light our suits. I hadn't noticed the new lights under the pecs on the chest. I did have a question though. The Halo 2 armor had lights on the back, in the little 3 louver cutouts. Are they in the H3 suit too? 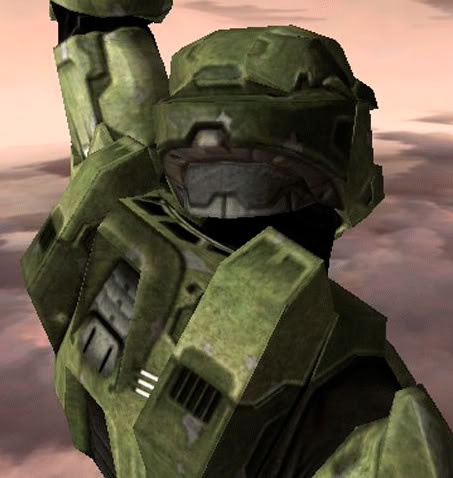 Sorry to chime in on the off-topic discussion, but yeah, Adam, I've seen the leg compartments too, in the Halo graphic novel. On the second page of "Armor Testing" (page 58) theres a picture of Maria in Spartan Armor dropping from a Pelican in orbit with her SMG's tucked into pop-out compartments on each thigh and a sniper rifle slung across her chest. I always chalked this up to 'artistic liberties' being taken by the illustrator, but Bungie didn't have any problems with it. They may have just been in the beginning stages of deciding how to mount the guns to the armor in some fashion and din't want to rule anything out.

I have to say though that when I saw it I was pretty excited at the prospect of engineering those pop out holsters, but I guess they for whatever reason they reconsidered and went with something simpler and mounted they to the sides of the thighs.

I also find it really amazing that BlindSquirrel had already beaten them to this decision back in 2005 when he put his SMG's on clips that mounted to the thighs of his custom built armor (Way to go Squirrel!) When I saw the first shots of the guns mounted to the things I immediately thought of him. Check out how he did it in his tutorial from 2005-10-30. http://mydumbprojects.blogspot.com/2005_10...ts_archive.html

I haven't seen enough images of the back to confirm or deny the H3 back lights. It's hard to find those pics, except in the trailers, and/or where it's brightly lit. *UPDATE* I can say THIS though.. the H3 teaser trailer showed NO armor lights at all, not even the shoulder ones, and the back, at that time, had no slots in that position.

Also, there's some at the base of the calves.

One interesting thing is that the light panels seem to be of a color that is similar to the rest of the armor. Some are, some aren't.. I think it's like that to make it match the rest of the suit in regular lighting levels, or is that just me? On the campaign suit, the shoulder lights are white. On the mulitplayer suits (the blue suit and the orange one at least) the rest of the lights matched the armor color.

Southern Regiment
love the nip lights might do those also

Of all the back pics I've looked at, none have any lights visible at all. That seems a little strange since they're used so that you can see opponents when they hide in dark areas. In terms of programming, those sections are merely the armor color with zero shadow effect on them, and lit to an almost white-out level.

Southern Regiment
chief is lite up like a x-mas tree

love th lights on where they are placed at (might just add them in on my next helmet)..nice find

So whats the count now? 19 including helmet lights?

I gotta' say though.. there's two areas on the back where I suspect there might be some but have no proof of it yet because I haven't found a good angle to check it out from on a picture that has the other lights showing.

(The teaser trailer doesn't have any armor lights on it at all).
R

ah, i fogot to count the codpiece. the other 6 are the 4 "LED" lights on the helmet's front. and I think there might be two lights above the holsters, similar to where they were in halo 2.
http://www.deadguy.net/h3ref/japan-halo3-2.jpg
look at the blue in top left. see where i'm talkin about?
Last edited by a moderator: Feb 25, 2017

I thought I'd already looked there, but I guess I got sidetracked by finding other ones or something. I started this post saying "naw.. that's not one." but when I pulled up the other pic to use as proof, I'm sittin' there like "I'll be damned..."

I think by looking at the new videos the guns are held in place with a magnet more like a electronic magnet so only MC can take them of just a thought I'm looking forward to when they start playing the adverts in the UK.

So which one of you is going to work on and make up the most detail accurate H2 suit in all the land?

Well, I think we're all gonna try, though I'm sure various things will come up to stop us from hitting it 100%. Maybe I'm just speaking for myself here, but I want as much accuracy as I can muster. I mean.. why not? If the information is availible, why choose to ignore it?

If you aim high, and hit as close as you can, then you did your best. If you just decide to ignore stuff, you're compromising your end results. Of course there's nothing wrong with doing an artistic suit too, it's just not for me.. I'm no artist.
R

Deadguy said:
Well, I think we're all gonna try, though I'm sure various things will come up to stop us from hitting it 100%. Maybe I'm just speaking for myself here, but I want as much accuracy as I can muster. I mean.. why not? If the information is availible, why choose to ignore it?

If you aim high, and hit as close as you can, then you did your best. If you just decide to ignore stuff, you're compromising your end results. Of course there's nothing wrong with doing an artistic suit too, it's just not for me.. I'm no artist.
Click to expand...

i am currently working with the NAS suit so I have gone for the more artistic approach even though i have been considering re-forming it to be more accurate. my goal right now is to finish some other costumes, then maybe take a crack at an accurate h3 suit.
Last edited by a moderator: Feb 25, 2017
B

I just started converting my molds to the Halo 3 look....the helmet should be done within a couple weeks and the rest of the armor a little while after that.
R

since you posted this here, does that mean you will have 19 light holes in the armor?