Colonial Regiment
Looks great man. From the previous photo with the turret. Youll definetly need some muscles incorporated into that undersuit string bean. But hey that can be pulled off. You already have the height which some
Of us lack (me included)

SI3RRA 117 said:
Looks great man. From the previous photo with the turret. Youll definetly need some muscles incorporated into that undersuit string bean. But hey that can be pulled off. You already have the height which some
Of us lack (me included)
Click to expand...

If only ONI had selected me for augmentation...

If only ONI had selected me for augmentation...
Click to expand...

Skinny AND ugly........2 strikes against you so that is probably why you weren't selected.

Dirtdives said:
Skinny AND ugly........2 strikes against you so that is probably why you weren't selected.
Click to expand...

This is why I haven't started a Spartan build yet.... too many strikes against me. Skinny, ugly, short and Asian. 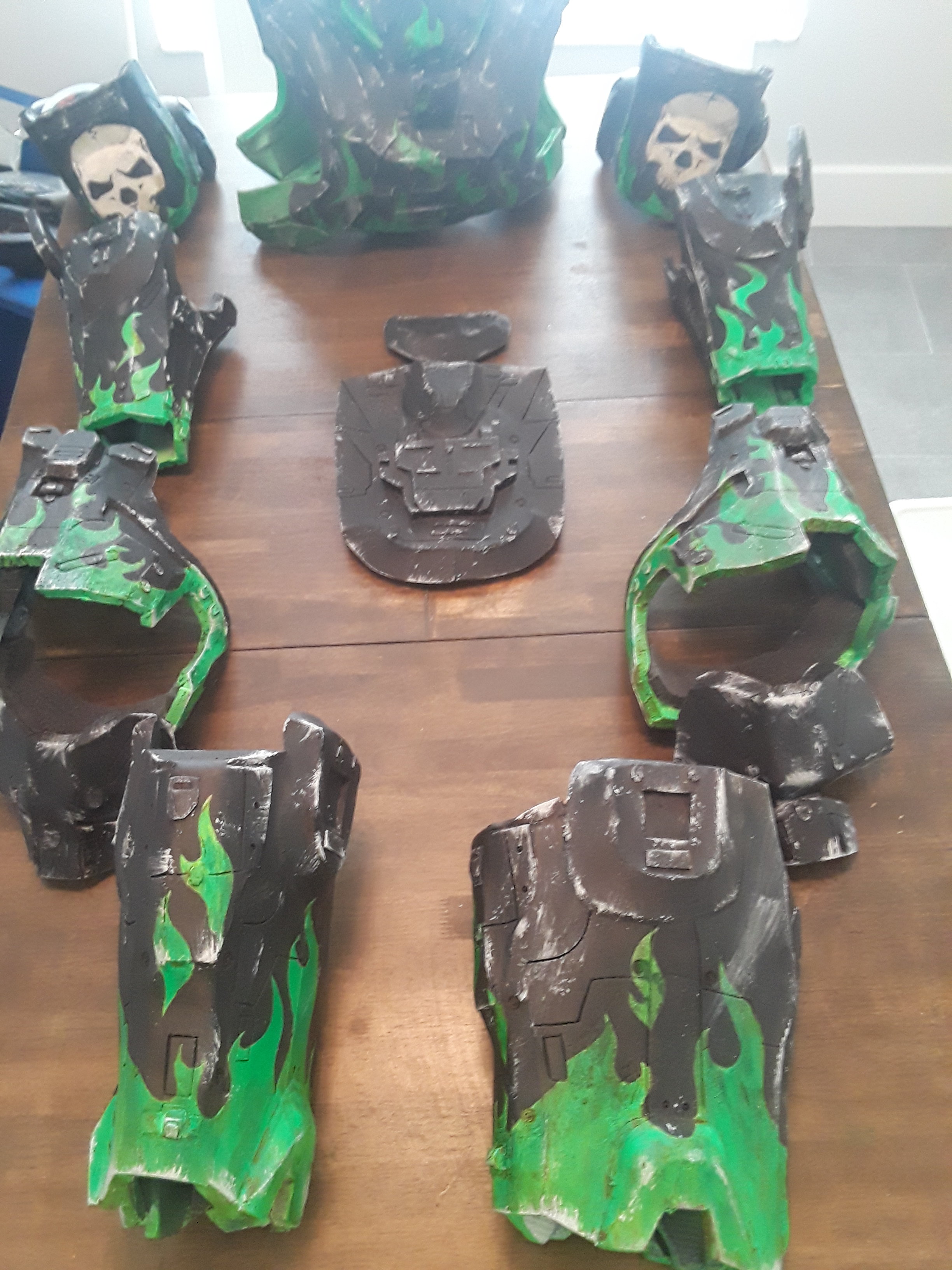 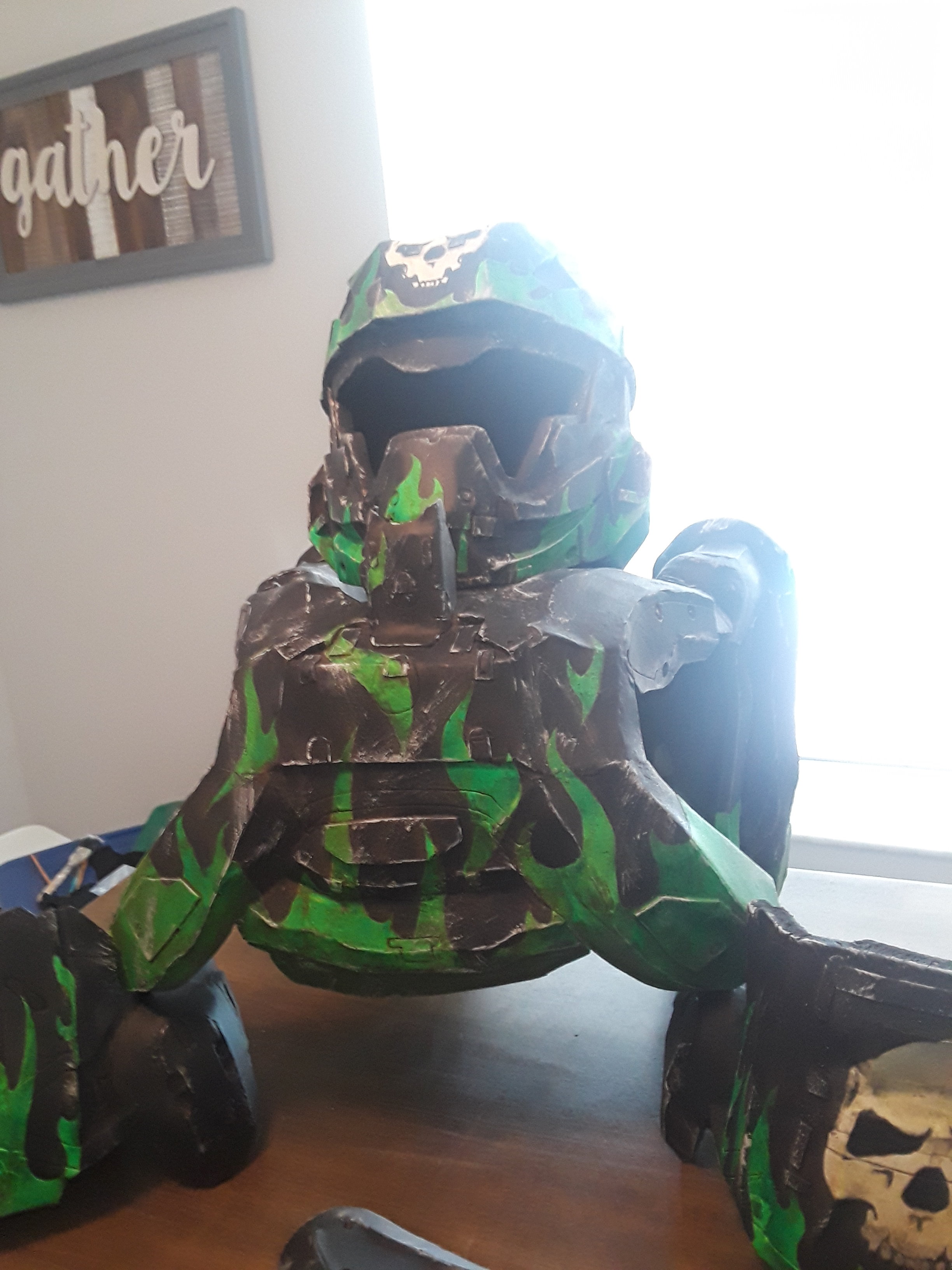 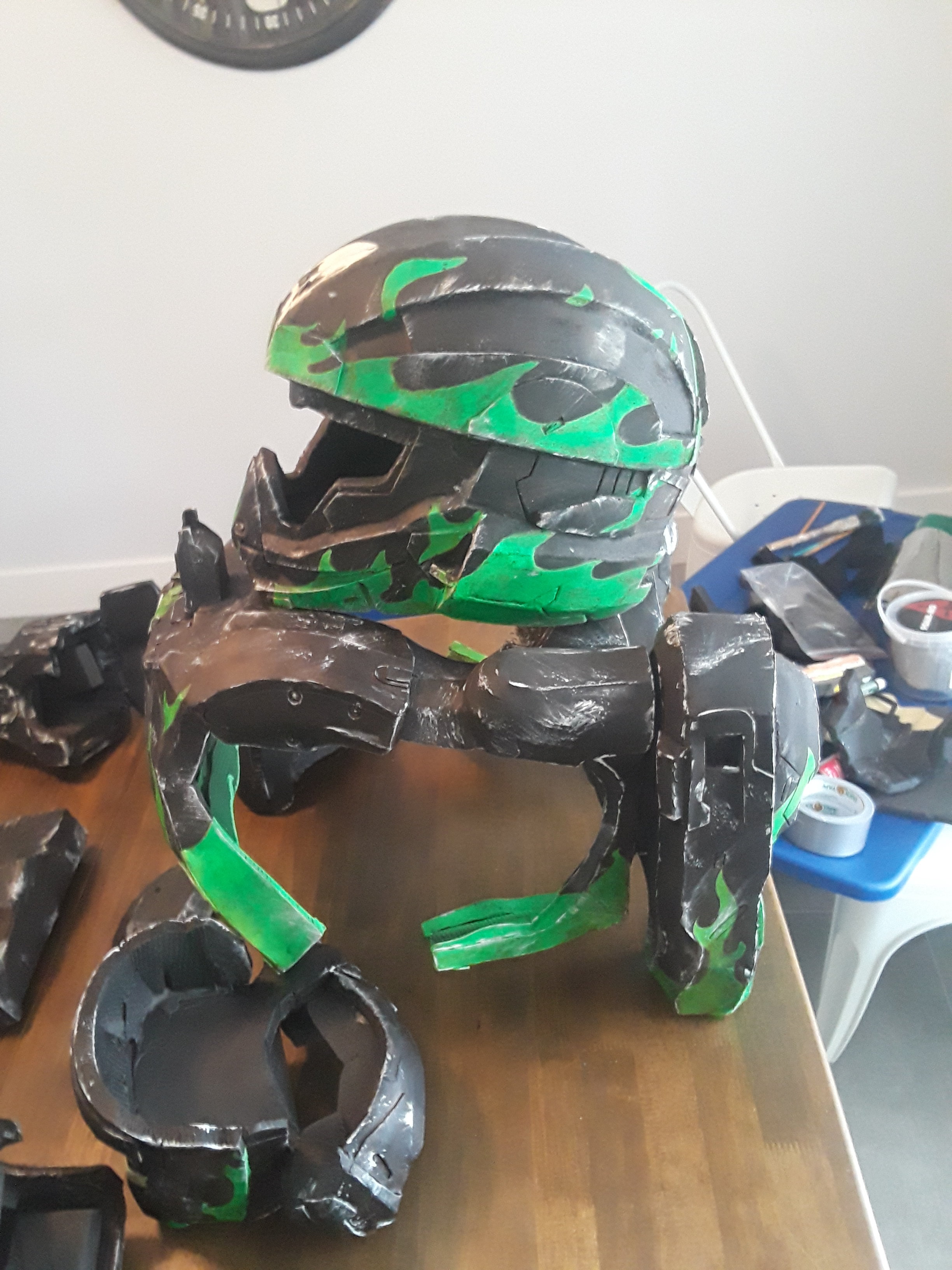 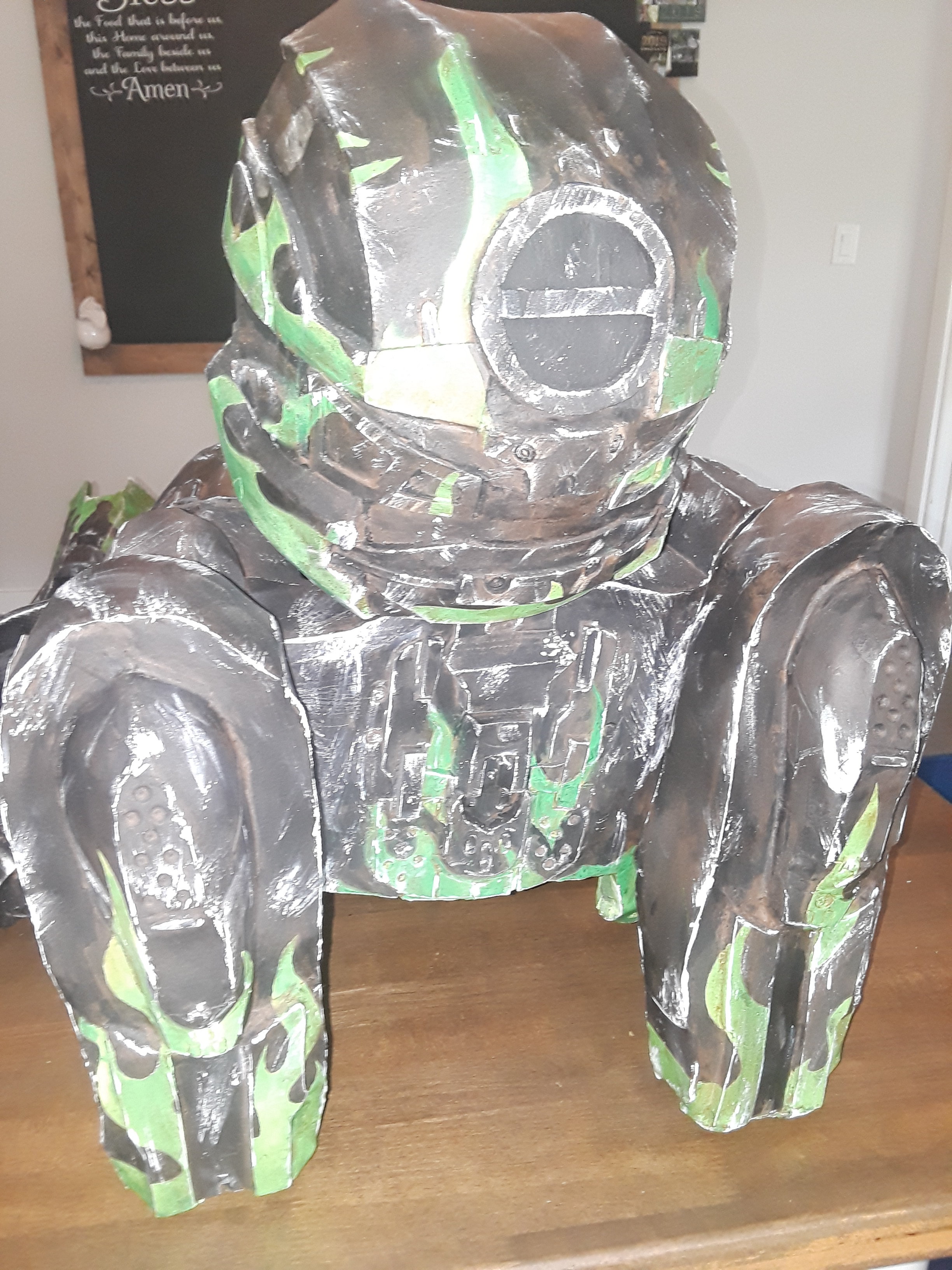 When I was building the chest, it came out weird for some reason. No idea why. I didnt skip any peices in the file, and I cut them all out to size, but the back was collapsed and the thrusters were almost makeing a 90 degree angle. 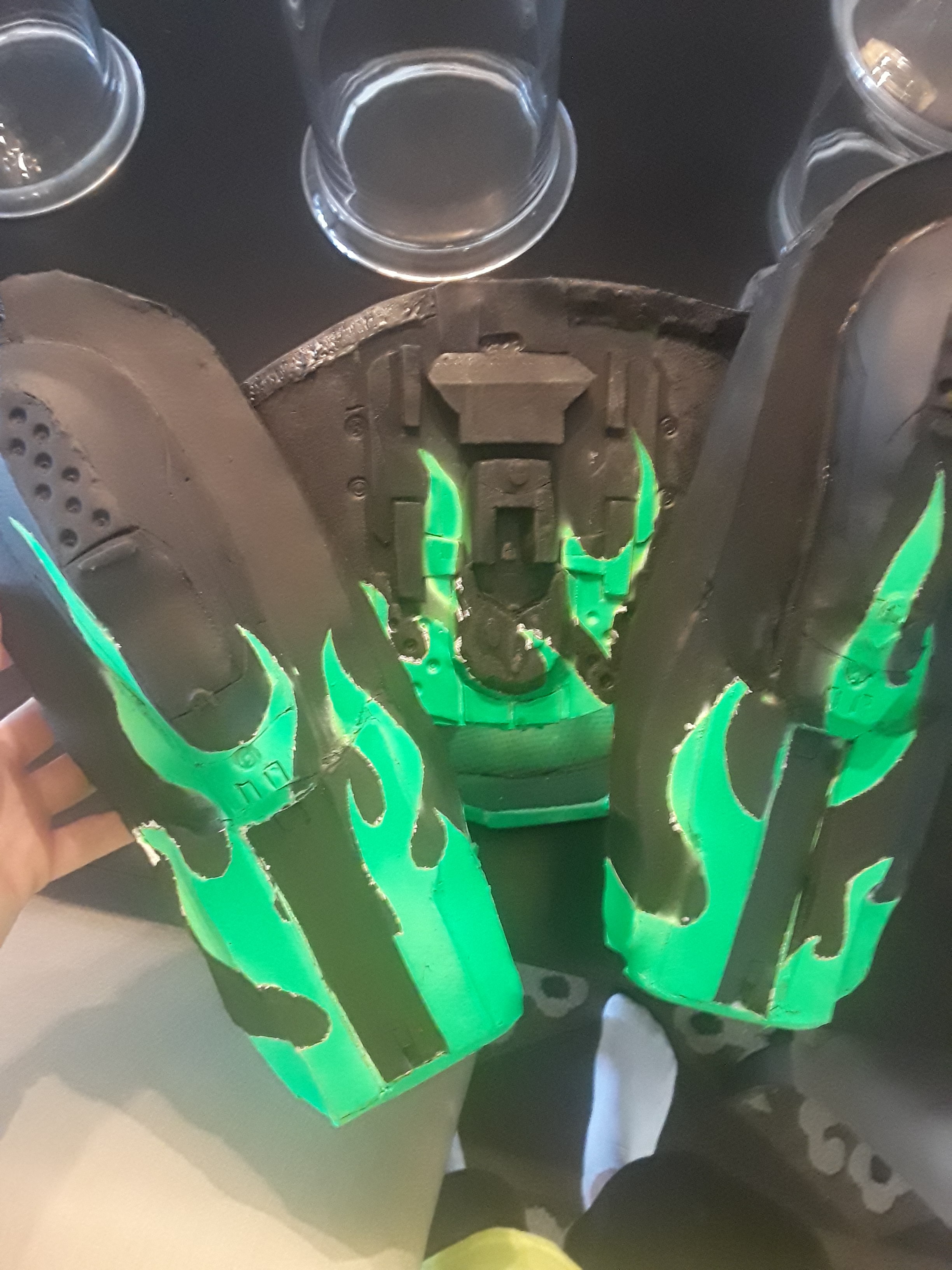 I thought I would shrug it off and deal with it later or think it's ok and doesnt need fixing. I must have been crazy because that looks sooo bad! I took a look at it a week later and I noticed something even worse... 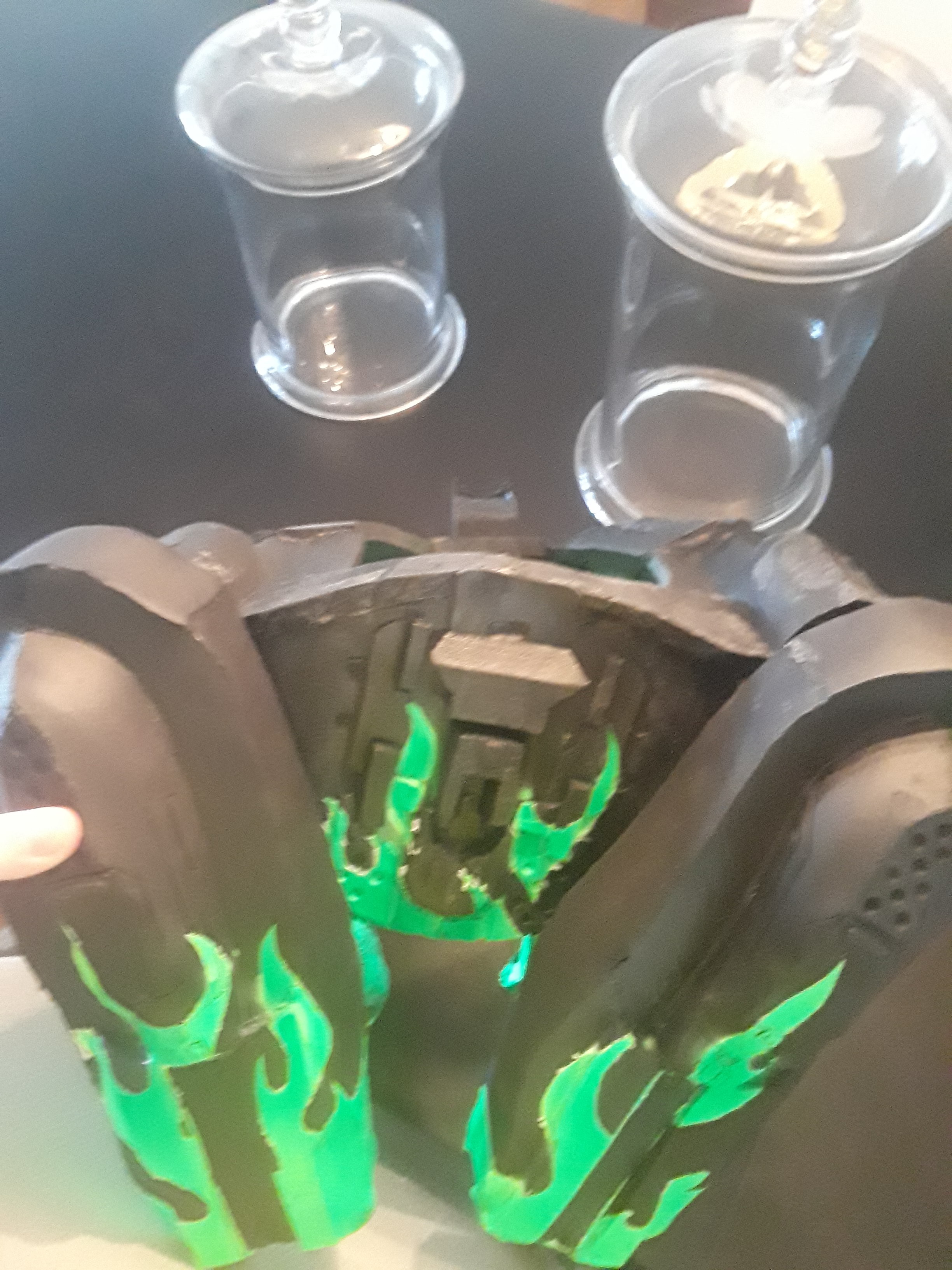 The thruster on the left that was angled, was actually straight and the rest of the back was crazy shrunk and twisted, to where it was no where close to being aligned with the front half of the chest!!!!

I cut two lines down the inside of each thruster, and not only did that straighten them out, but fortunately for me, made the two sides parallel and perfect! 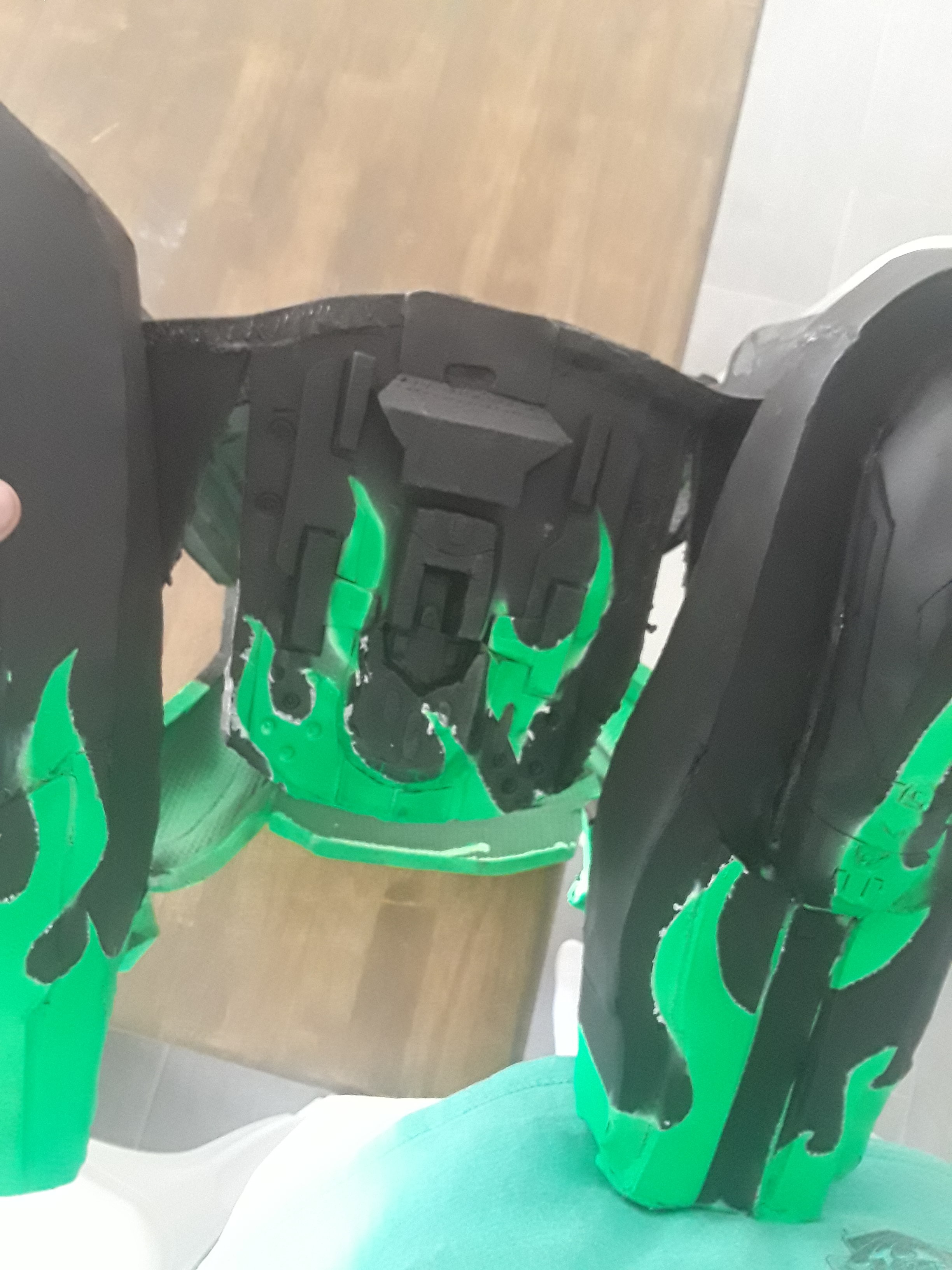 Traced those gaps out onto some foam, cut those wedges out, and BAM! PERFECT! 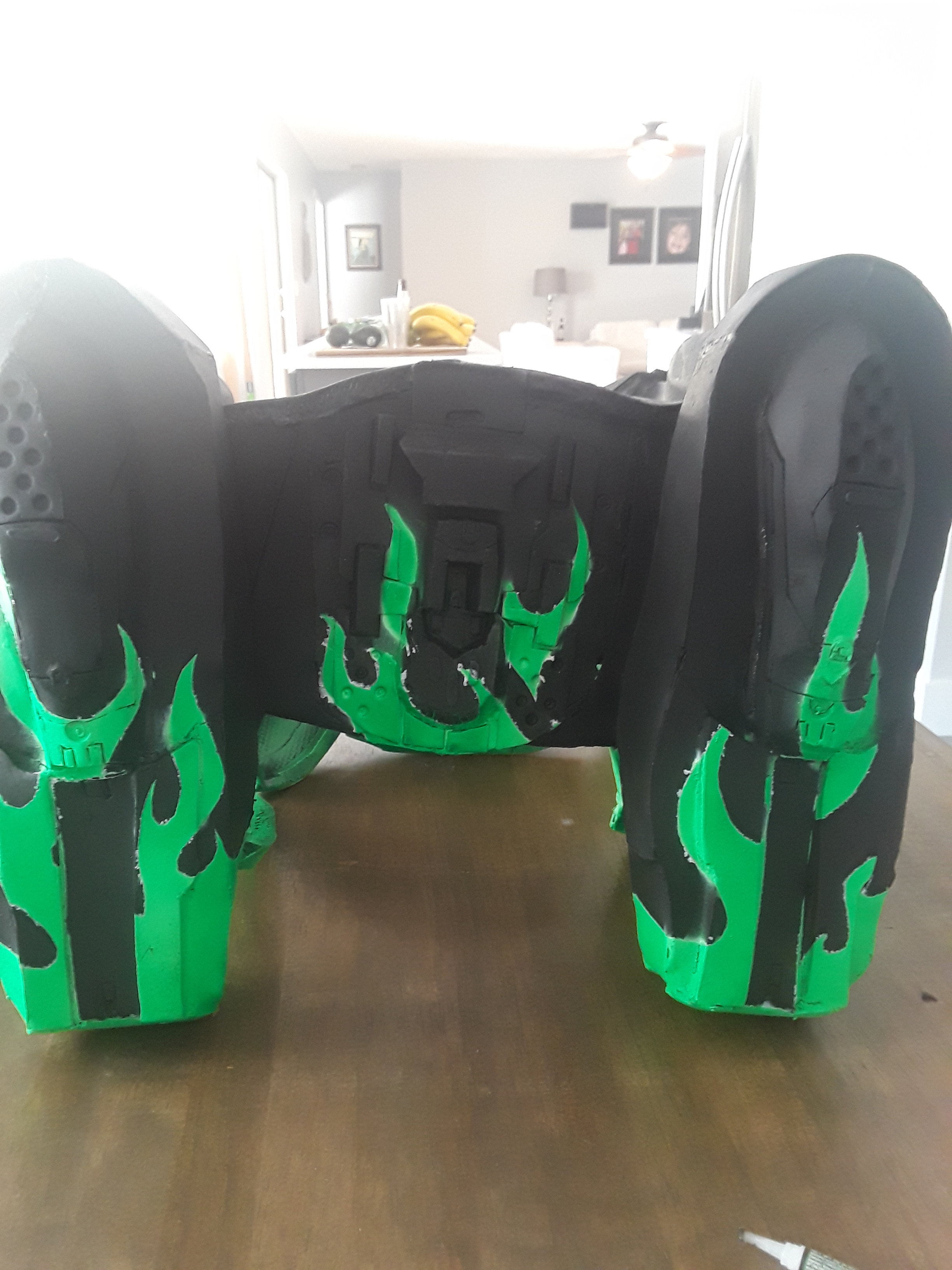 I then fixed some of the seams and raised edges, and painted. Noone would ever know there was a problem! 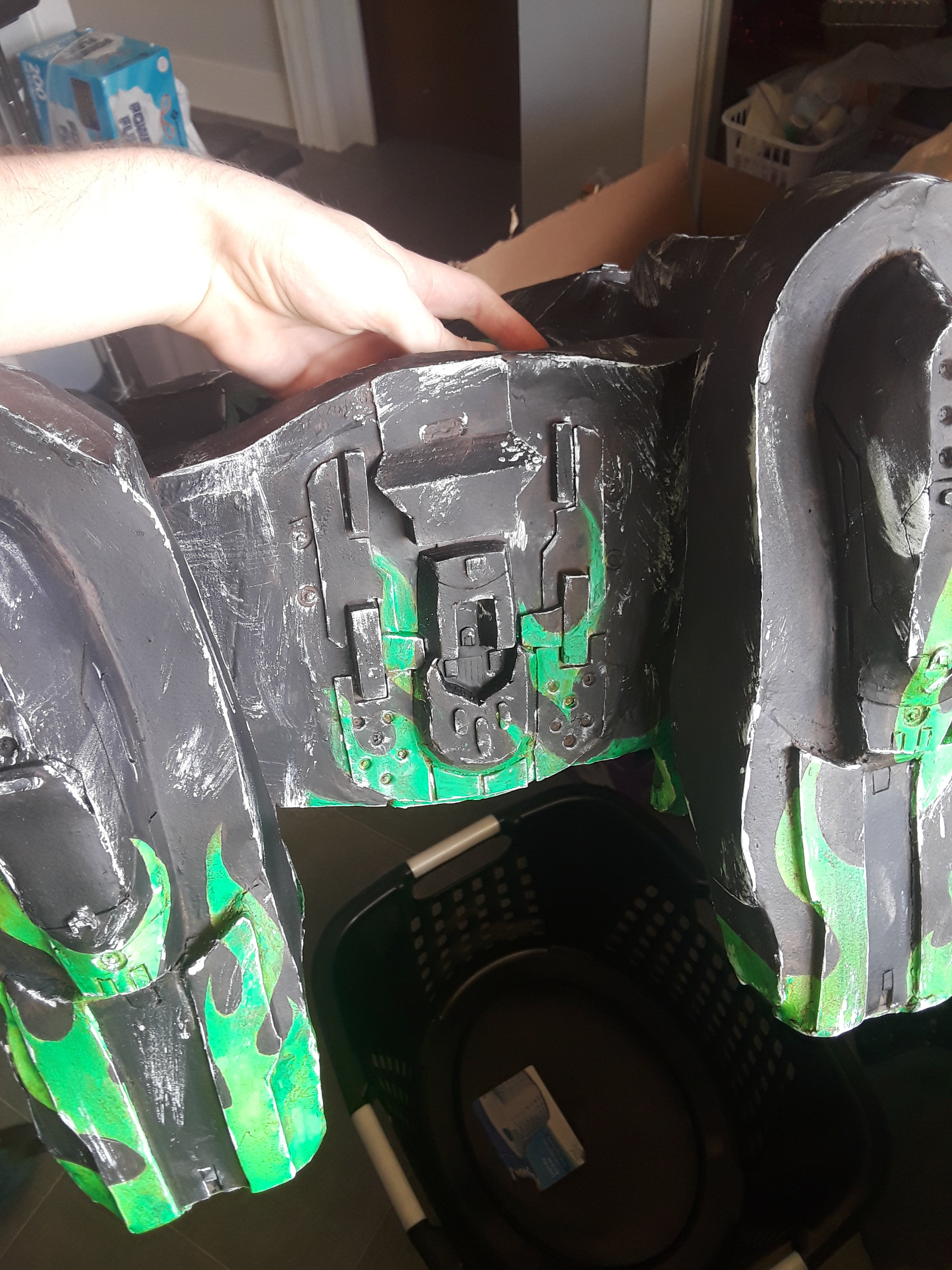 Now just have to finish my undersuit... in about a months time...

Should be easy right?

Colonial Regiment
Coming along nicely. Any ideas in the works for the undersuit?

SI3RRA 117 said:
Coming along nicely. Any ideas in the works for the undersuit?
Click to expand...

I have had a black morph suit I was going to somehow attatch craft foam to using latex and velcro, but I think I am loving how clean turbocharizards daisy build came out, I may just start from scratch, or somehow sew the fabric onto the morph suit...

Southern Regiment
Sorry for the double post, but for those of you that have a halo 4/5 suit, how comfortable is it to wear your shoulder peices? I'm sure it may be the same situation for the other armors from the games, but it looks like the peice that wraps around your bicept clips ingame, and I test fit the shoulders on with the chestpeice, and they hit the bottom "strap" parts on the torso perfectly so that I cant put my arms down all the way. What have yall done about this? I noticed the pictures that Sean Anwalt just posted in his cheif thread, and it looks like one of them where you are walking and the camera is facing you dead on, it looks like you are in a pose between normal and the take on me dancing meme...

xXDashIVXx said:
t looks like you are in a pose between normal and the take on me dancing meme...
Click to expand...

I actually don't have much problem with my arms, though I find myself being exceptionally cautious with them for some reason.

405th Regiment Officer
Colonial Regiment
Community Staff
No one will ever know that there was a problem.......Until you told all of us......just saying. Looks great though. Fantastic job.
Last edited: Jun 3, 2019

Southern Regiment
Mmmmhhhhhmmmm... take a look at that picture again. One thruster is at a 30 degree angle and the other is a 45! They are an inch away from touching at the end! Surr, whatever it's perfect right? I am no ExCeLLuR8

Dirtdives said:
No one will ever know that there was a problem.......Until you told all of us......just saying. Looks great though. Fantastic job.
Click to expand...

Southern Regiment
Sooo... three weeks till Halo outpost discovery orlando... what's a better thing to do that to build an undersuit!?!?

I was going to put the j jonah Jameson gif of him laughing and then saying you serious, but that last part is cut out so I guess here is a text... we are all disappointed.

I got someone to ductape me. I used old PJs that were old and too small for me. A few inches on my wrists and ankles were exposed because there wasnt enough clothing, but I can fix that later. Turns out duct taping yourself in super small and tight, hot pajamas in summer, IN FLORIDA, is a terrible idea. Especially if you dont have any air blowing on you. It was getting hot and my sister was being my sister and refused to give me my ice cold water sitting a few feet away from me, and j couldnt drink it because my arms were ductaped stiff. I started complaining and I was told to stop being a baby and that she has had worse... boy did everyone's faces change when I went white, lost most of my vision, and fell onto the couch XD worth it! We were trying to get this done as fast as we could anyway, but now the hard part is over... I think.

Also apparently all my pictures are gone...

I have spent most of today drawing on the tape the pattern. I am only doing half, so that hopefully everything in the end is symmetrical. I am mostly done with this stage, and I have the fabric in. All i have to do after this is cutout every peice as if it was a pepakura file, trace each peice onto fabric, and sew it... just like foam right?

Well... like a wise man i once met at the southern regiment booth this year at megacon said, any time you arent spending before an event, is time that your work could have been better. Or something like that XD 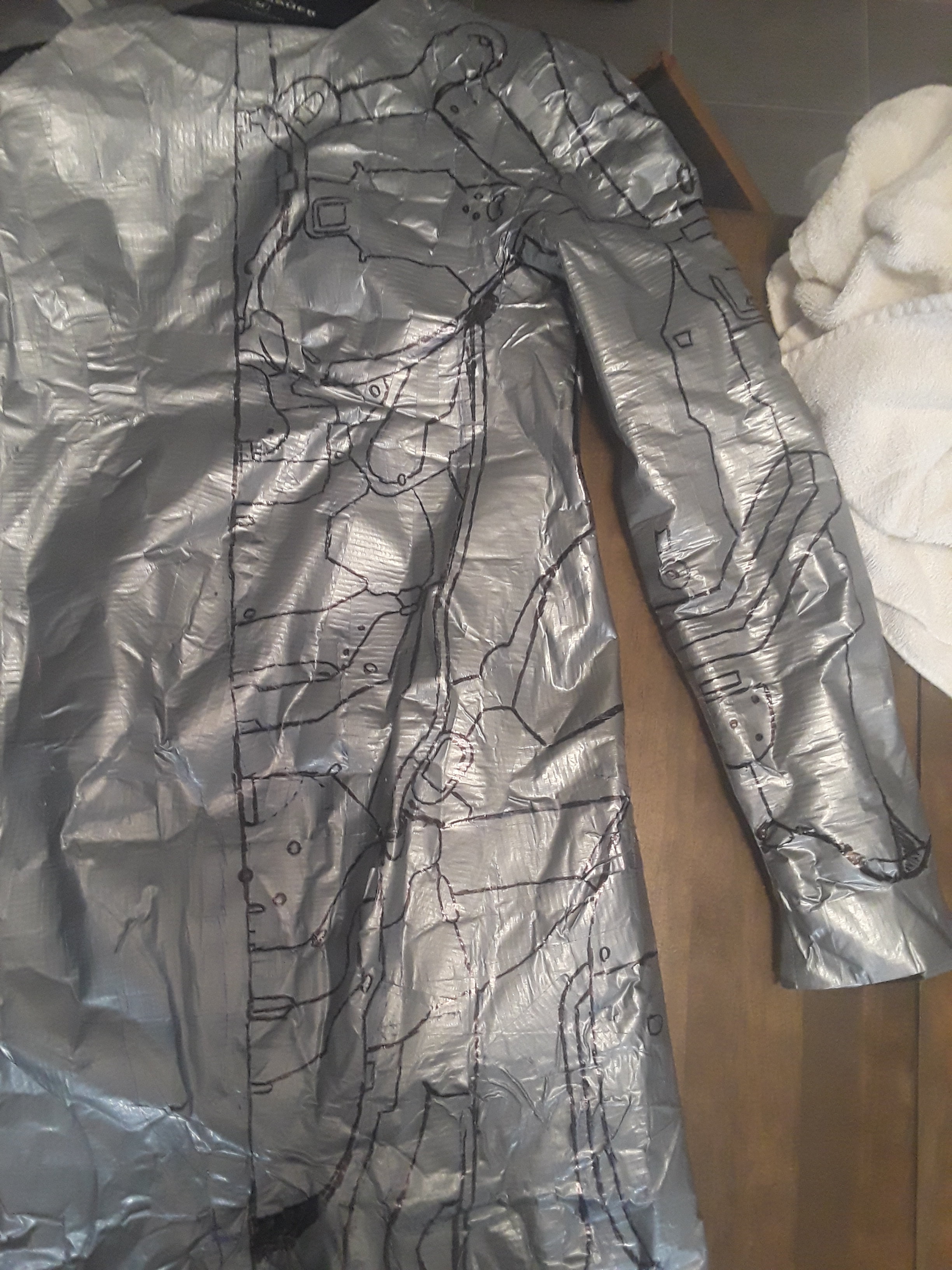 Southern Regiment
With outpost discovery on the horizon the whole southern regiment is on crunch-time. Dude you weren't giving yourself enough credit when you posted on my thread, that armor looks great! We'll definitely need some pictures together when we're working the booth.

Southern Regiment
Update on the undersuit:

I feel very happy with how this is turning out. Sure there are some seems and folds, and a few slots where it is not perfectly symmetrical, but I am very pleased with how it looks so far, especially since I have never used a sewing machine before a couple days ago. I started with a few handmade scrap pieces to learn the ropes, and then did the cod peice. It turned out ok, but I made another one and I thought it looked way better. I was going to sew the chest like the rest of the suit will be sewn(with tiny cutout shapes making the intricate design), but because the material I decided is going to be the front is almost like a faux leather, I am going to try and stamp in the detail. Does anyone know if this will work? I'm pretty sure it should...

Because I am pretty new to this, if anyone has advice or sees something i am doing wrong, please tell me. Rhe outside looks great but the inside is pretty spooky looking. Lots of thread... 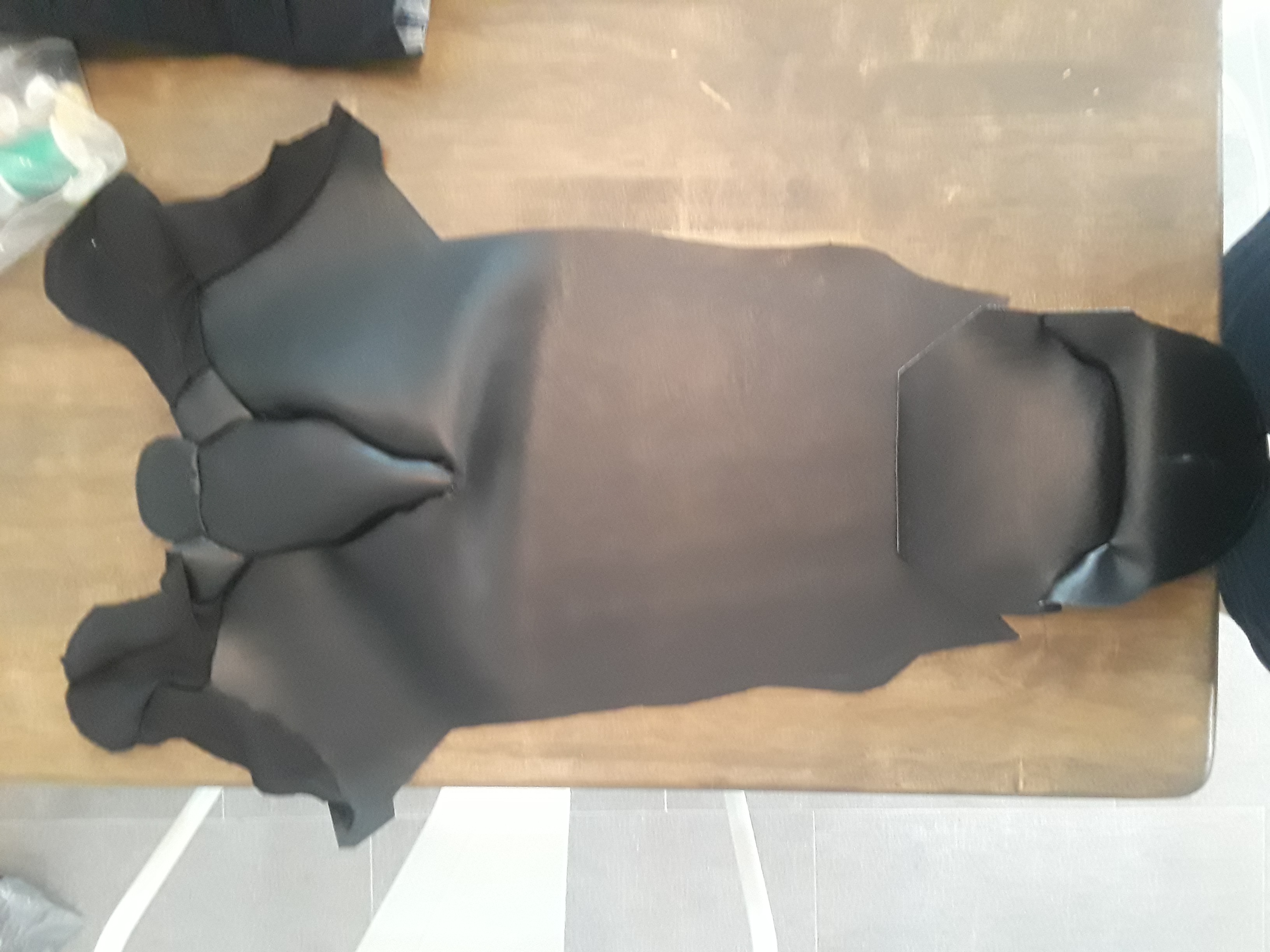 So... I thought I had three weeks till HOD, but I checked the calendar, and ooooh boy. I only have 14 days left starting tomorrow... I have to work work work and take no breaks. I already feel sick and my mind wants me to stop, but my mind doesnt know what's best for me, and what's best is a full suit! I will not be on the forums as much because if this, but who am I kidding. I will probably pop on the site regularly like I am now. Even though I just dont have the time and should be sewing instead... welp, time to get back to it!

Midwest Regiment
It looks pretty damn good for a first time build, alot better then mine

Midwest Regiment
Lookin good xXDashIVXx!
Though, idk what the 405th would be like without xXDashIVXx there to like all my posts.

Southern Regiment
Little under two weeks to go until the con. 12 days to finish the suit... the plan:

Make the ductatlpe peice shown, and another one for the other side. After that, I am done with the torso. I then have to make the arms and legs. I wish I had more time, but in order to finish, I have to make each limb in 2 days time each. This means I have to work every waking moment without break...

That gives me one day to stamp the details into the faux leather scuba fabric, and one day to sew everything together to make it whole... plus velcro to hold up the peices. maybe I'll have time to where the suit all the day before to test how strong it is, but it looks like my first suit up will be the day of the con... I also have to glue the straps onto my right shoe, and glue the armor to my gloves. I JUST REMEBERED I HAVENT SHOEGLUED MY PADDING!!! IT IS JUST THERE BY TINY AMOUNTS OF SUPERGLUE!!! I guess I have to do that too... I may also need to add additional straps to the actual torso armor to hold it up in place, rather than falling back a little bit because of the size and weight of the thrusters, but that is not a priority right now. I think I got this? 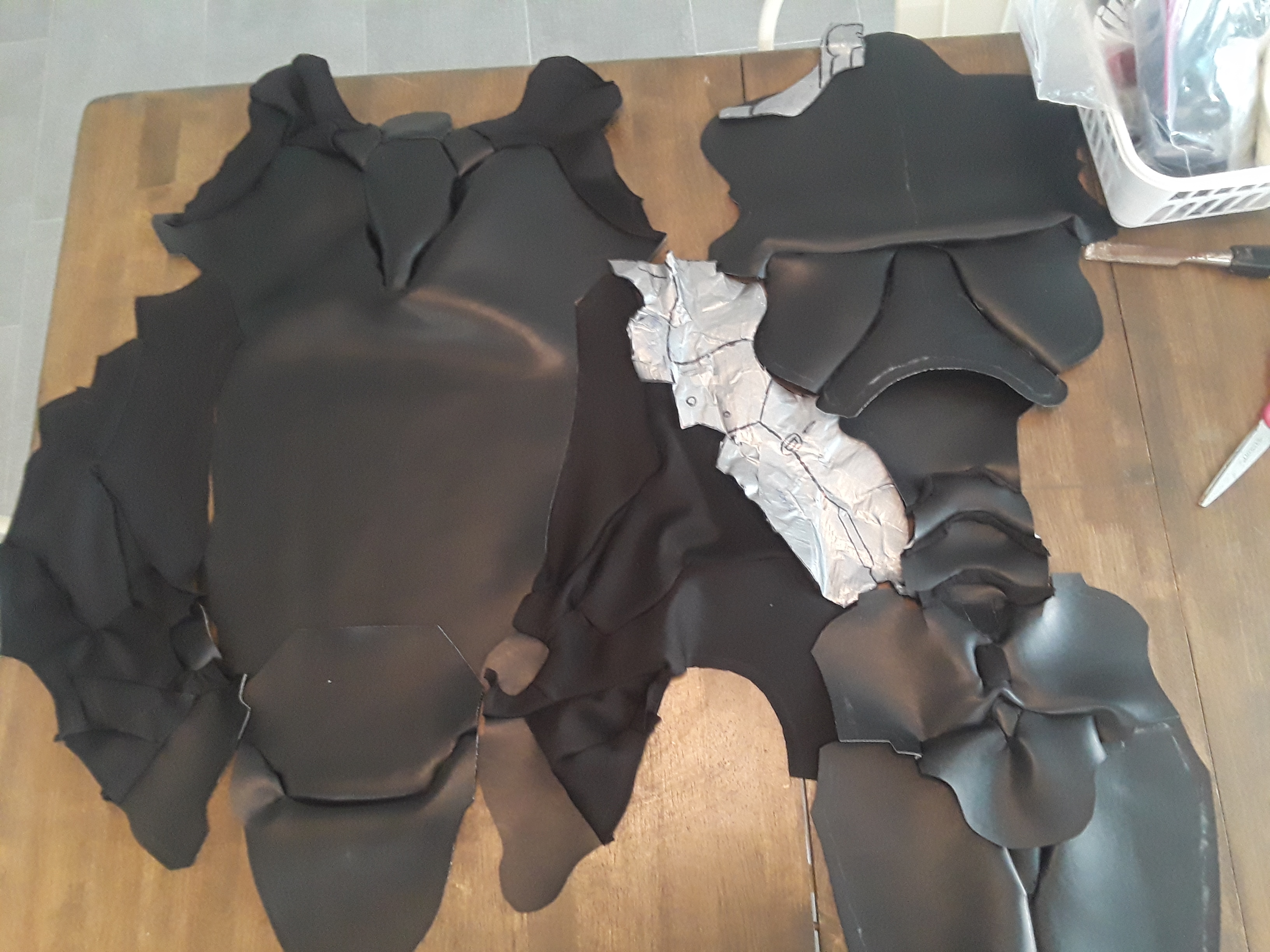 Southern Regiment
So the torso is done, but it is still in its seperate peices. My sisters birthday was this weekend so I missed most of a day of sewing, and then the machine broke. It is fixed now, but I lost maybe two and a half days worth if sewing... I did the arm in a day and a half, and was hoping to make similar time with the other one so I would finish both arms in three days instead of four, but the printer broke and set me back a little... the arm then took two full days instead of the day and a half, and was looking pretty good, but I struggled with sewing the two seperate sides like a jigsaw puzzle to connect them and finish the arm, and a few places turned out wonky. I am not happy at all with how it turned out, and around the inside of the elbow, it is bunched up and all weird. Looks terrible, but I do not have time to fix it so I am just going to go on with it I guess... 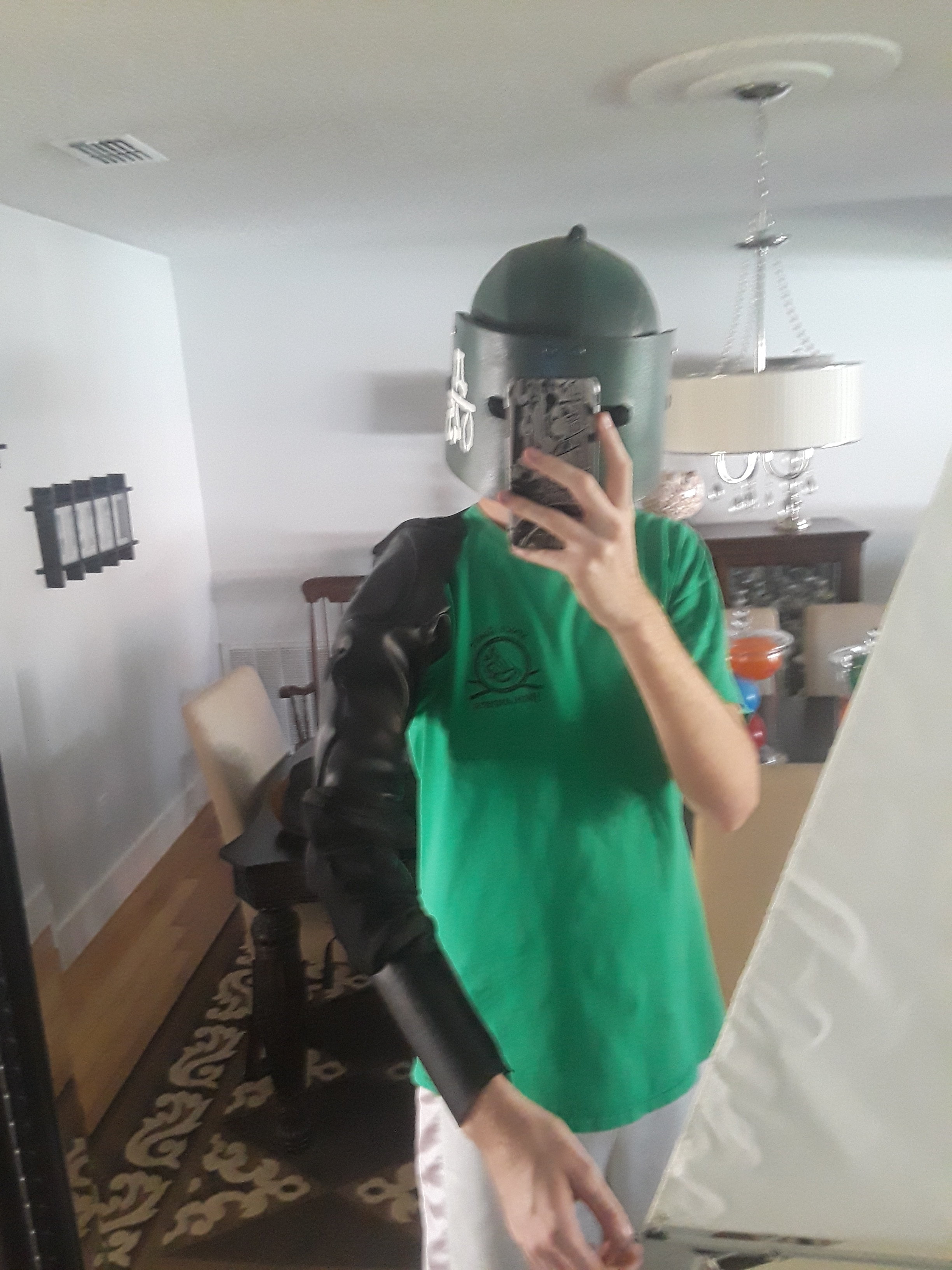 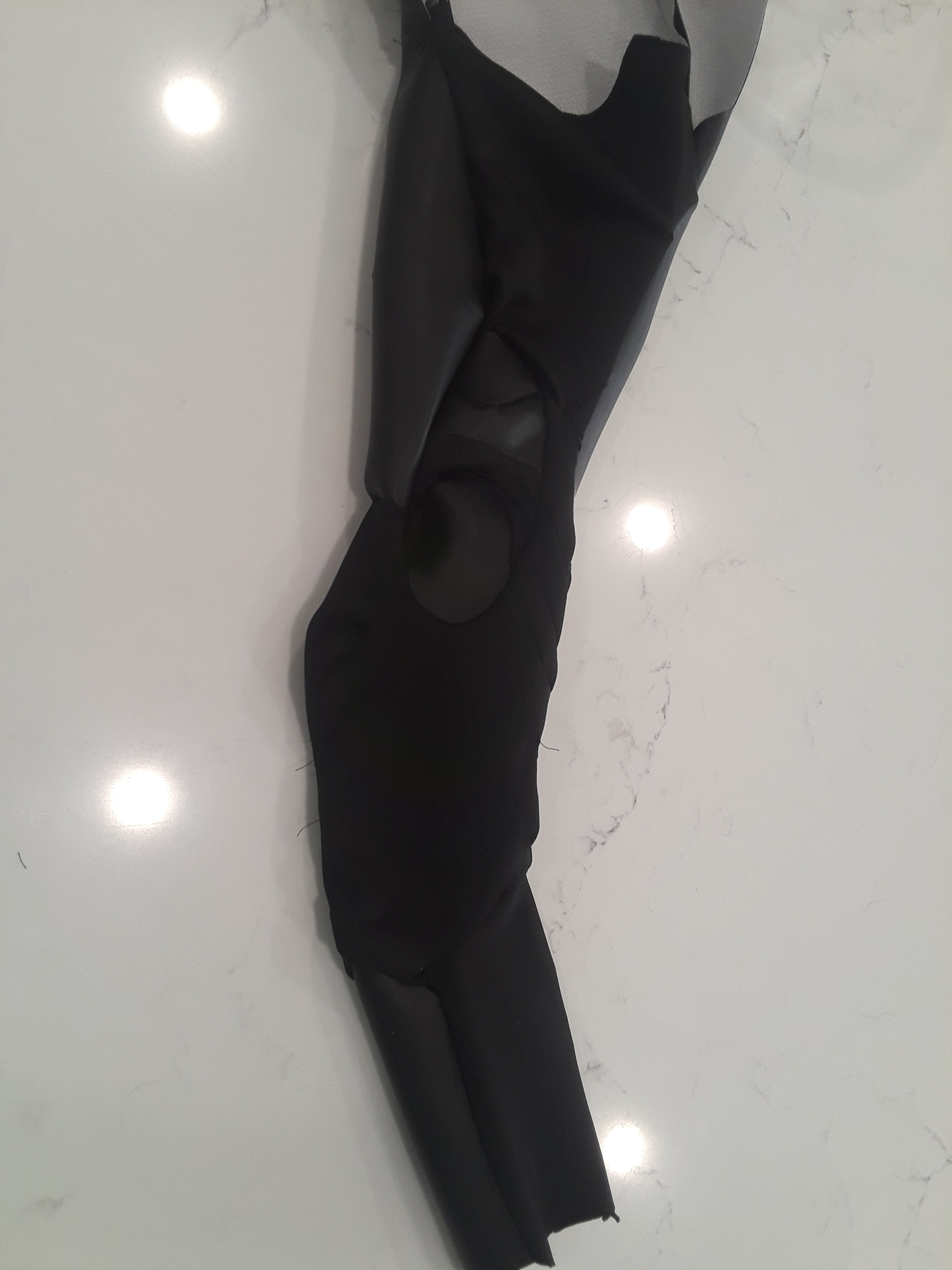 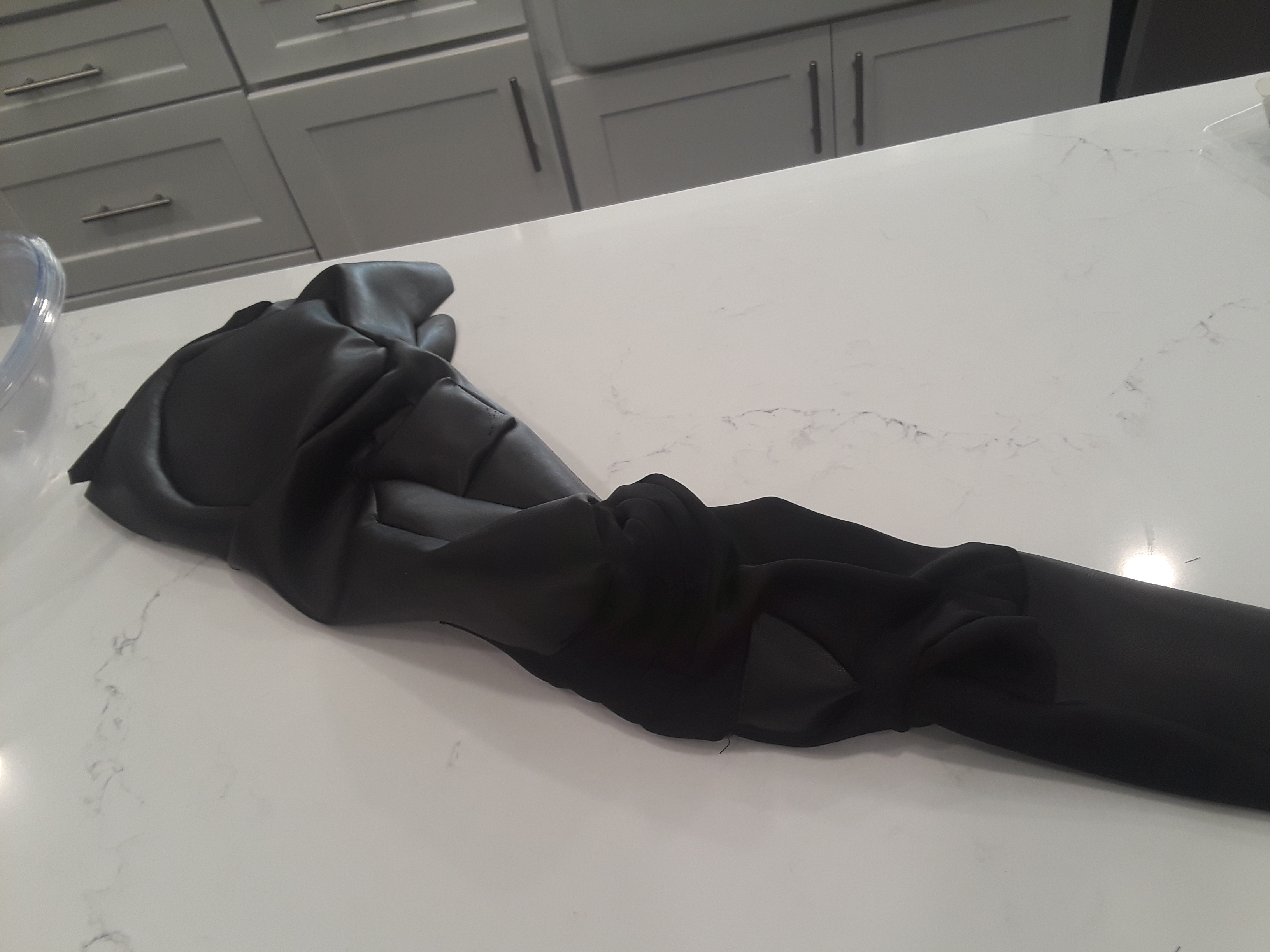 There is this giant porteuding point that sticks out, or sucks everything else into the void and causes lumps and wrinkles when worn...

My Build for the Winter-Recruit Armor
2

Chestplate and general progress update! Help? (Third time is NOT the charm it seems)