(2004, Infantryman Somewhere in Northern Iraq, just after the invasion, Al-Qaeda enters Iraq with the intent to disrupt Coalition forces activities. It turns into the height of conflicts in Iraq with the highest death tolls on both sides.)

Sitting in a small Concrete building with no Air conditioning, 10,000 miles from home in the middle of a country where an insurgency, who’s sole goal is to kill you, is on the quick rise, looking at my M-4 Carbine, loaded, next to my sleep space, asking myself if it was worth going home to what I was going home to? 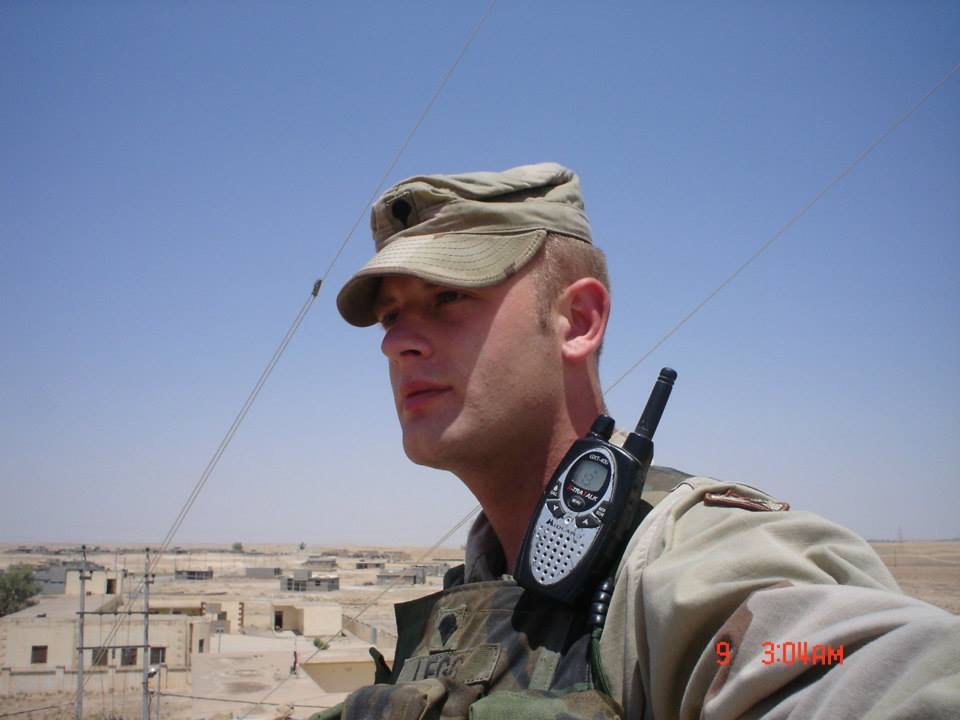 Why do some people believe soldiers have the option to deploy to war when their unit gets orders to deploy? Sounds crazy right? That’s exactly how my story starts.

The pine smell is so rich in the air, when stepping off the airplanes at SeaTac, you get this instant sensation of breathing fresh air for the first time in your life. Cold and Crisp air is what you woke to in the mornings with beautiful sunrises to the view of Mount Rainier’s snow capped top in the distance. Sounds perfect for a newly wed couple to start an adventure. And it was.

My new wife and I had a rocky start though. Here I was, 19 years old, 6 ft tall and bullet proof, entering the world with a new found sense of invincibility, having just recently graduated my 14 week Infantry Basic Training (ITB) at Ft. Benning on Sand Hill. Warriors who knew very little of the warrior world who were expected to be guided by others, just as young with the same, little experience.

You see, 1st Brigade of the 25th Infantry, turned out to be a testing unit. It had not seen any combat, since the Vietnam war, and since, had only been training to fight conventional warfare while testing new equipment the Army was considering for use in war.

Aka: trained to fight Russian military in a force on force fight where Army’s wore uniforms and drove military vehicles.

So needless to say, everyone, from the lowest rung, to nearly the top of the leadership, had no experience with combat deployments.

However, in 2003, when the invasion of Iraq was on the move, the unit was opened up to a new future. One where combat was going to be fought on two fronts. (Afghanistan and Iraq)

So, for the first time in nearly 40 years, the unit came down on orders for combat deployment. This, in turn, activated a large scale training and unit certification board that forced our unit to the field, often, and onto air craft to fly across the nation to NTC and JRTC to receive deployment certification as a unit. All of which, was certification in force on force, conventional warfare.

Time away from home and the family all before needing to leave for a year long tour.

You could see how several newly wedded couples and marriages who had never experienced this stress, could be in the making of disaster.

So here we are, it’s 2004, the initial invasion of Iraq is over, and the second wave of Soldiers (my unit), step onto white buses, to be carried over to the Air Force base across the road and carried to a place nobody in our unit was truly prepared for.

Some soldiers of which, didn’t join in the festivities. They faked injuries, went AWOL, or forced disciplinary actions on themselves, all in order to dodge deployment and forgo the activities.

My wife and I decided however, that it was best for her to have a new car, to help get around our newly born son better. You see, we decided to have a child in the event I was killed in action, there would remain some piece of me in this world. So, 5 months before I deployed, my son entered the world and lived in a beautiful house on post where both my wife and dog would pray and await my return. 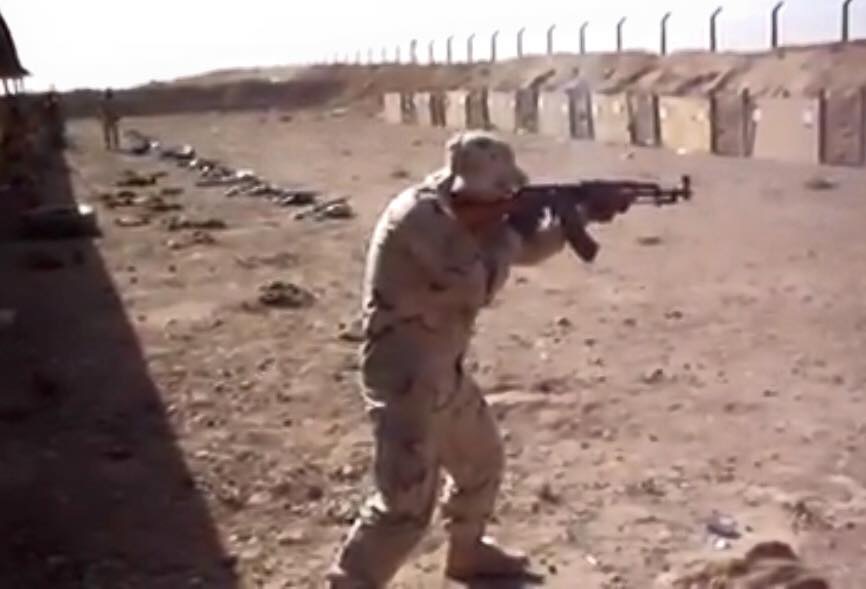 Yet, after being in country for the first two weeks, we were having a blast! I mean, we had to zero up our rifles and well... look at all the AK’s in this country we get to play with now. This was a dream vacation for a, now 20 year old kid.

As we shadowed the unit during 13 hour daily patrols, something happened that we didn’t expect. Where was the enemy? Why wasn’t he fighting in units that were attempting to out flank our positions, or whatever evil enemy conventional warfighters do. And then, it happened.

Being introduced to the enemy for the first time, you’d have thought, would have been this exhilarating moment of action and adrenaline. Instead, while riding in the Stryker, a man steps out in front of us and screams something inaudible into the air with his hands raised and then detonates himself into this storm of tomato paste, spaghetti and freshly baked pizza slices with melting cheese all over the front of the vehicle.

But then the intensity grew.

500lbs artillery shells buried under the dirt roads being detonated under vehicles, coke cans laying on the side of the street, packed with gunpowder and marbles, detonating themselves in ground patrols, pressure plates packed with Semtex and kids approaching you asking for candy, while dropping hand grenades into the vehicles.

A new style of warfare not seen before. Similar to if a Vietcong Gorilla Fighter made love to a Japanese Kamikaze Pilot.... this would have been their love child we were now fighting.

Yet, in the middle of this new fight, casualties didn’t stream....from just this new enemy.... Instead, we were slowly loosing, what was a noticeable number of soldiers, to suicide. The wildcard finally hit the unit.

At that time, I had heard a lot about this new growing struggle through safety briefs given where platoon leaders were asking that we all keep a solid eye on each other for this new threat. That we be “battle buddies” to each other during these difficult times. But, up until this moment, we, as a platoon, had not been introduced to this issue, nor had we seen the signs of what to look out for.

And then it happened... 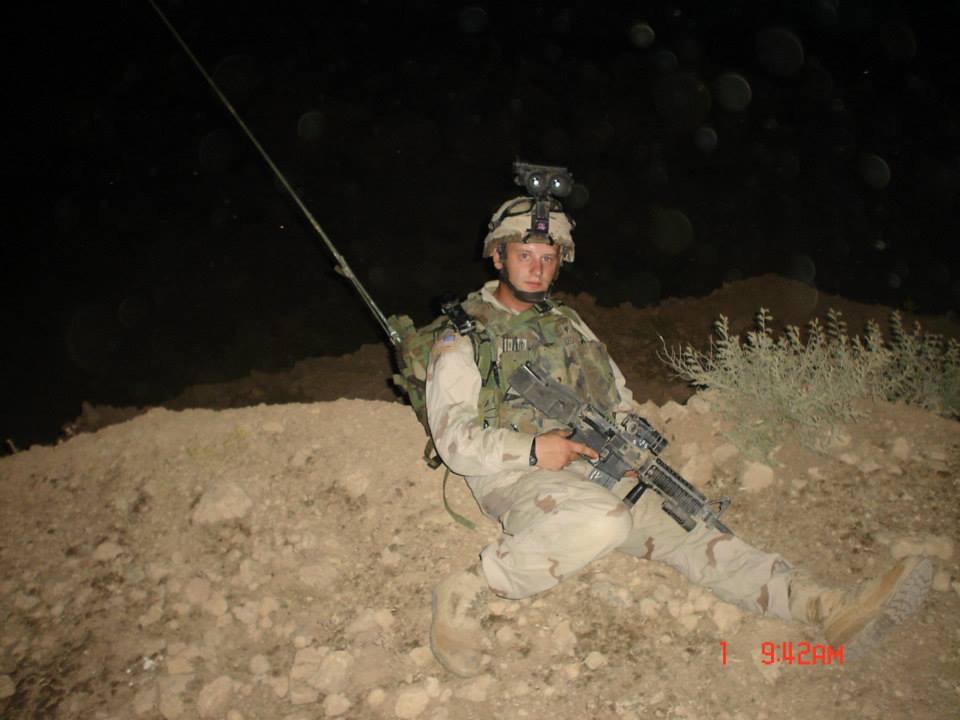 Sitting at a Traffic Control Point (TCP) in the middle of the night, we hear a loud thud come from one of the other vehicles. Suddenly, the ramp lowers and the entire squad comes running out of the back of the vehicle looking like a scene from a horror film. Holding their ears and screaming while soaked in blood, we panicked thinking we were being attacked by, just another new style of weapon we hadn’t seen. When in fact, a fellow soldier had just taken his own life, with a force of violence from the barrel end of a M-500 Shotgun.

It was devastating for the unit. This soldier, had just recently received a letter from his wife, stating she was leaving him. All of us, instantly started worrying about the home front. The untold Ally to Al-Qaeda...our wives.

As we all prayed, the next two letters hit the unit. As you can guess, I was the next.

I can’t quite begin to explain the feeling of disparity, other than to tell you this.... I can still feel that unbelievable depth in my chest of pain and despair, as I felt in 2004 when my “Dear John” letter arrived, today.

The story “f**ked up” as it was, goes incredibly deep, with emails and “MySpace” posts of pictures from my wife that caused the situation to get increasingly out of hand. Looking back, I think she was hoping I’d do it, just so she could collect the $450,000 SGLI insurance if I died overseas.

However, my unit quickly acknowledged the situation and targeted me for some down time and dropped me off at the nearest Forward Operating Base (FOB) for a day. I was told by my Platoon Sergeant (PSG) to decompress and was given $50 by my Platoon Leader (PL) who told me to go to the PX and find some distraction.

So there I was, walking through the aisles of the small PX when I saw it. The image was of some sort of soldier dawned in green armor like a battle tank, pointing what appeared to be a rifle with a Tac light at me. There was another, what I was assuming was a soldier, next to him, pointing a rifle down range toward my general direction. A vehicle, that looked like a Jeep with a 50 on the back shooting at some sort of alien aircraft that was attempting to attack them. The game was called Halo: Combat Evolved.

Reading the back of the game case for PC, it grabbed my interest, and, since I had a laptop back at the Outpost, and we had power, I thought, why not grab it up.

The next week, I was captured. Outside of my 13 hour patrols, I was not 10,000 miles away from home anymore, instead, I wasn’t even myself. I was a special soldier of some sort battling an unknown army 10 billion miles from Earth. I had no wife and no child at home, as I was now 500 years into the future. I didn’t have time to think about the pain, there was only 1 mission in life.....Survival.

Needless to say, the Master Cheif not only carried me through my first year long tour, but also back home.

When my tour was over, and I returned to nothing. My first 48 hours, I was homeless. The, now Ex-Wife, had run back to Texas, after turning over the house back to the control of the post, selling all of our stuff, giving up our dog to God only knows where and having the car I had just purchased her before leaving, repossessed not once, but twice.

The unit didn’t even reserve me a barracks room. So, I was on my own. I took the last of the money I had saved, took a cab to the nearest Jeep Dealer, purchased a 2005 Wrangler, slept in it for 48 hours while I found an apartment. After I received my keys, I went to the store to plan for furniture, when I saw it.

While I was deployed, Halo 2 released, and the mission continued. Needless to say, payday came and the first purchase, besides food, was a tv, Xbox and Halo 2.

And for 2 straight weeks, Master Chief carried my through the suffering of coming home to nothing.

I’ve been with the franchise ever since. Loyal as they were to me, during my darkest hours, in return.

Thank you Chief for reaching down and pulling me out. You gave me a reason to finish the fight.

Sir, you leave me speachless.

The only thing I can say is that you have a family here in geeks who love Halo.

L84, thank you for your service...............I'm also at a loss for words, which is saying a lot (people here can confirm). But I am glad that you found a reason to continue your journey through life.

I'm sitting here at work, listening to classical music, and reading your post doing my best not to tear up a bit.
I sat here for a good moment trying to think of what it is I wanted to say, yet the words escape me.
Thank you for your service, and I hope to see you around the forums more
Last edited: Aug 14, 2019

Canadian Regiment
Wow thats an amazing story! Thank you for your service.