Colonial Regiment
My colleague at work is a huge Naruto fan. A few weeks ago, he showed me this video of a cosplay accessory called Rasengan. He asked me if I could make one. I was very busy at the time so the thought of making one was in the back of my mind...but the flame was kindling. Finally, Projects died down and I had time to take on something fun.


Looking at the configuration of the mechanism, I knew I needed 2 motors(one large and one small the link is different from the one I used, it looks like mine was discontinued), some battery holders(AAA and CR2032), switches (Small and Smaller), LED's, wire, and some modeling time in blender.


Parts are ordered, Let's Blend now that I have exact measurements of the parts.


Solder LED's with Wire across from each other. Strip the wire like the below white one to make things a little easier: 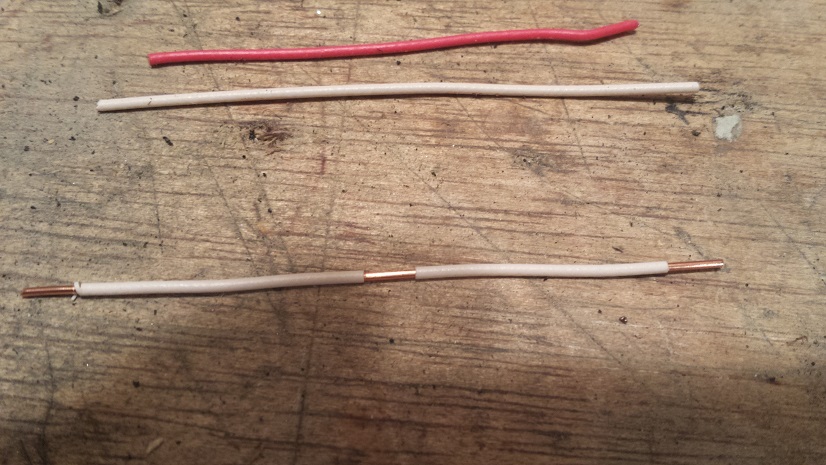 Remember to match the legs of the LED's.


Once you have 2 sets of LED's wired together, Solder the middle of them keeping the anodes separate from the cathodes. Then, I soldered a C2032 Battery holder with a switch on top of the X looking LED configuration. I then attached the entire mechanism to a basic 3D designed base that was made to attach to the small motor. 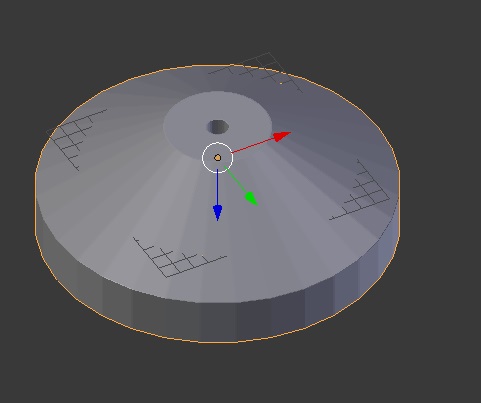 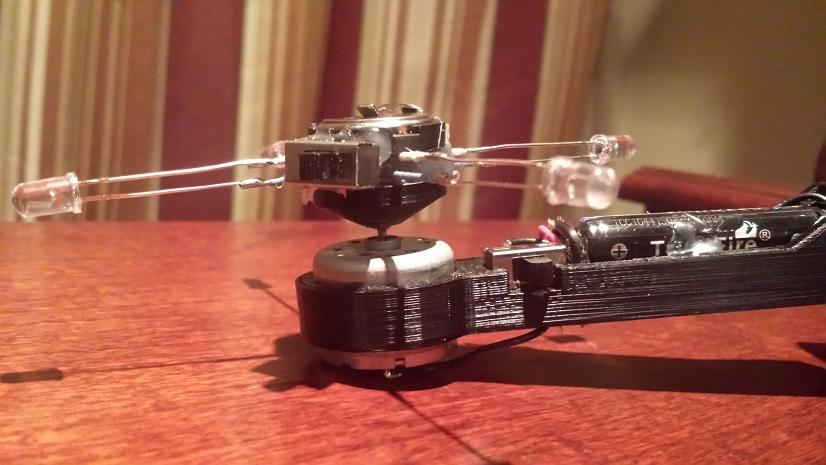 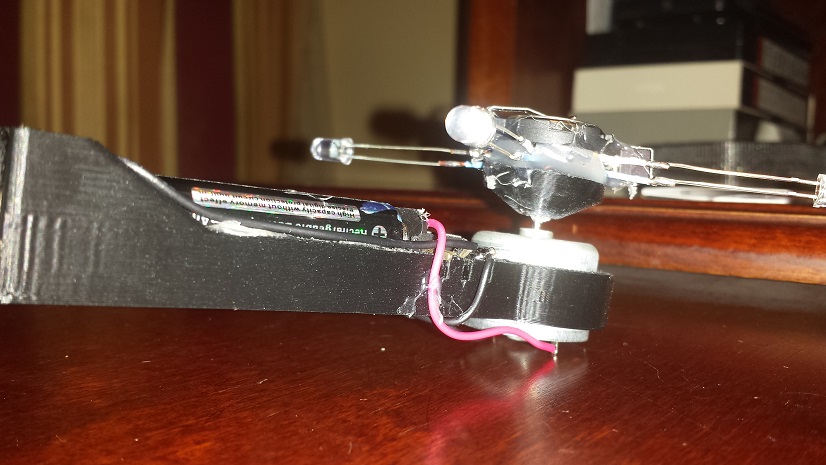 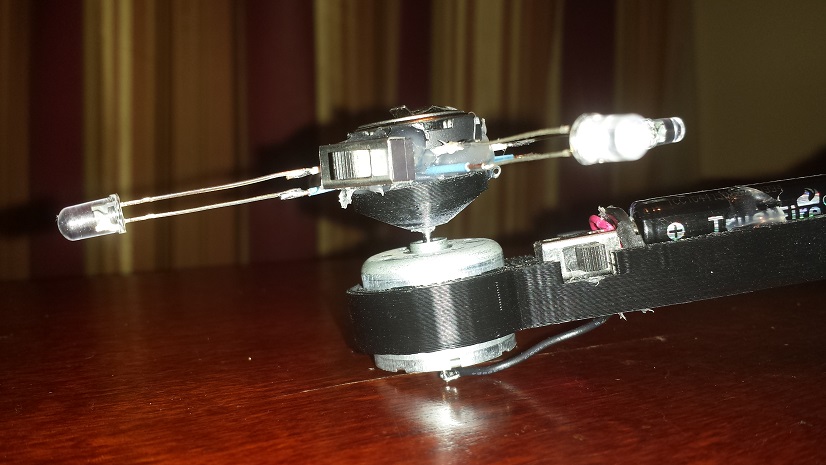 
With the LED's wired to be turned on with a switch, It was time to work on the Small motor support. The Small motor spins the LEDs so that it looks like a circle: 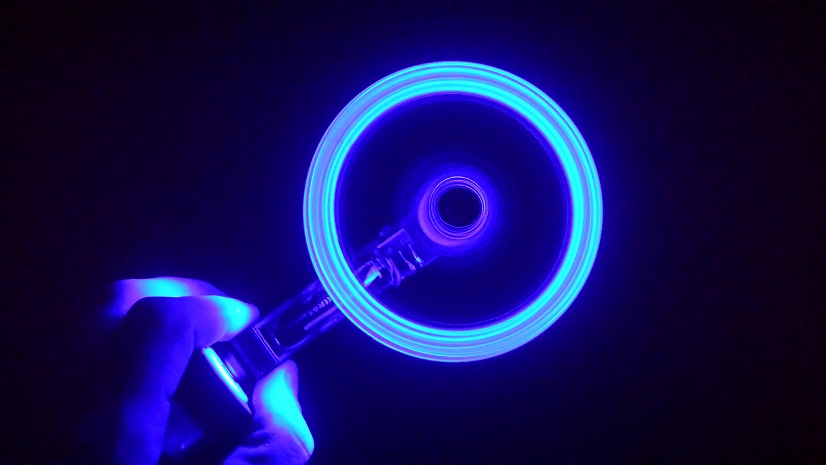 Back to 3D designing, Print it out and start wiring. 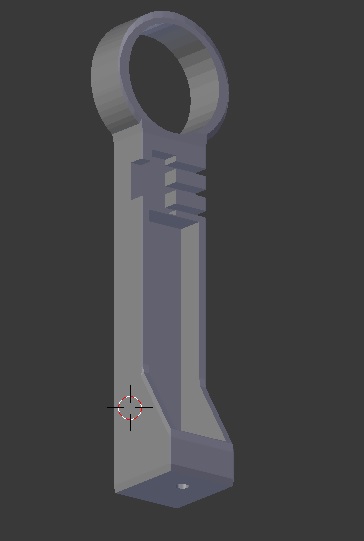 Top circle gets the motor, Middle E looking compartment gets the switch, and the bottom cavity gets a AAA battery holder. 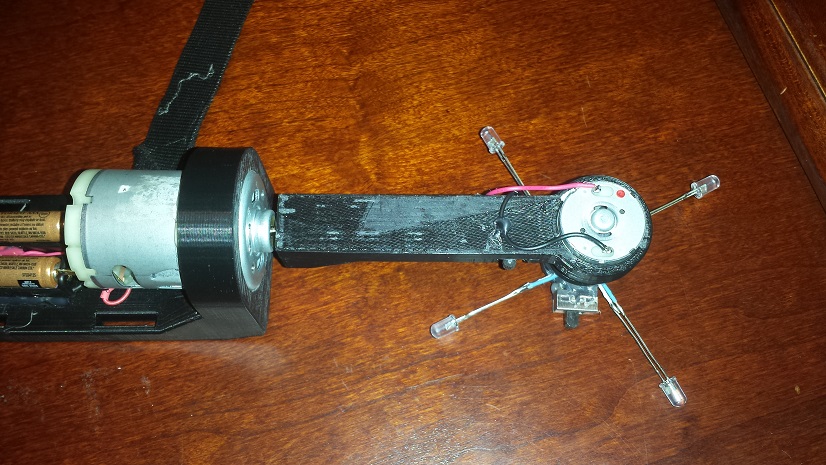 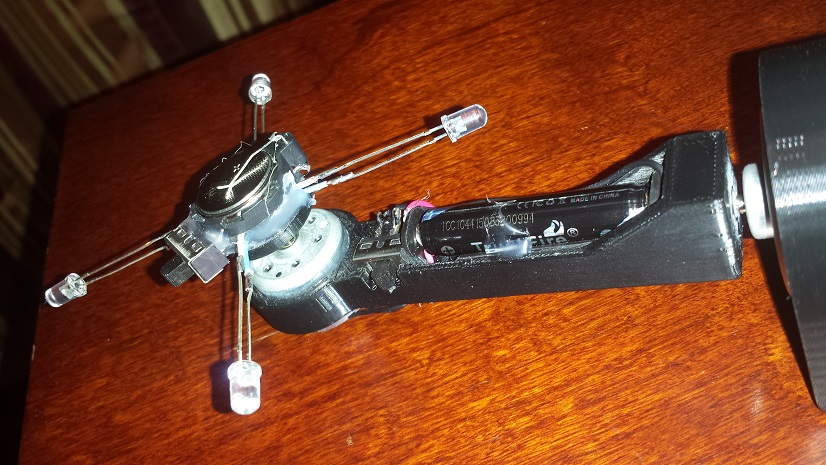 After determining that 1.6 volts was not enough to power the motor effectively during the 2nd axis spin, I modified the aaa battery holder to accommodate a trustfire 3.7 volt motor. Seems to handle nicely.


3D Design again. Print out. Start wiring. In the end, I wired the large motor to 2 AAA batteries wired in Parallel to let the motor run longer. It was already powerful enough to spin the small motor housing at 1.6 volts. 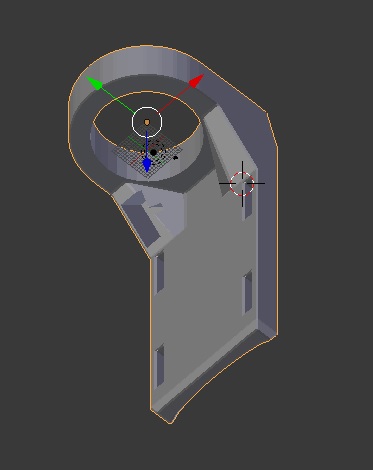 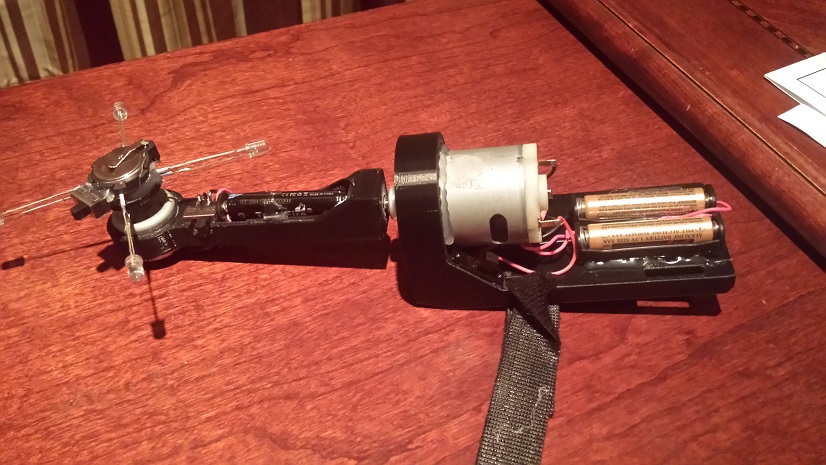 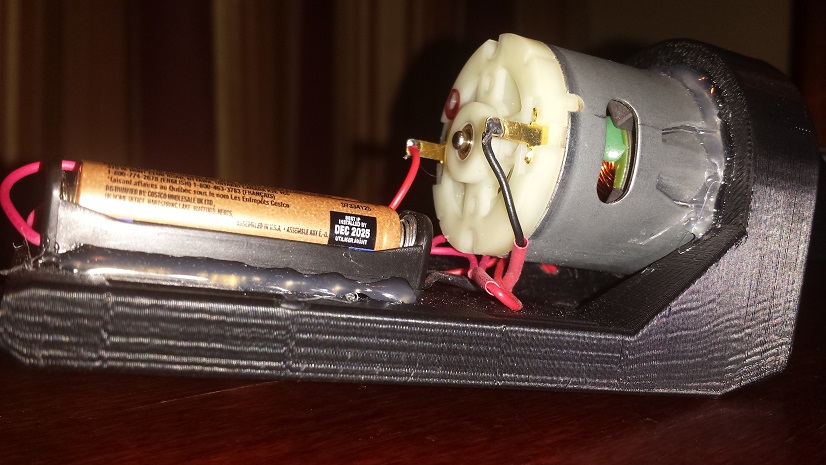 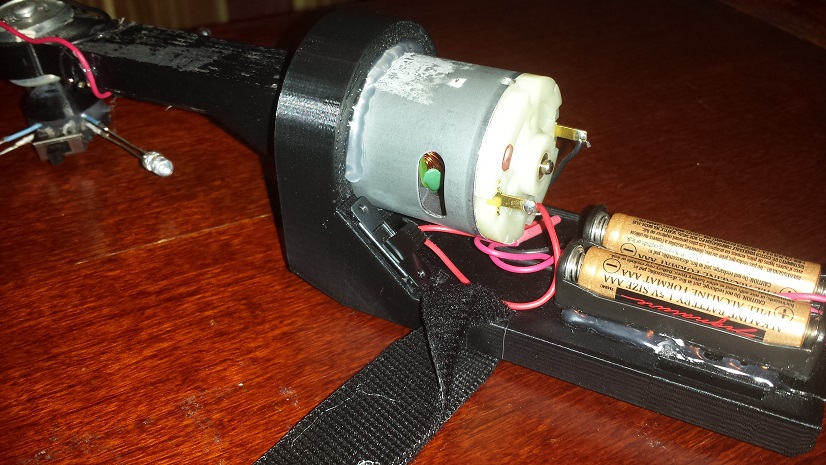 The straps are just made from velcro wraps and works great for the application. Hope you enjoyed this as much as I did. It took about 3 hours to put together from scratch. The below results are pretty cool and the kids get a kick out of it. Enjoy! 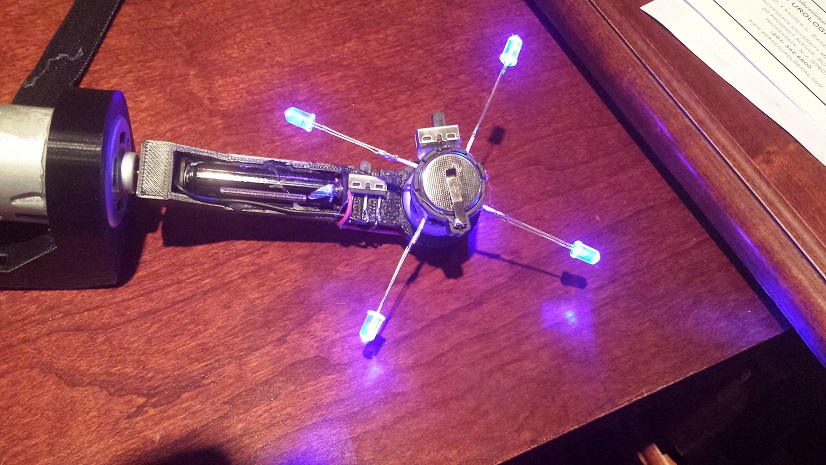 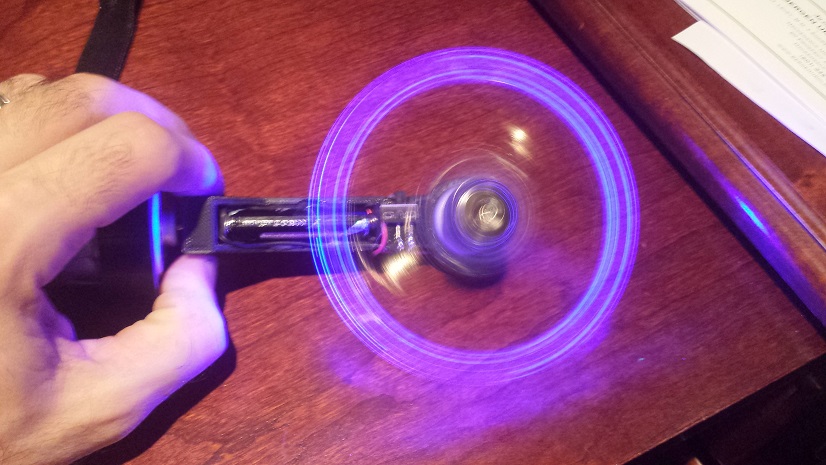 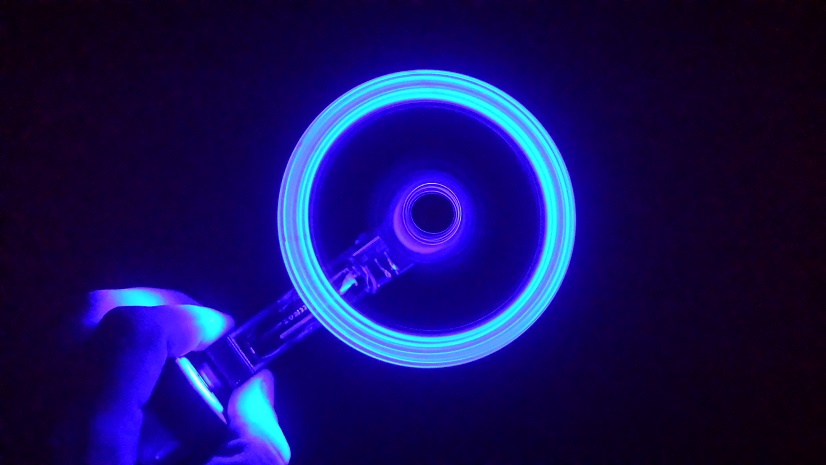 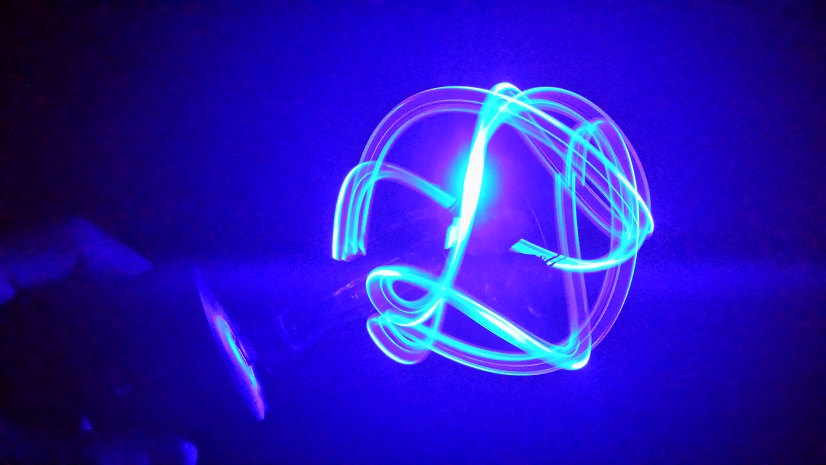 And the video of it in action.

First ever Pepakura creation, I'm tempted to give up. What do you think? EDIT 2: I need help.