ODST WIP - Been Years in the Making

Pacific Regiment
Alrighty mates, got some work done, been doing the backpack all day long and I'm currently taking a break before I get to the last few pieces and strapping will be the very end when the shoulder pads are done on the ODST. So really, we're kind of at the last half mile you know?

The backpack I wanna say is easy to assemble...but I'm sorta just looking at Sean's thread on it and still scratching my head cause he doesn't go into a picture detail so I think I might of dinked up somewhere down the line. 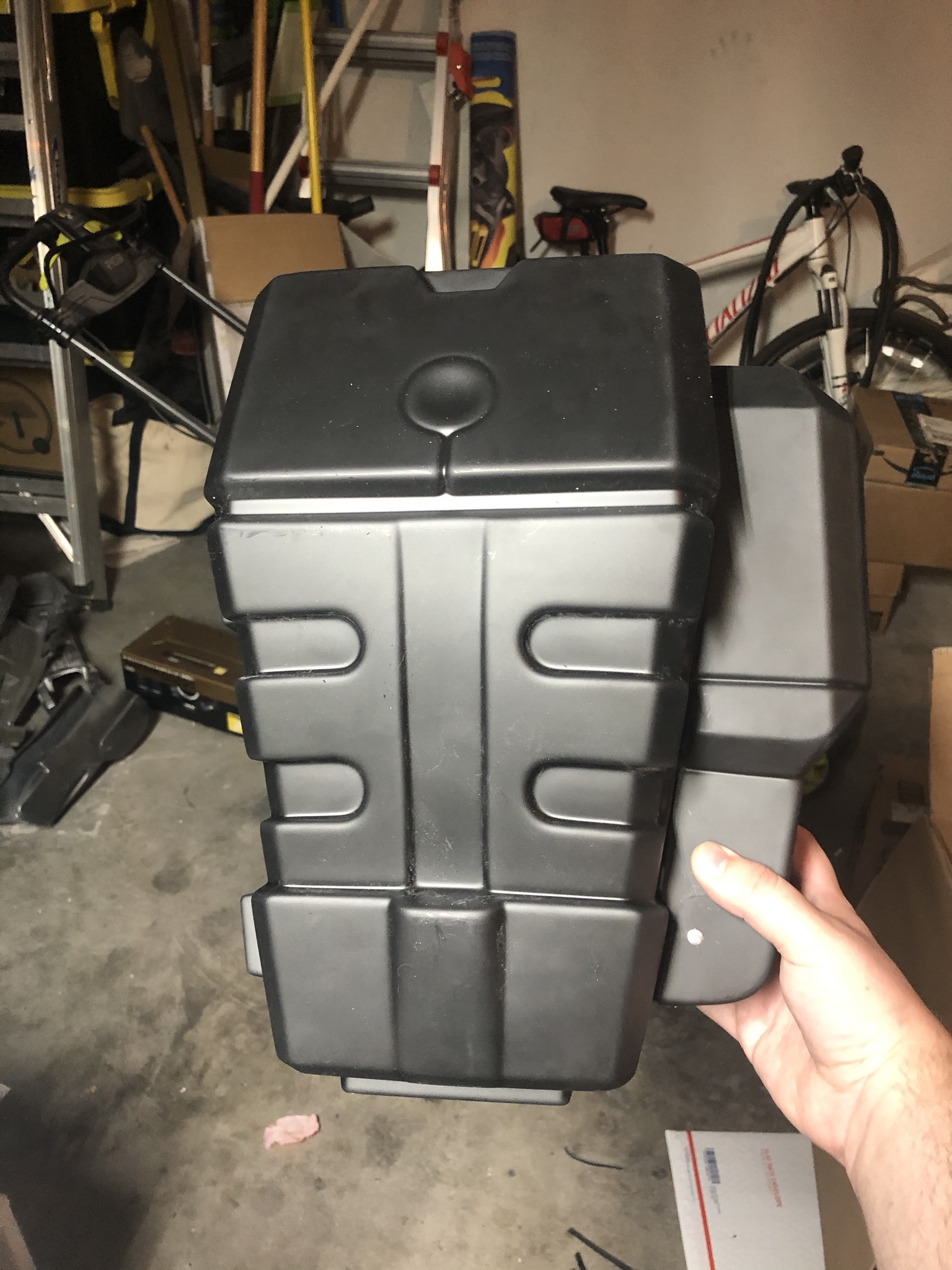 Getting the two halves together was rather easy, but it seems to be a tad short depth wise and didn't want to link up as nicely as I would like. All I would be able to do would be to sand the edges down more but if I did that, the other parts wouldn't be able to link up accurately so I'm kind of at a loss on that and just made do.
I followed as well as I could to how Sean assembled the two halves together by using shims along the length of pack and then riveting them in place. That worked out rather well.
I didn't have clear direction on getting the side pieces to connect but I did manage to find some of the impressions on there and used my dremmel tool to get my 1/8 holes in place which matched up pretty decently to the raised square portions that seem to hold it all in place then just started snapping rivets. This time though I decided to skip using washers on the other end, this will hold up pretty well without them, and I'm gonna need the remaining washers for the chest plate and back when I do the shoulder pads. 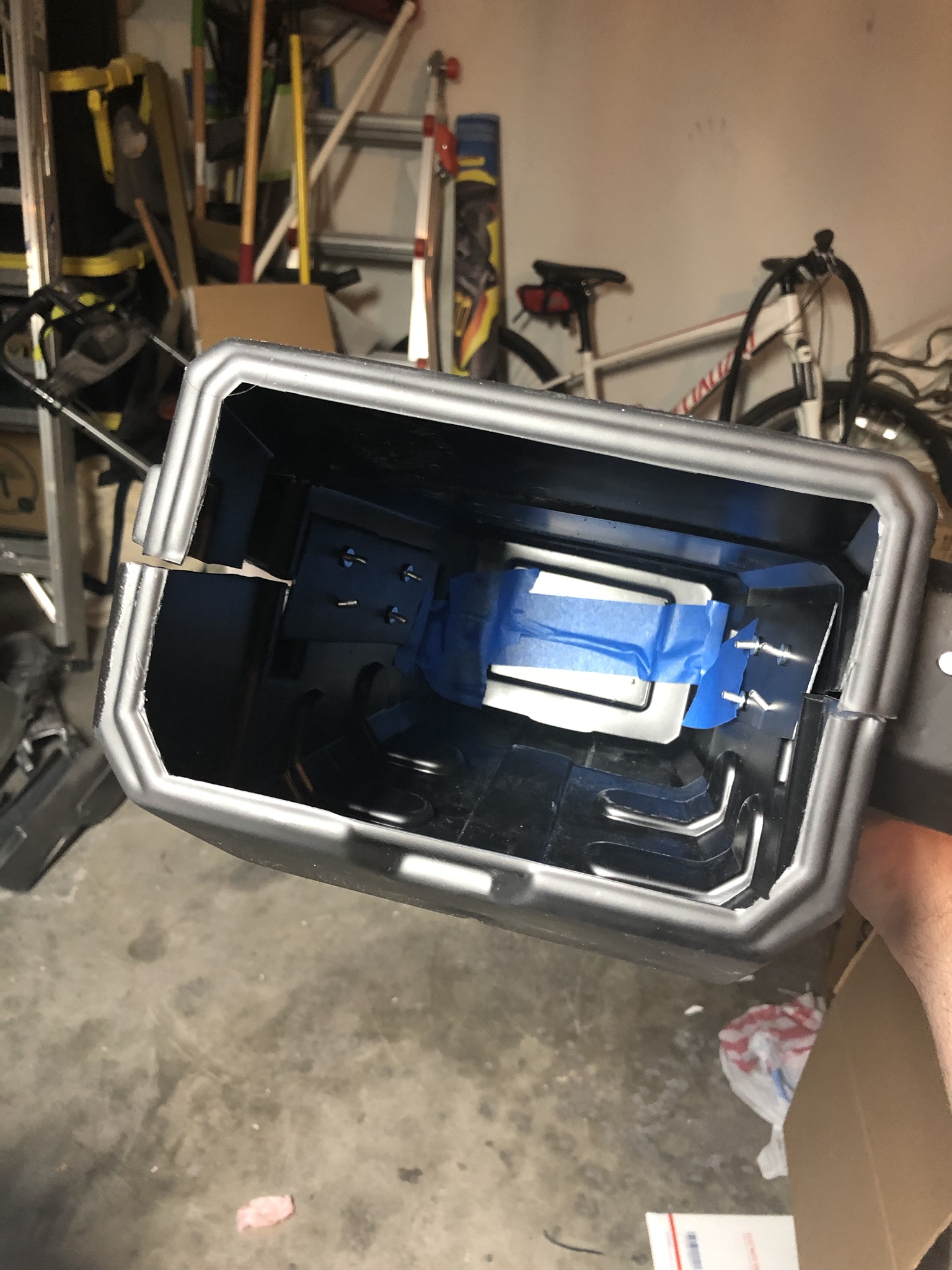 There was some major gaping along the bottom and lower corners so I grabbed some painters tape to fill the gaps then I used a little putty to fill the seams in just a bit on what was left exposed after I got the bottom plate riveted inside, that sort of actually helped close the gap.
I did though trim the sides for the handles but they don't fit very well and I"m worried they'll snap off with a little pressure. I'm not sure how I'll correct this but I'll make due with what I can.
I also do not have the top side pieces that blend the 1 inch webbing in place for the pack straps if that makes sense. I'm not entirely sure how I"m going to do that....I guess I'll trim just a little bit on the top sides and glue the webbing in place or perhaps rivet them! The trim pieces will cover that up nicely now that I think about it....And then the packs padding will go on and I'll leave a lot of slack so I can trim what I don't need when I try to attach it to the back....hah! 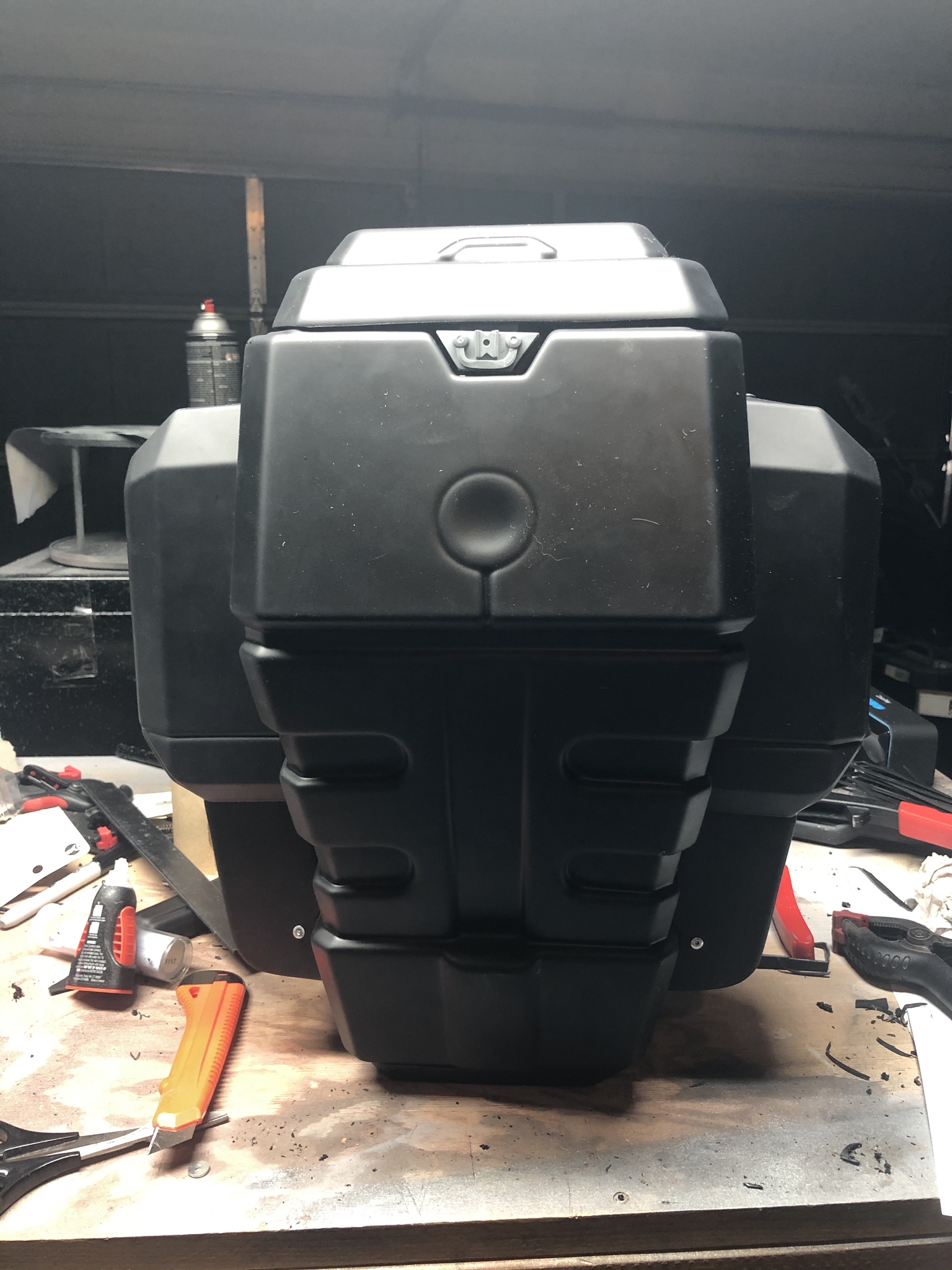 I trimmed the overall height of the top hatch for the pack, and I currently have a piece of shim velcroed inside and the pack buckle glued onto the shim. I'm deciding if I wanna go Sean's route in gluing some elastic to act as hinges and velcro the buckle to the pack so it can be opened to store my con goods. OR if I wanna find some relatively cheap and small door hinges and screw those in. Either or would be appropriate to me. But seeing how I should have straps somewhere and not hinges and I'm low on money, I might just go that route. 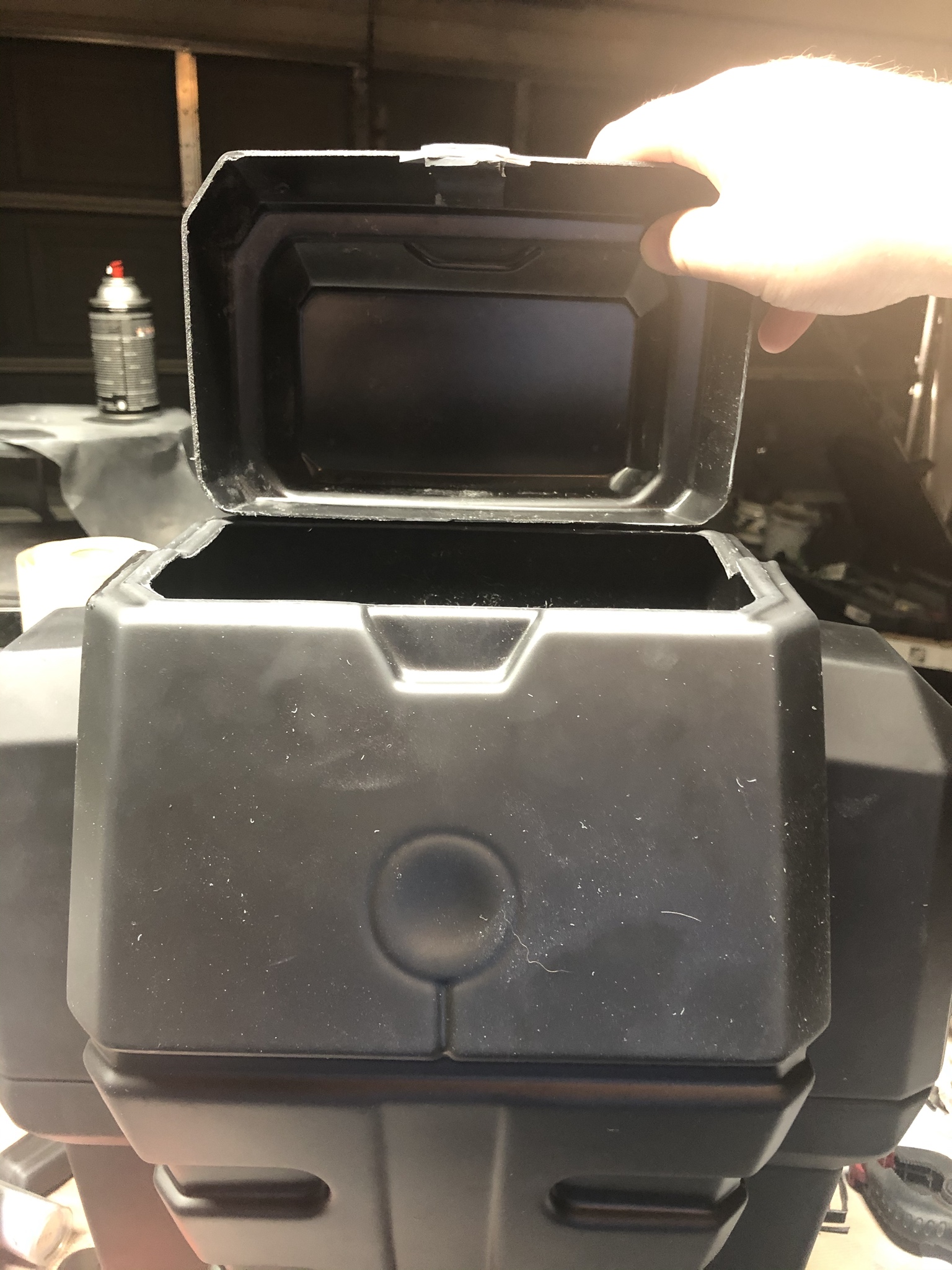 Overall, the pack is coming out well and can't believe how fast I got this thing assembled.

Pacific Regiment
I've been busy with interviews this week and dealing with some cruddy weather and selling decals from my etsy shop so I haven't been able to do anything really.
But while I was busy working in my garage reorganizing some more stuff I actually came across some old motorcycle helmet liner and gutted it from something I wasn't using at all and got some of my ODST helmet quickly lined up top, just gotta add a bit on the back. So while I was looking at it I felt like it could use some sort of markings. Was wondering, has there ever been any official markings around the helmet or is it generally kept pretty bare bones? I know I talked about adding a lion graphic somewhere on the helmet which I sorta got that figured out. But anything like UNSC logos or ANYTHING else? I know I downloaded a blood type medic graphic to go onto the shoulder and gonna get that worked on at some point when I'm ready.

Pacific Regiment
So after a very busy seasonal job that lead to being unemployed again and going stark raving mad with nothing else to do......I've gotten back into my project!
I picked up some supplies but I got a few more things left to do to where now this is becoming a slightly budget style meaning I"m cutting some corners lol.

I've got EVA foam I need to cut my shoulder harness from front to back and lots of fabric to wrap around it. However I'm not gonna go blow money on 20 dollar tool belts and gut them just to resew them for this. So I'm on the look out for some thin craft foam and decent black fabric....still gonna sew but I'll be able to spend a lot less in doing it that way if any of that makes sense. I got plenty of nylon 1 and 2 inch and buckles galore as of late.
I also was able to get 1 and 2 inch black heavy knit elastic. I can use that to do my shoulder armor strapping and my thighs.

Tomorrow I'll be dedicating time to finishing the legs getting them strapped and finish strapping my thighs to my belt. I then need to dig around and find my other damn boot that's gone totally missing, get it cleaned up and get the boot covers strapped. If I can finish all of this over the weekend (realistically I think I can do it all on friday) then the lower half of my kit is finished. Just gotta stay on target and not get depressed or anything since I haven't found steady work.

Think I'll have some good pictures from this weekend to show things off.

Pacific Regiment
No real progress, no photos today either, I ran into a small issue called kitchen repaint. Had to assist with that today so things were cluttered in my work area but it's okay, kitchen's done, things are put away. Tomorrow I'm breaking out my sewing machine to take a look, in the mean time I got some straps for the legs sized, tested and ready to have velcro stitched on. Buckles were also painted that wrap around the legs.

I thought about another corner cut. Some years back I bought thigh padding for my old H3 Marine. Since it has straps to loop around the 2 inch webbing belt I've recycled into the ODST suit, I might be able to unstitch the loops and repurposed them into the thigh armor parts.
Can't find my other boot though that's been tricking me up...might have to buy new boots eventually hmmmm.
You must log in or register to reply here.
Share:
Facebook Twitter Reddit Pinterest Tumblr WhatsApp Email Link

How do cons work? I've never been to one in costume.
2

Making my first set of Armour! Probably Should have been posting this long before....
2