Soft Parts Underarmor? I think so!

Sewing through hot glue is indeed possible, but, to be on the safe side (for anyone wanting to do the hot glue method), melting trough it hot needles can prevent it from like, ripping from the needle holes. (happend to me once, but in a different project)
S

Ive been planning to try a similar thing using latex, should be more flexible than the glue method and it should also have a bit of stretch to it. Latex is prety cheap to buy (mind you its not as cheap over here in rip-off england!) so it wouldnt be a great monetary loss if it all went a bit pete tong.
L

if you want a cheap base, search ebay for a spandex suit, theyre like 5 bucks from china. and sypher im sure you could do the same and just cut it into the peices you need. on another note, rose i also dream about making my armor, if im lucky enough for those thoughts to allow me to get to sleep in the first place id say its probably a common problem amongst our community

hognoshal said:
if you want a cheap base, search ebay for a spandex suit, theyre like 5 bucks from china. and sypher im sure you could do the same and just cut it into the peices you need. on another note, rose i also dream about making my armor, if im lucky enough for those thoughts to allow me to get to sleep in the first place id say its probably a common problem amongst our community
Click to expand...

Spandex is bad for heat.. (that's why ballarina's(sp?) have such large open sections on their leotards). We're fully enclosed in our armor and can't cool down. Heat stroke is possible, though it's a much larger risk if you use diving gear. Take your helmet off often.

I really think that Motorcycle Coolmax suit is the best option I've seen so far. It doesn't look real elastic though.. dunno' how good it'll be..

Florida folks.. don't use hot glue on this, or ya' gonna' be sorry.
Click to expand...

and theres ANOTHER reason why im probably not gonna use hot glue lol. Im trying to think of a flexable plastic that isnt too heavy and I can make (again, ive never worked with any of this stuff before i.e. resin, fiberglass, dremels, etc) fairly easily.

For an undersuit I would recommend not using Spandex for the reasons mentioned above. Instead try a fabric manufactured by Polartec. Yep, that's the company that makes the best fleece in the world. The fabric is called Power Dry. It is a lightweight breathable base layer designed to wick moisture away from your skin. Keeping you cooler and more comfortable. As a bonus, the fabric is also available with Odor Resistant Technology, so your undersuit won't smell like something (or someone) just died in it. On the issue of padding, I think mesh pockets that individual pads can be inserted in is the best way to go. Removable padding means you can wash the undersuit (back to the smell bit). A combination of open and closed cell foam pads should work well. Just remember to break the padding into segments, as closed cell foam doesn't really do compound curves in the most comfortable manner. Good Luck.

The source for Polartec fabrics for the home sewer is Malden Mills Direct Textiles . Beware of imitators.
L

I'm curious about all the velcro hating going on! I used industrial strength velcro and have zero issues with it so far.
B

Southern Regiment
lol, I was young, the Velcro overpowered me. I feel violated.
U

BlacRoseImmortal said:
lol, I was young, the Velcro overpowered me. I feel violated.
Click to expand...

That sounds like a heckuva story there.
Last edited by a moderator: Feb 25, 2017

Canadian Regiment
hey kelly, i know im going against my oath not to help people with their under armor and sugesting things myself and binary are working on but why not have on your undersuit some sort of button clips that can be reatached to spicfic peices of armor. or some sort of thing you can snap another peice onto! im on xbl this weekend we will talk about this if you want... binary will be working so no sexy voice.
B

Southern Regiment
DAMN! he told me hed be on tonight!!! I NEED TO HEAR HIS GODLY VOICE!!! now im sad.

And i thought about the snap on pieces and i was thinking of doing that with the torso piece, I also though about having to wear this full body undersuit and having to go to the bathroom so i want to make pieces that come off easily and quickly lol.

Canadian Regiment
well the bathroom part is easy go into halo 2 ok.. kill your guy and see if he or she dies laying down with his legs apart and knees pointing upward... now go and get a sniper find your guy zoom in 10X at his crotch you will find a material rather than the actuall armor.. same thing in all aromor suits yet no one has noticed it before. between his legs is a zipper! so female acess to washrooms... male acess the front caseing sorrounding the crocth open up and there you go...

Holy Cow, I have alllllooooooooootttt of Halo dates this weekend lol. Gotta make time for all of them plus building my mannequin/Sniper Rifle/Chest plate/Drinking..... where am I gonna get all this time!??!?

Canadian Regiment
Drinking, your not allowed to drink, you too young....-.-* Unless it is coke or pepsi of course. Send me one aswell xD
B

Southern Regiment
Hey, age aint nothing but a number lol. If it wernt for me my favorite bar would have gone out of business awhile ago, i practically pay their rent lol.
N

Ok, here's my thoughts. JoeyCoz, with his hot glue method, also briefly mentioned wanting to coat the under armor pieces in Plasti-Dip. According to the Plasti-Dip site, it's a "Stretchy rubber coating remains flexible when applied to ... anything that paint is applied to."

I'm thinking I definitely want to try some kind of rubber as the casting medium (polyurethane rubber, probably) and coat it in this stuff for strength and color, but to help it retain it's flexibility.
B

Southern Regiment
I totally missed that part, that sounds like a grand idea.
N

ALSO, I just found out soon after posting that, that Thorssoli used some Plasti-Dip on his girlfriend's helmet, (in the same way I had planned on doing. Thanks for being a guinea pig Thor!) and it looks amazing...


thorssoli said:
The next step was to mask off all of the areas that needed to be black. I did the black details in Plasti-Dip rubber paint (the spray version of the rubber stuff you use on the handles of pliers and such) because I wanted it to have a different texture when you touched it. So the neck details, the cheek inserts, the temple areas, and the recess under the brim are all essentially painted with a thin layer of black rubber. 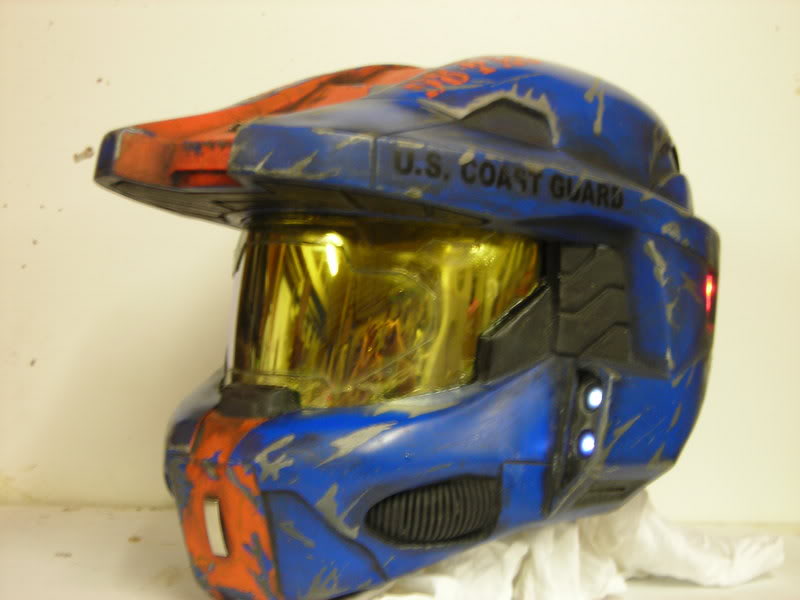 I think using Plasti-Dip throughout the 'soft' pieces of the armor would really tie it all together, pushing the feeling that the suit is one piece as a whole, and not one suit worn under another.
Last edited by a moderator: Feb 25, 2017

BlacRoseImmortal said:
What i was thinking with the misection piece would be have it split along the zipper line on the undersuit and use ....uh....snappy-things
Click to expand...

Ahh, yes. Snappy things. Not to be a butt, but one of the office ladies uses terms like this. If she needs pliers, she asks for pinchy things, and screwdrivers are stabby-slash-turny things.
Personally, I think it's awesome. more things need to be described like this. When I was a kid, I called brussels sprouts 'salad balls', and butter was 'the yellow container with a white lid, with the white letters that say 'butter' on them' so don't think you're alone.

Side note: has anyone tried doing the hot glue method, but laying some black cloth into the mold before using the hot glue? I'm not a hot glue user, as i grabbed one by the nozzle when I was like 10, and I'm still scared of the damned things. I was just curious if the fabric would prevent having to paint it, or at least cut down on the amount of spraying required.
Last edited by a moderator: Feb 25, 2017
B

Southern Regiment
lol, nice i like to name objects and end them with "thingy" lol. Im not a hot glue user either, When i was in elementary school i got an entire melted stick drawn across one of my arms..... someone tried to write their name on me. It sucked mostly because I couldnt shake it off and I had to endure the pain till it cooled..... good times