Yep. This time I just got back from the world premiere of Pirates of the Caribbean 3: At World's End.

Guess where it was 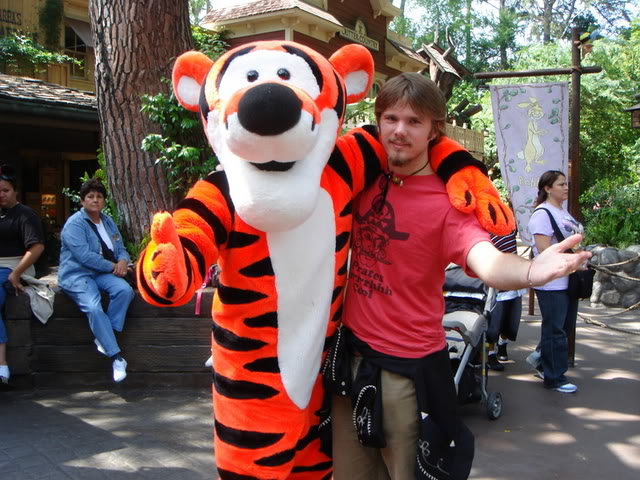 It was amazing. I flew out to Cali early on friday and spent the whole day at the park. At around midnight I left the park and passed about 10 people in sleeping bags right outside the main gate. The next they they would get up at 5am, wait at the main gate until 6.30am, buy a $63 ticket to get into Disneyland, and then sit at a fence all day until around 7pm just to get a glimpse of Johnny Depp or Orlando Bloom. Wow. Anyway... 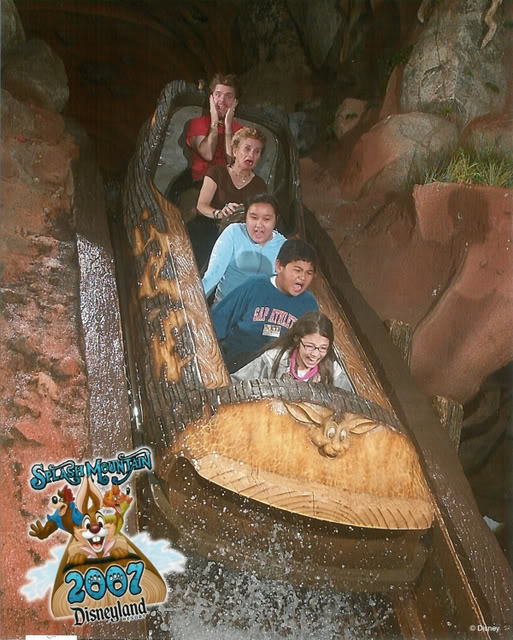 Thats Mom infront of me. heehee

After getting out of Splash Mountain I passed Geoffrey Rush (Barbossa) making his way out of the Pieces of Eight gift shop. I got to talk to him and he even posed for a pic but mother was having technical difficulties with the camera and he has to leave before said difficulties were rectified. 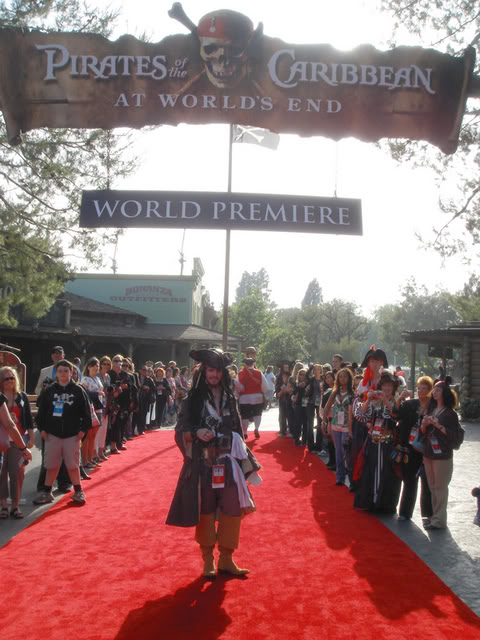 I then proceeded to walk down the red carpet next to Teri Hatcher. Sadly, no pics of that.

Walking down the red carpet was amazing. I was being asked for pics and autographs, everyone was complimenting the costume, and I got to meet many celebs. Here are a few: 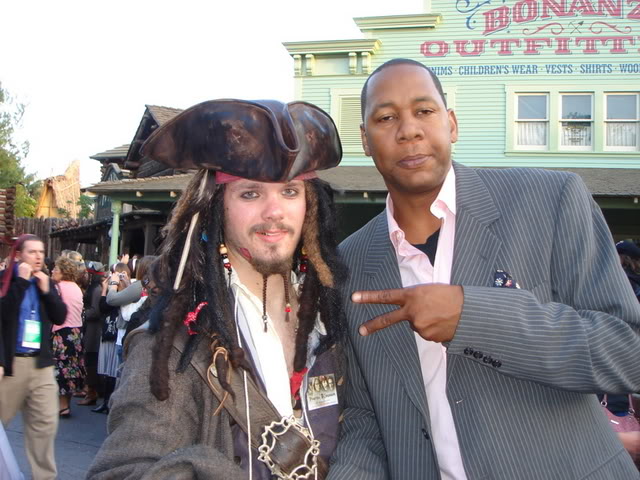 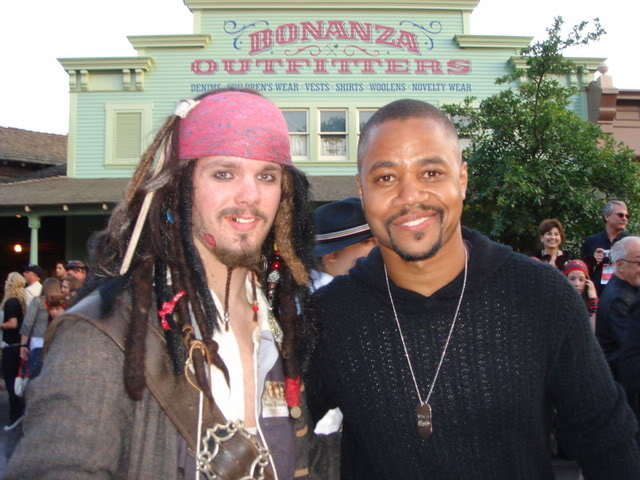 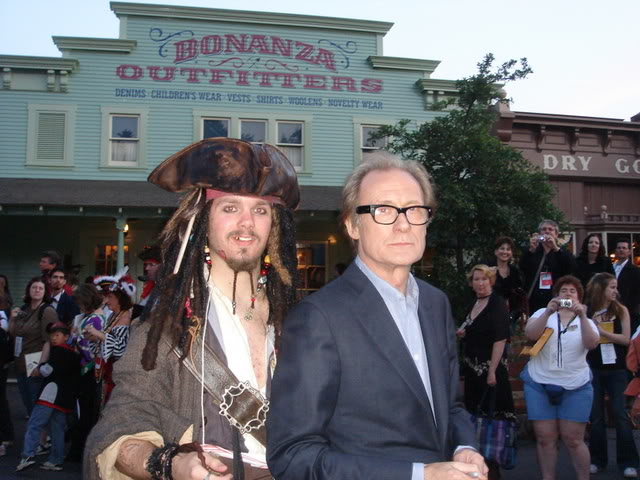 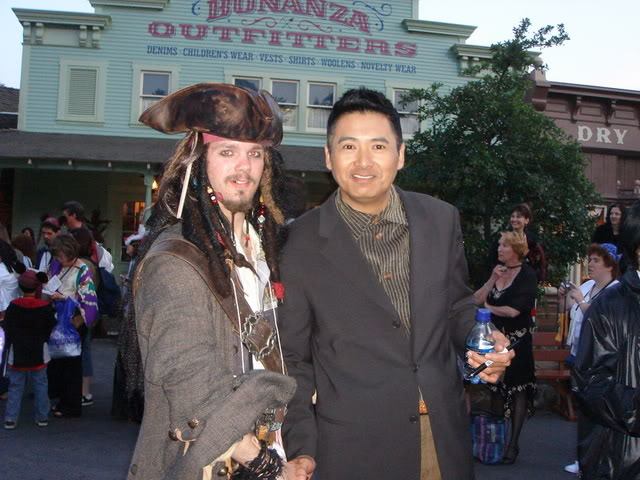 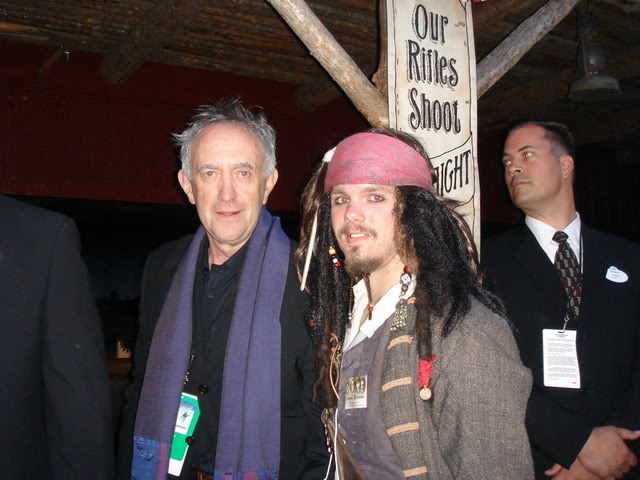 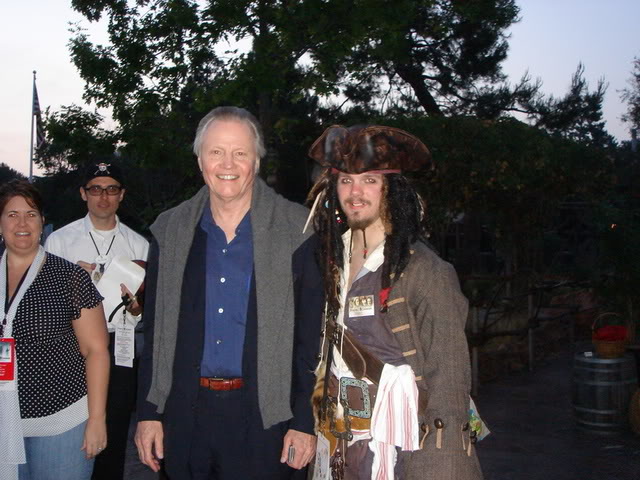 When it started to get dark, we took our seats in a huge outdoor stadium set up facing a projector screen on Tom Sawyer island 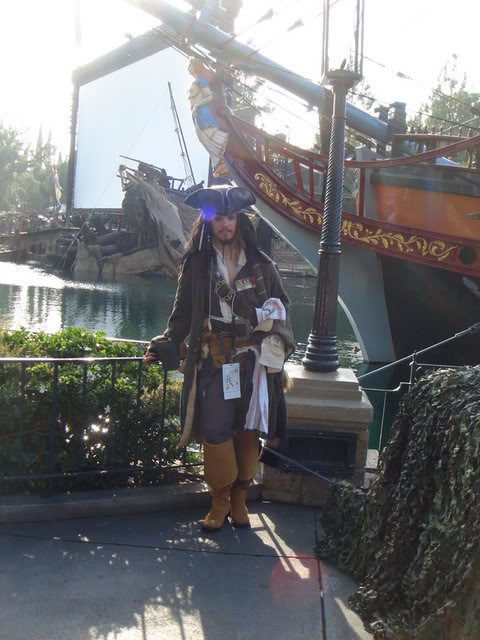 This is when they security checked our cameras. Finally the show began with Hans Zimmer(composer) rocking out on a bass guitar and conducting an prchestra to play a song from the new movie. Definitely a highlight.

Next, one by one the talent came to the stage and bowed. All of the main actors and actresses were there except for Keira.

Then the movie played and everyone cheered. I'm not going to spoil anything, but it was very good.

After the movie, we all had exclusive access to a few of the rides until 1am. I walked out of the park next to Martin Klebba, the dwarf from Pirates. He was very nice and complimented me on my costume.

On the way out, I grabbed my camera and was given a pretty kick-arse goodie bag. 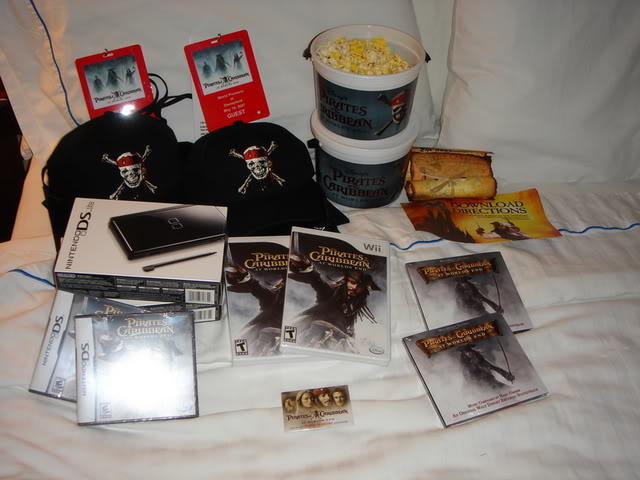 The DS even had a custom sticker for the event 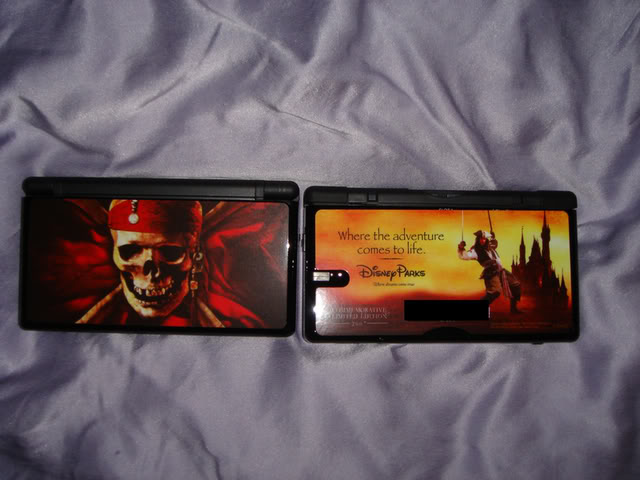 Of course those are all over ebay now. Anyway, I was very tired when I got back to the room so this is actually how I almost fell asleep 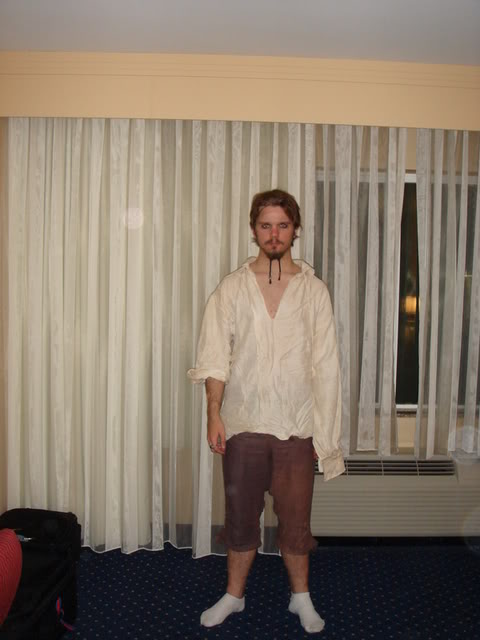 I had so much fun on this trip and just thought i'd share some of the highlights with you guys. Hope you enjoyed them and don't forget to go see Pirates at 8pm this Thursday at your local cinema. 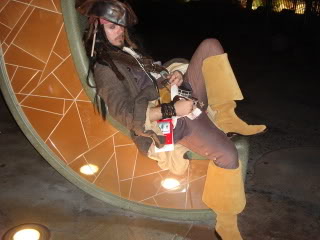 same here plus i want to kill u

Damn Red, what you show'd me on AOL was the tip of the iceburg man. Looks like you had a epic time and i bet being loved in the sparrow costume was your fav part.

Southern Regiment
kool glad that you had fun out there...one of my good friends was an extra in both movies (2 and 3) he seen it a few days ago and he said that you could see him in there

heres a one sec frame of him

him as a extra pirate

and him as a East India Trading Company

Colonial Regiment
Sadly I have no pictures of my friends starring in movies or pictures of me with Cuba Gooding Jr. or Chow Yun Fat to share. :$ops:

Congrats Charlie!, this must be the start of an amazing summer for you.

The costume is phenomenal, and you deserve everything you got out of doing this! Keep up the good work brotha!

That's a damn good costume Red. I've only ever met WWE wrestlers in my life, pretty damn cool you got to meet all those actors.
B

At least Tiger didnt beat the day lights out of Red
(ha ha, we all know that incident right?)
A

Colonial Regiment
I've been thinking about this over the past day or so.... admittedly after showing your write up to a few friends and such for that "Wow, cool!" reaction that everybody has. Anyway Red, I wanted to ask a few of their most frequent questions.

Was that costume unfomfortably hot to wear in the California sun?

How did you get hooked up with this gig? Inquiring minds want to know!

Did you attempt to act the part at all? Did you do your best Capt. Jack impersonation for everyone on the red carpet? (heheh.... 'Red' carpet.... funny :mrgreen: )

Im also interested at howyou got this gig?
M

cool, what are you gonna do with all that crap they gave you xD , anyway i cant wait to go see it, since im going on a trip to go see my cousins and stuff friday, we were gonna go see it when it came out but now we all made sacrifices and have to wait till we get together and we are all gonna go see it . Nice costume now shows us spiderman and master chief.
A

Also, How often were you mistaken for Johnny Depp?
R

Sean Bradley said:
Was that costume unfomfortably hot to wear in the California sun?

How did you get hooked up with this gig? Inquiring minds want to know!

Did you attempt to act the part at all? Did you do your best Capt. Jack impersonation for everyone on the red carpet? (heheh.... 'Red' carpet.... funny :mrgreen: )

Well, surprisingly and fortunately it was not hot at all. By the time the movie started I was actually very glad I had my heavy jacket. Since the theater was outdoors on the water, there was even a blanket under each chair which most people ended up using.

Make-a-wish had a charity event where they were selling tickets. This was my 19th birthday/graduation present.

Oh course! I had the walk and look down. :dee:


Mancubus said:
cool, what are you gonna do with all that crap they gave you xD
Click to expand...


Ares said:
Also, How often were you mistaken for Johnny Depp?
Click to expand...

A lot actually. Japanese tourists mostly.
Last edited by a moderator: Feb 25, 2017
A

Japanese tourists are easily mistake us in Costumes for the real dudes.

Ares said:
Also, How often were you mistaken for Johnny Depp?
Click to expand...

Why yes i did. My favorite thing to do was give the other person my hat to wear, and then we would both make the peace sign.

sidenote: i'm not trying to be racist towards japs or anything, this is just what happened.

Oh, and for those of you who have seen the movie will enjoy my last minute costume addition 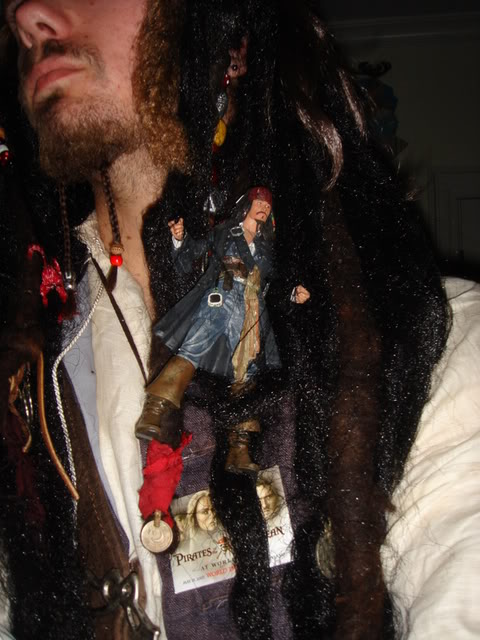