Division Staff
Canadian Regiment
405th Regiment Officer
Delta
Community Staff
There's a zombie walk coming up this weekend. I could be a dweeb and come in guns blazing like this.

Or I could do the thing and be a madman with five days to build some gruesome Flood add-ons to the armour! The liquor fueled plan (happy Canadian Thanksgiving everyone, go Jays go!) entailed building a cowl and sleeve that could be interchanged with the normal ODST helmet, shoulder and gauntlet to give a much more grisly and event appropriate outfit.

Having this Monday off I got to work by running to the hardware store and pop-up halloween shop to find expanding foam and a spare head to add onto the cowl at a jaunty angle. For reference I have used the Halo 3 Flood Human Combat Form which is convenient because I have a completed suit, battle rifle and I am human.

For the cowl I built up a supporting structure that will be locked into place on my chest rig by current fittings. All of this was built using scrap EVA from previous builds so that helped keep costs down and saved a trip to Canadian Tire. From there I covered the skeleton with 2mm craft foam after a test that the expanding foam adhered to it. For the record, Great Stuff Big Gap Insulating foam does adhere to EVA and craft foam so fill your boots, I don't really see it being a mainstay in the 405th toolbox but it's definitely a bit of knowledge that could come up at some point.

The Technicolour Court Jester Cowl was then coated and is currently curing for the suggested 18 hours.

Tomorrow the plan of action for the cowl is to trim excess foam and then shape with papier mache to build out the bulge where my view window will be, also hidden behind carrier tentacles. The foam head will be detailed into a less neutral expression and the body will be prepped for a latex coating.

As well as the cowl's main structure I completed the core parts of the arm growths using a 4" ABS coupler, 1/2" PVC pipe that was leftover from previous projects and a bunch of EVA.

The plan currently is to have two sections the white bicep and black claw joined by cloth to allow a consistent colour texture along the arm while still being able to move and bend at the elbow. The upper bicep will be connected with a female buckle to the male side that is currently attached to the shoulder strapping on the torso armour. The 1/2" pipe acts as a hand grip inside the gauntlet and there is a gap at the end beneath the claws which I can stick my fingers or hand through if I want to be accurate to the game model. One more smaller claw will be added and possibly some gross carrier style tentacles because why not.

Four days remain, two for structural work and one for paint. don't worry guys, I got this.

This looks like a really cool project, haven't seen a flood suit yet. Will be following this build. Do you have a thread on your original ODST armor?

Sent from my SM-G930T using Tapatalk

ewatt99 said:
This looks like a really cool project, haven't seen a flood suit yet. Will be following this build. Do you have a thread on your original ODST armor?
Click to expand...

Part of why I wanted to do it was that I couldn't pull up a single hit for a Flood suit on the 405th, so I might as well jump in feet first and see how it goes.

I didn't make a build thread for my armour because I was stupid and only took pictures during the majority of the build with Snapchat. Since then I started a Facebook page so that I could document my builds and not spam everyone with "I did the thing" so I've gotten better at taking pictures at stages throughout the process. The only other build thread I've done is for my sidearm of the M6C/SOCOM if you're interested in ODST goodies.

I did see that, but it's fine at least I can see a new project in the making. I also can experience an ODST build since I am making one. Good luck with the build!

Australian Regiment
Good luck on the build, it's starting to look good so far, but I've noticed from the pictures, that you have expanded foamed in the head, you missed an opportunity to attach the head in some way so it acts like it does in the game, flopping around like a ragdoll limb, but that's my 10 cents, can't wait to see the floody goodness that you have made!

European Regiment
This is gonna be good.
I've actually never seen one either, your ODST build was awesome, so I'm sure this'll be at least as good
Good luck!

Division Staff
Canadian Regiment
405th Regiment Officer
Delta
Community Staff
Mini update while I have some time between getting to a good stopping point and having to go pick up the girlfriend from work.

The claw gauntlet is done structurally and looks pretty gnarly. I took a measurement from tip of the extended claw in a vertical plane equivalent to the base of the gauntlet (floor) and it comes in at 32".

We were out of bananas so as the internet has taught me, half a loaf of banana bread for scale.

I went at it with my rotary tool to smooth out sections and minimize the amount of filler that I'm going to need to use as well as adding in some surface detail. I focused on adding stretch marks and tears into valleys between the claws, scratches and large indents that can be painted as sores on the main body of the fist and deep scratches and gouges into the claws themselves. I'm going to wait until after I've had something to eat to give myself time to think on "is it done yet" before going into KwikSeal mode in preparation for latex sealing tomorrow or Thursday.

European Regiment
Aw no!!
A while ago I was planning on a flood costume, started building a 'helmet' (I based mine on the Halo 4 Spartan Flood), and then stopped because I needed to get hold of Expanding Foam to carry on...
So now you have to finish this, cause my 'helmet' pathetically stares at me now 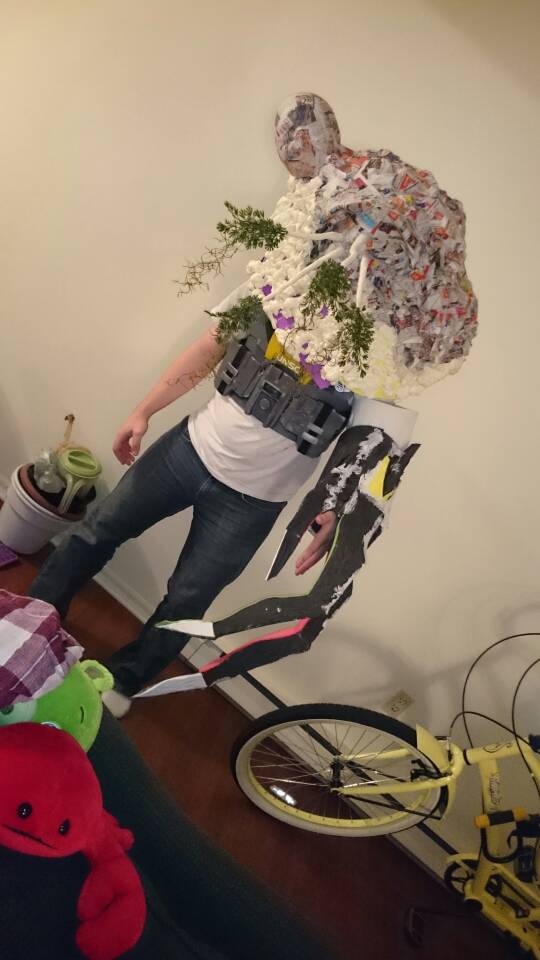 Face tentacles are made from a wire coat hanger coated in cling wrap and then bound in masking tape. The ends are sections of plastic plants found at Michael's. The fronds are "Boston Ferns" and the stringy bits are "Spanish Moss". 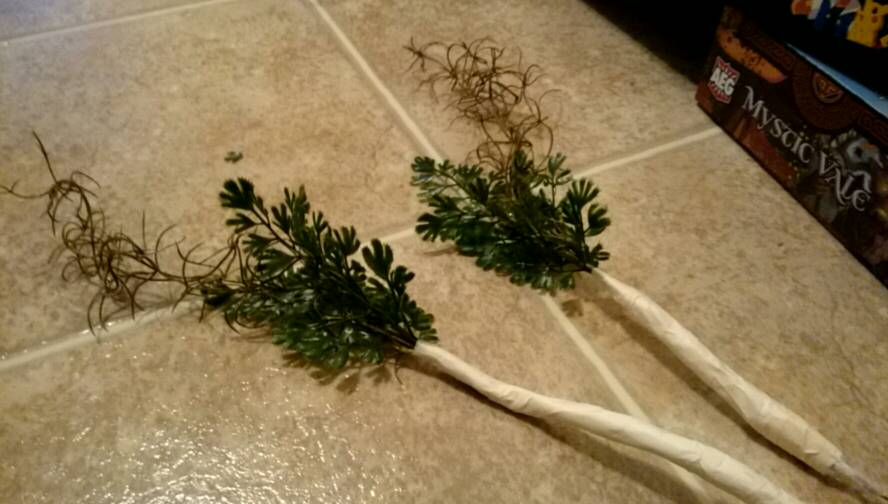 Everything is coated in liquid latex in preparation for painting and some smaller details such as the side face will be added with latex and paper towel as you would for prosthetic scars in makeup.

I'm really excited to paint this thing. It's been a lot of therapeutic building of literally just gluing random bits on all over the place and not at all following a pattern. Building with a final image but no plan is pretty rad.

Division Staff
Canadian Regiment
405th Regiment Officer
Delta
Community Staff
Update before the finishing touches and a clear coat to seal it all in the morning before the Zombie Walk tomorrow afternoon.

Everything was coated in liquid latex which smells terrible but after trying it out for this, I'm never buying PlastiDip again. It wasn't as easy to apply as a spray can but after two coats it was a fantastic base for paint and a solid seal to protect the inside bits from water. I might look into picking up an air brush and compressor some time soon because of this.

Paint was layered on in the standard manner of a primer coat, low-light colour, base colour and then drybrushed on highlights, accents and then a top layer to mute anything that was a bit too much.

For those familiar with the old Citadel paint colour scheme I went with approximates that were in big bottles at Michael's for $2.00 each and painted this big beast in a fashion similar to how I used to paint Kroot and undead type things.

The tentacle fronds were painted with an enamel crimson so that they'll have a glossy finish in comparison to the rest of the piece, I may mix up some of the crimson with liquid latex to add blood drips but hey, work in progress.

I'd say it's at the 95%+ stage right now. If you have any tips or tricks to make this thing look more gross, throw them my way!
C

This is equal parts disturbing and fascinating.

Canadian Regiment
That is absolutely mortifying, and I love it! Only tip I have for you is to master the flood walk! You may have to put your limbs in some odd positions but I'm sure you'll be fine.

Have a great time at Zombie Walk.


"I don't know what is weirder - that you're fighting a stuffed animal, or that you seem to be losing." - Suzie

Schankerz said:
That is absolutely mortifying, and I love it! Only tip I have for you is to master the flood walk! You may have to put your limbs in some odd positions but I'm sure you'll be fine.
Click to expand...

The arm has a section that clips onto my chest plate and then a fabric sleeve joining to the claw which males for a bumpy and broken looking arm with all the odd angles. I just need to get my legs to do the same now...

BRB. Off to play The Library for reference.
T

Canadian Regiment
I showed this to my friend and she squealed. She loved it, and I think it's an ambitious (and very rewarding) project

"Now the gate has been unlatched, headstones pushed aside; corpses shift and offer room, a fate you must abide!" 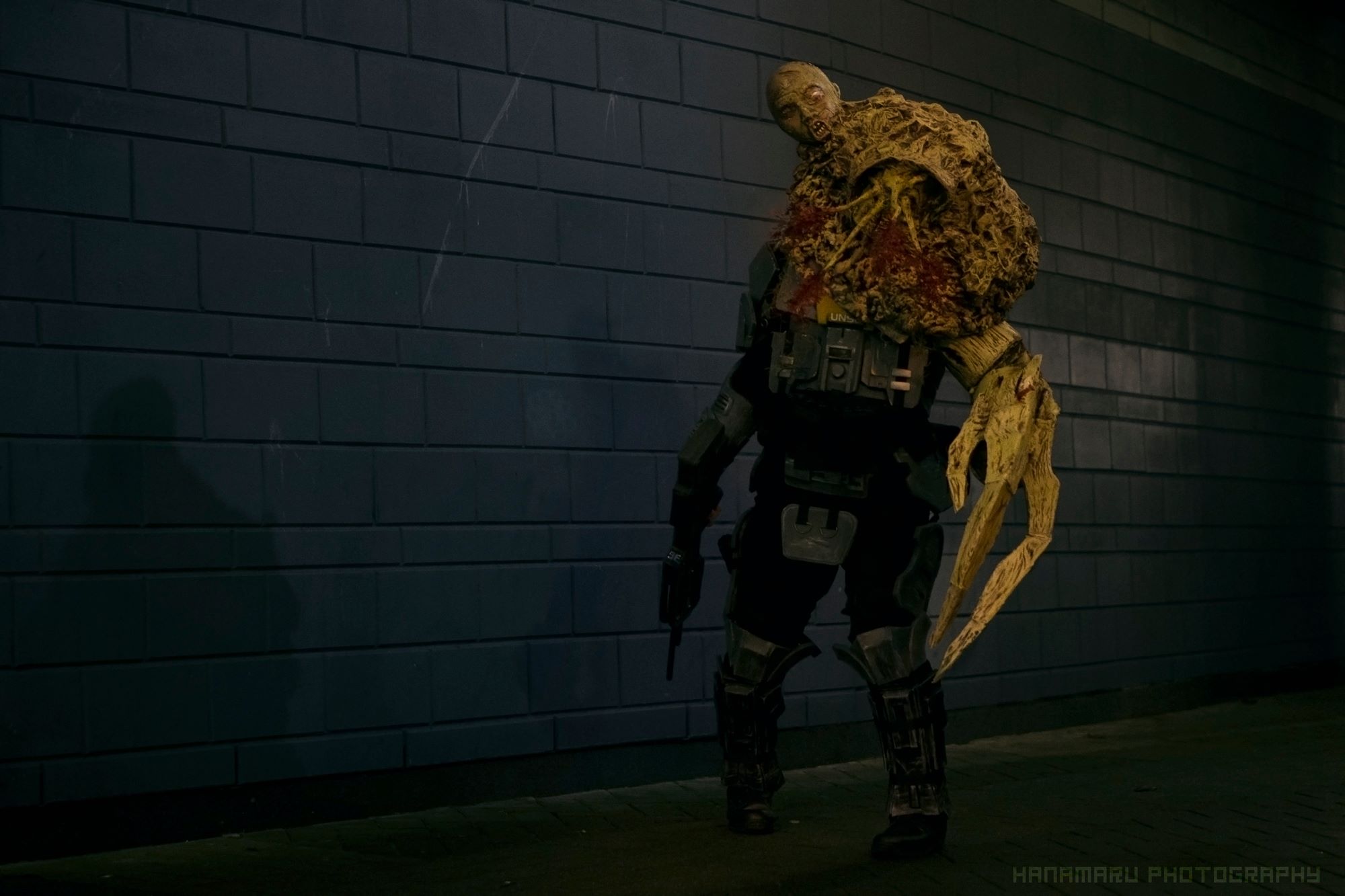 S
alternative to fibreglass and resin