As the year is coming to an end, so is our series of Free For All 3D models for this year. Don't fret, there's (a lot) more coming in 2017 -not just guns by the way-

What better way to send of 2016 than this totally awesome BR55HB, made by Trevor specially for all of you guys !

No printtest done yet, also totally no mechanical afterwork done, so that will be added later on this year. But anyone with half a brain will be able to make the model work for him/her as-is, I'm sure.

As always, if you you bump into issues : just let us know and we'll take care of it.

Have a great end-of-year you all, dispite that in the light of so much people have had a very rough 2016. Those who weren't affected : all the better and have an even better 2017, those who had their share of heartaches during 2016 : off to a new, better year.

A big "see you on the other side of 2016" from all us 3D nerds who're will continiously work very hard in 2017 trying to get you guys the best of the best just for free, because we care about you all !

We're not in it for the money, but what we would appreciate is the occasional "like". It's really that what we're doing it for. 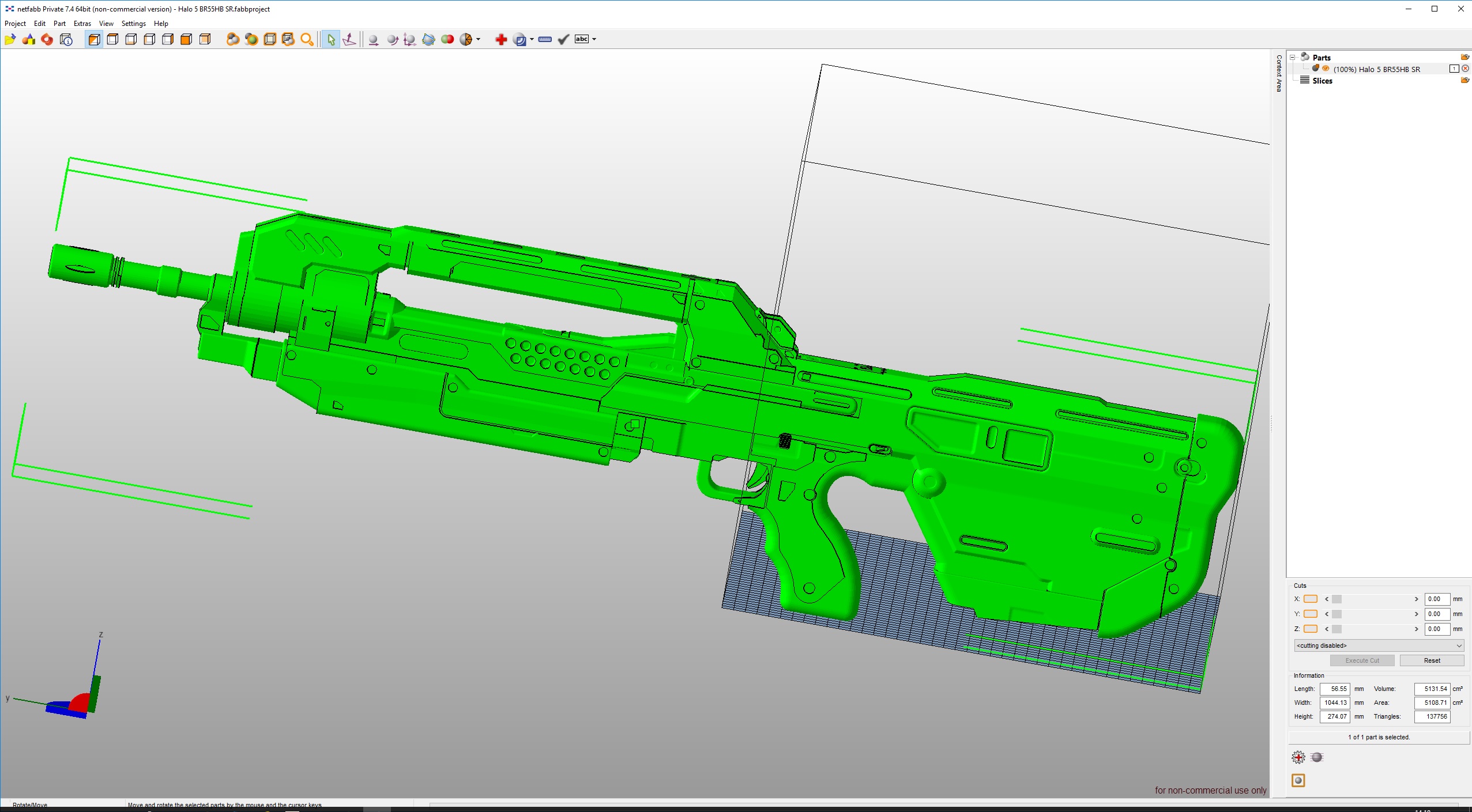 hehehe I'm SO happy you say this.

It's been a continious point of friendly discussion between me and Trevor because when I first saw this one, i had exactly the same reaction.
For me, a BR55 looks less "brawny", with a DMR-style triangle pattern on the side and a much lighter barrel front assembly. But what do I know.

Trevor swears this is how the BR55 looks like in H5. I didn't even know there IS a BR55 in H5.
Can't check that myself, don't have a Xbone, but I believe him on his word.

And indeed, when I look at the BR85-H5 resource, allthough there are many similarities, it still looks different from what what is posted as a "BR55" above. So I'll leave it to the experts out there to battle this out. It remains a nice model no matter what, and I'm just gonna take some popcorn, sit back and see how the discussions goes.

Hehehehe. oops. I've looked online for the proper name, and I always seem to come up with BR55.

PS : pretty sure that someday the real BR55 will pop up too in a future release.

I changed my mind, maybe I will make an armory.:lol

and, Kris, I can't say I've seen you beg before.


kaween said:
Lol, Maybe some admin can change the header of this thread into BR85 instead of BR55 please ? Like pretty pretty pretty plplplplpleeeeaaaaase ???
Click to expand...

Done. I am awesome. Not quite as awesome as this model is, mind you, but it's still pretty damned good.
K

We know you are, Cherry. *bows*
Thanks !

I'll be honest, this is probably my best model, and thanks to you, Chernobyl, This thing is EXTREMELY detailed and accurate.
lots and lots of tiny details that are hard to notice. I spent about two hours just looking at the in-game model trying to find details.

my favorite parts of the model are the detailed under-railing, and the VISR-LINK area. just because of the details crunched into one spot.

fellow 405thians: you guys are the best! I wouldn't be making this stuff if I didn't have a good reason to do so

Midwest Regiment
Damn. That IS a lot of detail. Now if only I had a 3d printer...

Pacific Regiment
Washington
Thanks, man! your work is great, and I'm honored to hear you like our models!

I've always had fun with 3D modeling, and I want to do more.
for now, I'm working on a scattershot for Spartan55, and I've got a few other models comin'
including a HD railgun (which isn't really needed, I just wanted to model one)
also..........
Eh, I don't know...we'll see what pops up.

I think we Spartans (and ODSTs) [and marines] will have PLENTY of guns to shoot stuff with.
Last edited: Feb 5, 2017

Midwest Regiment
Just want to point out that the BR55HB SR is actually the halo 3 variant, and the BR55 SR is the halo 2 variant, which is also seen in halo 5. I'm not trying to be some elitist "lore expert" or anything, since I'm not, and honestly I don't really care, but you might confuse people on accident.
K

European Regiment
hah ! nothing "by accident". Pretty sure it was all a ploy by Trevor to confuse the hell out of me.
I'll hold back on my version of the railgun as I never got it completed like I wanted (IE, with decent electronics to mimmic the gun firing. The model's good enough, but without the firing tube it just feels "off").

And yeah, the idea of FFA is to provide a decent library of free to use models. The idea first came to me after realizing just how "off" some of the free models are, like for example the pretty poor MA37 on Thingyverse which -with all due respect- looks nothing like a MA37 should look like.

But it's not limited to guns only. Other stuff will see the light of day too under the same flag.
Last edited: Jan 4, 2017

Pacific Regiment
Washington
oh, yeah....that was completely by accident. what would we do without you, Frosty? I'm glad to have you watching my back, brother. and BE the "elite explorist" if you can. we need people like that.

unfortunately, I've already confused the crap outta' Kris with this BR55....Eerrr...BR85HB SR (Hehehe)
I think the frontal and parietal lobes of his brain are permanently damaged, and scarred for life. Because of ME! why ME?!
now that I think about it, my brain's probably paying for that mistake as well...

Midwest Regiment
It's ok about his brain, I'm pretty sure he has the 3d skills to just print himself a new one

maybe I can help him put the new one inside his melon when he needs to replace it.

If he turns into Franken-Kris, It's your idea, Frosty. I'm assuming you'll take responsibility for that?