Midwest Regiment
This. Is. So. COOOOOOOL. I've always had a soft spot for the M-73, good to see it get some attention.

Pacific Regiment
Washington
Prrrrrrrogress update! Finally with my internet back and some sunshine I can show you guys a little bit of progress. All the pieces have almost all the pieces are sealed and ready to go. The Chest, a thigh, and a shin are all that's left in this faze. I have the base metal color on a lot of the pieces and today tried putting the base colors onto a few of these pieces. With my minty toothpaste I dabbed the pieces up where I wanted the paint to be warn off and sprayed on two-three laters. I actually just finished wetsanding the hands and one of the boots and I am quite happy with how they turned out . Its just the base coat so I still need to paint brush on the rest of the colors. I might tape off some things and spray them, but a few pieces will be tricky if done like this so painting by hand and them wetsanding again will do just fine. Still a lot of painting to go, but they are starting to take shape: 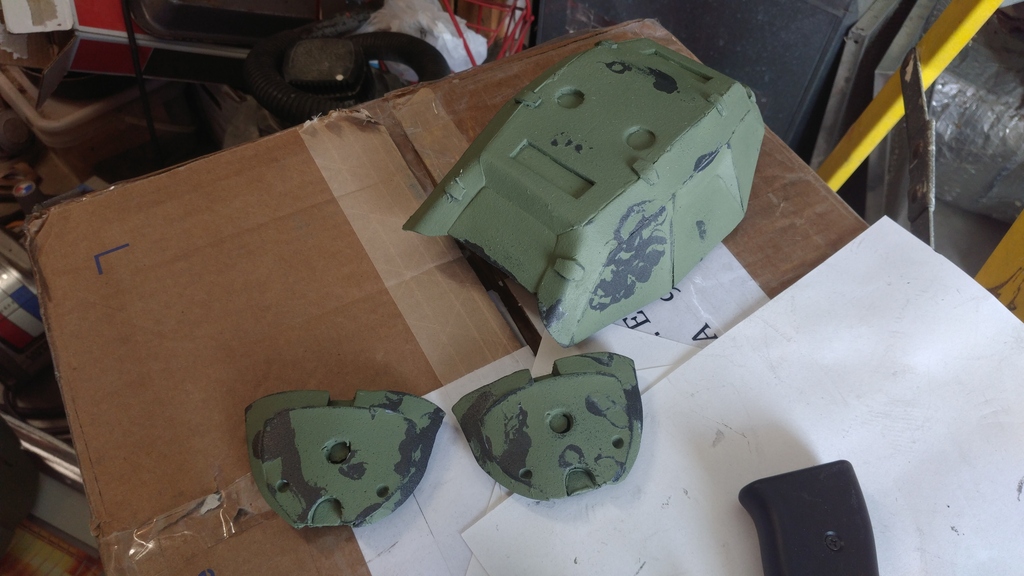 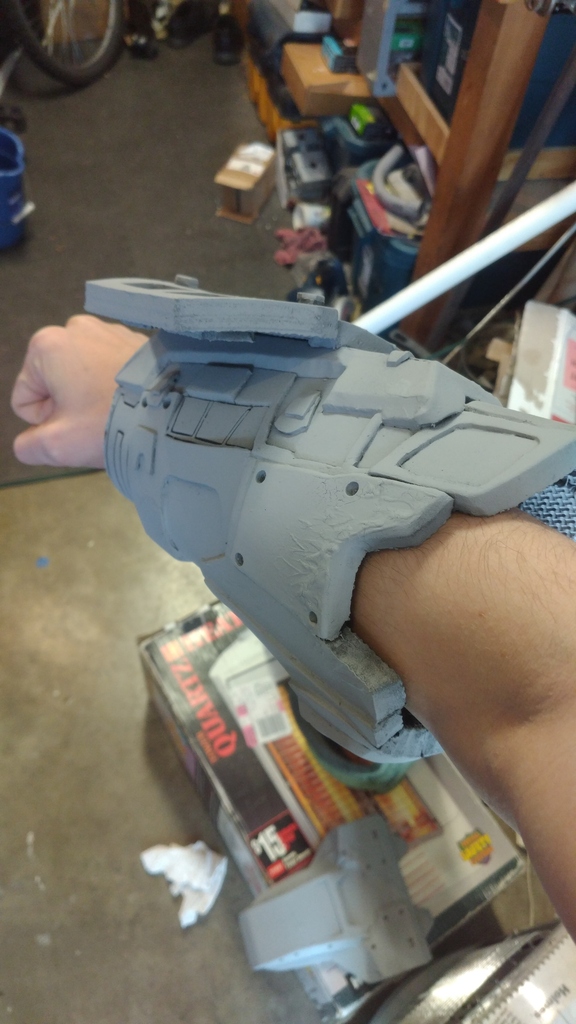 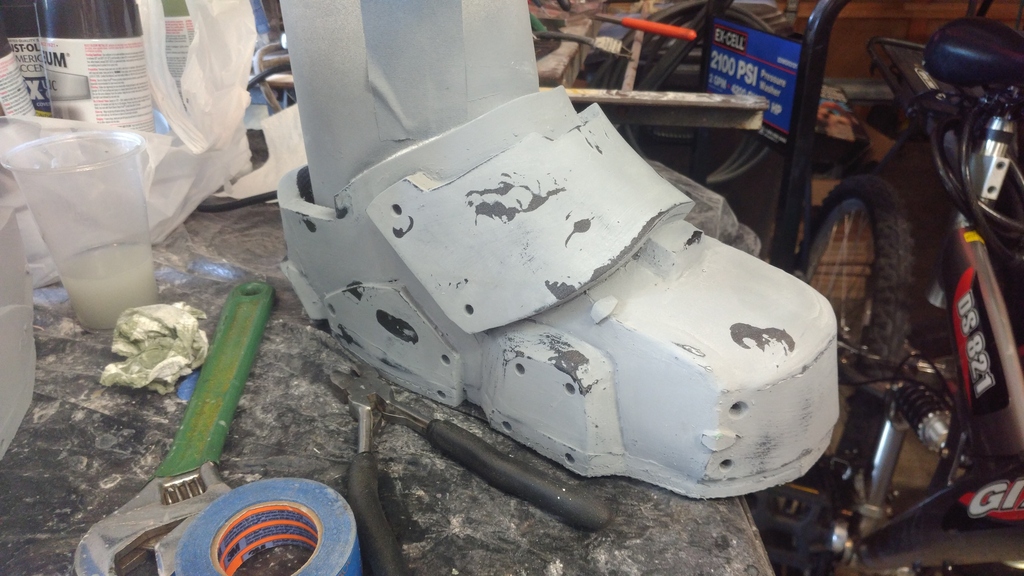 Here are the boots side by side, one has been wetsanded and the other has not. 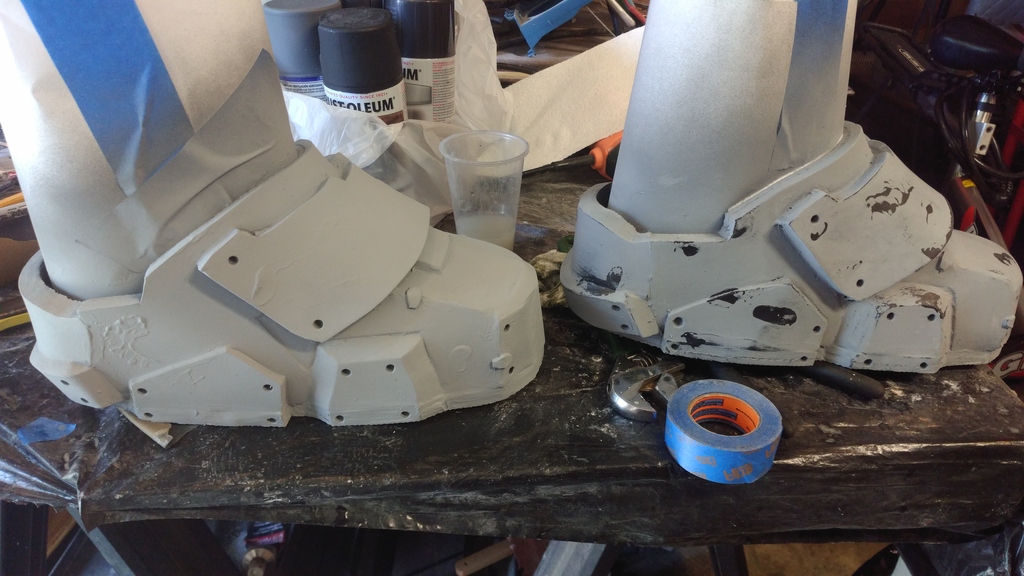 Other than that, I met up with the amazeballs mblackwell1002 again and got my armor ability module. The front and back separate so that you can wire the module with lights. A light sanding and it will be ready to paint. I also got my visor from stonyprops on etsy and I cant wait to have the helmet done and it installed. 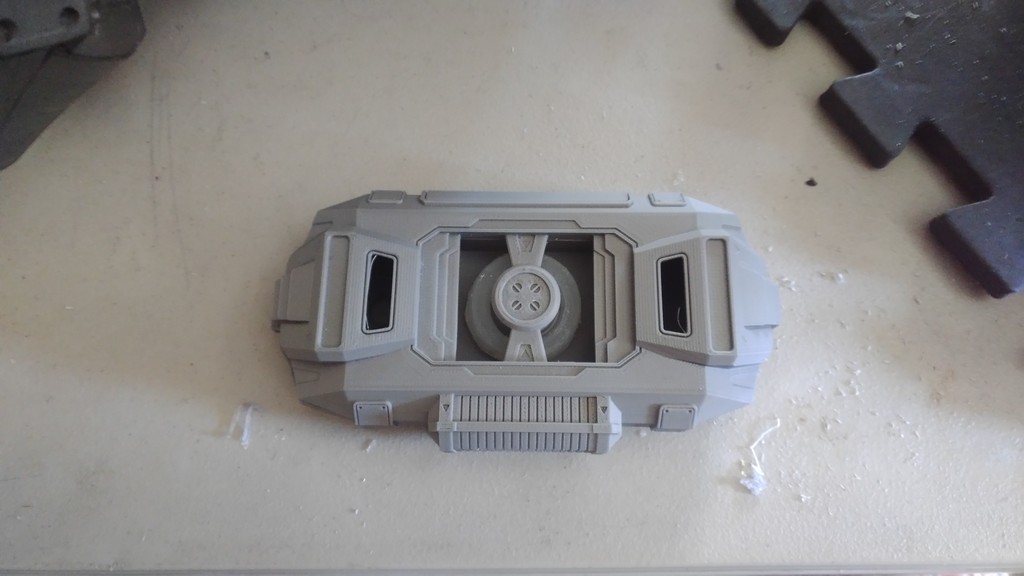 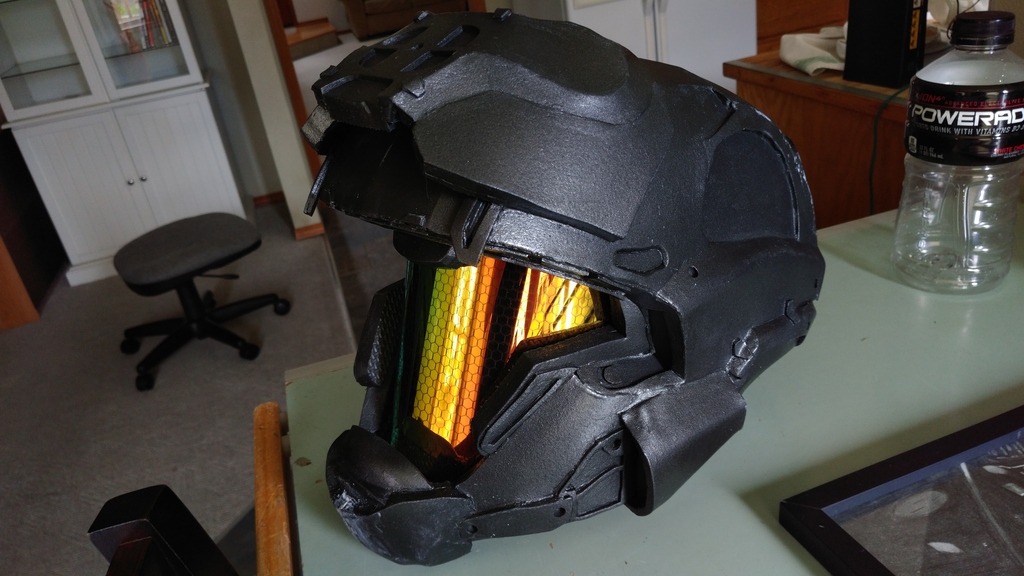 Midwest Regiment
Haha every time that I come back on to the 405th after a few weeks you've made great progress! I really do need to get back on the forums though...

Colonial Regiment
Looking great. Just curious what it is exactly your wet sanding? Is the plastidip texture or just sanding to weather it? Can't wait to see the armor ability all lit up!

StayFrosty said:
Haha every time that I come back on to the 405th after a few weeks you've made great progress! I really do need to get back on the forums though...
Click to expand...

Thanks man, and yes, you need to get back on the forums. Progress is slower than I would of wanted, but progress is still progress.


SI3RRA 117 said:
Looking great. Just curious what it is exactly your wet sanding? Is the plastidip texture or just sanding to weather it? Can't wait to see the armor ability all lit up!
Click to expand...

So after every bit of painting or sealing I have been wet Sanding the entire piece. My first wetsanding was after the Mod podge and kwik. The second was after the metal color and then the third was after this base color. My hope is only one more wetsanding per piece cause so far I'm doing a lot of wetsanding. Let ke just say though that it's heavilyworth it. I did a few more pieces and they are immensly smooth, no paint feel what so ever which vastly helps with the armor illusion.
So I only had the shoulder and helmet in plasti, after that I switched to my own process cause I didn't like how it was (mod, kwik, mod, wetsand). Yeah, if I am a bit rougher it greatly helps with the weathering, but at this point it was mainly for getting off the toothpaste which really stuck on there.

Canadian Regiment
405th Regiment Officer
The paint and weathering are looking incredible! The unpainted black helmet with that orange visor looks badass man, I can't wait to see that of all things painted! Keep up the progress! It's getting so close!!

Thom A293 said:
Thanks man, and yes, you need to get back on the forums. Progress is slower than I would of wanted, but progress is still progress.
Click to expand...

Haha don't even talk to me about slow progress! I keep saying that I'm going to finish my non-halo project soon, but it's taking forever, and stopping me from starting other projects. I really need to buckle down and get it done!

This is looking spectacular man!!!

Pacific Regiment
Washington
Small update, so I finished sealing the rest of the pieces and sprayed on up to the metal coat (except the chest). The rest of the pieces I had that needed to have the toothpaste wetsanded off were completed and they look quite fancy. There is still a bit of toothpaste residue that seams to keep appearing on the parts, but I'll just do another quick clean and they will be fine. 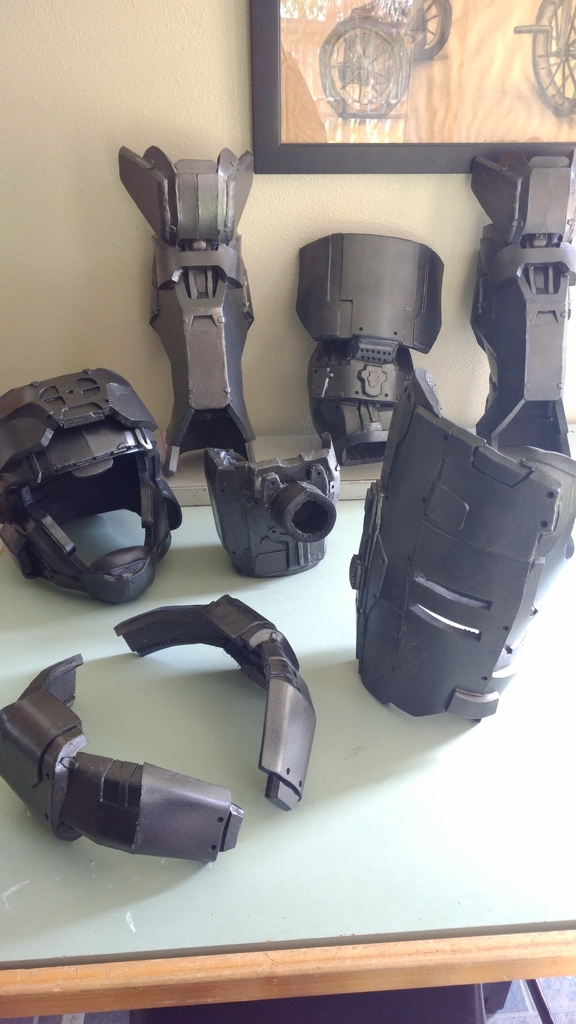 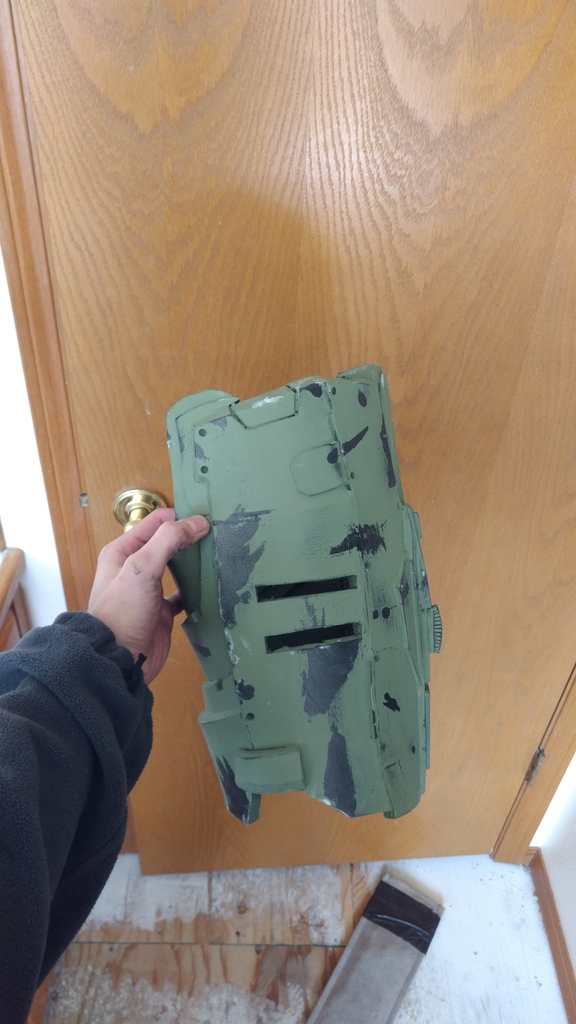 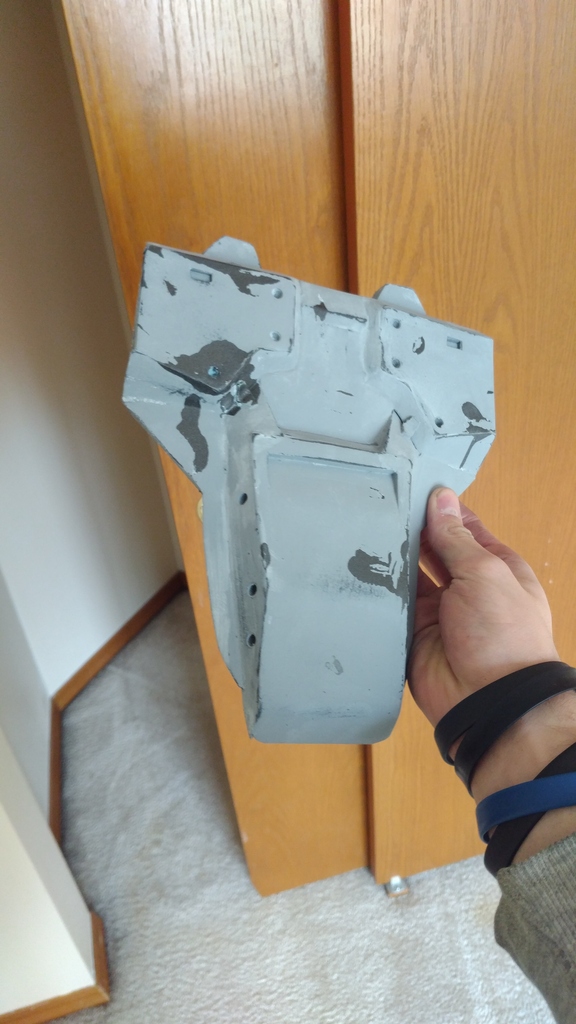 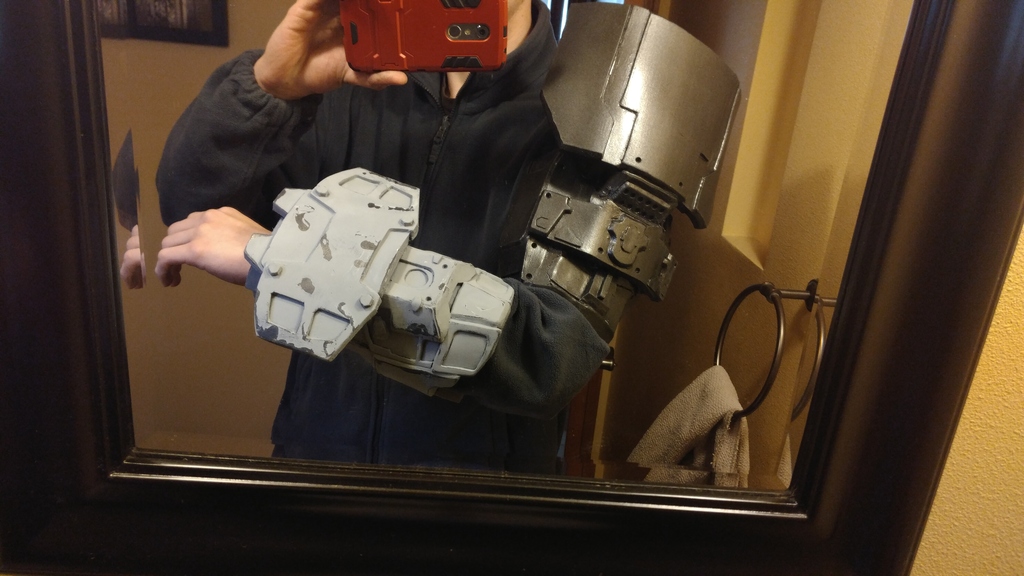 Getting close to being able to full paint the suit I went back to the drawing table and took another look at the paint scheme I had for the suit. I actually really liked how the grey turned out on my forearms and boots so I wanted to incorporate that more into the suit, I also added a dark grey to replace the black I thought was a lot of the details on the suit when it wasn't. 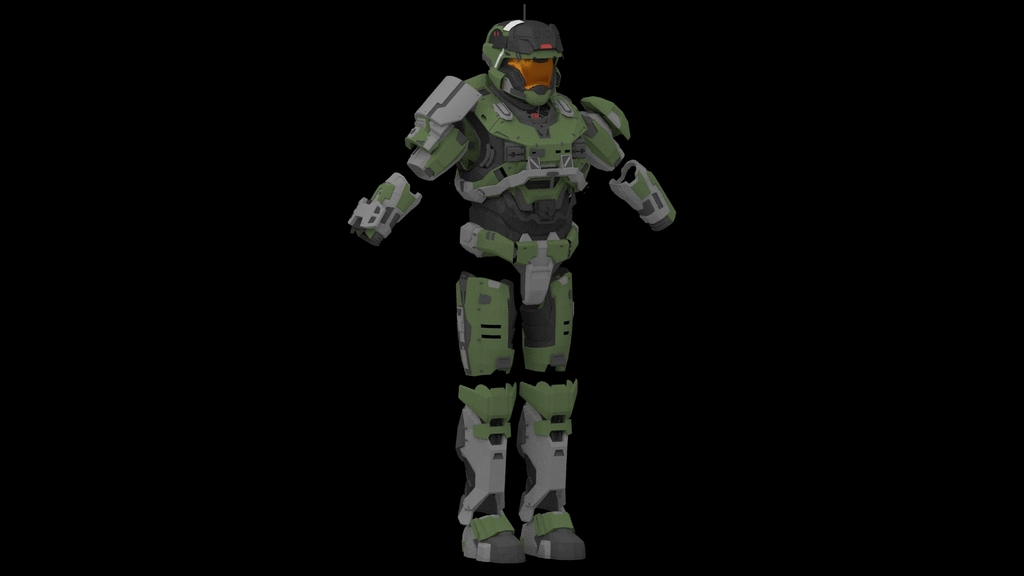 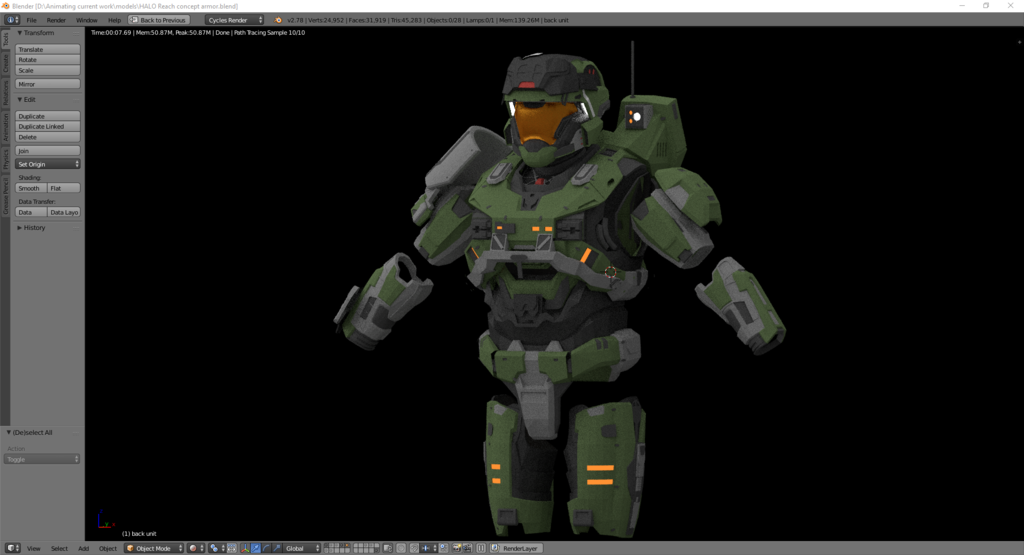 I was thinking and thought I showed you guys the finished pistol but looked back and saw I didn't. Soooooo, here is the complete pistol. It has a total of about half a million vertices and I already split it apart for printing. I was going to have the long barrel and stock and such, but as I got further into the stock it was looking less like the m6. Plus the long barrel was hindering on the look since the socoms front attachment is a suppressor, so I cant go barrel, suppressor, and then back to barrel.. I tried extending the suppressor but that's when it looked bad in my opinion. To save me from all of that and keep it about the size of a sidearm and not a carbine, I just kept it as the pistol. 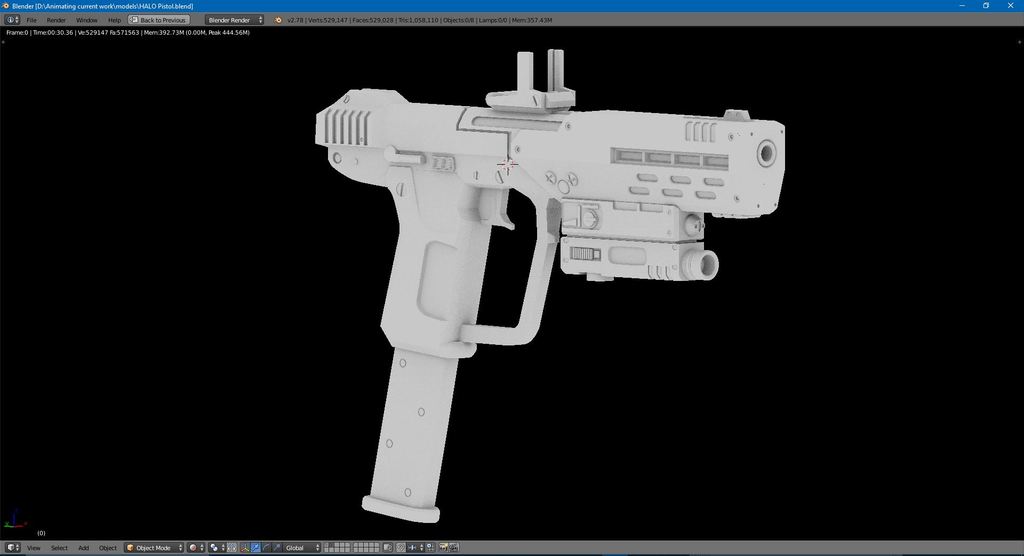 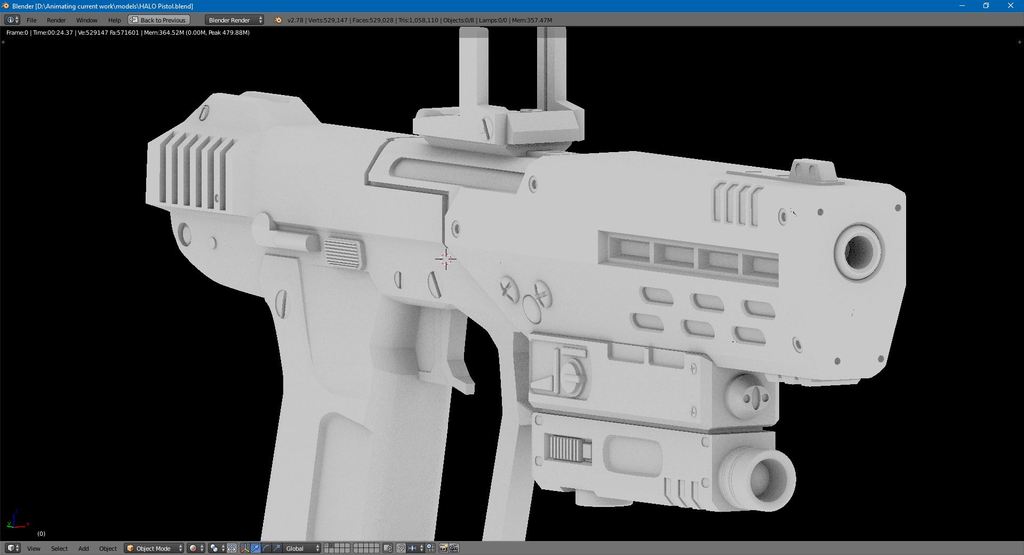 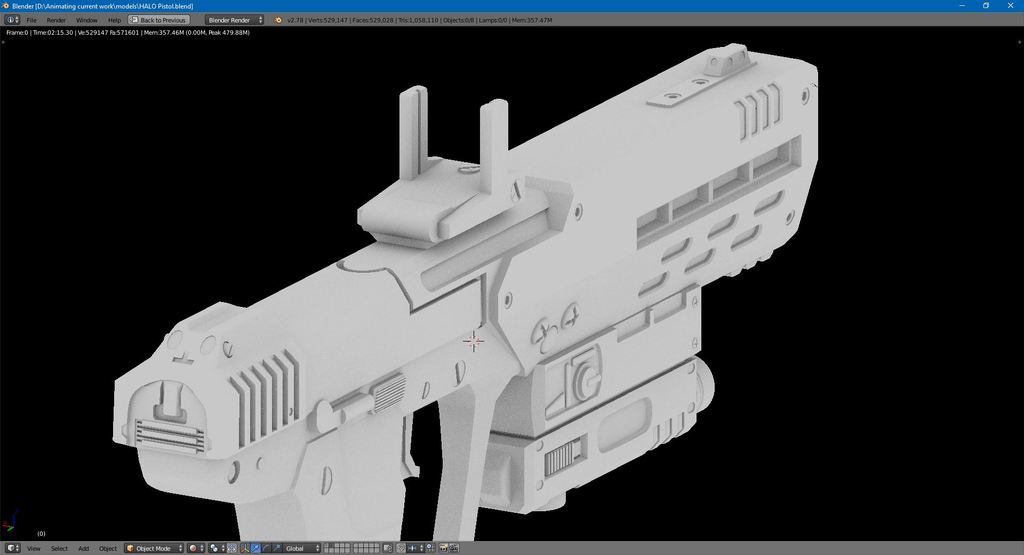 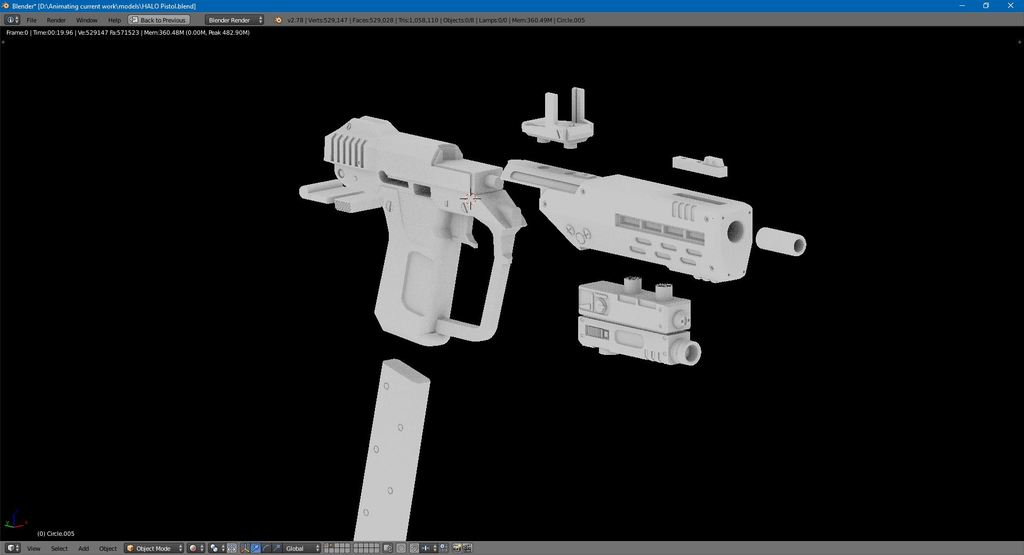 One more thing guys and galls....
Don't look now, but if you go to the 405th home, you will see that there are robots online. There number was a little high so be careful and keep that m6 on your side ready... just in case they try anything fishy.

Pacific Regiment
Washington
So I got a question... What are some crazy strong magnets that I could use to hold the front and back half's of the chest piece together? I bought some but they are too weak, but I don't want to so strong as to lock together and snap the glue off.

Canadian Regiment
Look for rare earth magnets. They have a more technical name but, it escapes me at this moment.

There are different grades of rare earth magnets which indicate their strength. Here is a calculator so that you will know if the magnets you are buying are strong enough. I wouldn't recommend buying them off this site because they are much cheaper through ebay.
K&J Magnetics - Magnet Calculator

Pacific Regiment
Washington
I have not forgotten!
The suit has been a slow pace but it is still moving. Right now it has mainly been a lot of painting and painting on the suit. All the pieces are quite close except the chestpiece and the helmet, both of those are mainly a solid green. 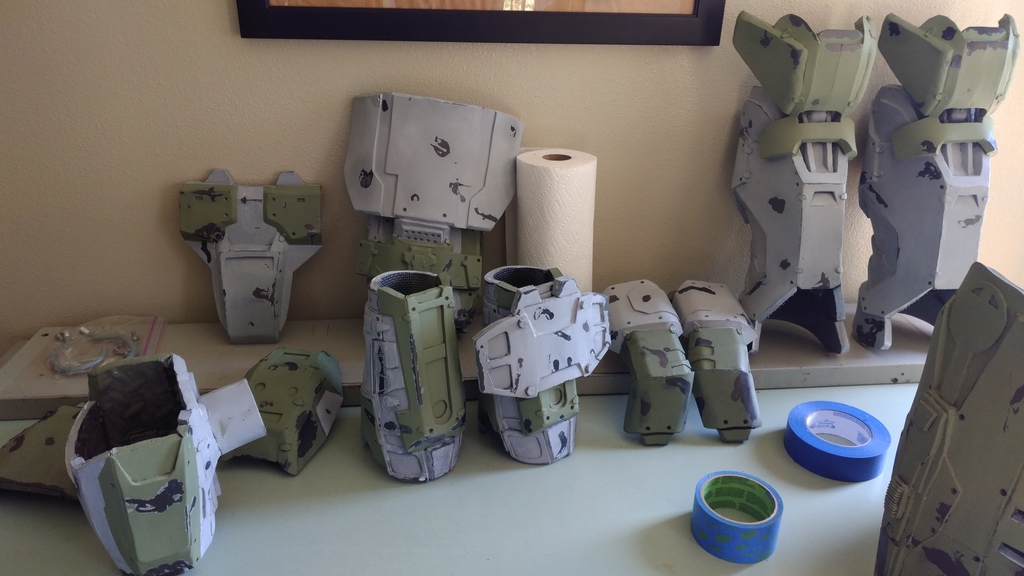 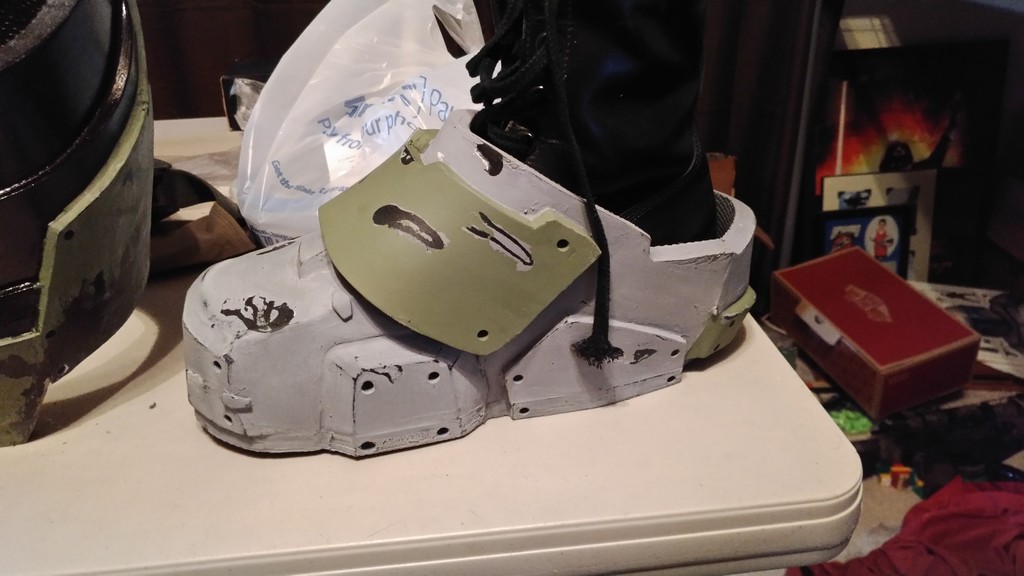 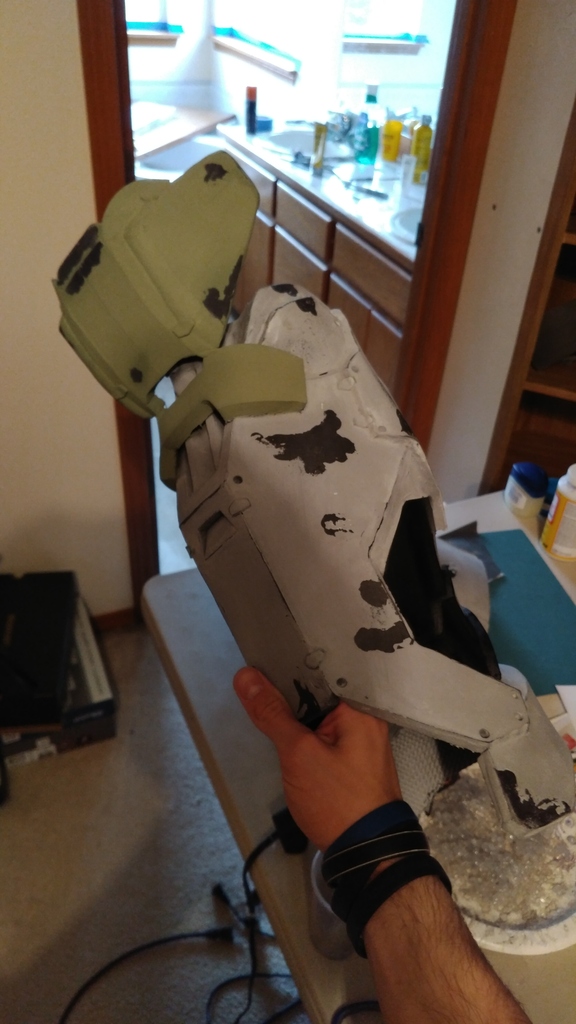 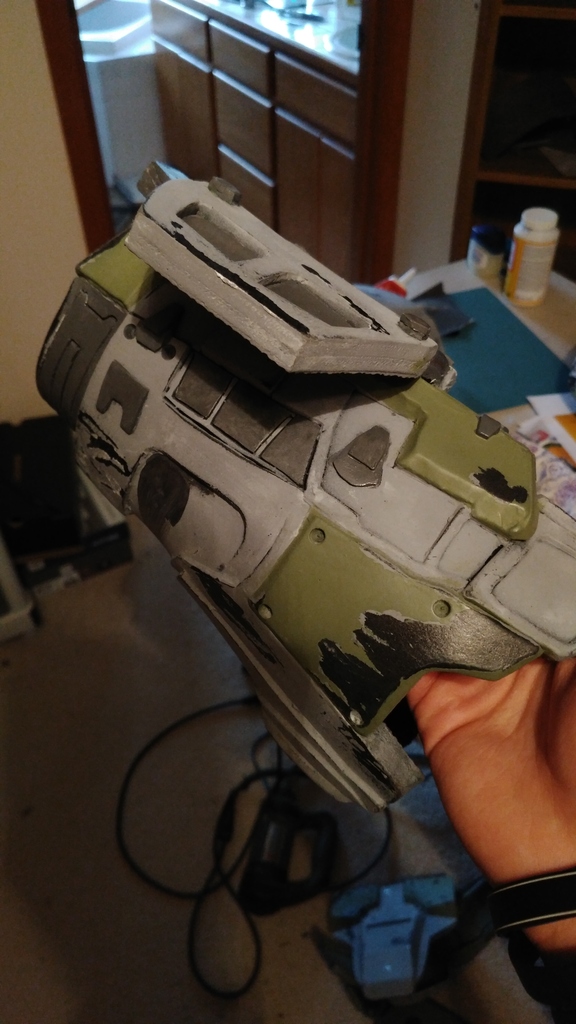 Previously I had been talking about how I had been using toothpaste as my paint coverer and was praising it. Yes, it created a result that looked quite good, but it was a pain to clean up and take off... I then tried Vaseline and low and behold it created a better result and came off super easy ... Why I hadn't been using that before I don't know, but in short don't use toothpaste, use Vaseline.

Not relative to my suit but still halo cosplay, my friend got two molded helmets that he wanted me to fix up and primer. I was super jealous cause the noble 6 was a regular $130 I think, but the original mark he got for $10. Anyway, they were quite fun to do the touch up work on, removing the seams and such. I cant rn but ill post pics of those two helmets later.

What I will do to keep hopefully more posts going is each armor part I "finish" with the basic painting I will post some pictures of it.

Looks sick man! And show us a premature suit-up!

Colonial Regiment
Once everything is painted are you going to give it all a black wash? It's going to really bring out the detail you have built into all of the armor.

Looks sick man! And show us a premature suit-up!
Click to expand...

Yeah lol, it did take a while. Once I get the magnets for the chest I will do a suit up for ya guys. Can't do a suit up if the chest piece won't stay.


SI3RRA 117 said:
Once everything is painted are you going to give it all a black wash? It's going to really bring out the detail you have built into all of the armor.
Click to expand...

Yes, my plan is to do a black wash with a few other weathering colors on the armor. There is quite a bit of painting I still got to finish beforehand though.