Re: Gears of War Anthony and Clayton Carmine WIP

Progress on the other helmet. Sadly I realised I did not build the details accurately, maybe I will change them. How does it look so far? 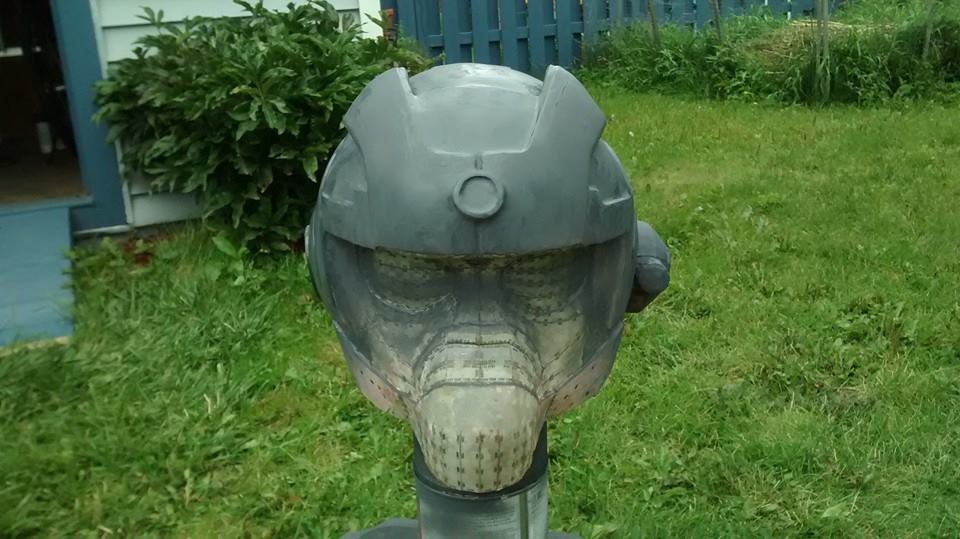 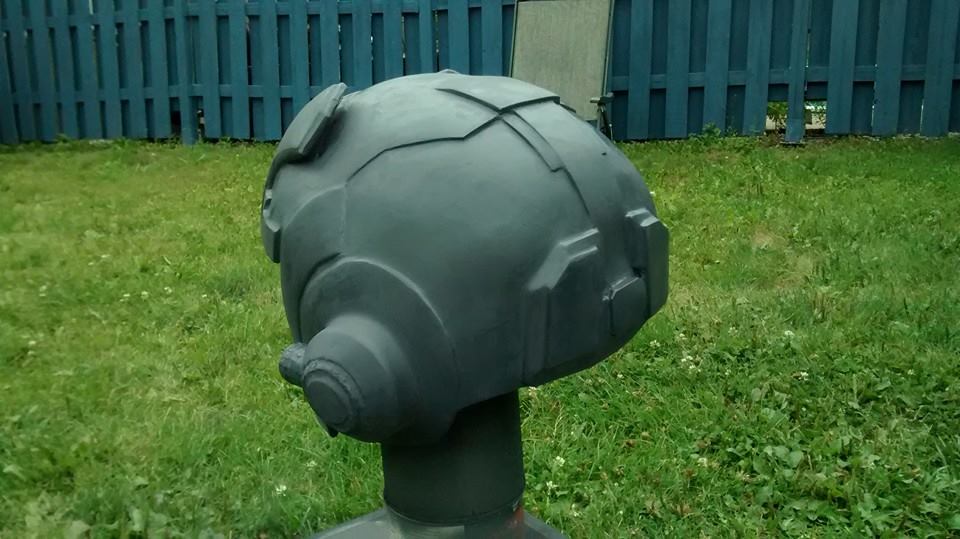 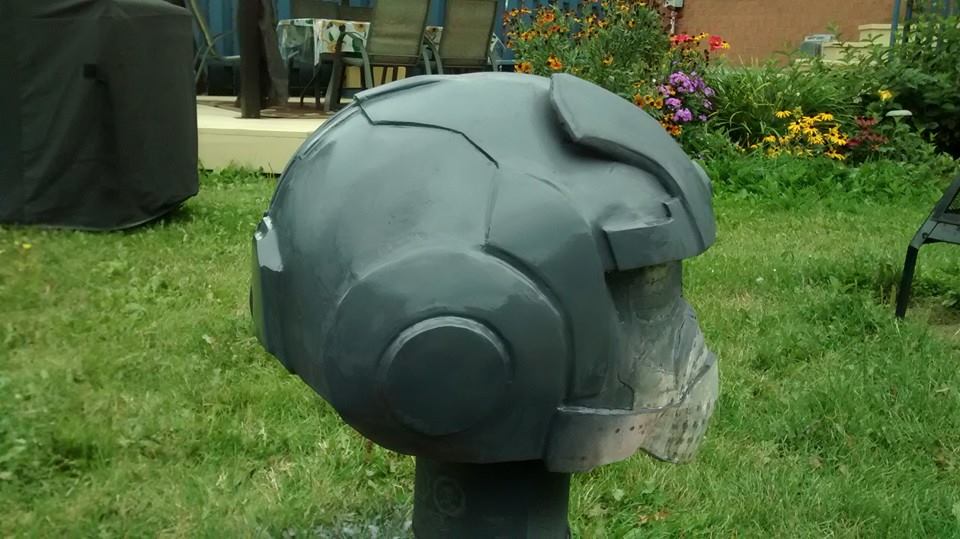 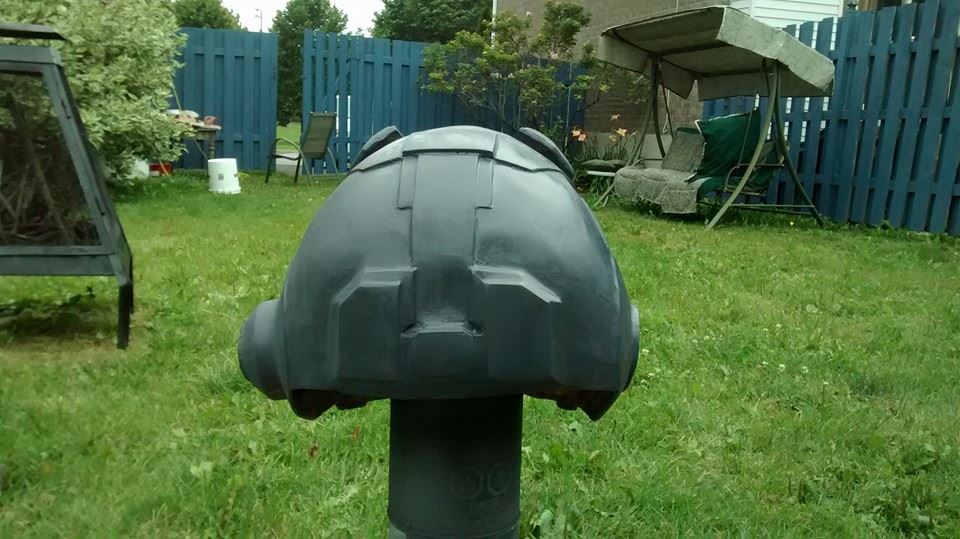 And here is a nice picture of Clay's helmet 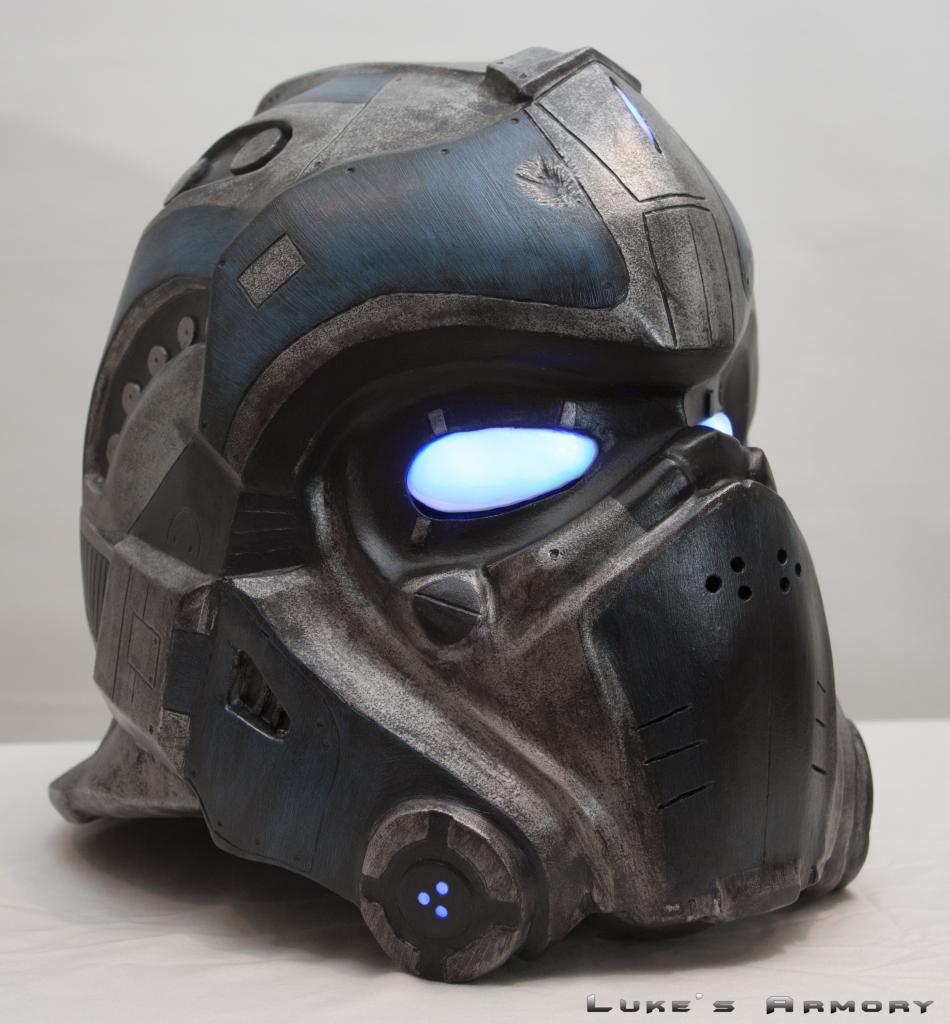 I updated to opening post and I will continue to do so from now on. I will keep the latest pictures there, so new visitors can quickly see where this is at

Me with the helmet

I gave the helmet to my friend (oh I'm so sad haha) and he tried my chest piece on. It's the the right size at all and not the chest piece to go with that helmet, but the back looked pretty good.

I have pretty much finished my Anthony Carmine armor. I would like some advice on armor strapping for the knee and shoulder pads!

One strap for each shoulder pad and it's not enough. I need suggestions on how to make them hold!

Same problem here for the knee pads, but worse! It doesn't hold at all. I am not sure if I'll have the funds for the proper undersuit, but if I do, I guess I will use velcro.

are the sholder pads sliding down, if so maybe use a harness and strap the tops of the sholder plates to that
something like this - http://www.skdtac.com/Tactical-Tailor-Mini-MAV-p/ttr.129.htm
knee pads can maybe rig straps to the belt
B


Blorin said:
are the sholder pads sliding down, if so maybe use a harness and strap the tops of the sholder plates to that
something like this - http://www.skdtac.com/Tactical-Tailor-Mini-MAV-p/ttr.129.htm
knee pads can maybe rig straps to the belt
Click to expand...

I guess I could somehow attach them to the chest piece and it should work.
B

Great job!! I've never been a fan of the Gears of War but I'd totally wear that into battle lol. Keep it up
B

I finally started my friend's armor. The con is in less than two weeks :O and I am so stressed! I will certainly not have time to finish my helmet... but at least I have the rest of the armor. I worked 8 hours today on his chest piece, this is it so far

It's not the right size for me, way too big, but it should fit my friend perfectly. This is just to show the base shape, which wasn't so easy to do.

Started to build up the details. It's going somewhere!

Chest piece ready for plastidip. That's the best I could do in a week. I still have the belt and the boots to do if possible and the con is in 3 days :O I won't have my helmet done, so I won't go as Carmine A. but as classic Baird

Good detail on both pieces. Best of luck getting as much done as you can before the con [emoji4]

AHHHH man! That is looking mighty sick man. That is a wicked looking gears setup can't wait to see more.
B

Thanks guys! Chest piece and belt plastidiped and I'm currently painting them! I have maybe 1/3 of the job done on the boots... I will finish the rest and then see if I have time to complete and paint the boots. My friend is coming over today and the con is in 26 hours!

Well, 12 hours only before the con! I've tested my armor, everything's pretty much OKAY Except maybe the boots, the foam is bending near the shin piece and now it doesn't look too great. I guess it's normal wear and tear! I've painted my friend's chest piece and belt. Tomorrow first thing in the morning I'll grab some LEDs for this armor. I did not have time to work on his boots. He got here early and I couldn't work as well. Painting took too long anyway.

Oh man! getting there but it is looking good man I hope it all works out for you in the end.
B


Harri51 said:
Oh man! getting there but it is looking good man I hope it all works out for you in the end.
Click to expand...

Thanks! It's really nice to have somebody keeping an eye on the progress!

no prob man my wife has been following as much as I have so. One of our favorite games.
C

Man this is some badass armor. Im thinking of making gow armor and this has inspired me more! Can you show some templates? Led setup? Ive never considered working with foam until now. Also, what were you doing with that detailing on the helm and armor? Tips?
B

OKAY HERE ARE THE NEWS. Con is over! It was both hell and fun haha, but that's cosplay! I missed the stuff I wanted to see at the con and only a few people took pictures and it was mostly for my friend's costume... It's like nobody knew what Gears of War was, even though it was crowded. A lot of people were there for the Star Trek Next Gen super reunion.

I only slept a few hours during the weekend because I was trying to finish my friend's boots... Not a good idea. There are not done at all and I was just... so exhausted! It was hot in my costume and it wasn't that comfy. Three days was a bit too much with this one. I now understand why it's good to have different costumes haha. On the first day I had too much sweet in my goggles and the paint just came off, I had to repaint them and make sure I remove them or dry them once in a while after. My boots got damaged, but I guess it was only normal wear and tear. They are boots afterall! I lost two of the four bolts holding them in place though. The next morning I rush to go buy new ones... and I lost them too after about 30 minutes -_- The rest of the costume is fine. My friend's costume wasn't a problem at all since he didn't have his boots, but he didn't wear the helmet much.

Anyway, straight to the point now! This was my first time doing this, I was in the novice category. But once I was judged, they bumped me to compete in the highest ranks (master category) AND I WON AN AWARD FOR THE HELMET I can't believe I was with amazing cosplayers that won several awards and went to countless cons, but I just come there once and get a prize! I'm a bit sad though that I am the one who worked crazy, but the award is for my friend's costume haha. If only I had my own helmet too I would have two awards! There was AMAZING foam costumes over there, but all these cosplayers came to me and said there was no way of winning agaisn't me, my foam build was way too clean and smooth. Seriously, that was heart warming. The judges said the same thing, but the helmet was really all the epicness needed. I now have to finish both costumes, there's another con in a month, I can't miss it! ... If I have money haha. If my kickstarter campaign to sell some helmets (10 days left) goes well, I will have some funds. I would be sad not to wear the finished costume!

Here are some pictures! And BTW, I wrote this really quickly, I have a lot of cleaning and sleep to catch up. Sorry if there are any mispelling.

This was pretty much the crowd for the masquerade

You can watch the part 1 here http://youtu.be/NXn5jud69iE

Great job man. Congrats on the award. Keep trying and you should have them all up and beautiful for your next Con.

Yesterday at 8:54 AM
White Dragon