Midwest Regiment
After acquiring some chaps from my closet, I traced the the design onto the poster board, then onto bedsheets and finally loose stitched the 1st draft.

Amazingly, it was an astounding success! Very loose, had no problems moving about. Had to cut the tab on top a bit because it was too long, but that's an easy fix on the draft.

The problem stems with me getting the same fabric. Apparently they don't sell the same one I used for the shirt before, so instead I got this.

Your t-shirt makes me laugh. How did the shirt turn out?

Epic shirt and you're doing great so far, keep it up!

Midwest Regiment
Okay, so I managed to FIANLLY get the chaps done, but it was ALL on video. AND i don't know how to upload them on here, so here's some sucky drawings to makes things easier to understand; because if I were to explain this by words alone, even I wouldn't understand what I would be talking about.

So, let's get the EASY parts out of the way:
After getting the straight pieces sewn together, Left side, right side, ankle-cuff thing, and joining the two sides, that left the curve and trying to figure out how to get the string in.

What I did was I cut the corner diagonally to make managing the folding a bit easier. Then sewed it top, right, and across.

I then used this Nylon string to determine the top of the "Pants Entrance." After having SO MUCH allowance, I used it to match the same length as the bottom piece.

The reason for the string was because of how stretchy this fabric was and I wasn't sure if this would be tight enough to stay on. So after realizing that, I made it into a concept of having it act as like some sort of sweatpants. Before sewing the two ends together, I cut the edges and sewn it only PARTLY. leaving a hole for the string to come out.

After that, The process was complete. This was a LOT easier said than done. Had some scares where I thought I sewed some parts inside out from the other leg, but turns out the leg was JUST inside out; sewed everything the right way... -ish. Were there things where I could've done this a BIT cleaner? Yes. But... this would've been covered up by a lot of things and this was my first attempt of sewing something like this. Now I can work on armor again. 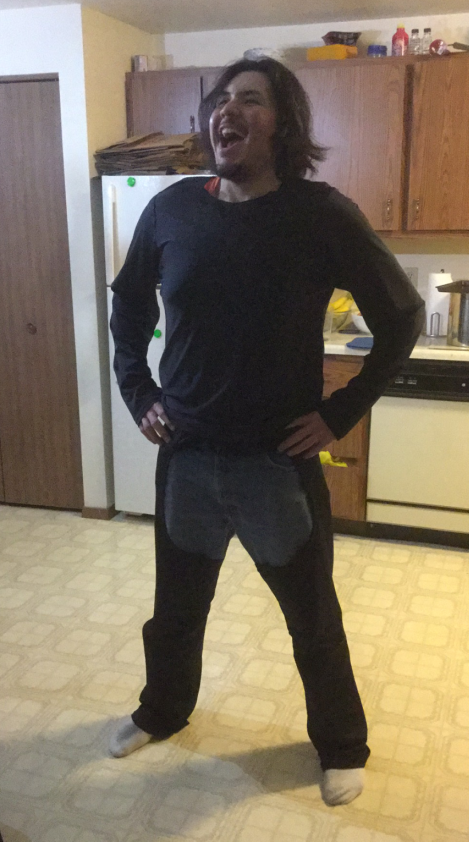 Monday at 2:32 AM
Sandbagger

Monday at 2:32 AM
Sandbagger