I'm really excited about this thread. I'm following it like crazy. Wish I could help with the props and suits, but it looks like it's already covered. Anyway, nice reel and I can't wait to see more progress!
C

my progress on the mark V helmet has been halted by my own film shoots and MAJOR car trouble i will try to get it pep resined and bondoed as soon as i can.
J

I am very happy with the progress Jester has made with the Mark V helmet so far. They are coming along very well and I'm more than happy to have his skill and passion onboard.

As promised, here is a rudimentary test clip of what a live-action Cortana could look like.

A few notes first, though:

1.) The girl in there was shot on green screen for a music video (she is an undiscovered pop artist). She wouldn't be playing the role of Cortana, as this was just testing footage (Pakistani heritage I believe?)

2.) The binary numbers and symbols aren't in place. Since this was just testing with footage shot a month ago, I couldn't execute the idea I have in regards to both getting the dark blue transparent portions, as well as the numbers.

3.) Live-action holograms are jarring to view for me.

Check it out and give us some feedback. This is a pitch trailer for the people, and we want to make it the best we can!


(Sorry this took so long to get up- I was in Vancouver for seven days, and working beforehand. Props to my fiancee for playing around and getting this to where it is!)
Last edited by a moderator: Jul 31, 2017
J

So whats the plot script for this trailer... or is there one?
S

Are you doing just a headshot, or will it be full body just like cortana?
D

The plot, without giving too much away, would recap the beginning of John 117. There will be a number of flashbacks to show his early stages, and introduction to various elements we're so familiar with today (Cortana, the Covenant, other Spartans, the Mark V armor, etc.). The ending would lead us right up to the beginning of Halo: CE.

I am considering having two other directors, cinematographers, etc. work on shooting another two short pitch trailers, which would be different than this but still put the cast and props we get in to good use- might as well make the best of them.

Santicity, Cortana will be shown in full body, as well as tight shots. I think you guys (and girls) will really enjoy how we piece her together, if everything goes well. The video you watched above isn't much as to how the real Cortana will look like. The effects will be similar, but we'll be casting a different actress for this part. Again, I do have to stress that the video was quickly pieced together as a rough edit to get feedback.
D

As for the progress, we've got some great things coming in. Jester1014 is donating his time and tremendous talent to build Spartan armor. LeeKegan is going to be doing some pistol work, and we've pretty much locked down marine and assault rifle makers.

Casting call is next week for some of the other roles- we've casted the Chief and a couple other Spartans so far. Cortana, Sgt. Johnson, and Keyes will all be figured out next Friday (fingers crossed). It is a bit odd, though, when you ask for mid-20s actresses that are fine getting body-painted and you get women in their mid-40s trying to get in on the action. We will be sure to keep your eyes from melting at the sight of something like that.

Thanks for your support! Feel free to field any questions or comments!
F

this is sounding extremely awesome. cant wait too see some more progress you have =D
D

Great to see all the progress Brendan! If anyone's going to get a halo fan film done first its you guys.
Keep it up.
D

So casting is tomorrow- the director (Keith) and I are extremely pumped for this because we've gotten a number of great applicants. We even found one woman who sounds almost identical to Cortana, which will be a huge plus. This is the question we have for you fans, though: because Cortana and Dr. Halsey are similar in both voice and appearance, is it important for you to have the same actress play both? My reason behind asking this question is that the one who sounds very similar looks like a Dr. Halsey, but not like a Cortana (the actress looks like she's in her 30s). Any suggestions? We'd love to get feedback.

Secondly, we're really trying to find someone to supply four marine helmets. There are some sweet things coming in, but the marine helmets have been impossibly difficult to find.

Please PM me if you have any leads on marine helmets, and feel free to post suggestions for Cortana/Dr. Halsey up here!

I wish I lived in Illinois, and had some acting talent, and a suit!

i know its a little late but i would love to see the scene at the begining of the first novel i think it is where four spartans fight of mmm... i think its was 4 or 5 thousand grunts which you could make via cgi i am not into it but if you have a fast computer there is a free cging software known as blender which might do it and also for realism you could make a hollow weighted aluminum cast of the rifles?
D

I have 1 marine helmet at least i can see if i have more. also charlie bell i know has some i can see if he has any for sale
D

Hey everyone- we did a preliminary casting session this past Friday to see who would be a good fit. Only a few people showed up- most of the actors that had applied for an audition said Friday wouldn't work, so we're aiming for March 28th as our final casting.

We found an actress who sounds identical to Cortana, but would like to keep searching for that happy medium between the youthful appearance and voice.

Finally, we're still looking for help in finding four marine helmets, so please PM me if you have any leads!
J

This is Final construct I was able to come up with, I still ned to Paint and add a Fan, so we have no Fog. 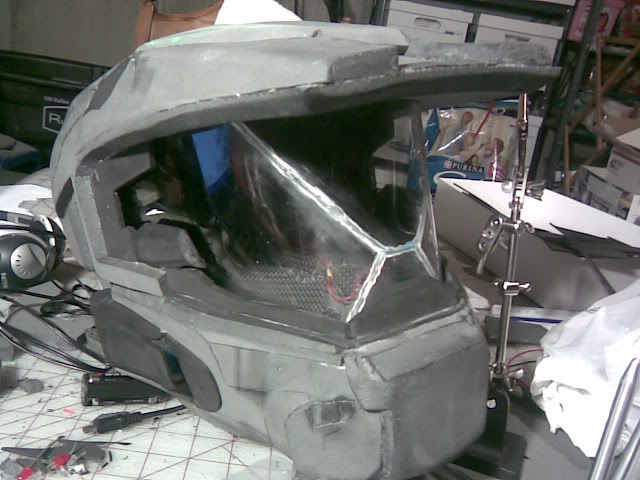 I still need to do some small detailing, but this is the best I have to offer at the moment.

That is excellent! I never thought I'd see a foam helmet that good. The detail and surface is smack on. How long did that take you?
S

Wow that's a nice helmet. i'm really digging the visor and the wear on it. Can't wait to see the finished product!

Southern Regiment
it's nice and all but as a film worker my self i got a trailer in the works for my mini show about a group of marine a two odst i call it life pod but hey it's just one of the many small projects I'm working on. i might let you guys on when you get done.
D

foxleader said:
it's nice and all but as a film worker my self i got a trailer in the works for my mini show about a group of marine a two odst i call it life pod but hey it's just one of the many small projects I'm working on. i might let you guys on when you get done.
Click to expand...