I'm now engaged in an epic struggle to cut, file, bend, fold the front row of needles so they can retract fully. All the rest of the rows are simple to retract in comparison. Only the front row has to fold up to get into the nose section. That, my friends, is no small ask. Right now, I'm within about a half inch of getting that front row fully retracted. I have a plan. I just need to get back into the shop.

Hopefully the next update will end in four rows of retractable needles.


Redshirt
Guess who's not coming back from the Slayer match--the guy in the Red Shirt
Current Project: Needler Multimedia Arduino-Driven Animated Airsoft Prop (Everything the Neca Needler Could Have Been)
Signature Project: Halo 3 Working Airsoft Spartan Laser in Metal & Fiberglass
Last edited: Apr 29, 2022 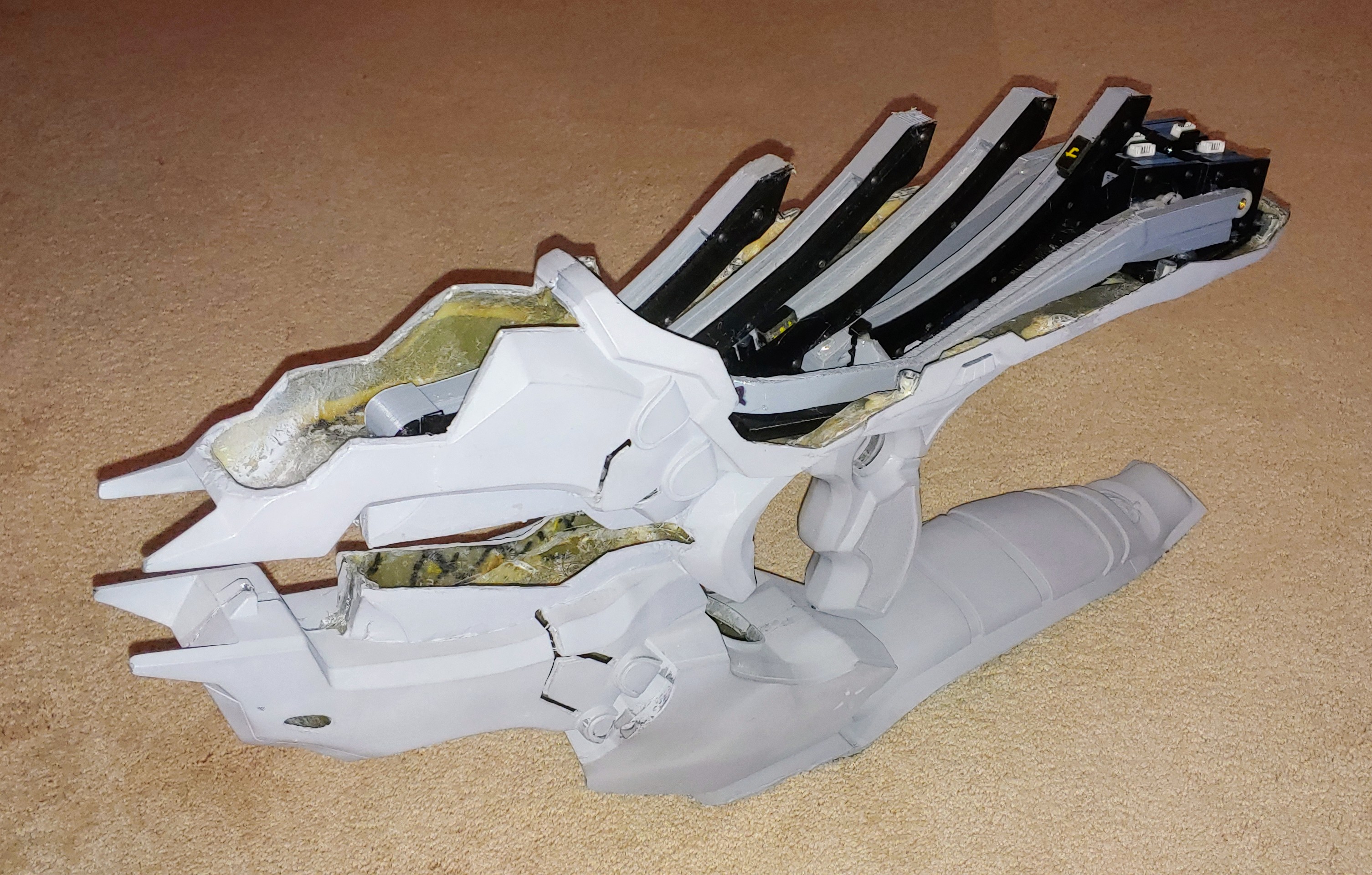 Well I'm close to the goal named in the last update. I have the whole retraction system test fitted! Ideally this needs fitted with the top shroud in place. I found this nearly impossible with so small of an access point. What I ended up doing was to apply hot glue to the top of each retractor and fit it in by sticking it to the top shroud. This is not how they will go in the final build as they will instead be bolted to the lower sections. After getting all four retractors fitted I lifted off the shroud/retractor combo and used more glue to attach the retractors to each other to lock down their placement relative to each other.

Of course I needed the needle rows in place to see how they looked and if there was enough room between retractors for them to move. They stick out much further than they did on the original prop so that helps with the goal of making this look more aggressive too! 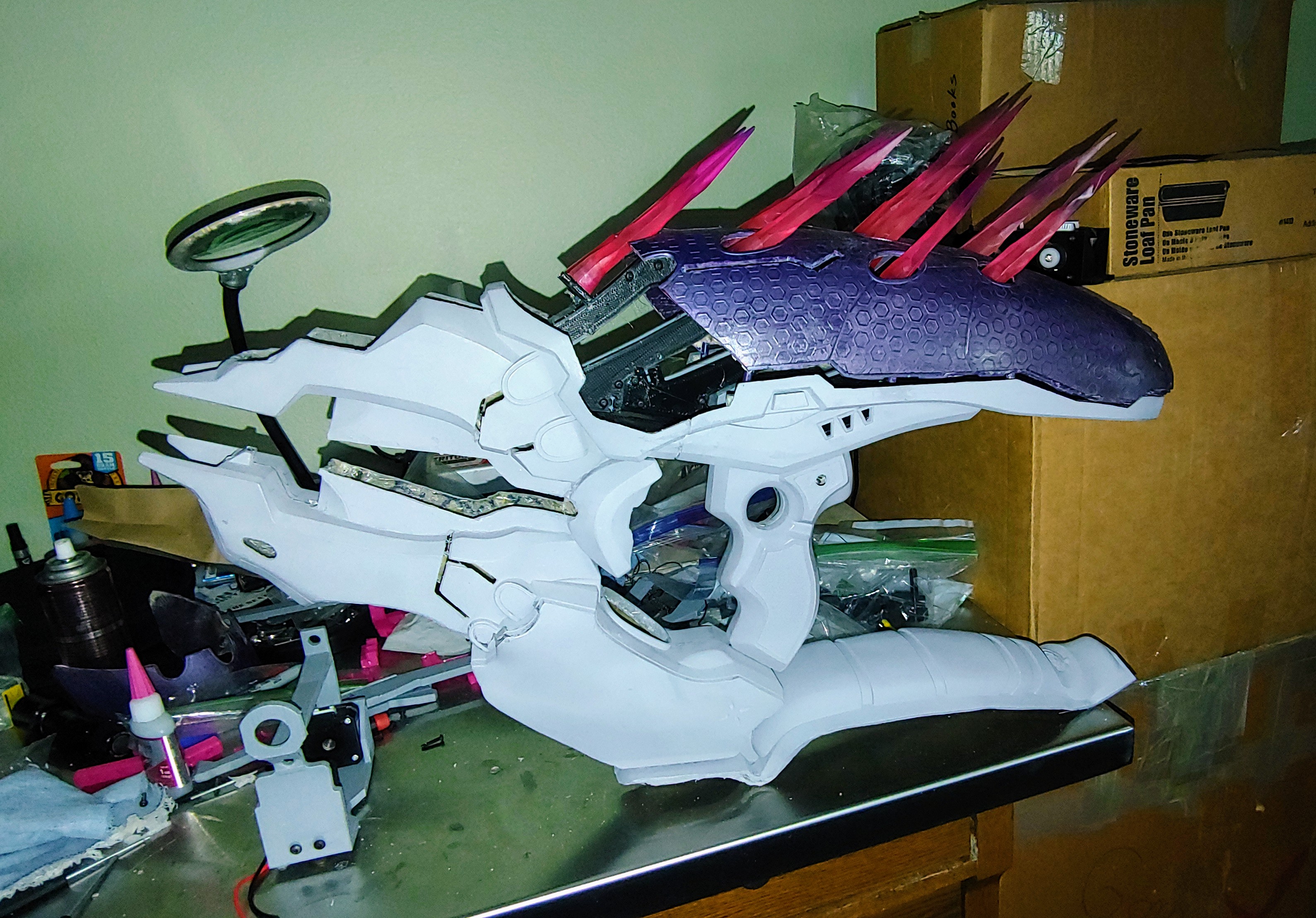 My next move was to put the shroud/retractor combo back in place onto the chassis/space frame combo and break out the glue gun again to tack the retractor formation to the chassis in the few spots I could reach. You can see in this photo that the chassis (black floor area) has lots of elevation changes and features that make correct placement of each retractor both difficult and critical. But I'm the genius that designed the system so I'd better be happy to live with it.

Now I broke out the heat gun and roasted the surface of the shroud to break the retractors free, leaving them precisely placed on the chassis.

I took the opportunity to fit up the ancillary components as well. That includes the cable runs and and four stepper motors. I'm using a synchromesh cable to drive the needle rows up and down. In some of the photos you can see the shuttle inside each retractor that the needle will mount to. The shuttles will hold the two ends of the synchromesh cable. The cable runs both directions through the retractor, through the cable runs and around a cogged pulley on the stepper motor. This system will allow precise and rapid positioning of the needles with each shot. I chose the smallest stepper motors that I thought were powerful enough for the job. In this case, I used NEMA 17 Short motors. Even though they are much smaller than standard NEMA 17s, they still weigh a bunch and take up lots of space.

So I think my system is going to work. My only real problem is still the front row. That row has to fold or hinge to fit through the throat between the front of the shroud and the nose of the gun. You can see how tight this space is.

I think this will require a redesign for the needle carrier, some aggressive Dremelling of the passage, and possibly some changes to the retractor.

Redshirt
Guess who's not coming back from the Slayer match--the guy in the Red Shirt
Current Project: Needler Multimedia Arduino-Driven Animated Airsoft Prop (Everything the Neca Needler Could Have Been)
Signature Project: Halo 3 Working Airsoft Spartan Laser in Metal & Fiberglass
Last edited: May 21, 2022