What a huge improvement! Digging the red accents and the attachments!

I finally started making stuff fast! Hopefully this armor will be done in less than a month.

Here is how the shoulders turned out: 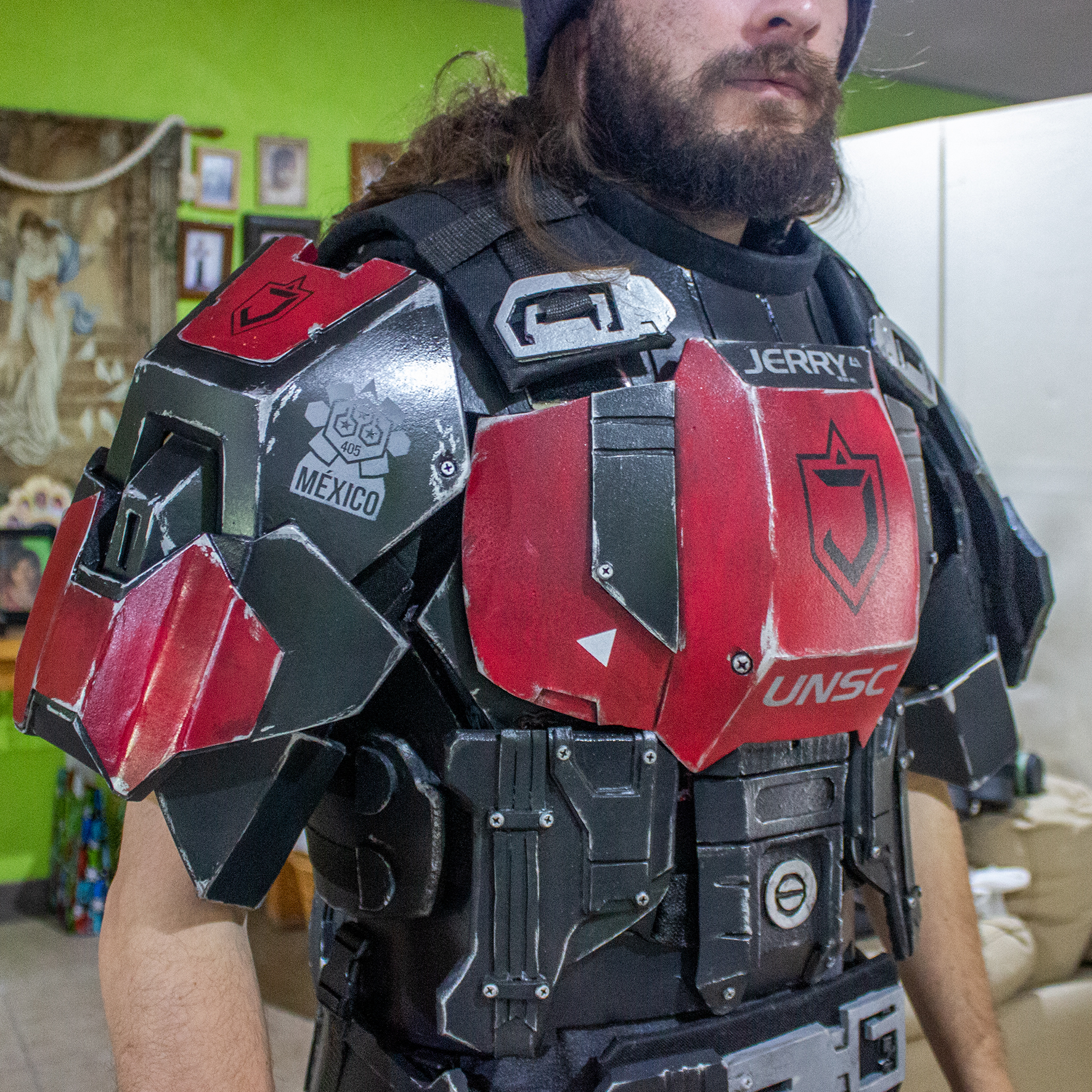 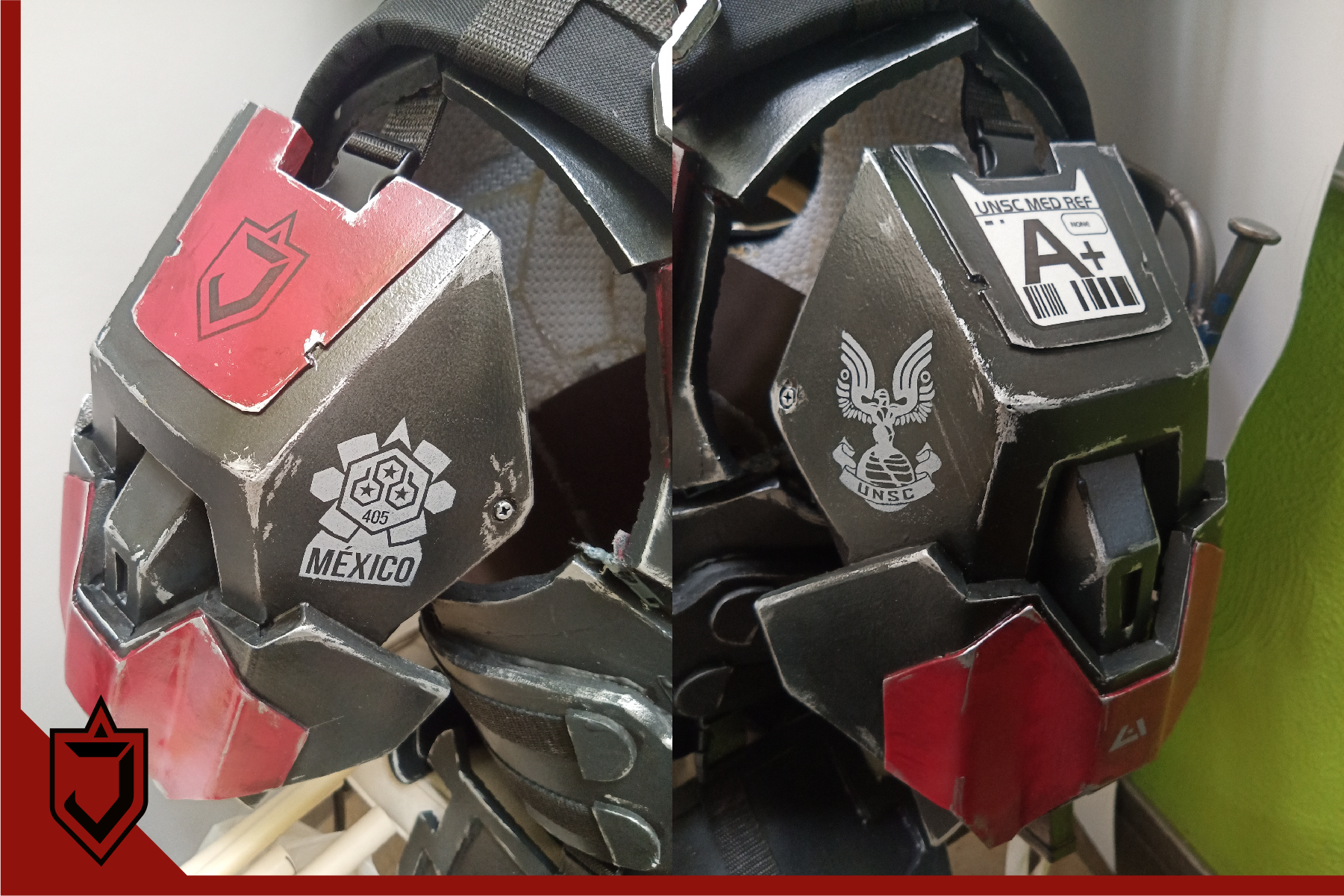 The process was really simple: foam build, sealed with heath and Mod Podge, base paint and vinyl stencils for the logos.

One thing I've wanted to try was the blood label printed on reflective vinyl, and it worked great! I loved the result (also printed the small ones for my helmet).

For the base I used eva foam and covered it with canvas fabric, for a more "undersuit" look.

And that's all. I'm starting the forearms this week.

This was literally a 1 hour build, but, it has to be here: 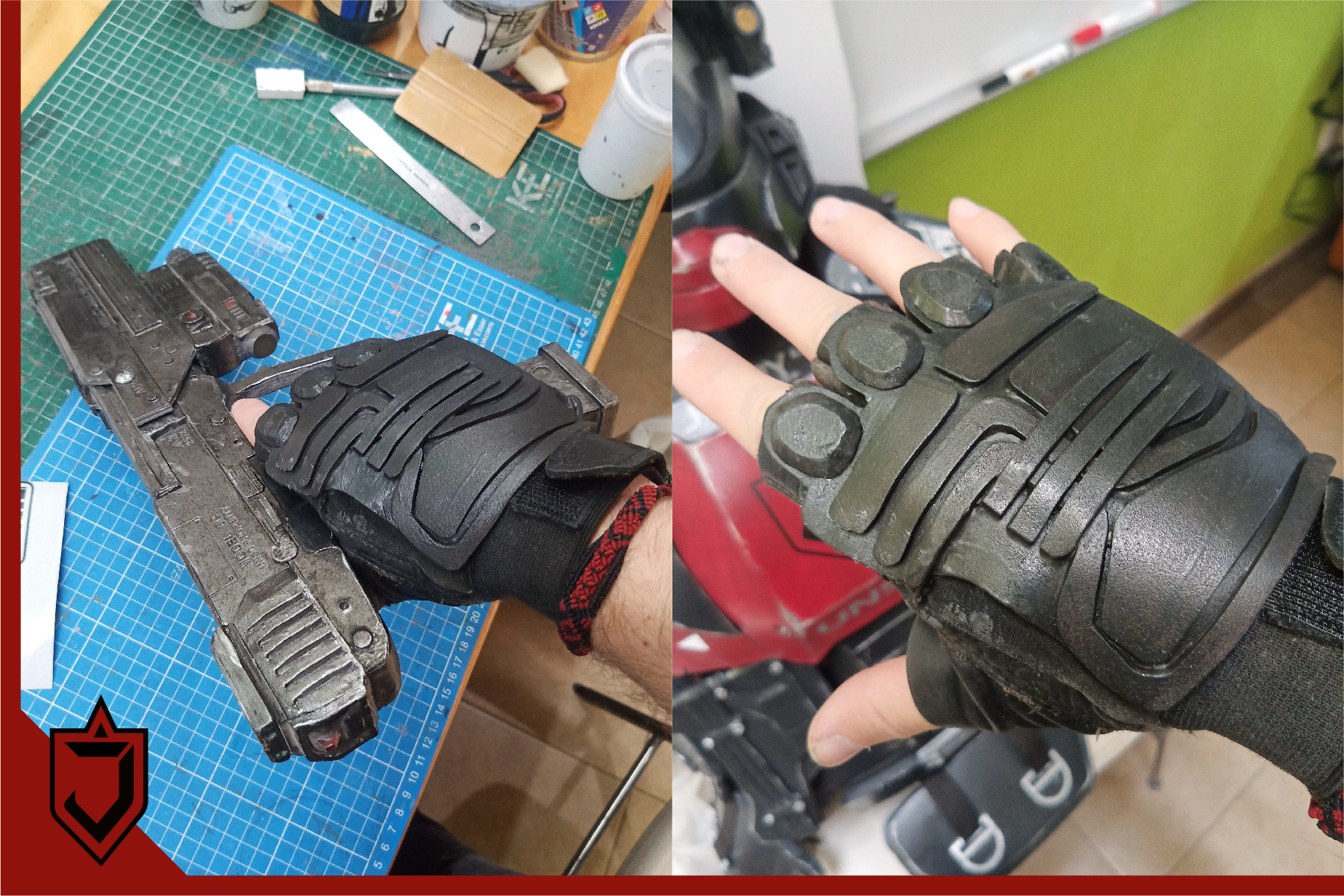 I used an old pair of leather gloves, and just covered with 2mm eva foam: 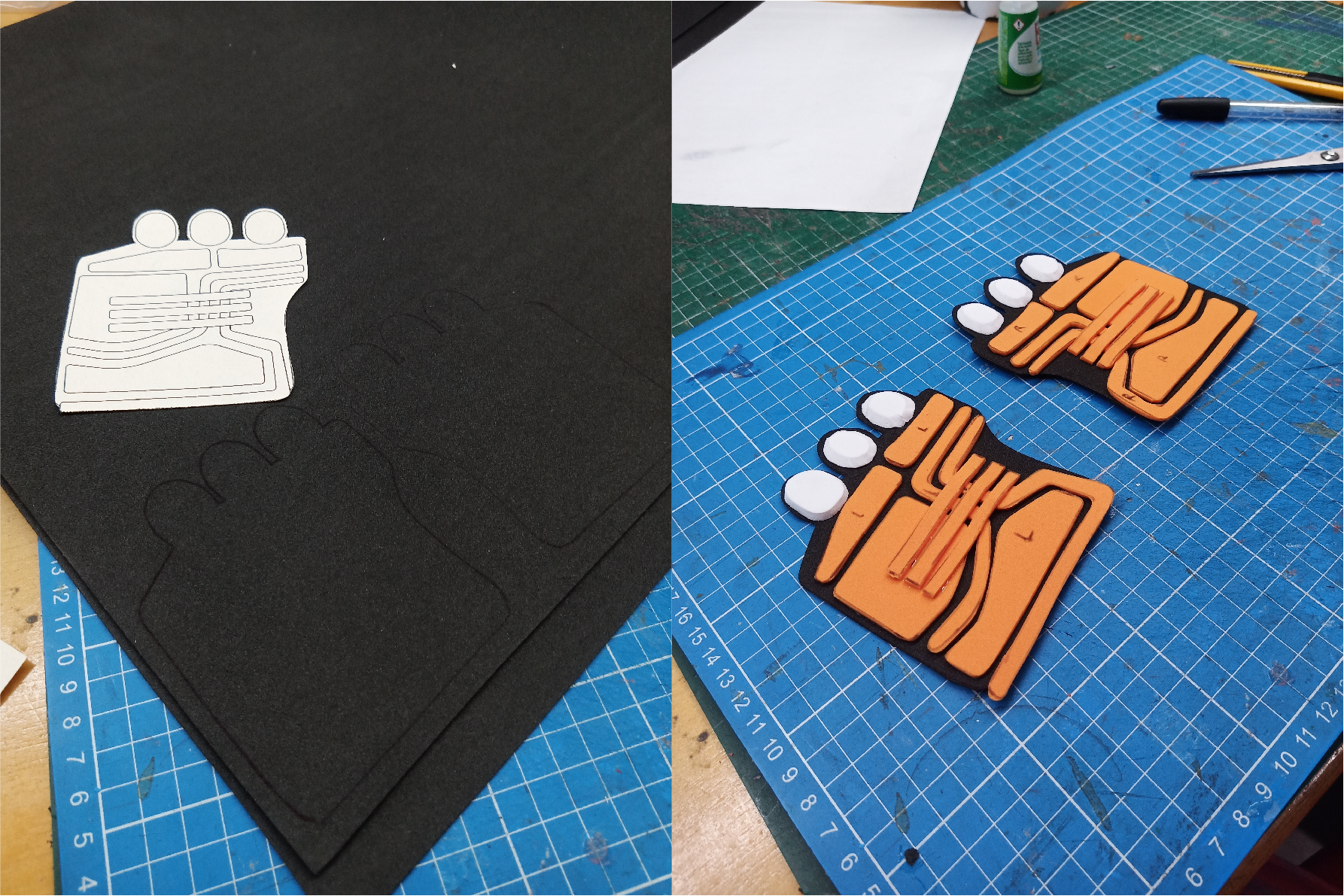 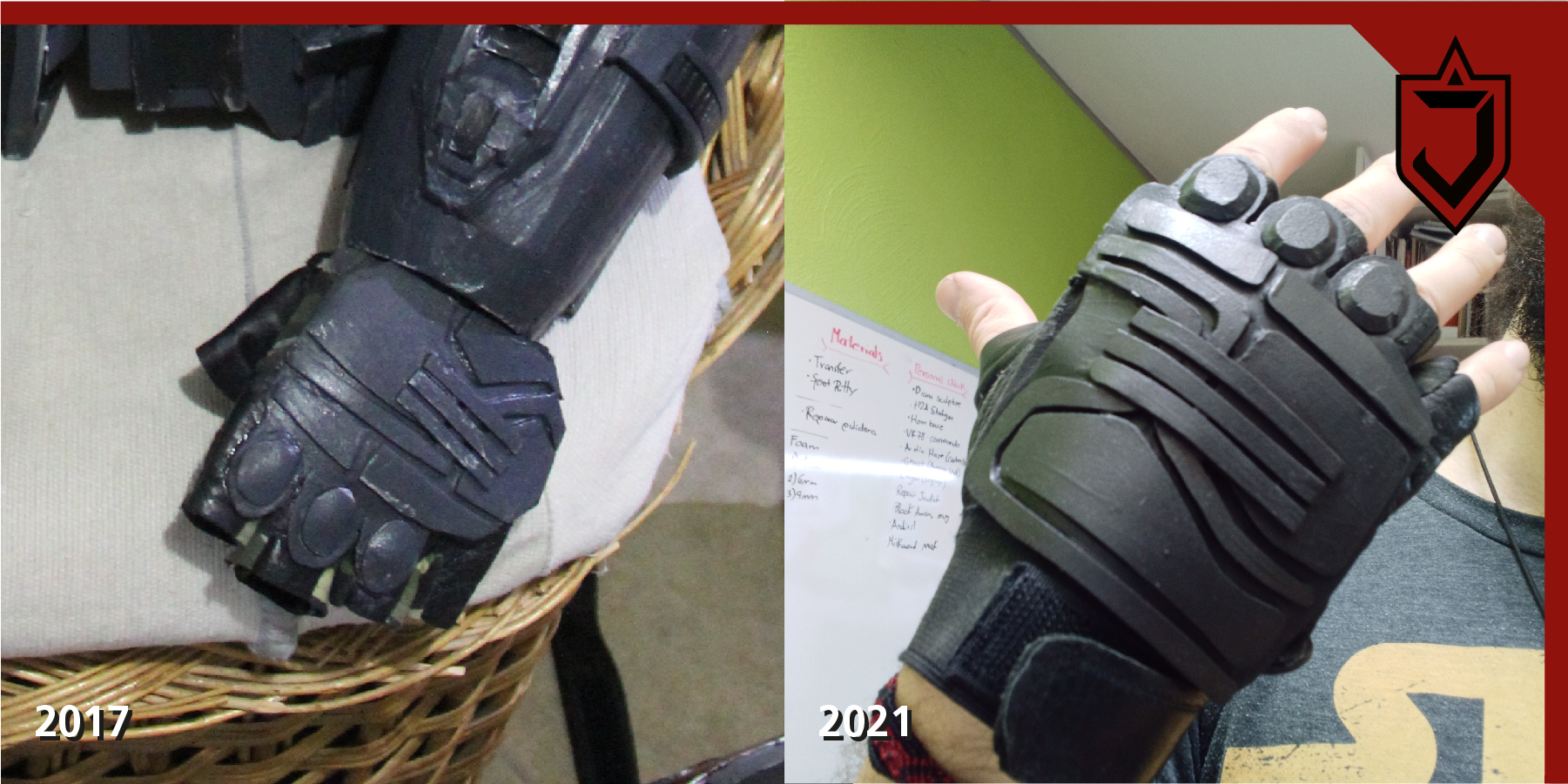 You are just flying through this build now!

Rock Lobbster said:
You are just flying through this build now!
Click to expand...

Rock Lobbster said:
You are just flying through this build now!
Click to expand...

After a long week, I managed to finish the new torso piece. I used for the base, my old torso, which I just repainted, and replaced some parts (specifically: Chest plate, Belt, Codpiece, Neck and Buckles/D-rings). Also, added a few screws to have a more accurate look.

Here is a before-after comparison:

To have a better look: the shoulders, neck and belt base are eva foam pieces covered in canvas fabric.

One of the issues I had with my v5 armor, was the buckles and D-rings: they weren't accurate enough, so, following the Official Rookie guide, I made some templates, laser cutted and molded them, to have an exact copy of the original pieces.

Also, the knive and sheath were upgraded: just a little sanding, repainting, and it was done.

To attach the knive in the fanny pack, I only used 2 strips with velcro, so I can remove it.

And that's all for now! I don't know what will be the next piece to be done, maybe the shoulders or the helmet.

loving the before and after shots, that is pretty cool to see the differences! Nice Job!

I've finished my new helmet, which is made out of pepakura, fiberglass and bondo, with some eva foam details. The Halo: Reach attachments are entirely eva foam, different thickness.

Maybe you're wondering, why put the Halo: Reach attachments into a Halo 3 ODST?, well, the answer is just because I wanted I love the way that an ODST helmet looks with those attachments, and is my custom build, so, why not?

Here are more pictures of the finished helmet, with a comparisson with the helmet I've made in 2017:

One interesting thing I've made, are the respirators. I used micro-perforated vinyl to make that "net" effect.

And that's all! (for now). The next thing I'll be building are the shoulders.

The before and after of the helmet looks amazing, so much detail on the new one!

TecnicoNinja said:
loving the before and after shots, that is pretty cool to see the differences! Nice Job!
Click to expand...

Thanks! When I'm done, I'll post a comparison between all the odst versions I've made

#FoamGoals. Nice work, that is some incredible detail. I was drooling over the awesome logos and how it all came together. *Furiously takes notes over here*

With the forearms done, the half of my ODST v6 build is done! 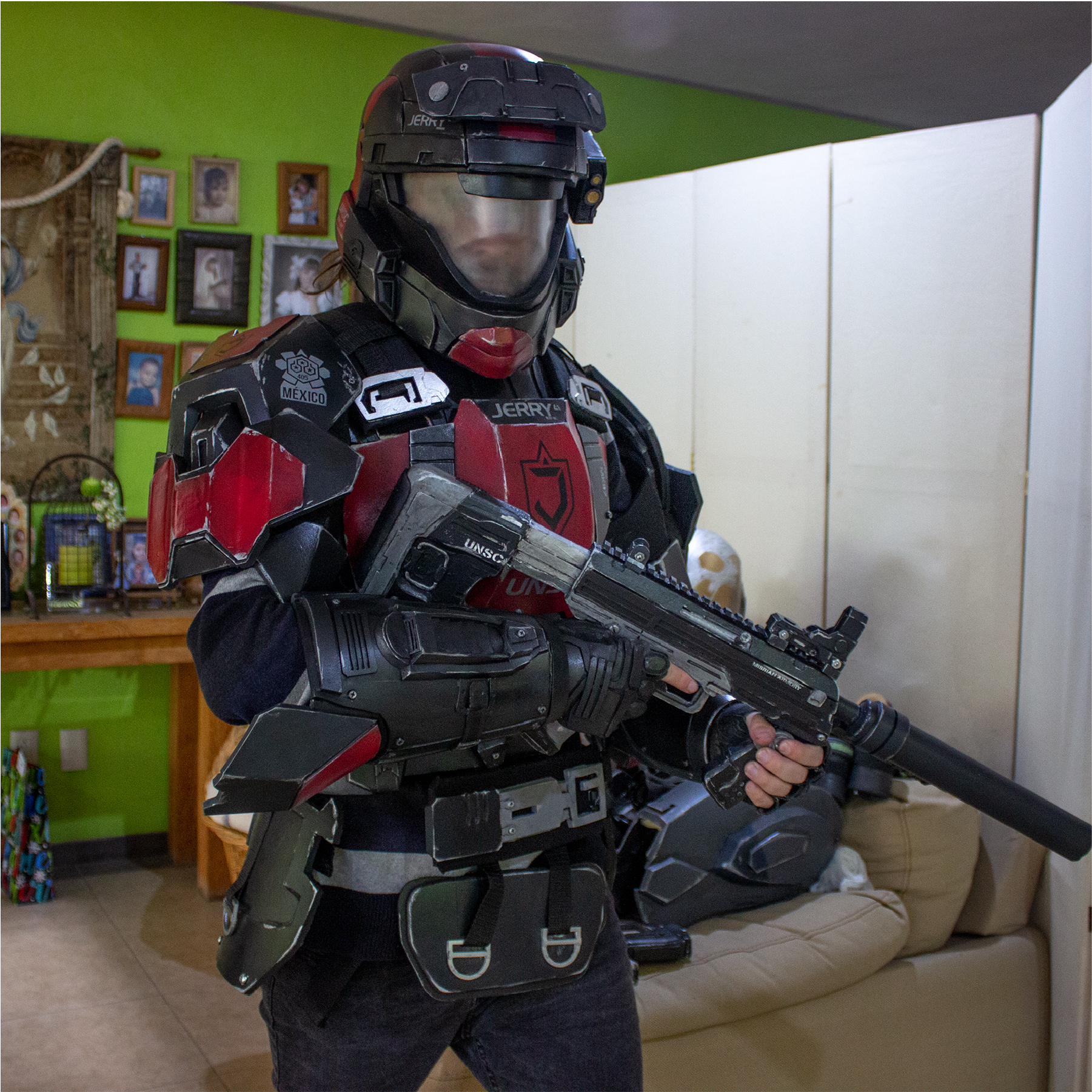 The process was the same, eva foam, sealed with Mod Podge, and painted with an airbrush and acrylics.

One tricky part, was the logos and that stencil type on the side. I had to "recreate" the logo from the Rookie guide. And for the text (which was unreadable on the guide) I just put "UNSC, my initial "J" and the number I use in everything since I was a teenager: "224".

And last but not least, a comparison with my previous version: 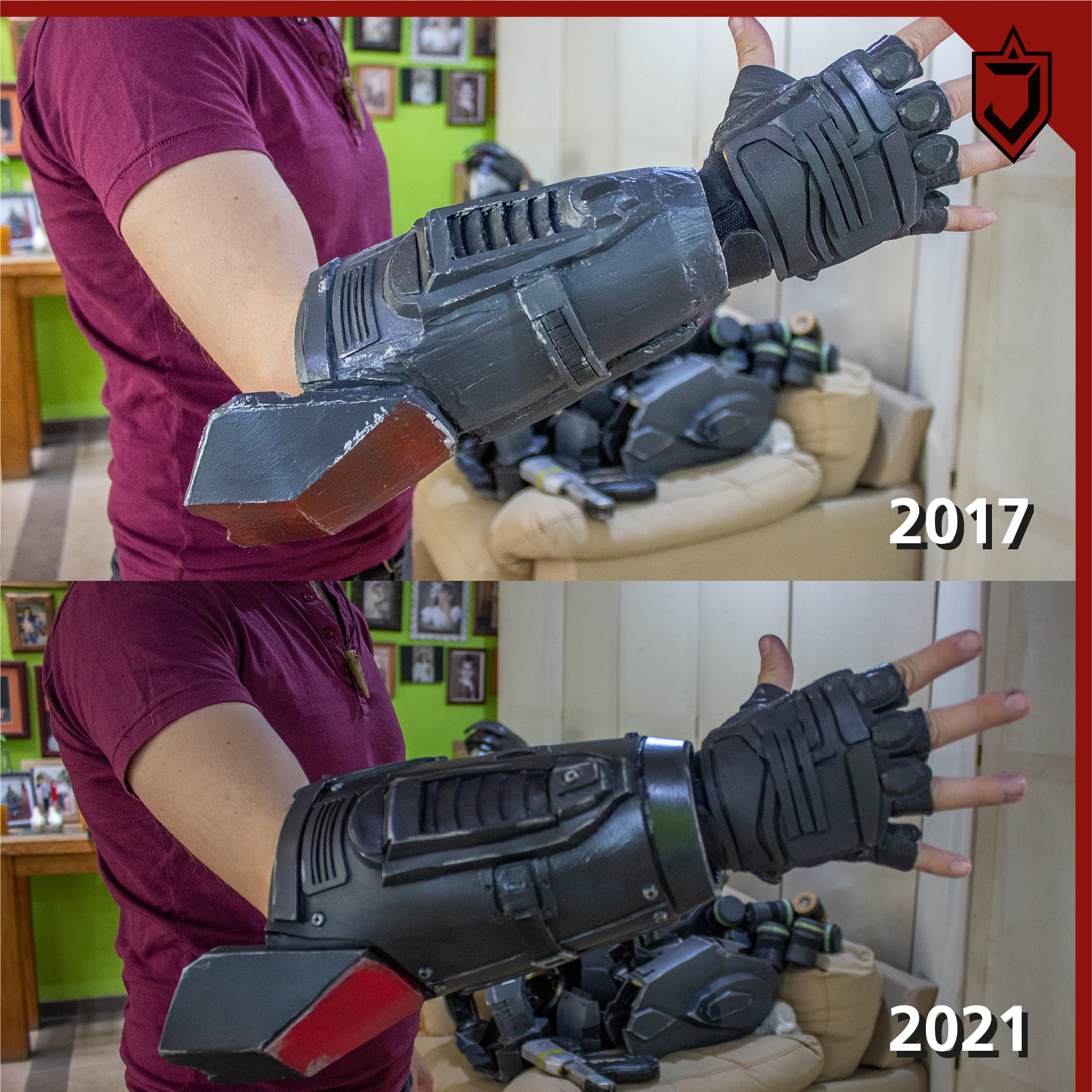 My ODST v6 is almost finished! Only shins and boots to go (and the new weapon).

The thighs were a really simple build (done it in 1 day, while I was waiting the backpack sealer to dry lol). 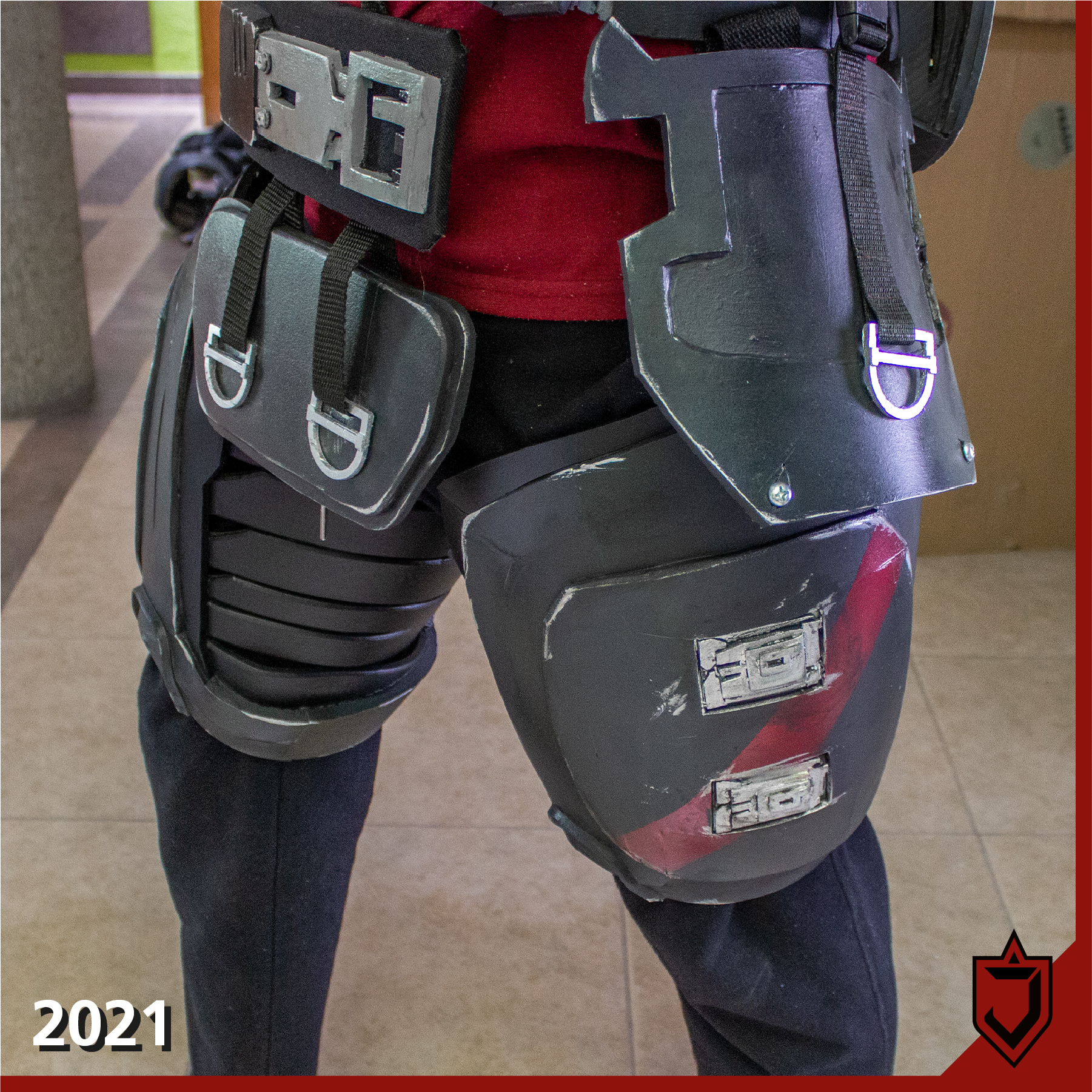 I really loved the new result! And there are so much more comfortable to wear! (my previous ones were fiberglass) 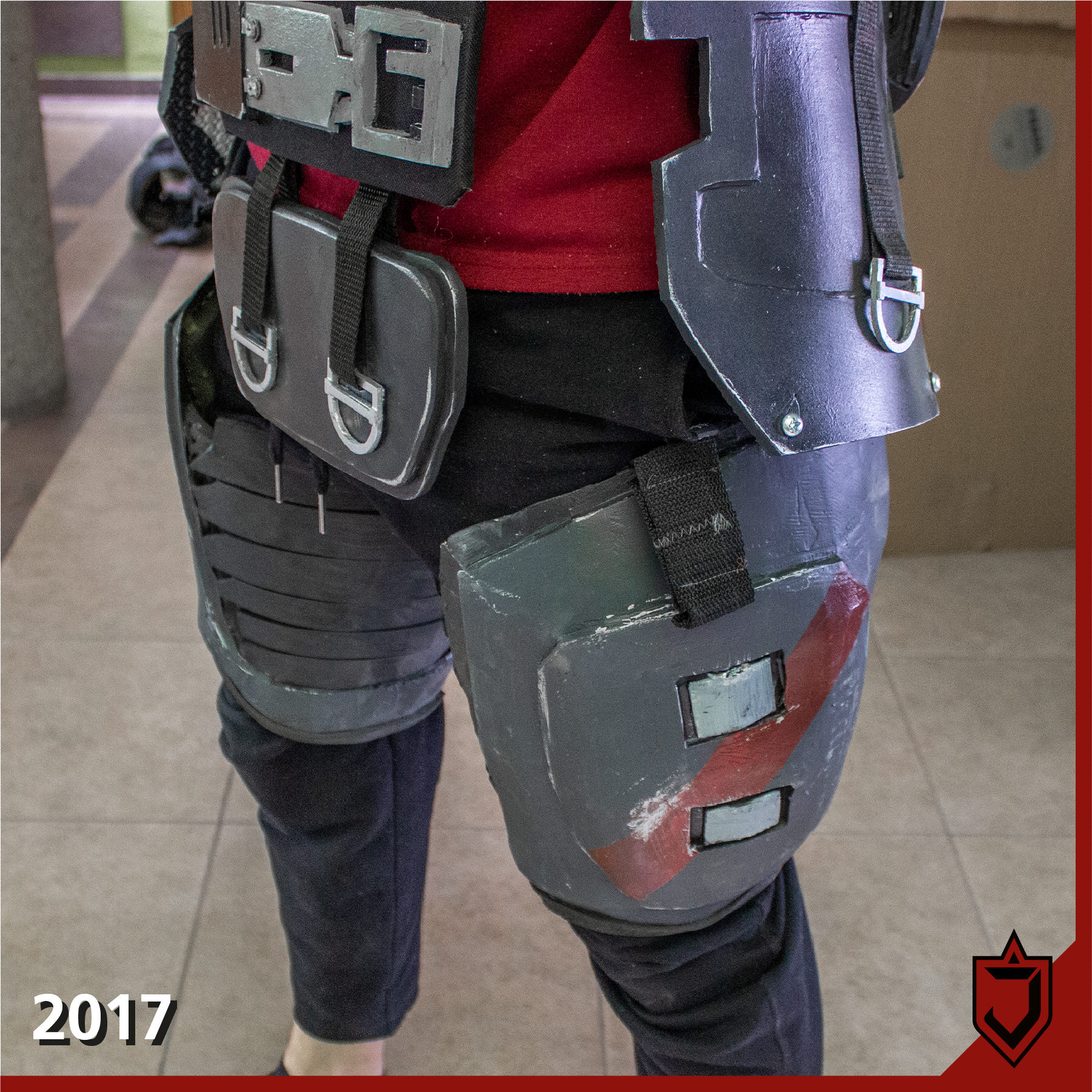 Process pics: (not many) 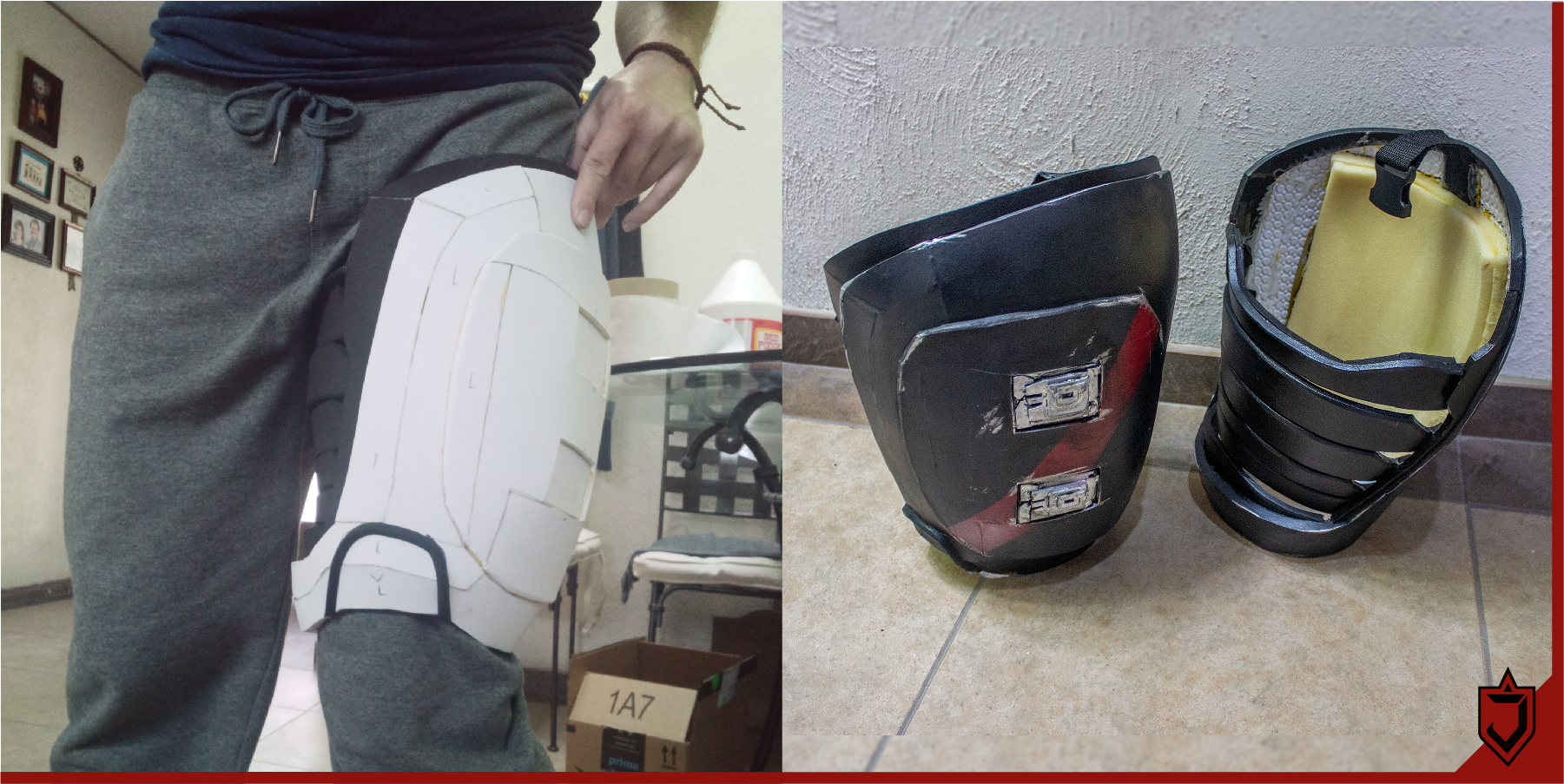 I put some sponge inside for more comfort.

The backpack was quite a bussy build, but is now done! 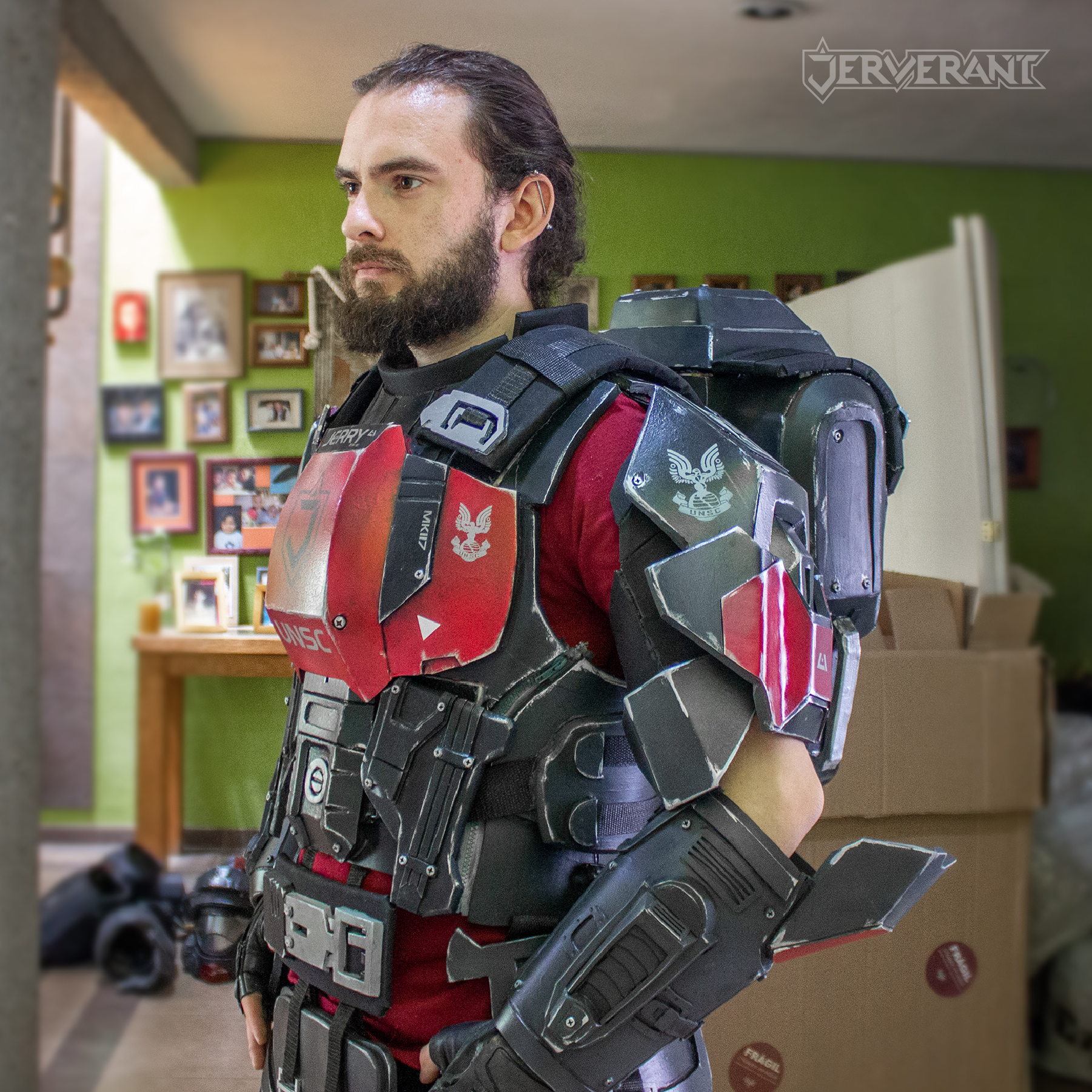 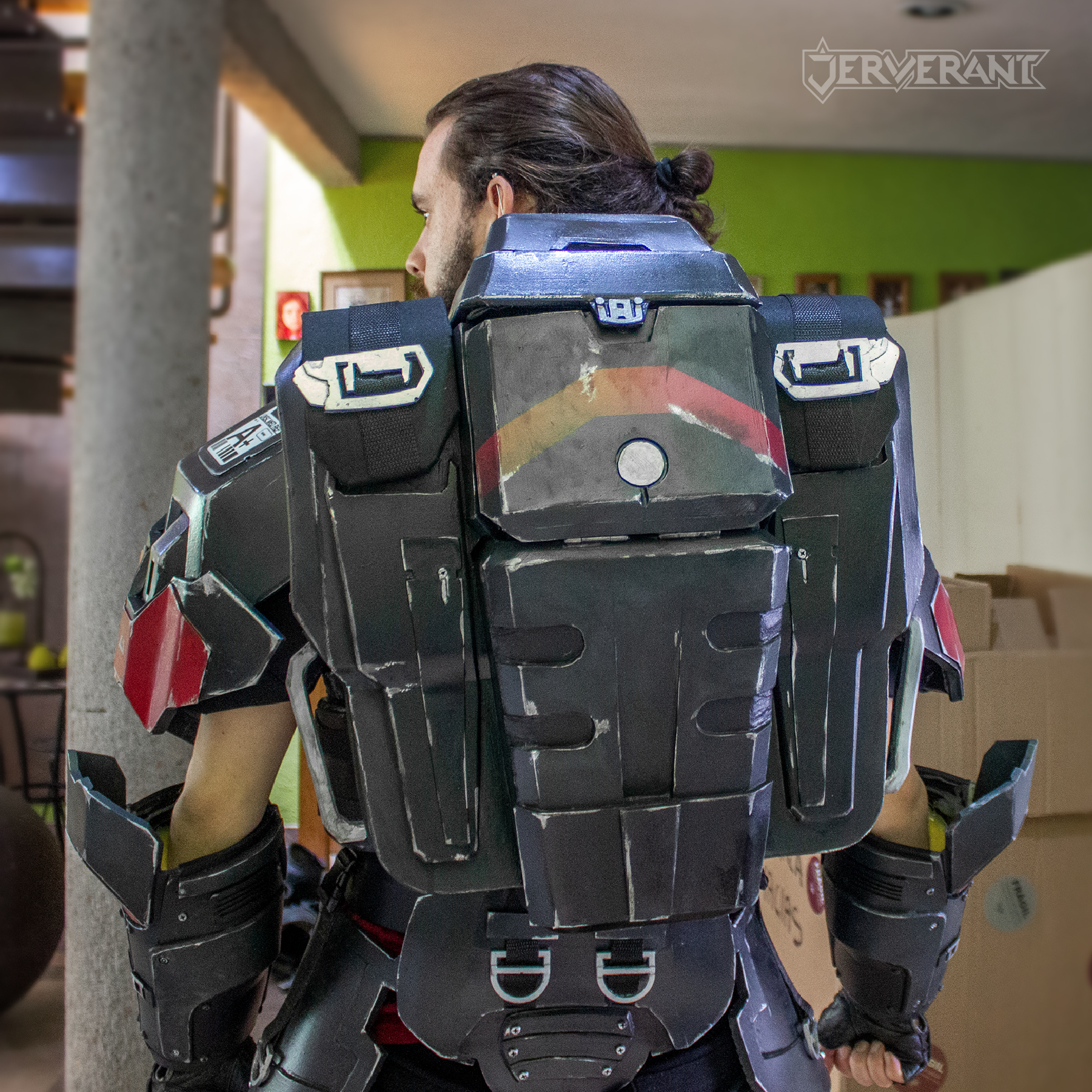 Started by unfolding a game asset file of the backpack, and building it in eva foam.

The pads were made using the same technique I used for my shoulder pads: eva foam, covered in canvas fabric, then added some straps and buckle resin casts:

Sometimes at cons, I often buy something, or have to carry a bottle of water, and in armor is hard, but not anymore!, because I made the backack useful:

Used some hinges to make the backpack "doors" open and close, and put a magnet to keep them closed. Also, upholstered the inner with more canvas fabric.

And finally, the comparisson with my 2017 backpack (made entirely of cardboard and masking tape lol) 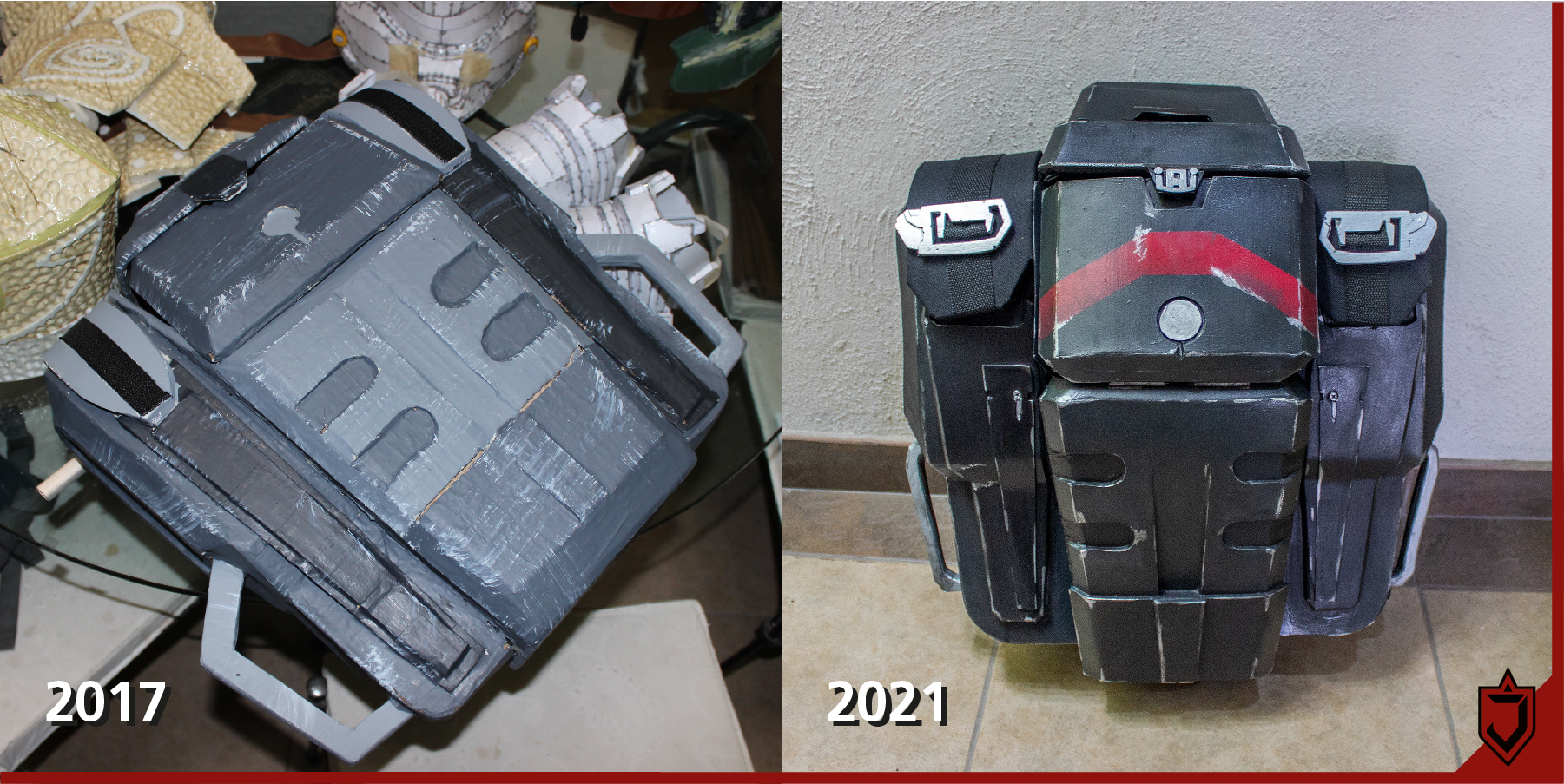 Southern Regiment
This work is seriously impressive. Every update you post, I am blown away by how good it looks. One day I hope my armor looks this good. That ruck sack is awesome, my man! Excellent work!

With the boots done, the armor is complete!! 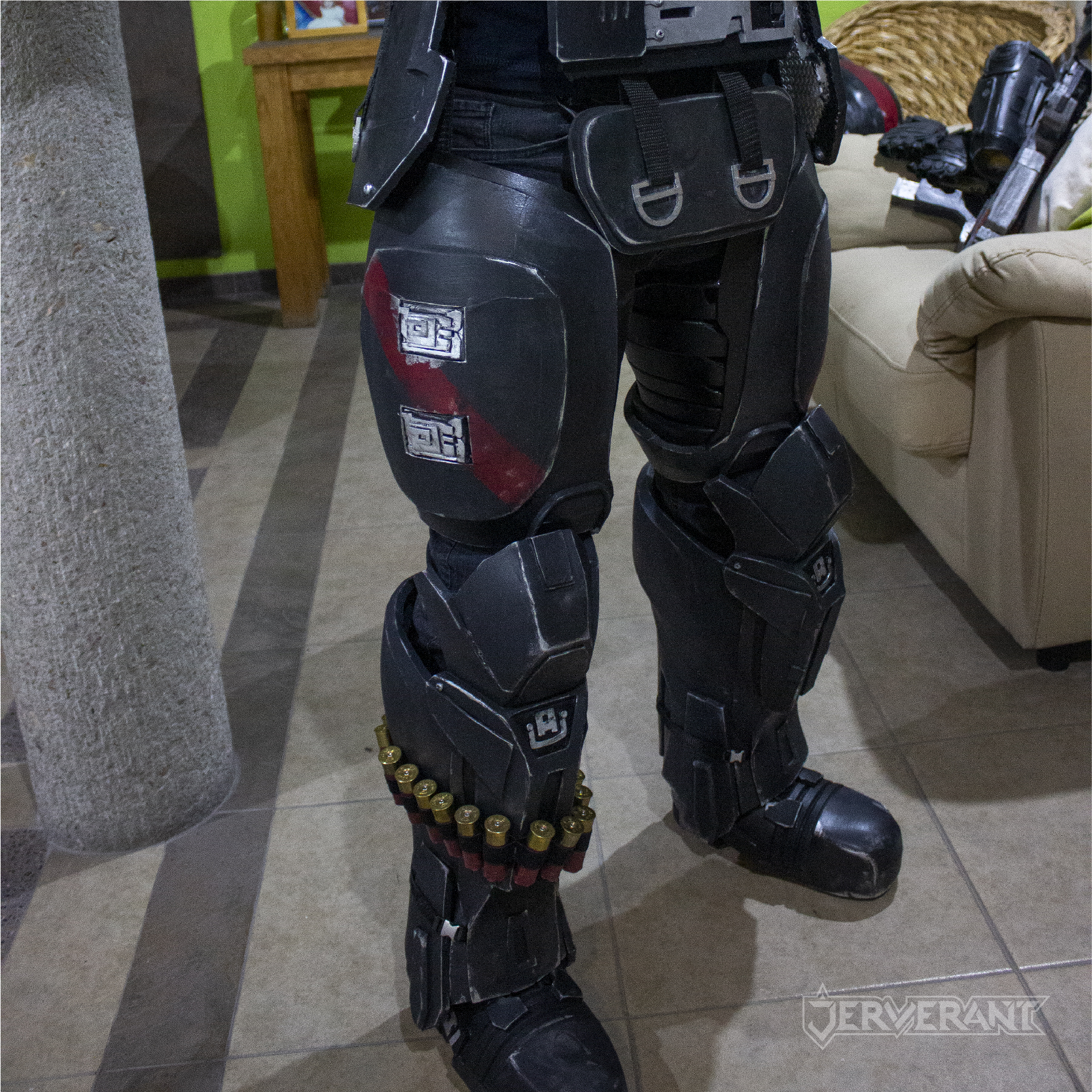 Because I'm making a Halo 3 shotgun, I've decided to add the shotgun-shell belt on the leg, the shells are real (but used) shells, which I just closed to make them look "new".

The process were quite simple: 2mm and 9mm eva foam, sealed with mod podge and painted with my airbrush.

For the comparison, this piece is special: my previous shins were the oldest part in my ODST (I think I have them since my ODST v3, which was build in 2016), and so, the upgrade is really huge. 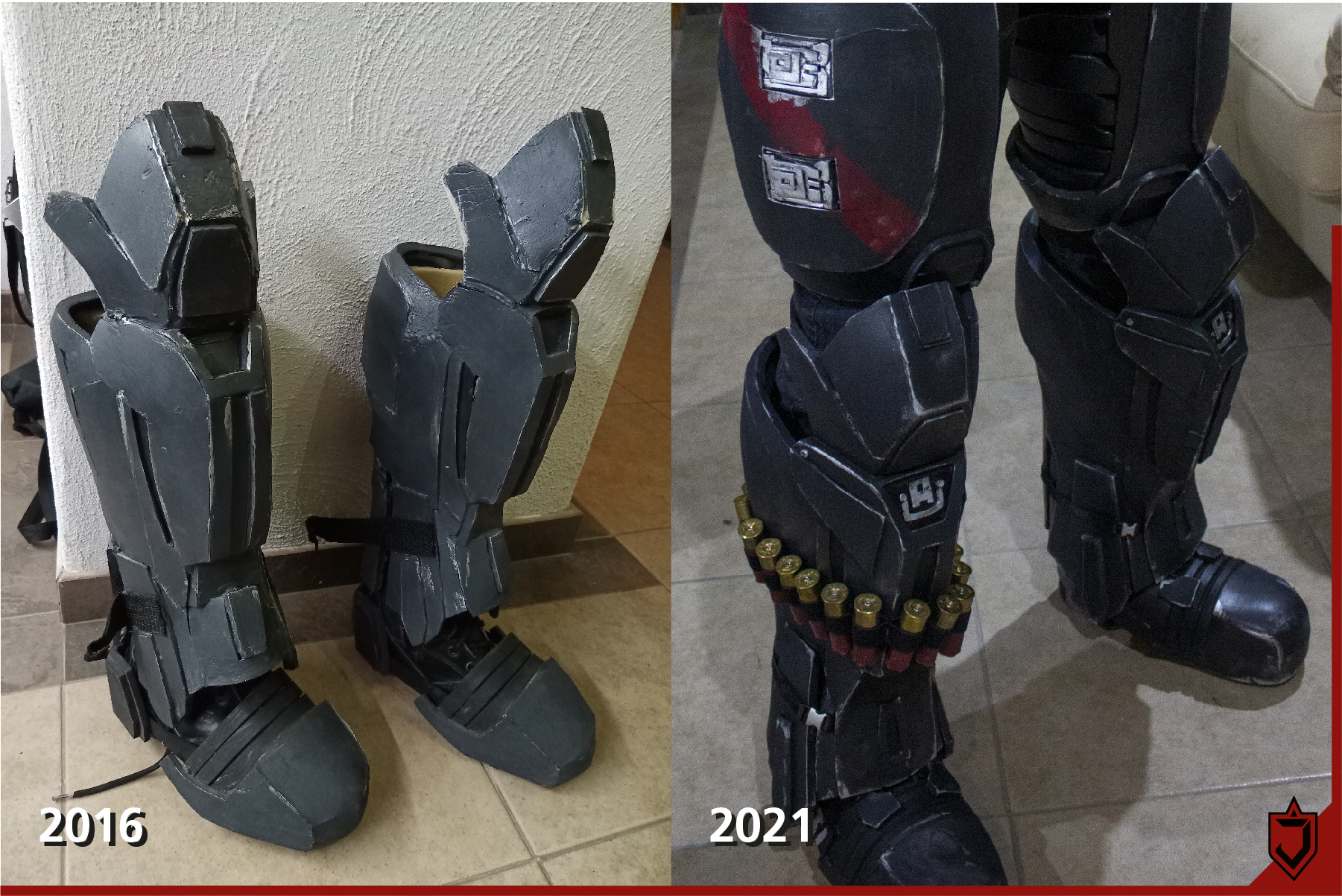 Well, with the armor done, the next thing to do is finish the shotgun, and having a proper photoshoot!

If you were following my build since the begining, you´re special :3 Thanks for reading!

Here are some shoots I took at home: 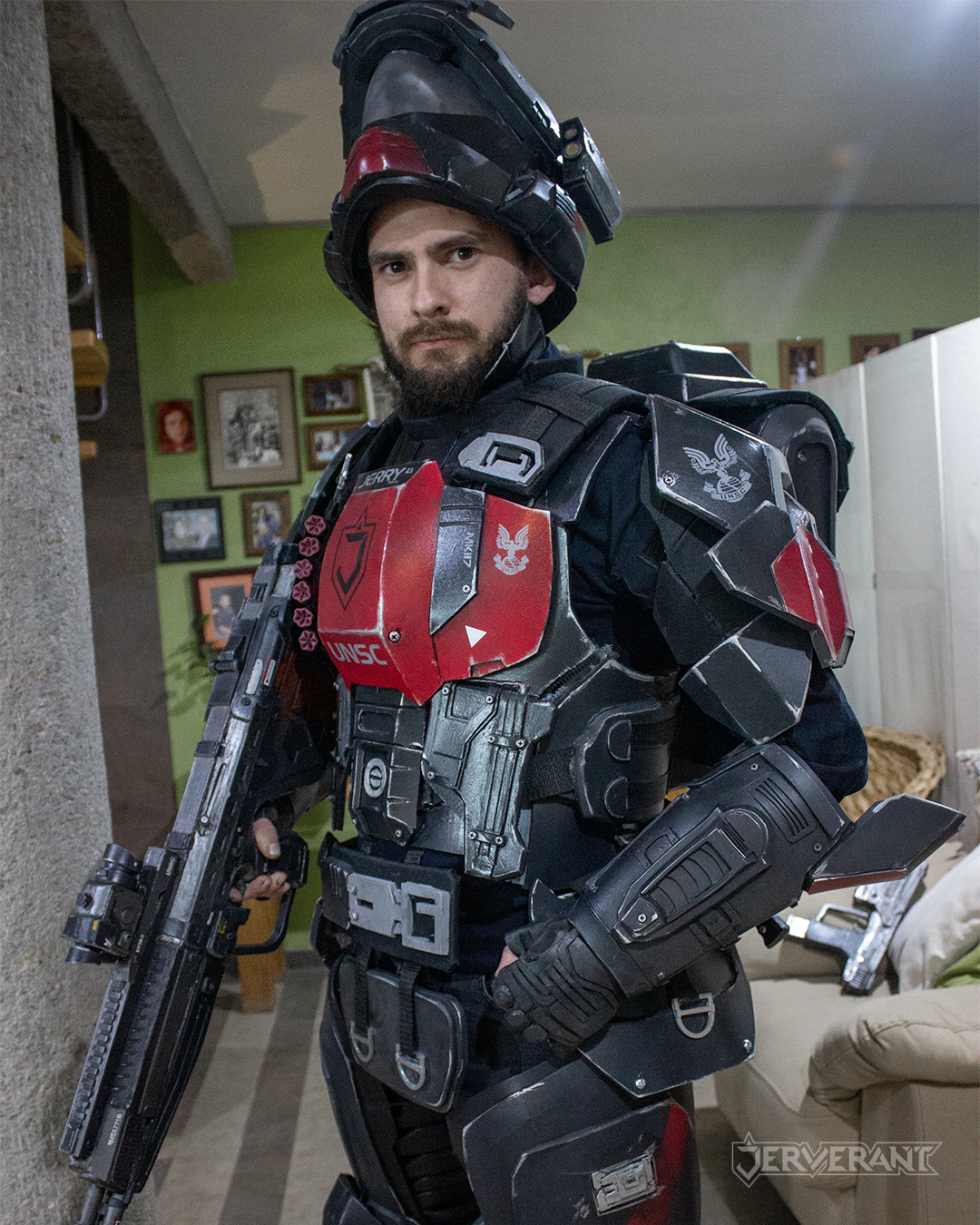 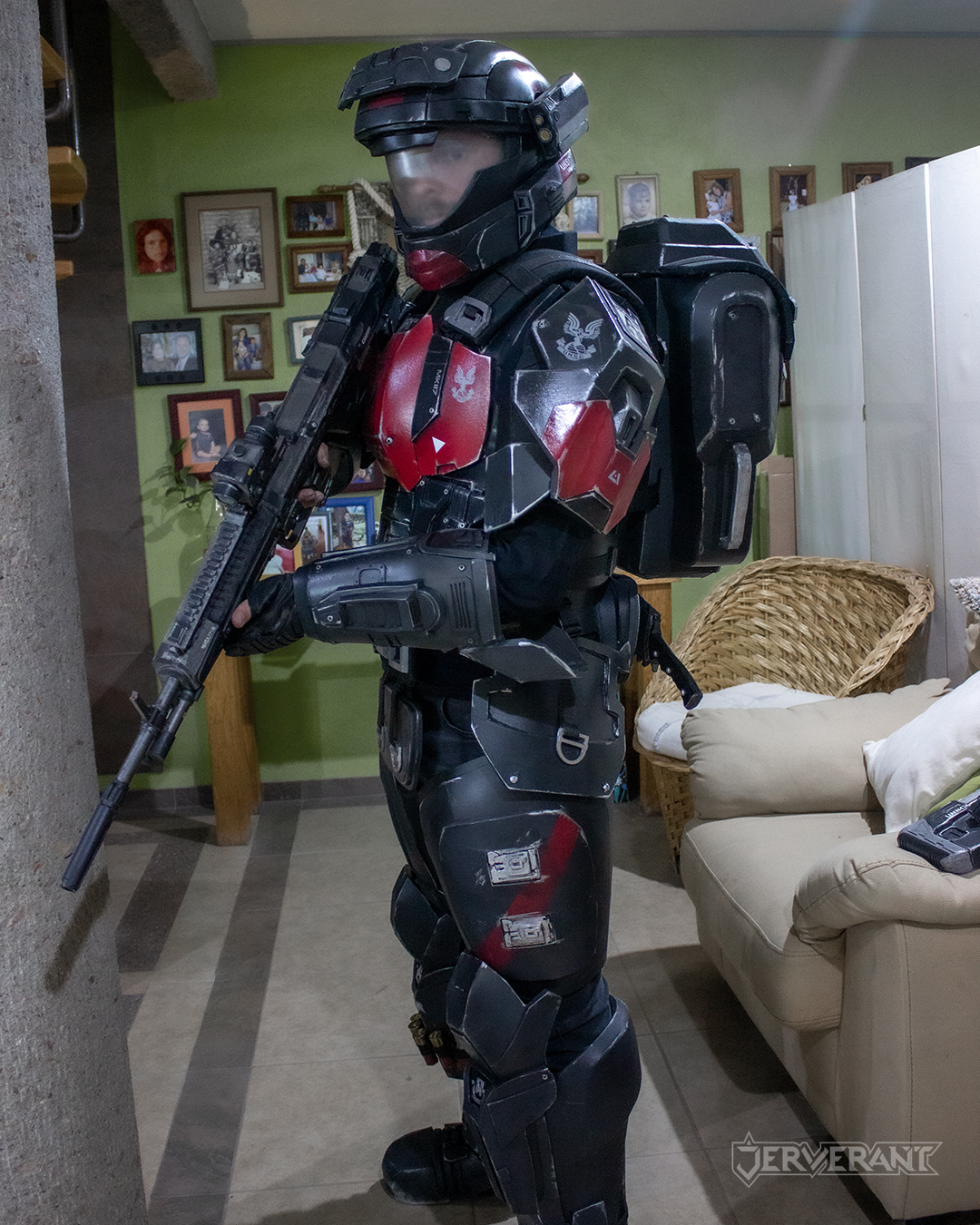 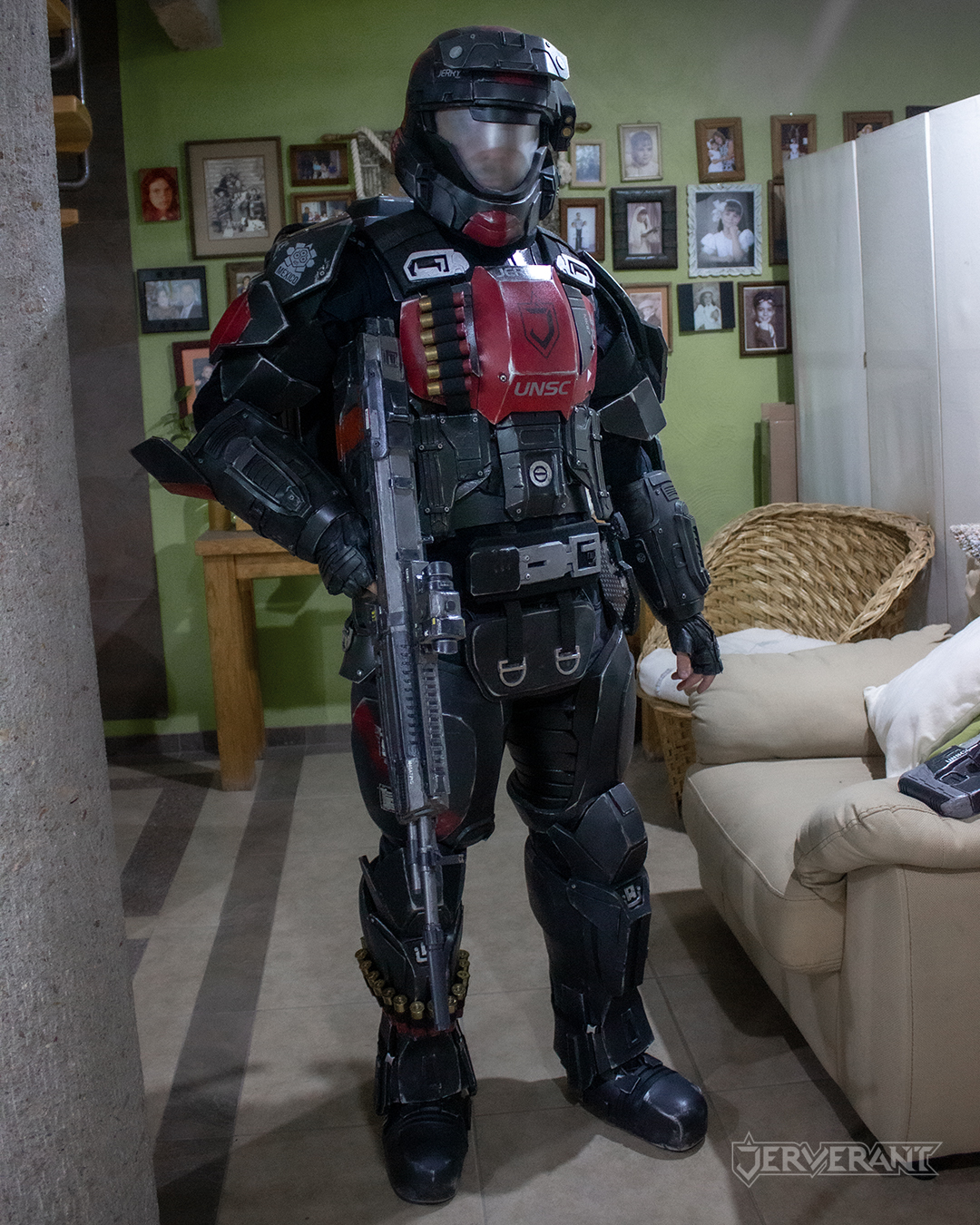 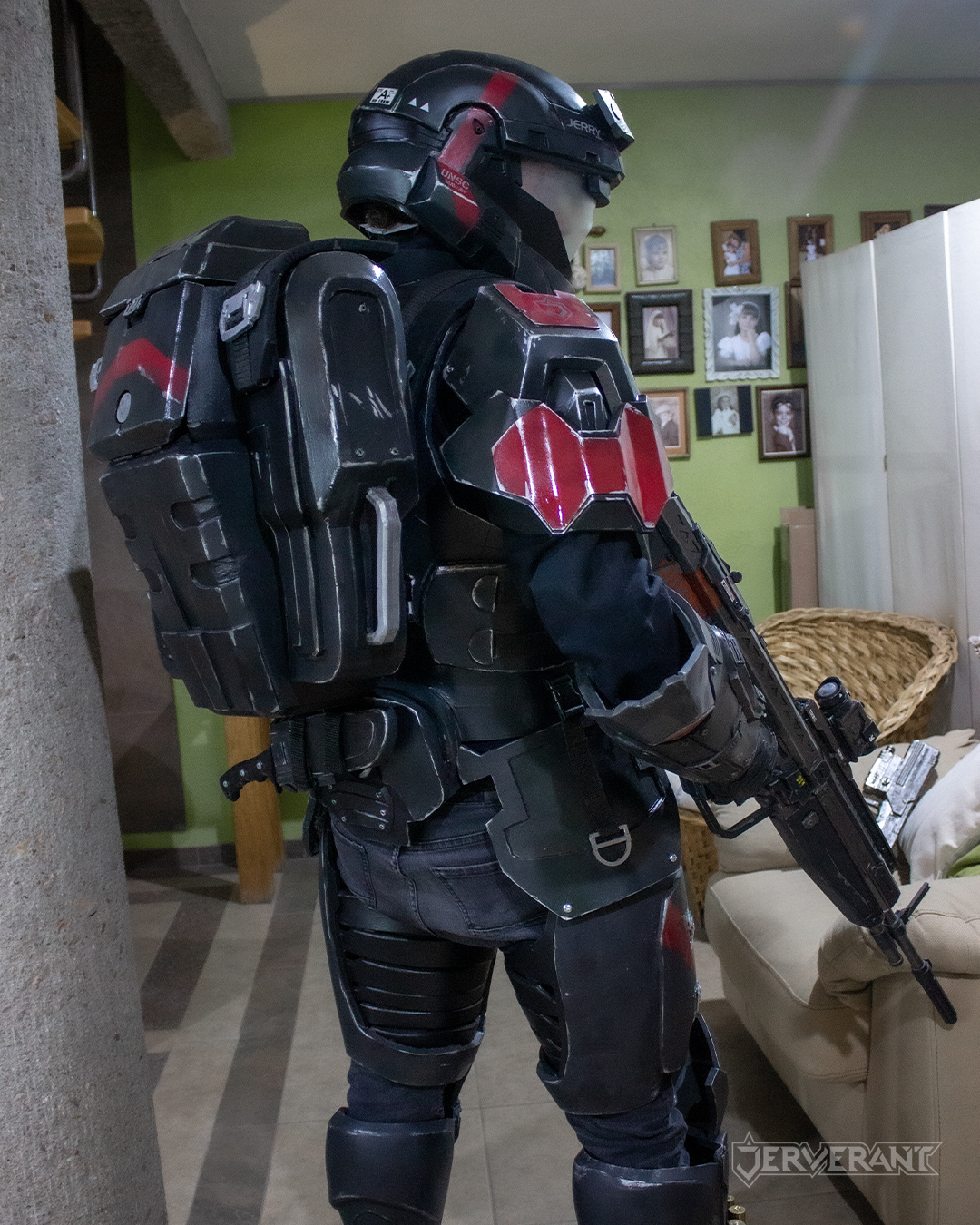 Enjoy!
If you were following my build since the begining, you´re special :3 Thanks for reading!

And for the record of how many years I've been working on ODST armors, here is a comparison and a small description on each of the ODST versions I've been worked on: 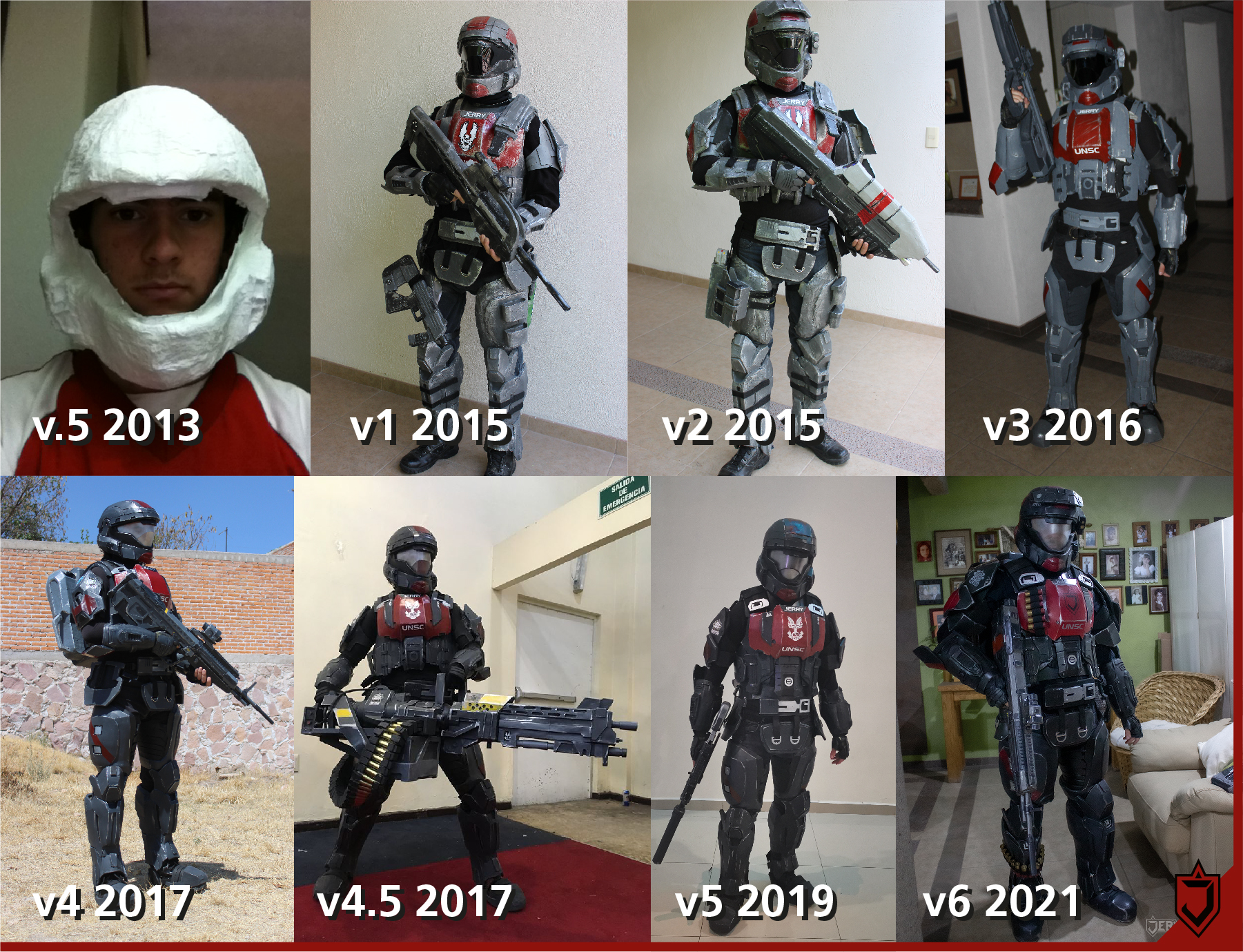 v.5 (2013): I was 17 years old, and this was my first contact with pepakura. I didn't knew how to use some materials besides white glue, paper and cardboard. I never finished this armor.

v1 (august 2015): I did my research, and found out how to work with fiberglass, and so, finished my first armor. I was so bad at it at that time but everyone starts somewhere, so I got adicted to make armors and I've never stoped lol.

v2 (december 2015): This is basically the v1, but I added tons of new details: the Romero shoulder, the Halo: Reach helmet attachments, glove pads, pouches and a magnum holster, (also, made 2 new weapons: a magnum and an AR).

v3 (2016): This is where ODCA told me about eva foam, and I started to use it on everything. I remade entirely the armor, with some pieces out of foam (shins, boots, torso, belt) and some others out of pepakura and fiberglass (helmet, shoulders, forearms, thighs and the chest plate).

v4 (june 2017): This is basically the v3 with a few improvements: Did a repaint job for a darker grey; made the backpack and built a DMR.

v4.5 (november 2017): This was a crazy (but awesome) idea I had: I looked at the Gatling Gun Majini while playing Resident Evil 5 and I was like "OMG that's super badass, we should have something like that on Halo", and I just took Jorge's machine gun, and added a bullet belt between the machine gun and the backpack. Honestly, I loved the result and I want to make it again but with the new armor, unfortunately, that machine gun wasn't my best build, so, it died.

v5 (2019): This is basically the v4 (lol) but with an entire new paint job and a new torso piece. Took some references for the vest from Lost Viking Props, and also, made my SMG m7 from Halo 2 Anniversary (multiplayer version).

Thanks to all of you who had been reading my thread since the begining, as well to all the ones who suported me and gave me advices. Thanks a lot!!!!

Yesterday at 9:00 PM
The Tiny Geek

Yesterday at 9:00 PM
The Tiny Geek