yesterday turned my 360 on, and it wouldn't show up on my monitor (I use the Pelican Air-Flo Cooler as an adapter, which may have something to do with the problem) i tried every output the Air-Flo has (except HD cause i'm too poor to have an HDTV) AND IT WOULD NOT WORK!!!
i tried taking the adapter off and using the cable that came with the 360, but that would not work either
no matter what output i use, the video will not work, but the sound will
i'd appreciate any advice anyone can give me. I've been really stressed lately and I really need to let off some steam in halo3
thank you, come again
G

It's probably the video connector on your T.V. (the yellow one), you should try to hook it up to a different T.V. and see if you still have the problem. If you don't then its the T.V. if you still just have sound then I don't know... Hope that helps.

Try disconnecting all the cables then re-connect them all. IF that doesent work, let it cool down move it on to a flat surface (not carpet)and play with the 360 upright to stop it from overheating. If neither of these work... I Guess it might need microsoft surgery.
C

it's not working on any displays on any output settings (VGA, S-Video, A/V) i think it's probably an internal problem (likely caused by the Air-Flo Cooler adapter crap) and i would really rather not have to send it in to microsoft and have to wait a month for it's return, i'll try to see if i can bring it to best buy or somewhere so they can look at it
M

If it does require service, whatever you say to customer service DO NOT mention the cooler. Since it's not a licenced product your warranty is technically voided.
N

Most people use the cooler to little effect.

I noticed you just said that it didn't work on any of the outputs into your TV; perhaps try a different tv? Maybe yours is just busted up.

If not, you can ship it to Microsoft or take it apart yourself. I don't recommend the latter.
C

i did. i tried my monitor, my tv, and the tv in the living room and theyre all the same, sound works, no video
G

Just send it in. Mine broke on Columbus Day, was repaired on the 26th, and was being tested on until last monday. I expect it back monday or tuesday. It has driven me insane, especially since i went live only the day before. Oh, and by the way, if you take it apart yourself, the warrenty is void. Micorsoft will not repaire it if you disassembe it.
N

Which is why I said not to do it.
A

If you have the new falcon chipset....prepare for the clod (christmas lights of death)

I had the same problem...then fixed it and while it was loading it went blank. Then it had RRoD and im having to send it off. I got the stupid box on the day my school let out for thanksgiving, Oh well i can work on my armor
2

This is the cooler I got for my system, and it's worked great for a year and a half now. 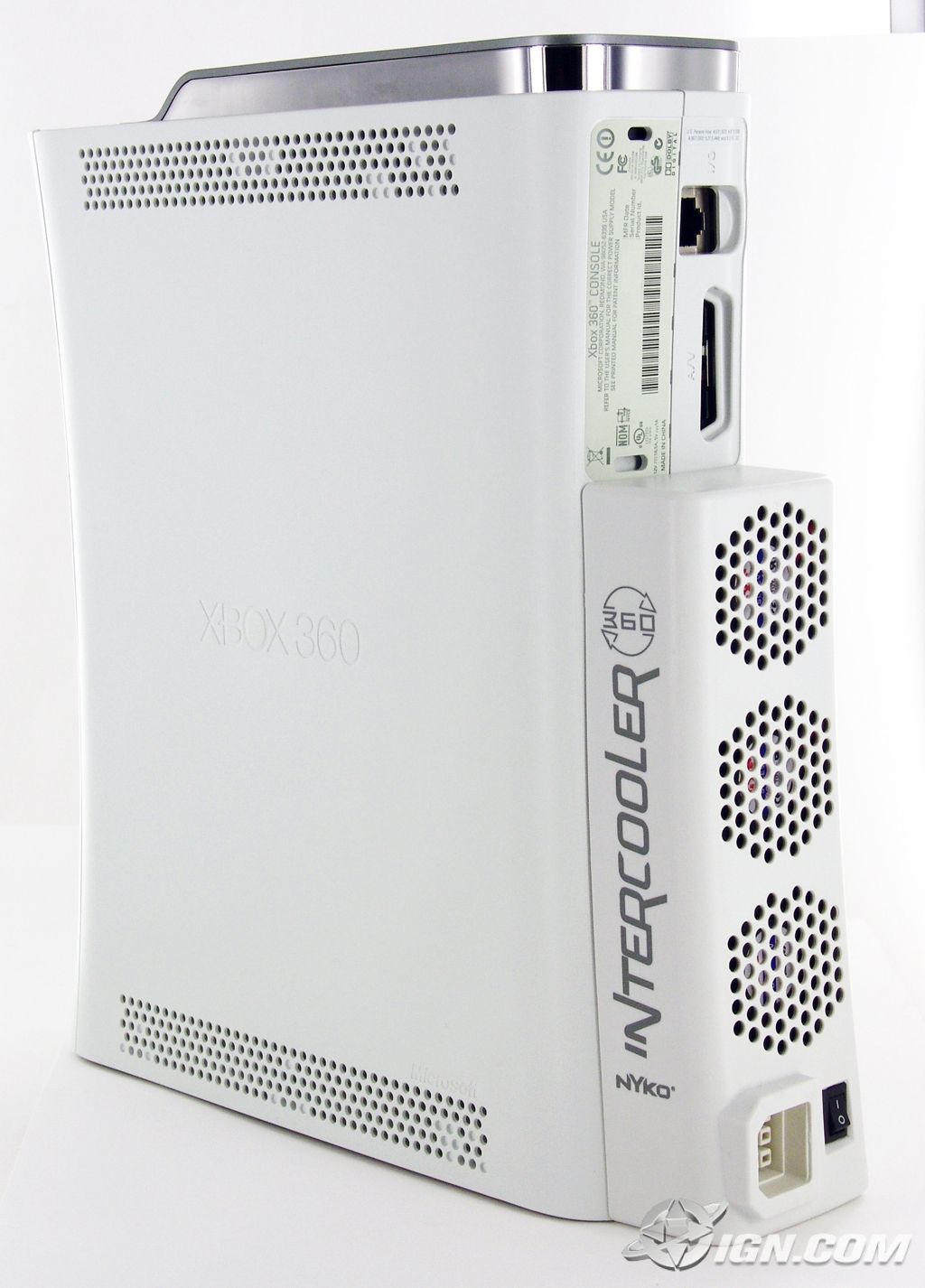 I wouldn't trusted something like that Air-Flo thing had I seen it first.
N

I'll still play my regular Xbox too. I'm too attached to it to let it go.

actually most of the time they have been proven to cause more damage to your 360 because it uses more power or something like that, i never used mine and mine wa sa release model and lasted up till 2 weeks before release of halo 3 and i had no cooler or anything.
G

My friend bought one of those and it killed his 360 too.

2 of my friends used that fan and had their 360's die on them, this was reported online also where the fan overheated itself and blew hot air in which didnt help keeping the system cool, just hotter.

AoBfrost said:
2 of my friends used that fan and had their 360's die on them, this was reported online also where the fan overheated itself and blew hot air in which didnt help keeping the system cool, just hotter.

Sorry that your friends' systems died, but like I said MINE has had it on there for a year and a half now, no problems. I originally went out and bought it when playing Madden 06 and it kept freezing up on me cause the system was overheating. Once I attached the fan, problem went away and have never been seen again.
Perhaps, I just got lucky or maybe I know how to take care of my stuff.
Also, my system does not sit on it's side, it lays flat, more surface area can vent the heat that way. Remember, heat rises.

Edit - After reading the article Frost posted, I detached the fan from the back of my system. Guess what I found...nothing. No scorch marks, just a tiny bit of dust.
This leads me to believe that the people who end up sending their units in due to this fan didn't know how to store their systems properly.

Tips - Never store you system on any carpeted area. / Keep you system out of enclosed spaces. / Finally don't stack anything on top of your system or put it near anything else that may produce heat.
Last edited by a moderator: Feb 25, 2017
A

Just a bunch of good working ones, and a bunch of poor working ones. By the way, if your a smoker, dont smoke when using your PC or playing video games, I know a guy who smokes alot and his PC's stop working constantly because of his fans pulling in smoke and making a gunk on the motherboard, same would apply for any game system with fans. Dont gunk or get junk.
G

So it either completely works or it epic fails... I think i will take my chances without one. Hope your 360 starts working again.

AoBfrost said:
Dont gunk or get junk.
Click to expand...

Hehe, that's a good one. I need to remember that. Plus, you shouldn't smoke period, IT'S BAD FOR YOU.