**Walks in the room, and flips on the light switch**
CLICK
It's time for a revise.
I leave you this one image as a start. Get ready. 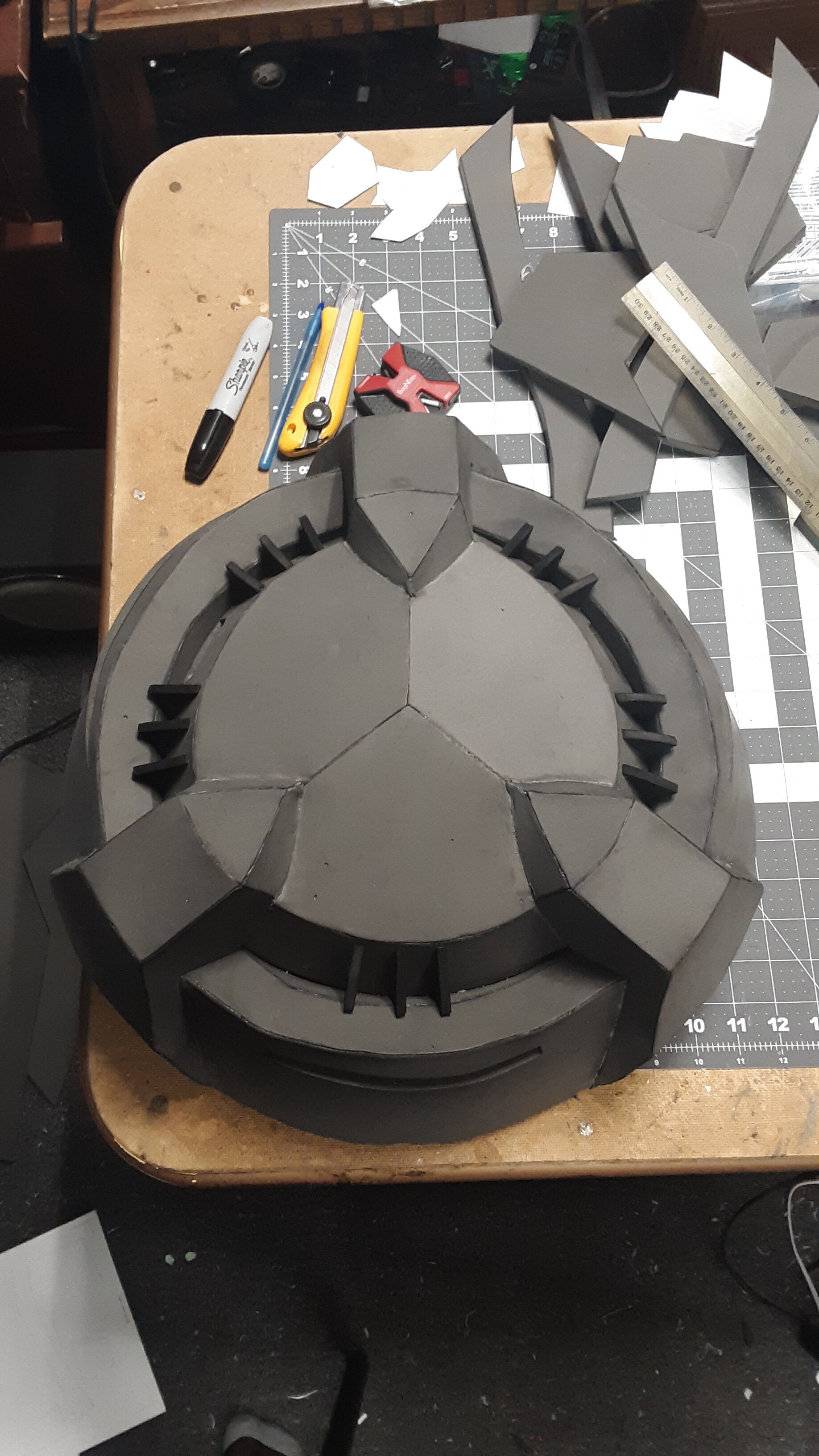 Southwest Regiment
405th Regiment Officer
careful to not get a sniper shot there. Make the whole thing blow.

its been a while. first snipped of info looks good already

RECAP!!
Looking back through this thread, I realized I hadn't given much updates after September of 2018. Since then a few things have changed on the old Ghost, which I feel I need to share as some of these new elements will be moving onto the rebuild. I'll also be making a few new changes as well and not just a body shell replacement.

One of the changes I made on the old Ghost was the front support for the body. 2 times prior to 2020 the PVC system on the front had failed, once due to trying to load it into my Jeep and a second incident where it lost a fight with a door at a convention (Yes, there is video evidence of this and it's sad to watch ) After the second break I went back and designed the front end to just be a straight shot of 2x6 down the front nose. This increased it's sturdiness so it didn't bounce around so much, and added further support in the form of 2 more boards running down to meet at the bottom board. Still used the PVC pipes to attach the wings however as that system worked great. 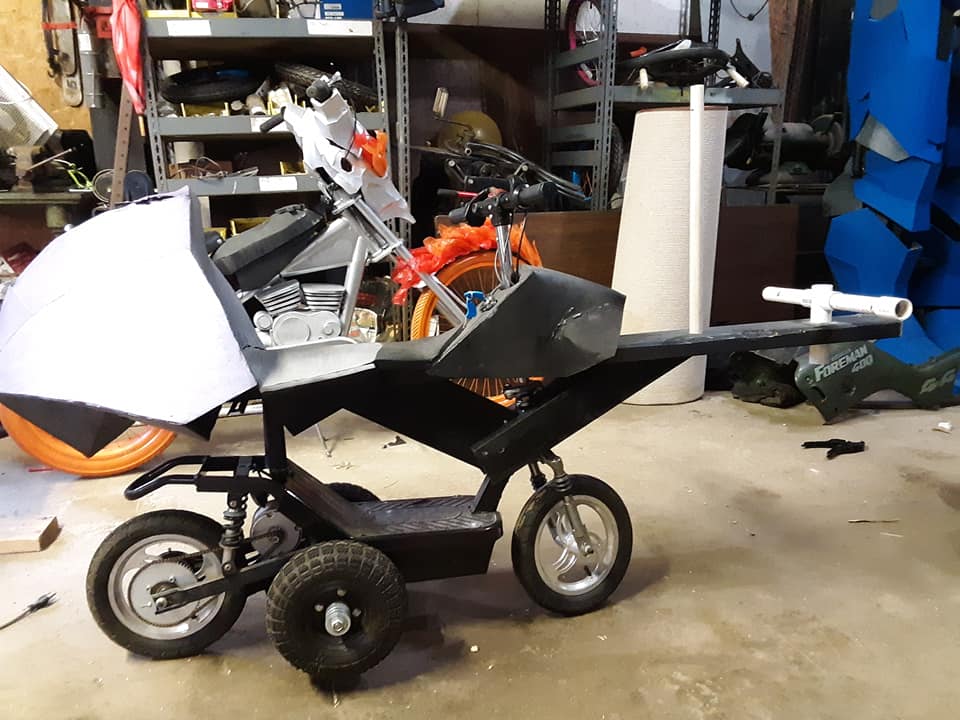 The other major change to the old Ghost was getting an upgraded scooter after the old one died on me during a ride....and left me to walk back to my truck....3 miles away..............I wasn't salty, nooooooo. Anyways, the new scooter has a higher capacity battery, a 350w motor built directly onto the front drive wheel, a better turn radius, 2 side wheels for better stability, a creep mode and full speed mode, reverse capabilities, and a higher weight threshold somewhere around 350 pounds. In theory it can reach speeds up to 25mph, and has a range of 20 miles. Of course I'll need to test it first before I can claim these numbers true, which may prompt the question, well why haven't you? Well, the new scooter was purchased and installed right at the start of May 2020, during the pandemic, so it was basically grounded from travelling anywhere for testing. Some minor tests were run in my driveway, but that's the extent of it. 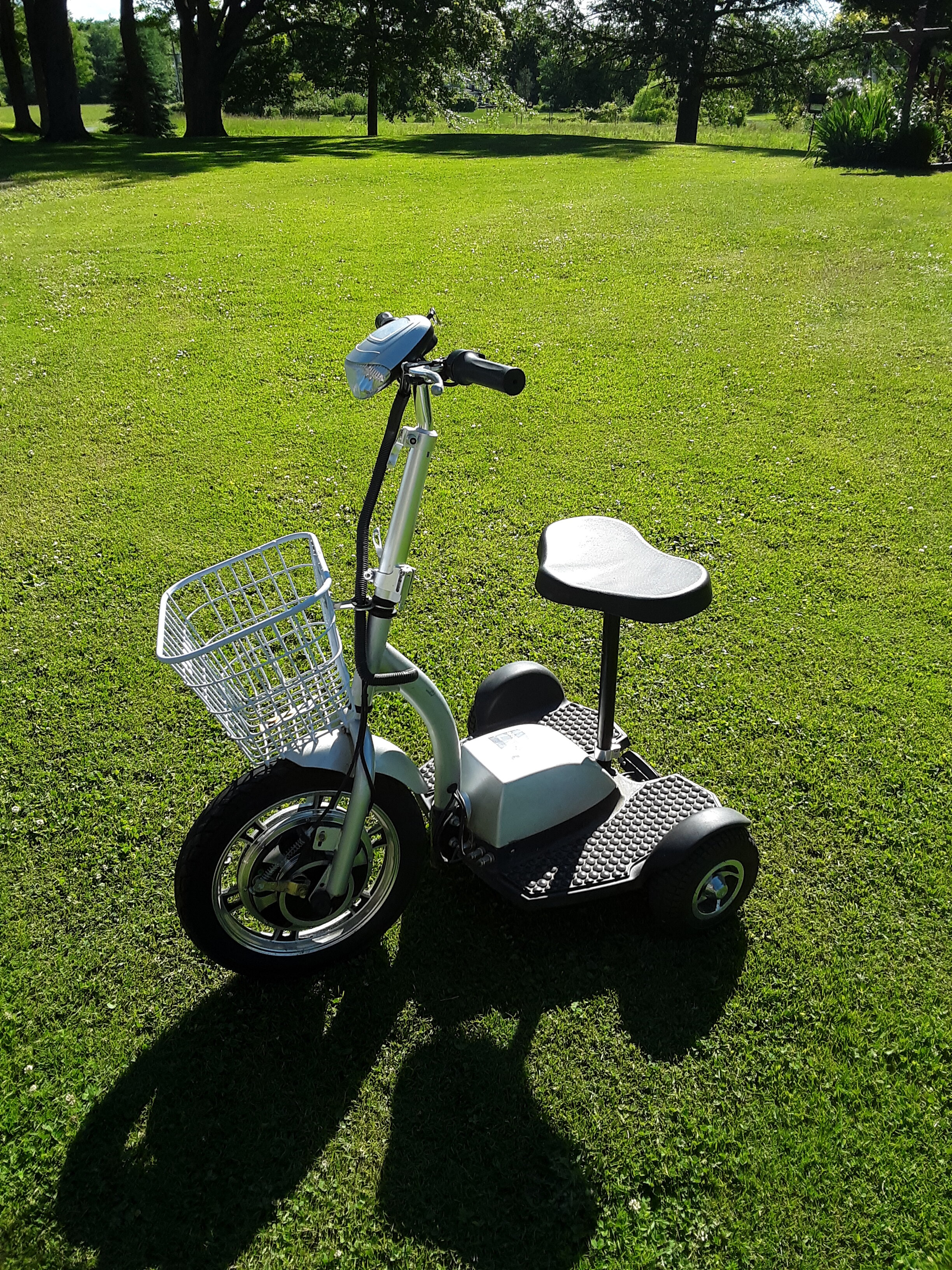 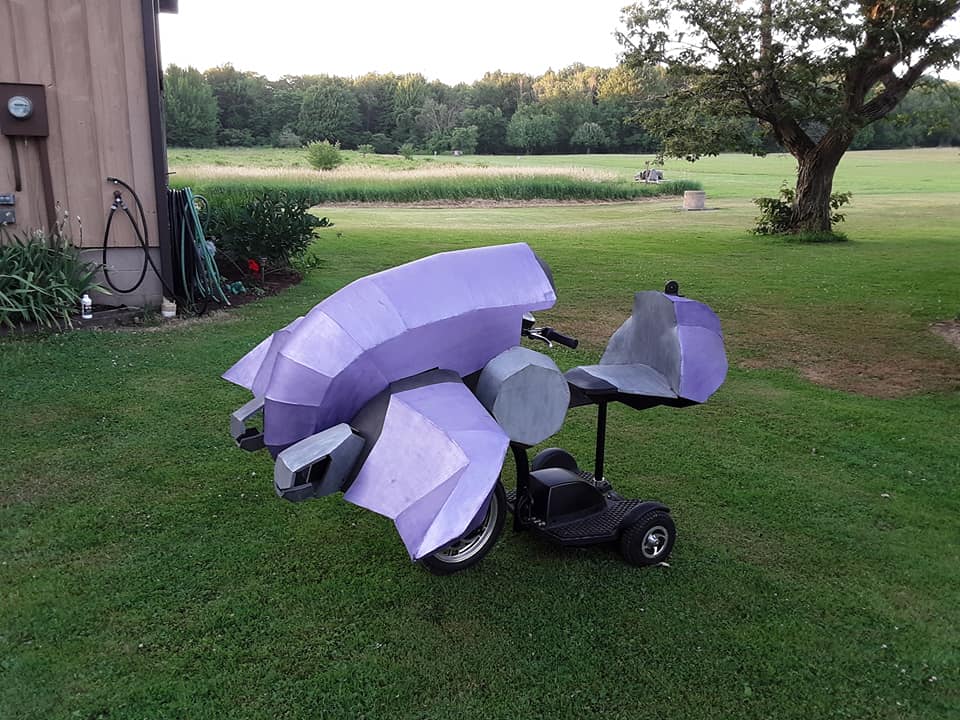 So some of these new features will get transferred over to the new Ghost, and a few new ones as well. As seen above, the old Ghost sits too high on the new scooter, so that will be getting addressed. The new Ghost shell is bigger than this one, so that will help in hiding the scooter better. How much bigger? Well you'll have to wait and see . I'm not sure if I want to keep the 2 side wheels, or opt to make it into a 2 wheel cycle instead, but once I make that decision there will be no turning back. With the bigger body I'll be able to add the front foot rests hopefully so legs wont have to be downward to the ground. Lastly, I'm looking into the reflective mirror trick that people seem to try and slam me over the head with anytime I post the Ghost anywhere on social media, but it looks grim. If the mirrors require too much angle then it won't work due to the front wheel needing to turn. I won't rule it out yet, but it doesn't look feasible.

Also, big shout out to Jeffw773 who has provided the 3D model for the new Ghost shell which I've been using to remake it. For the longest time the only available model was the old polygonal one I used for the first shell, but Jeff has been working hard to get better updated models of vehicles, maps, and audio from all the games which really helps out. Thanks Jeff

That's all for now, stay tuned for more progress pics!

Pacific Regiment
Glad my models were of help! I am very excited to see how the new one comes along

If anyone would like a link to my Google Drive full of Halo models the link is here:

UPDATE!!
So even before I made the engine, I had made the entire front nose cone and...gas tank thing? The little middle bit that goes from the nose cone to the seat, I dunno the official name lol. So while it may look like I built this in 4 days, I've actually been secretly at this for the past 2 weeks. I threw the new Ghost next to the old one for a comparison, and well, I'll let the pictures do the talking:

all i can say is GHOST JOUSTING!

UPDATE!!
Got one of the wings fully assembled, and brought one of the old ones in for a size comparison. Now just to repeat the process in mirror and get the other side made up. Still debating on how I want to have these attach to the body of the Ghost. Internally they'll connect via PVC, but externally I'm not sure if I want to use velcro again or switch to magnets or something different. It would take a lot of magnets I feel. 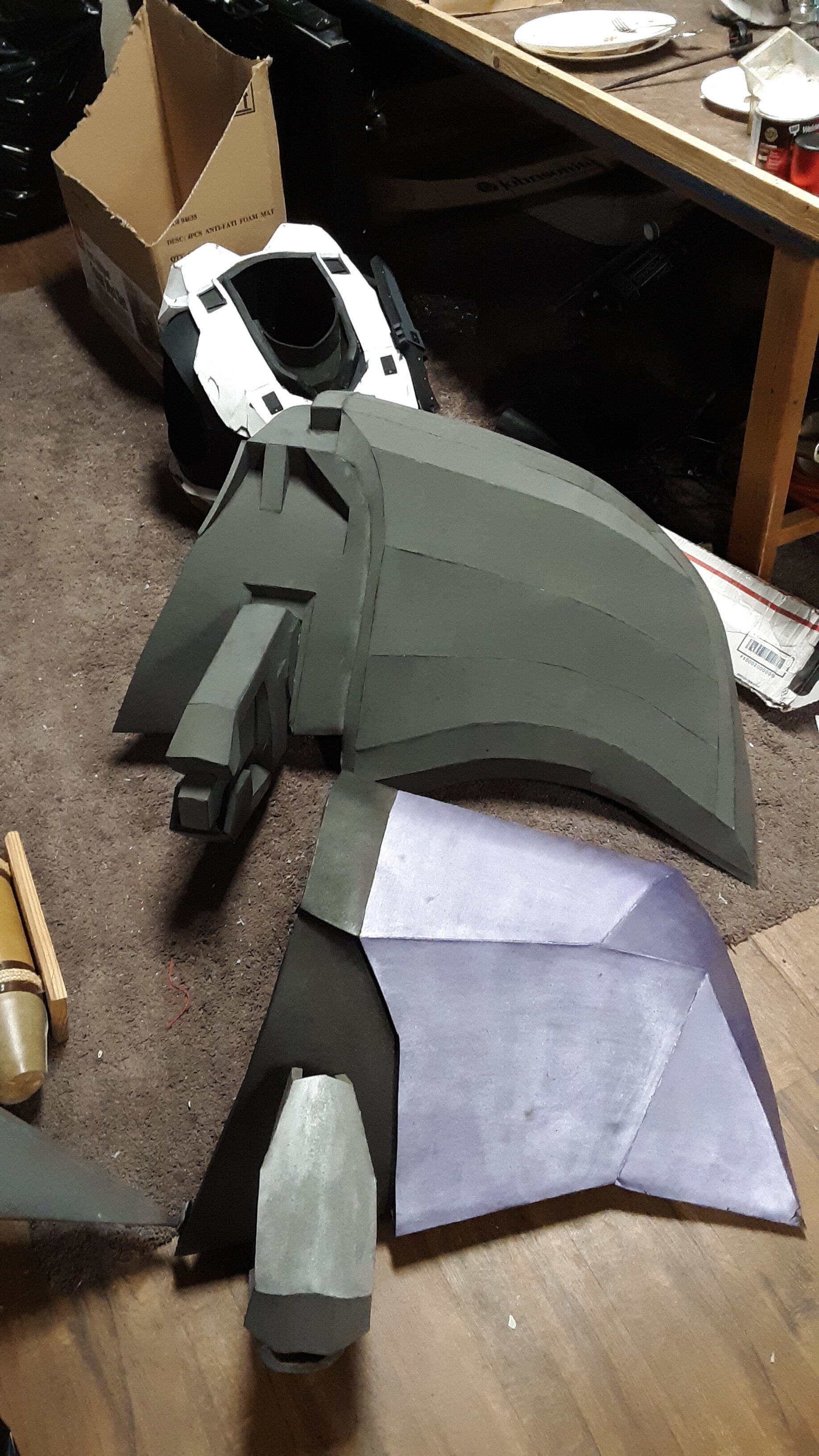 UPDATE!!
Both wings are now done so it's onto the last piece, the back end and seat. After that it's cutting and installing the internal structure, sanding and adding layers of plasti-dip, and then picking out mixing the paint I want to use. Torn right now between the classic paint scheme or the McFarlane toys version which has more vibrant purples. 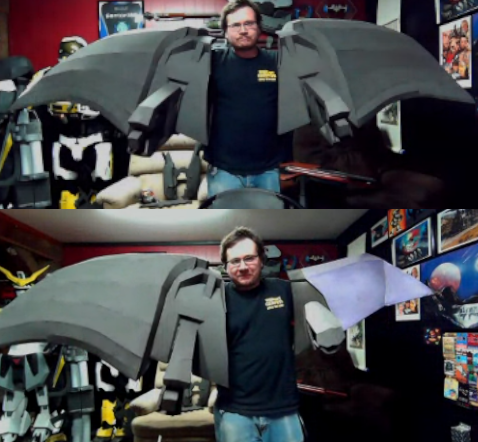 UPDATE!!
Backseat is now complete, main internal structural board has been installed, and about 60% of everything has been plasti-dipped. Now we wait for good weather to roll back around to finish the dipping, start painting, and adding the last bit of detailing to the Ghost. 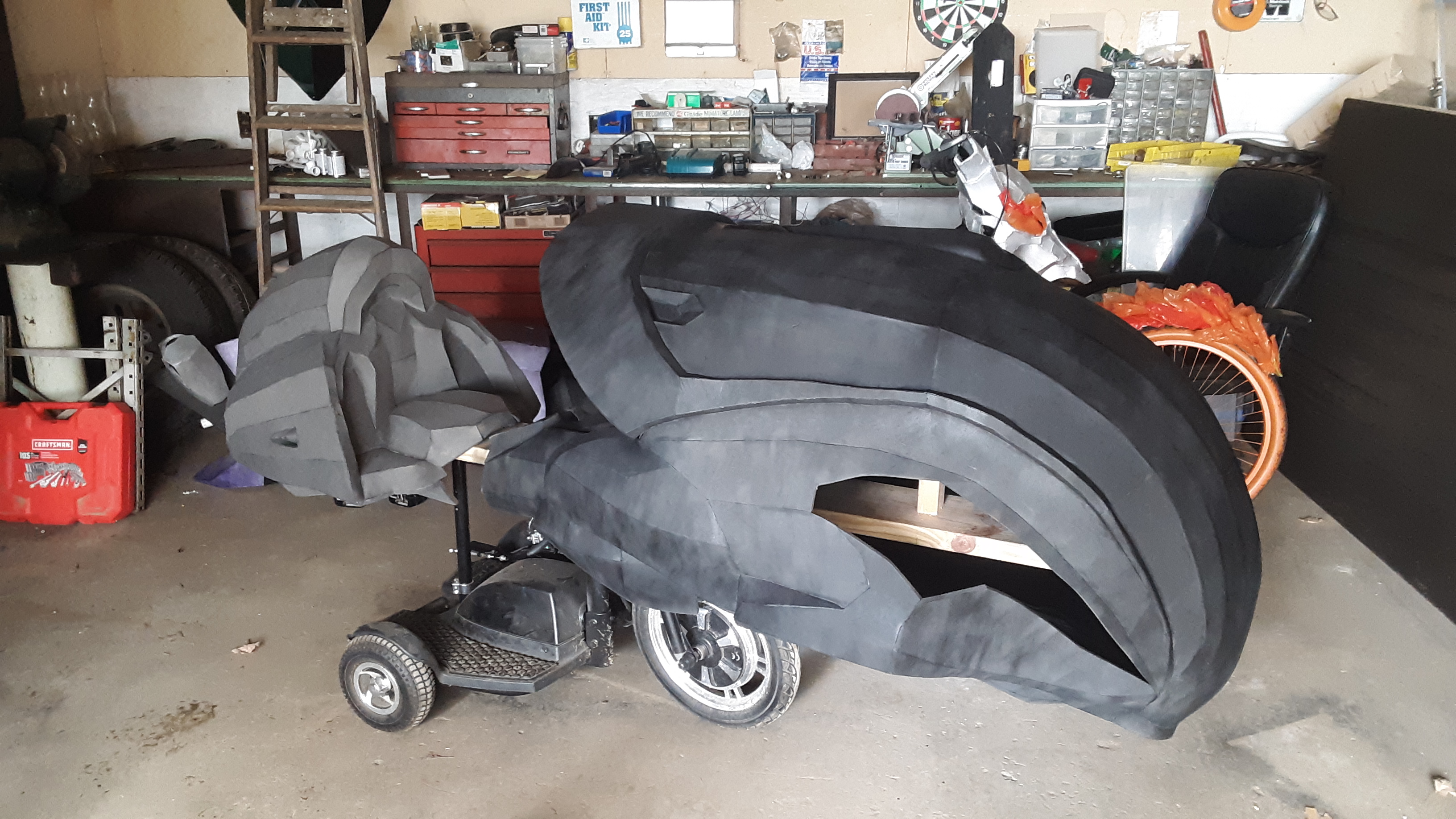 3D printing ODST armor soon. What type of filament should I use?

3D printing ODST armor soon. What type of filament should I use?