Southern Regiment
ok...yes he would make some money
M

not to sure bout the sword but a hell of alot of profit.

holy fricken crap!thats not to much of a luxury!

Southern Regiment
its nice looking...it was made out of plexiglass and he had leds the lite it up......i had the same idea when i was going to do mine but i put it away for now all i have is the handle made
R

MASTERCHIEF AKA 117 said:
well ....im pretty much out of words for this topic.
Click to expand...

dang it cost a hell of alot of money to buy an elite costume especially the one in the picture.

Southern Regiment
well it might cost alot to make it too

Just wanted to say thanks for the compliments and some more sword info.

I may start producing the energy swords for people, maybe as soon as after Christmas. I'm kinda on the fence about going hardcore into production mode because my initial intention was to write a thorough tutorial and everybody could make their own. But I know many people would still prefer to buy one rather than taking on yet another project, especially if they are up to their eyeballs in client work. Of course we're all here because we're do-it-yourself kinda people and I really want to pass on what I've learned to the community.

So the tutorial is definately gonna get written, but maybe I'll make a few swords for selling or bartering for other weapons too. I'm really on a quest to have a full set of prop Halo weapons. PM me if anybody want to work out a trade.

And deadguy, please don't let this discourage you! Its only in comparing notes on how we do things differently that we learn better ways to do them. Thats how this whole forum makes us collaborative, because we share our techniques.

Oh, and the laser balls do rock! On a scale from 1 being barely visible to 10 being blinding, they're probably around a 6 maybe??? I'll put it this way when I saw it in the store I thought that I would have to open it up and pack it with additional LED's and once I turned it on I changed my mind. It just glows a gorgeous blue...you can't really see the true color in the photos. Flash photographs overpower it a little...you can probably see that in some of my costume pics. But hey, at the very least it would be very little work to get exactly what you want from it.

Oh, and you can apparently us it as a level too.

I badly want the light in the sword to pulse like in the game. Packing all the electronics and batteries into the handle is such a TIGHT fit though, there really isn't room for any additional equipment. I gotta get with my tech friends and see if there is a resistor or something that I could use to variate the current from the battery...

suit... someone needs to take on the elite project. Bust out the foam rubber boys!
R

::gives up and puts away foam rubber::

Sean Bradley said:
I'm really on a quest to have a full set of prop Halo weapons.
Click to expand...

ditto, and nice find on the plasma grenades. If i dont go for the full set I'm thinkin at least a needler, dual SMGs, and a BR.
Last edited by a moderator: Feb 25, 2017
W

The Elite costume is awesone. any chance we could see a side view of the costume? Does the cosplay actor stand in one place, or does he walk around a bit. I'm interested to see how he gyrates his body and legs in order to walk with his legs bent back. It almost looks like he would be crawling on his knees, with stilts from his knees controlled by the angle of his ankle. Is this anything at all like it was done?

Looks sweaty in there.
R

here a quickly-made pic to give you an idea of where his body is. 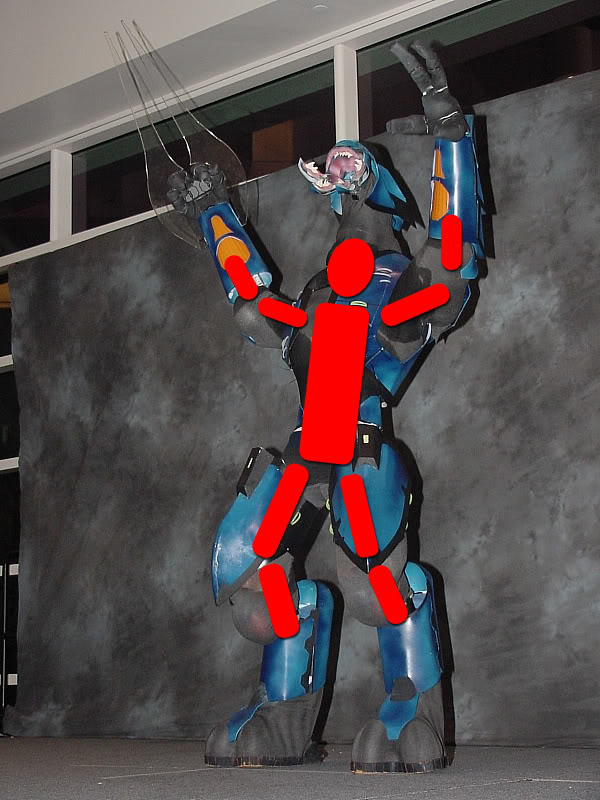 i would guess he uses some kind of stilts and arm extensions. his knees hit near the bottom of the blue leg armor and his shins/feet have huge pads in front to pull off looking like knee joints. he also heavily padded his shoulders to raise them.

Southern Regiment
looks good...the stilts is almost like what they did for underworld for the wearwolf