Yesterday I went to target looking at christmas goodies 75% off, well me being a tech geek, I love looking at electronics too, I saw a beat up projector box, so I went to the kids toy area to find it since I knew there was probably more there, I found shelves full of these cheap 160 dollar projectors onsale for 80 dollars.

I picked one up and paid for it, came home to test it out. 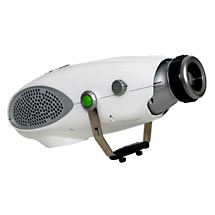 Not sure what the resolution looks like, but to me, It looks like pure crap, I dont have pictures of it, but the screen door effect (seeing every pixel) is too grave, playing ps2 and ps3 games on this thing made them look horrible, text was unreadable, even large DVD subtitles were impossible to read.

Overall, I would say the picture itself is almost as good asa standard TV, but because of the low resolution, the subtitles and any other text is impossible to read, so if you're watching something with just audio/langauge you can understand, it can be enjoyable.

My other complaint is while watching tranformers on DVD, the dark scenes were impossible to see, it was just too dark to see what was going on, this is because of the cheap light bulb they use as the light source. A simple led mod could fix this, but a led light isnt going to fix the crappy lcd resolution.

So....would I keep it? no, unlike other projectors I have used before, this one cannot be hung from the ceiling, there is no atatchment like most projectors have for ceiling mounting. without a ceiling mount, I have no space for this to go and project onto a wall, having the thing sit on the floor and aim up toward the wall makes the image distorted, the bottom of the screen is too small, and the top is stretched, the only way to make this work right is to have it aim straight and at the same level as where on the wall you want it to aim, and then I say again, there is no space for this. So to have a big screen, you must aim at the ceiling.

Watching on the ceiling wasnt too bad, it was kinda fun laying down, but after a while, it becomes annoying and uncomfortable.

My final word is.....I am returning this thing right now. I'm glad I only paid 80 dollars, If I had paid 160 at normal price, I would be even angrier that such a piece of junk cost that much.

Colonial Regiment
Thanks for the review Frost. I had seen these for sale and thought about getting one to try it out..

Now I think I'll just save for a proper video projector.
A

I returned it finally, but....

I used my old NES with it, and it looks GREAT! the old large blocky characters fit in with a large crappy resolution gigantic pixel projector, suprised it was very clear playing mario, pacman, megaman, and tetris.
A

any suggestions for a good, moderately priced projector?
F

lol oh man do i feel sorry for you
D

fix the screen door efect by miving it closer to what you projecting onto.
S

The VOOM projector at walmart also is crap. We got it b4 we got the Mitsubishi one and it was pixilated badly.
A

Cheapest best projector is this 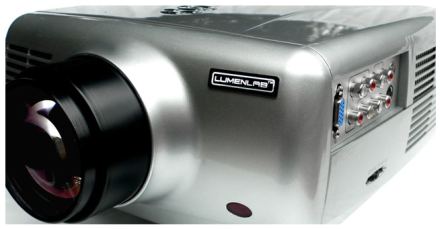 500 dollars covers it, it uses 30$ light bulbs for replacment, much cheaper than paying 300-400 dollars per light bulb for brand name projectors.

There is a brand name projector for 500 dollars, but it's bulbs cost 100 dollars a piece, too expensive, so better to go with the same quality (480p max resolution) but with a cheaper bulb, burns just as bright.

This works with all video game consoles, and computers.

I guess the lesson is don't expect to get a good video projector cheap.
A

I guess the lesson is don't expect to get a good video projector cheap.
Click to expand...

Well this company lumenlabs does make a very good projector on the cheap, I have seen it in action before, and it is the projector which made me want a projector in the first place, it's crystal clear quality makes it the best cheap projector, with cheap replacement bulbs.

Also, you can make your own projector with lumenlab guides, my friend made one out of a dvd player screen (6 inch screen) It is pretty good quality. But they reccomend 15" lcd's like PC screens. Light shines through the LCD, brightens the image and the lenses blow up the image. If you have a good screen, you could make a 720p or 1080p projector really cheap. For around 300-500 dollars, most people are making 1080p projectors, only downside is, it looks like crap, no fancy finish, just a wood box, plus because the size of the lcd is 15 inches, the box is like a foot tall. But the quality is unbelievable.
Last edited by a moderator: Feb 25, 2017
A

where do i find these "lumenlab guides"?
D

panasonic makes a good projector that is atually made for gaming and its a fair price. fair being $2000.
http://shop.panasonic.co.uk/invt/ptax200e

My utter descent into degeneracy while building a warhammer army

My utter descent into degeneracy while building a warhammer army