Pacific Regiment
Washington
This is my attempt at making Chief's armor from Halo 5. I have made a lot of progress since I started this project, and I have learned a lot since as well. Lately I have been painting these guys up and displaying the true beauty of them by using high-quality paints and lots of sanding.

Anyway, let me fill you guys in on my reasoning for this thread:

Once upon a time in a faraway land, there was a guy whose name was mblackwell1002, and everyone loved him. Right? RIGHT??

Anyway, he built a suit made of EVA foam. He used Master Chief's armor from Halo 4 as a reference, and was displeased with his awful creation...

Franken-Chief was an abomination!
His displeasure caused him to take a new approach, and that attempt proved much more successful:

Yet, he still had the drive for a better costume, and so he acquired a Flashforge Creator Pro to print out his pieces modeled by the amazing CarterBuilder12. Then came sanding, and lots of it...hours upon hours upon hours of filling and sanding to produce a satisfying result.

He started a thread about three months ago, but due to commissions, his project was delayed, and his thread died. *Blehhh*

And so his thread was reborn!!!

And now there are pictures!!

(in case you did not notice, the bobloheaddesh model is for "reference")
He used magical high-quality paints, and his work was successful. He is very pleased and happy to resume progress on his build...

He hopes you all enjoy, and he will happily accept any criticisms or comments of any form!
And may there be gifs!!
Hooray!

Colonial Regiment
This thread is much better being in third person and all. Is that your reference figure? Oh I see, make it look like your going for the bobbleheadesh look. So when you have a scaling mishap, it looks like it was on purpose! Oh and I don't know schankerz well enough to call him weird. Who knows he might think I'm weird. Btw nifty paint jobs
Edit: Have the other shin printing yet?
Last edited: May 9, 2017

Dude... Right on. Those parts are coming out so good. The paint jobs are stellar. Now I'm really looking forward to that painting tut.

Don't forget to keep working on your projects as much as you can. Monies are nice too, I guess.

He seems to laugh and smile at that remark...but he says he is sure the entire suit will come, at a later date.

He thanks you, and does the same thumb thing you did...


PerniciousDuke said:
Dude... Right on. Those parts are coming out so good. The paint jobs are stellar. Now I'm really looking forward to that painting tut.

Don't forget to keep working on your projects as much as you can. Monies are nice too, I guess.
Click to expand...

He agrees with the "Monies", he guesses, and thanks you for your compliments.

SI3RRA 117 said:
This thread is much better being in third person and all. Is that your reference figure? Oh I see, make it look like your going for the bobloheadesh look. So when you have a scaling mishap, it looks like it was on purpose! Oh and I don't know schankerz well enough to call him weird. Who knows he might think I'm weird. Btw nifty paint jobs
Edit: Have the other shin printing yet?
Click to expand...

His other shin is indeed printed, but he must take his time in assembling the two pieces and filling the gaps in both the seams and build lines. Much to be done, there is.

And he assures you that Schankerz is very odd, it is his natural state of being...

The Scaling, you say? He becomes angered and warns you...that he will strike you with the bobloheaddesh curse, to never scale properly again! He laughs an evil laugh, then chuckles and leans back in his chair...He says he must re-obtain his serious demeanor and resume some real progress updates.

"Let us continue with updates!" Says master Blackwell:
He first recommends showing the hip plates for his (soon to be) Papeesheewoosh undersuit: 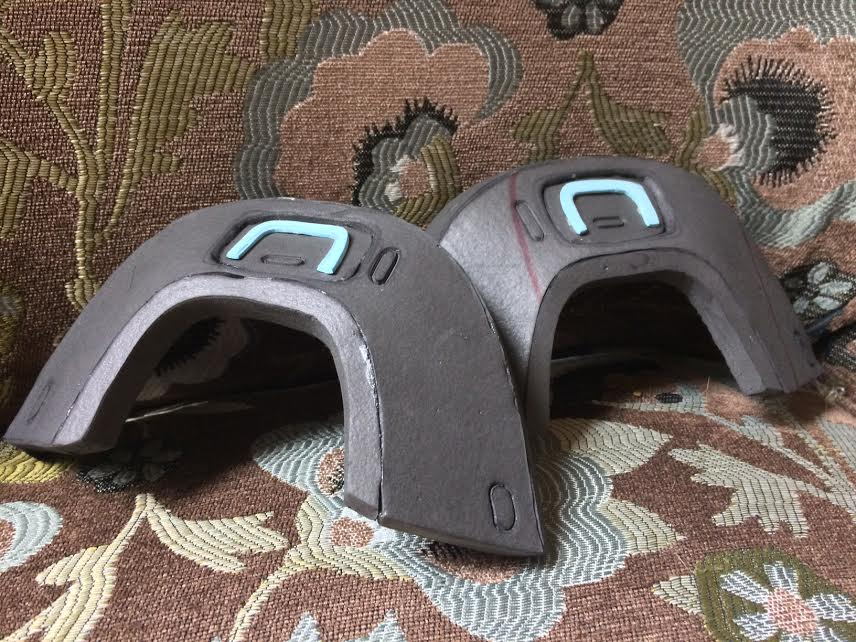 And then, he believes that he must show you his marvelous crotch armor, but warns not to stare too long, for 'tis rude. He once again chuckles and says that he realizes the above foam work his not his best, but he hopes you enjoy nevertheless. 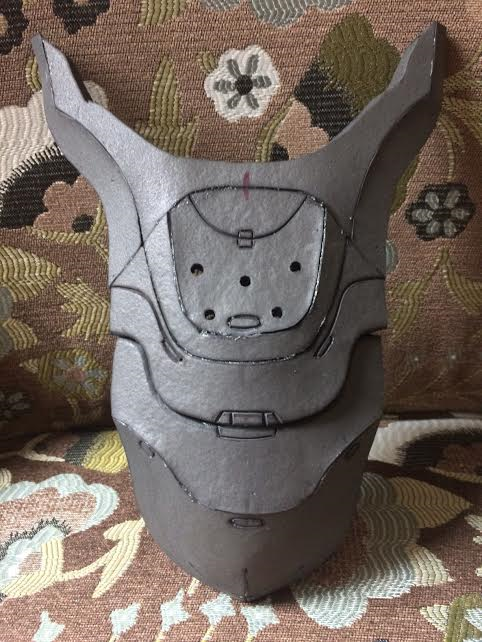 Now, he wants to thank Dirtsen and CarterBuilder12 for the wonderful model, and Demogorgon for the excellently unfolded and reduced models.

And he yells, because a three-legged cat has intruded the scene!

Beware the beast! He may be an amputee, but he is also feisty!

Sir Blackwell thanks you all for watching, and he hopes you all enjoyed...
until next time,
-Mr. Commentator Guy
Last edited: May 18, 2017

Colonial Regiment
Nice foamies but I think I missed something, when was Blackwell dubbed a knight? This thread is becoming more and more mysterious with every new post (witchcraft or voodoo and knighthood) what's next

Edit: I do like the cod/crotch piece it came out clean ..... i think the above mentioned did a good job unfolding it. mawrTRON 's template is pretty nice too that's what I had used for the my kids WIP builds.
I have Buck as my commentator for Halo 5 So this is who I hear as Mr commentator guy
Last edited: May 17, 2017

Southern Regiment
Wow, a narrative from Yoda himself! Hmmmm......... AND THAT POOR, POOR, KITTY! Got that tied so tight, cat probably thinks it's Vader's choke hold around his neck. Although I have to say that's some AMAZEBALLS foamage ya got going on there! Speaking of AMAZEBALLS, I should of taken a picture. Maybe I should accuse blackwell of plagiarism. So this is how it went down. Showed up to the gym at 5 AM, thought I might of been still sleeping. No, I wasn't dreaming. Literally walked by one of the cars in the parking lot, and on the back window of the Mustang said, "TAYLOR is AMAZEBALLS". Hah, AMAZEBALLS right there in real life. I immediately thought of blackwell. Lol, good stuff!

Tis a sad state of affairs when one must speak of themselves in the third party. It belies an undercurrent of insecurity in ones self. Delusions of grandeur as it were. It also behooves me to peak thus about "Squire" mblackwell1002 as the Knighting ceremony has yet to be preformed and witnessed by his most trusted of friends and allies. I would not see him purger himself needlessly until his title is confirmed. Regardless of his title, his fabrication of the armor is quite impressive and continues to be a source of inspiration to the masses, myself included.

Beware that 3 legged beast...... a vile creature that prays upon ones' soul. Do not be beguiled by it's innocent looking nature. Tis a creature of a most demonic nature that most find too enticing to ignore until it is too late. Best to release the hounds of Hell than to allow such a beast to roam free.......I fear for the welfare of my comrade. Take up arms all, to the aid of our smitten friend mblackwell1002.

To thyn own self be true

Oooh, very beautifully made soft parts! O_O May I ask for the pepakura files, for future use?

Pacific Regiment
Washington
Welcome, Spartans! Today, mblackwell will be explaining what's in store for the next month. So...what is in store? Let him do the talking:
"So I've got lots of stuff in store for the next 2 months. The first of those things is an M6H2 magnum"
Sir Blackwell has faced some trouble with his printer in the preceding months, but has now fixed his machine. Well, mostly anyway.
"The printer needed some replacement nozzles," says Blackwell "It's extruder was clogged to the point of no return, so I had to replace it, and with new nozzles, comes new extruder settings"
After a week of fighting the 3D printer settings, he is finally back on track and full steam ahead. The first thing to come off of the print bed is a part for his M6H2 magnum.
According to Blackwell, there will be an AR, and a lot of MC armor very soon.

That's all for now, stay tuned for pictures!