Southern Regiment
Very cool Walter, as if i didnt have enough to be jealous about....... :]
F

BlacRoseImmortal said:
Very cool Walter, as if i didnt have enough to be jealous about....... :]
Click to expand...

A signed 360 was sold for 11k, imagine what kind of amounts you could get for that *gulp*

Thats some awesome work on that rifle. Looks fantastic.

The AR should not ever be sold. Besides, the bungie guys would probably hate us forever if that happened.

Its a very special gun... very cool.
U

congrats Adam for ur achievement.

Southwest Regiment
I would never ever ever sell this item... it is my precious.

Those guys were more than generous enough just to sign it... I don't make the hand that feeds me angry.
C

welcome to the site Arbiter
F

dude how much for...

1: just both molded halves not together?

And send your message

Wow, nice one there. Only thing I have signed from bungie is a letter I had to sign because my suit appears in the Legendary Bonus feature (for half a second).
Also, a friend of mine who used to be a manager at my now closed gamestop, he got a job with Microsoft and was talking to a few of the bungie guys.
He told me that they started talking about fans and armor and I somehow was part of the conversation, he said that they kinda remember me...

Then it got me thinking.. It might not even be me since Sid was the first spartan to visit the studios..

I'll just keep thinking it was me they talked about
C

Man, I so want one of these... but I bet Adam's PM box is so full of other PMs that I wouldn't get a look in, and I don't have the money (even though a friend offered to pay for me lol).
M

Midwest Regiment
how do you go about pouring the plastic if the pour spout is where the clip is at.
R

Spase said:
Finally got my signed one cleared... now to build the display stand. 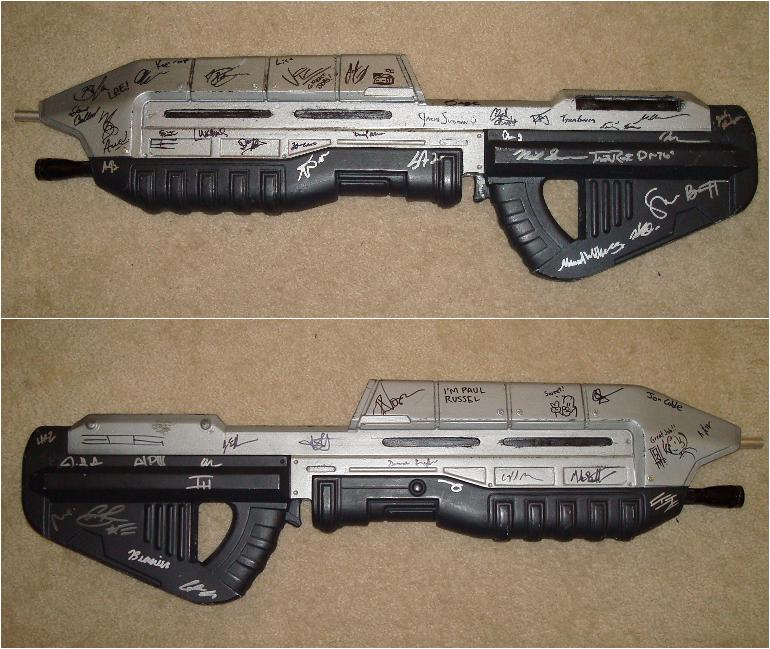 thanks for showing me that my mind cannot take the pure awesome of this picture. i am blind now.
Last edited by a moderator: Feb 25, 2017

rvb4life said:
thanks for showing me that my mind cannot take the pure awesome of this picture. i am blind now.
Click to expand...

If your mind can't take it, wouldn't it make you retarded?

will pay via paypal.

do you have any other weapons for sale? trying to outfit three of us.

Don't think Adam has any other weapons. Link has his Magnum and frag grenades. Good prices from Link. Smick6 has his spiker. Very nice piece there.
J

cool. im looking for at least two battle rifles, and some pistols.

still making mine, but Links pretty much rock!

PM me if you have some.