Stole this from Project 003's facebook status, that was taken off 4chan. So funny!!

I was cosplaying Hinata, and a friend of mine had come with me as Ino. We were walking around the con when she said she wanted to go to see one of the panels on a visiting speaker, and I wanted to keep looking around, so we agreed to meet up back at the hotel lobby later on.

When I was going through the dealer room I saw this group of guys, and one girl. They were all kinda overweight, and cosplaying naruto characters too. We made eye contact and I waved to be nice.

They wouldn't leave me alone after that. They followed me around the dealer's room and kept trying to talk to me and get me to join them. I answered the first few times to be nice, but I didn't want to go anywhere with them, they also smelled really bad, breath twice as much.

I managed to lose them, but when I got to the doors of the convention hall/hotel where the panels and stuff were being held, they spotted me crossing the street.

They acted like it was a game, and started hooting and hollaring as they chased me to the elevators. I was really freaked out now, and I really didn't want them touching me. They were still a bit away when the doors to the elevator going up opened, and there was this guy standing in there alone, cosplaying as one of those odst halo soldiers. As soon as the naruto hambeast leader came closest to the elevator, ODST guy steps up and punches him in the face. The guy hits the floor and the whole group is staring at us as the doors close.

I feel bad cause I just stood there quietly, and he got out on the third floor without saying anything. Definitely one of the coolest things that happened that year!
Click to expand...

Totally gonna do this kind of shenanigans, tom foolery, and douchebaggery at Dragoncon!!
Last edited by a moderator: Aug 2, 2017 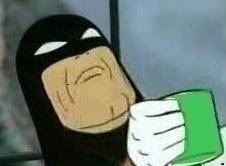 That is why every con needs an ODST squad in attendance!
B

wow this is just great XD. Makes me want to push my odst buld to the front of my cosplay list. Helljumpers Hu RA!
I

I hope the rest of you guys follow that example of beating up hardcore Naruto fans, they definitely deserve it.
T

While deep down I'm cheering with joy when I hear (read) about people getting put in their place. I can't help but wounder if that was the "proper" thing to do in that situation. A simple hand guesture that implies, STOP, Piss off,.... something, would have been better than tagging that person in the face. Granted I would of loved to have seen it. Maybe they had it comming. If they did have it comming, I would problably been the one to throw the punch.

As a group, not as well know as the 501st, we still have to act as if everyone knows us and our actions will reflect on all of us.
P

If he was carrying a 405th banner or his armour was emblazoned with 405th insignia, I would certainly agree a standard of behaviour is required. But the 405th is not THE blanket Halo Armour Organisation equivalent to the 501st to Star Wars. (Who knows though with 343s Halo Waypoint features we might be one day.) And as such it's up to the individual to decide what standard to conduct his behaviour if he's not representing the 405th.

Having said that I wouldn't have belted the narutard but if someone else in my company did, I'd brofist them.

European Regiment
Well, he must be happy that it wasn´t a Spartan who hit him, in that Case his Face could be flying to the next Bus Stop^^

And yes, Cosplay is NOT thought for every BODY. Lucky that the Fire Warners didn´t get on from that Smell you described!
K

Does the Hinata cosplayer deserve to be 'beaten up'?

European Regiment
Are they in there?

Pacific Regiment
That's pretty funny I don't think it was right that the ODST punched the naruto guy in the face but then again some of those cosplayers really over step their boundaries at con's and invade personal space and sometimes think there actually their character their dressing up as so he probably really deserved it.

I had something not quite similar to that happen last year on hollywood blvd during halloween while people were getting a bazillion photos of me as Carter one drunk guy thought it would be funny to photo bomb me by placing his head in my blind spot of my helmet and making a stupid face, so when the picture takers were done I turn around starting to head off and I accidently head butted the guy in the face, needless to say he was pretty pissed about it.

Confession from a Convention

Confession from a Convention