YAAAY! I'm in Ogden. There are a couple members here in Utah, but they don't seem to be super active around here. Especially not in the fan film thread. I hope you stick around and stay active.

We're still not sure on a location for filming. Since we're so spread out it's kind of hard to find any middle-ground that's easy for everyone to get to. I'm thinking southern Wyoming, but at the end of the day it all depends.

Would you like to go over the script? It's pretty good. The first part doesn't grab attention like I want it to, but it gets everything set up for the other two parts, so that's something I guess. Send me a PM and we'll get you access to it if you'd like.

Everyone, KillerEby and I have exchanged a few words about the opening scene of part one, and I think they had a great idea, so without a huge rewrite I changed it slightly. Go check it out and see what you think!

Angus314 and I have been talking as well and I am going to try to have more documents up here within the week, if I can. I'm training a new guy at work and hoping to get a new job here soon, so that's been taking up all my time. Sorry for dropping the ball here so much! When life settles down (if ever) I'll try to update this more frequently. Until then, please feel free to pitch in, give suggestions, edits, comments, or whatever! We need all the help we can get!

Kind of late to the game but I'm located in the Denver area and would love to help with this in any way I can. I have experience in foam, fiberglass, sewing and 3d printing. Have made regular sized, platform and 12 foot tall stilted suits. I'm also active duty military police working in SWAT so have alot of experience in small team combat tactics. Let me know if you'd like any help!

MP, huh? That's cool. What branch are you with?

Right now I myself just started a new job so progress has been very slow. Angus314 has been a huge help and Shadowshail has, too.

If you wanna take a gander at the script, lemme know, I'll throw you an invite to Google docs so you can read and comment on it. Feel free to offer all the advice/ rewrites/ ideas you have. Part one in particular needs some tweaking; it doesn't grip the way it should...

For the fan film I'd like to get our Spartan builds figured out in terms of permutations and etc... Master chief I'm thinking will be very simple; any version of the Mjolnir Mk V with the classic helmet will do.

Kurt, on the other hand, is a bit different. There's no depiction of Kurt that I can find until he grabs an SPI suit on the cover of Ghosts of Onyx. Because of that picture everyone assumes he has a dome helmet. I disagree.

But tell me your thoughts? How is Kurt going to look?

Mountain Regiment
405th Regiment Officer
Well are you going for after Onyx look or just some kind of permutation that distinguishes him from the others? Technically before Onyx he would have the same suit as Master Chief if you wished to stick more towards cannon timelines. Though i think if we go more of a specialty role type like they did with Blue team in 5 where each had their specialty armor pieces that could be cool.

If you’re going before onyx I’d say a black mk IV suit would be the look to go for. If we want to keep the armor in the same game design we could do recon.

Before Onyx. Timeline of the script is shortly after Kurt is assigned to the team.

Also, it is now a necessary requirement that we find some way in one scene to have "where's Dirtdives" dabbing in the background. We should also put him in the credits.

I like the Halo CE anniversary edition or whatever they call it. We can modify or add permissions as we see fit, but I think both Kurt and Chief should have that as a base. We'll need it to be close as possible to tier 3, though. If we're presenting this to the forum and potentially the greater internet as we know it, we need to represent 405th, Bungie, Microsoft, and Mountain reg. really well. Let's not just go half way. Know what I mean?

We can do slight color changes for painting if need be if we are keeping suit style the same to help and also the chest numbers we can make sure are visible just like in Halo Wars.

I absolutely agree with the not going halfway. We will need to make consolations with the script to keep it so the budget doesnt fly out of control. But I still think we can make a good movie!

Southern Regiment
I havent been paying attention to this thread too much because I dont want to be spoiled when the film does release, but in my mind I picture the scene from foreward onto dawn where amish beamish is patrolling the ranks, but they need some recruits to do something and you hear the officer in the background telling where the heck is dirtdives. You know that Oracle is always up to no good in the forums. I guess old habits never die XD 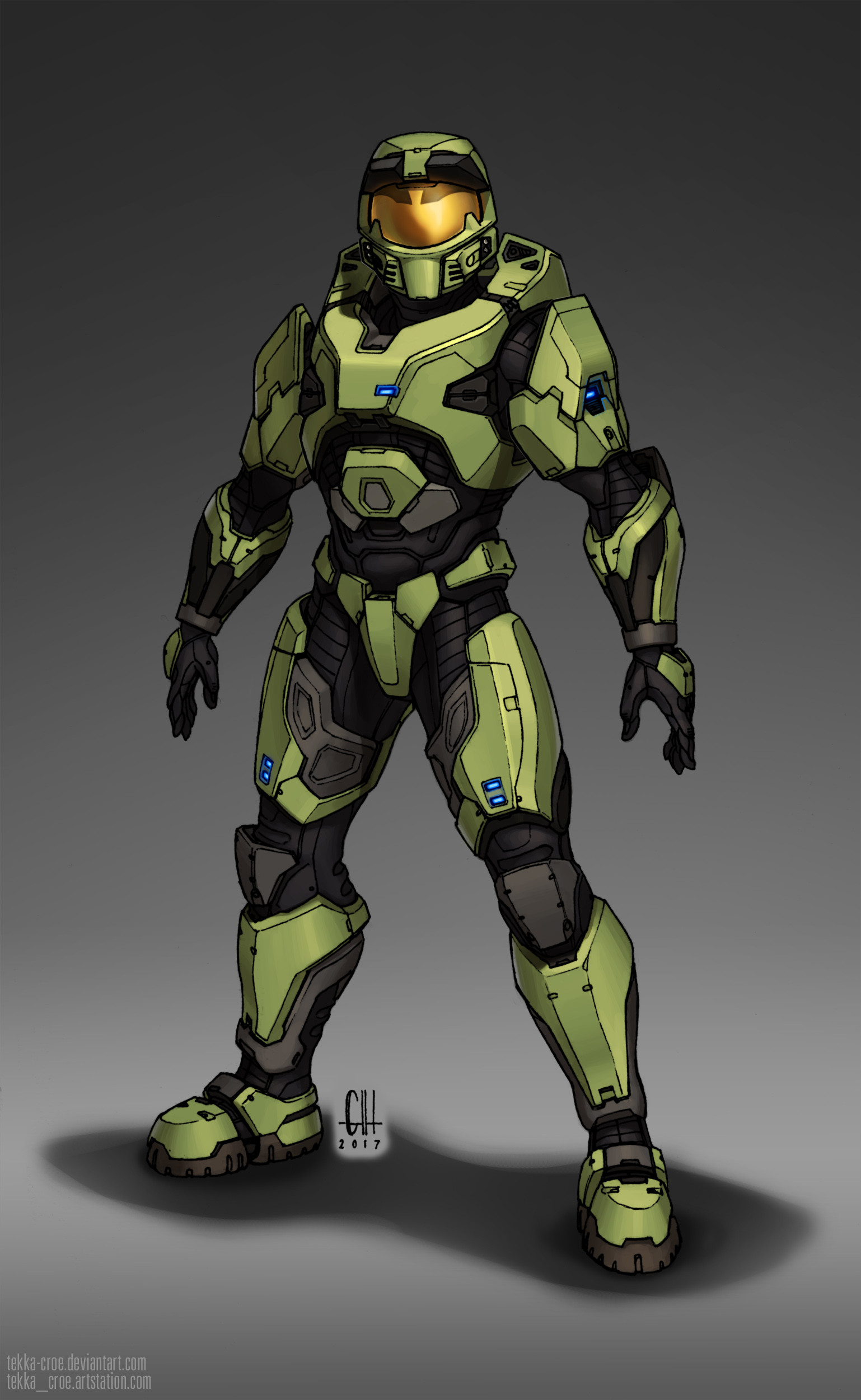 I like this for the Chief's armor, and as Kurt's base. Colors and permutations for Kurt, though, I'd like to set in stone. Unless I'm the only one who cares that much... Am I making too big of a deal out of this?

Mountain Regiment
405th Regiment Officer
I think that all depends on how accurate you want it to be. I havent read a huge amount of the books but fromnwhat i remember they all had the same suit design in the early days. Now once again its your film so if you want ro take liberties and give Kurt some permutations to help viewers identify the icon of master chief and one of the other Spartans you could do that.

This is of course if im wrong on lore stuffs.

No, I think you're right. We should try to stay as close to lore (at least the consistent parts of it) as possible.

I think using PerniciousDuke's and TurboCharizard's bucket to boots Marine's is a great idea. To do the Marines, I want to come up with a uniform each Marine is going to wear. It will break realism if each Marine has a different uniform on, you know?

Same for the ODSTs. I think there's a uniform list earlier in this thread that goes over what I'm thinking. It'll just be up to us to make them all look great.

Aliens. There are not really a LOT of aliens seen in the film, but there are a few, and that's going to be tricky. Especially because they should look like real, living, angry aliens. Who all should we bring in for those? What resources will we need? How do we get those looking Tier 3?

Probably a question more specifically for Angus314 though Shadowshail you might know: How are we going to do the explosions? Explodium like they use in hollywood looks cool, big ol' fiery bursts of propane or other gases. Super fantastic, but a lot of real explosions aren't that fiery. I think that will be a benefit for us, but we'll still need to figure something out. In particular, ***SPOILER*** there is a shot where a wraith tank destroys a pelican. How are we going to do that? Are we actually going to show it? Will it be off-screen? Off screen will be easier to film, but harder for us tell the audience that's what happened.

Also, what happened to clonecam117? Is he still alive?

Angus and I have spoken a little bit on other media; I think it would be a good idea to set up a meeting and get everyone who knows something about film making involved.

the problem with explosions and certainly the problem with the vehicles being destroyed or even on screen is we're going to have to do some crazy movie magic to make them happen or have a larger budget than $0. I was thinking I could 3d print the vehicles and used forced perspective to make them look life sized just like in Harryhausen films. With those being much smaller it will be cheaper to explode them with small fireworks. we have to be careful about where we use fireworks though. Colorado has a hard ban on any fireworks.

For aliens, we either have to get them in suits or we write them out of the script. Full sangheili costumes are going to be expensive and hard to move in. Same goes for every alien to be honest. I know of a couple people with full Sangheili suits that we could contact that might be willing to help but like I said they'll be hard to move in.

Mountain Regiment
405th Regiment Officer
I think depending on the way it is filmed we could use smaller firecrackers to give a location and sound effect for acting on the cheap and then add more particles in post.

As for aliens i think im going to have to agree with Angus314. We can always film it slightly different to embellish the suspense though ie, sound effects coming from the woods, flashes of light to represent the covie gun fire, and maybe even a simpler blair witch style at times. Think end of Foward Unto Dawn in the forest type of filming.

Exactly what I was thinking. We could even flash purple lights to simulate lasers

I should really make one thread for each zoom meetup: the meetup

I should really make one thread for each zoom meetup: the meetup