Hello Again,
So last year I joined the forums alongside the Discord server and was very enthralled with everyone else’s builds that I decided to start making plans for my own, whilst creating a 3D Model of it since I’m more familiar with digital space, however as 2020 ran out of time it became clear to myself the project I was working on wasn’t what I wanted and I had a change in mind both in concept and design.

For a New Year brings a New Project!

As said previously I’ve been gawking at the forums for a few months now, the level of detail on everyone’s posts are amazing it’s been inspiring just browsing 405th alone!
As for my own plans specified in the title, I’ll be documenting the build of a Reach Spartan since my introduction into the series was Reach alongside many fond life changing memories I keep by my side to this day, I’m sure many of you can establish a similar bond with one of your favoured halo titles as well.

I’m new to Cosplay so I’ll probably make a fair amount of mistakes and if you feel you have some bombshell knowledge feel free to share it, never the less I’m not afraid to make those mistakes and learn from them and push through to the other side!

Now down to some of the Specifics!
So Using Vanity I was able to visualized my Spartan right out the gate which helped solidify the Design, here are a few different versions that didn’t make it:

Whilst I had the Armour down to spot the difference level. I was messing around with different Helmets and Colour schemes these where between Black & White as a Main colour both looked Okay but something was up in my eyes, this is where I started to experiment with a primary colours I thought about Red but wasn’t a fan, I knew Yellow would complement Purple but it was to much of a contrast on Armour for my liking and so I decided to try Blue too ( It’s like Power Rangers “Go, Go, Power Rangers!” ):

While I liked them something still seemed off so I fiddled about with the Helmet and trying to find a simpler Colour palette I settled on Silver as the Primary colour, this was the outcome: 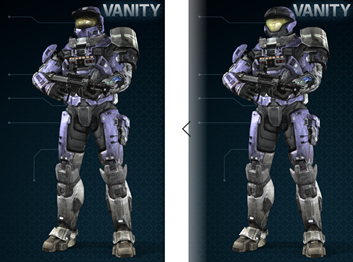 Deciding on the Helmet was difficult, it’s still and on and off battle on one hand the MK VI allows for no fogging up the visor but on the other hand you have the Air Assault Helm which leaves room for greater visibility, it also just looks cool personally.
Currently I’m leaning more towards No Fog/Okay Visibility so the MK VI at the moment is looking fairly snazzy plus as a fan of Red vs. Blue I think it also carry’s a little bit of that show with it too. 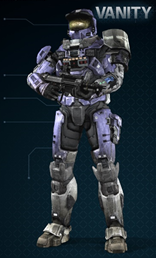 The low down on the Full Armour selection is here:

Other Steps further to come

Extra Thoughts:
1. As an additional attachment of Armour, the Tacpad/UGPS allows for a better sense of personality to ones Spartan, it also can make the Cosplay a lot more immersive especially if the Tacpad or UPGS is interactable or a in-real-time sensor and thus my thought comes into play,
Phones! We use these devices on a daily basis and we carry them around with us all the time, I assume people at cons also use them on a frequent basis too so why not incorporate them into your own Cosplay,
Where the Tacpad/UGPS is placed it usually has enough room for a smartphone to be slotted into place therefore if you decided to incorporate your phone as the Tacpad/UGPS you would not only have quick access to your phone but also have access to a sensor or Tacpad that would be interactable which could lead to some great potential if used correctly, for instance you could have real time interactions with other Spartans, a surprise attack from the Covenant and back up from a marine nearby.

2. Alright so I have a question about Electromagnets!

first off has anyone tried out electromagnet in their own cosplay, if so, how’d it go?
Second and most importantly:
In terms of solutions of holding Armour in place I was discussing with my farther about how the harness system works alright but is kinda tricky to hide, then magnets were suggested and of course I replied along the lines of they’d be yeeted into the atmosphere due to how weak some of them are and even if you used strong ones how would you easily get them off?

so when he brought up Electromagnets my interest was piqued, we continued to discuss about them how if the magnets had enough power you could hold a strong enough current to keep pieces in place without too much issue, of course we ran into the question eventually you’re going to run out of power so how would you combat that since battery’s aren’t really designed for this type of use.

Continuing the conversation, we conversed about how battery packs would work and he brought up the idea of using small car sized battery’s that are used in certain cars which are about less than the size of an A4 piece of paper but then ran into how and where do you place this battery if it’s going to be in constant use without ruining the suits design?
Well we deliberated about where it could be placed and my father thought behind the back would be a good idea I agreed since you could hide it in between the armour and back, then upon further thought I think embedding it into the armour would be an ideal option of course leaving the option to replace it is a must but it would most defiantly be the best way to hide the battery from my understanding and I don’t foresee it causing any heating issues or safety hazards either so I guess this might be an option.

That’s about it for now, See you in the next update!
- Mystic.

Mountain Regiment
Looking forward to seeing it get made

You could use LiPo battery packs to power the magnets, but the power draw of the magnets would still be an issue. Rare earth magnets usually stick pretty strong to each other if they are in direct/very close contact, and you can slide them apart. You could also use a lever like magnet bases for indicators do it, but that requires a good bit of depth. A combination of strapping, friction fit and magnets would probably work best.

Coreforge said:
You could use LiPo battery packs to power the magnets, but the power draw of the magnets would still be an issue. Rare earth magnets usually stick pretty strong to each other if they are in direct/very close contact, and you can slide them apart. You could also use a lever like magnet bases for indicators do it, but that requires a good bit of depth. A combination of strapping, friction fit and magnets would probably work best.
Click to expand...

I'd also mention, be VERY careful working with any type of LiPo. Those babies pack a mean punch if mishandled, and soldering the wires on them can pose a significant risk. If anything, you may be safer working with something like a high-capacity portable charger. I also will recommend having worked specifically on the Reach suit's lighting to not only take your time planning it, but have sections run independently wherever possible. Trying to solder an entire suit's network in parallel means you have to do it while you attach everything in the armor to your panels.

What I have seen others do such as moderndaymarc , is use rechargeable block batteries for sections of his Mark VI armor like the thighs and chest. That way they are easily swappable, easy to pair an LED to, and very forgiving when you accidentally make a light go out and can quickly replace it. It also keeps you from having to dance through 20+ wires getting in and out of your suit.

NobleofDeath16 said:
be VERY careful working with any type of LiPo
Click to expand...

I have seen what can happen to a RC vehicle when these go bad. Pretty scary stuff.

I personally have a high capacity USB battery bank that will be stashed in the back of the torso. From that I am able to power my entire suit.


NobleofDeath16 said:
It also keeps you from having to dance through 20+ wires getting in and out of your suit.
Click to expand...

To avoid this problem I have each armor piece broken off into its own section and use simple wire clips to join everything together
(I say this having never fully suited up so it still might be a pain :-D)

MrJamin said:
I personally have a high capacity USB battery bank that will be stashed in the back of the torso.
Click to expand...

Those usually have LiPos in them too. With proper protection circuitry(overcurrent, overdischarge and overtemperature protection) they don't just blow up, but I'd still be careful with big packs since they're nearly impossible to extinguish once they're burning. As long as you don't mishandle them and don't have them heat up too much, they should be fine.

Looking forward to your build! keep in mind also you can use rechargeable AA's in a battery case.

I'm a complete and total noob at everything, but maybe if you used electromagnets, to keep them from sliding, maybe try putting a lip there so they can't look outta place? Also I know i'm late

First Build/New to Cosplay: Into Hell
2