As of 9:15 tonight. It. Is. Completely. Done! Belt is repaired and helmet is padded (very badly) but she is done!!

Time to pack it up and wedge it into my trunk since my car is full up with friends tomorrow!

Since suiting up for me is a two person job and I've been up since 5:40 am watching my wife apply her cosplay make up, I've instead opted to do a trunk shot full of disemboweled ODST 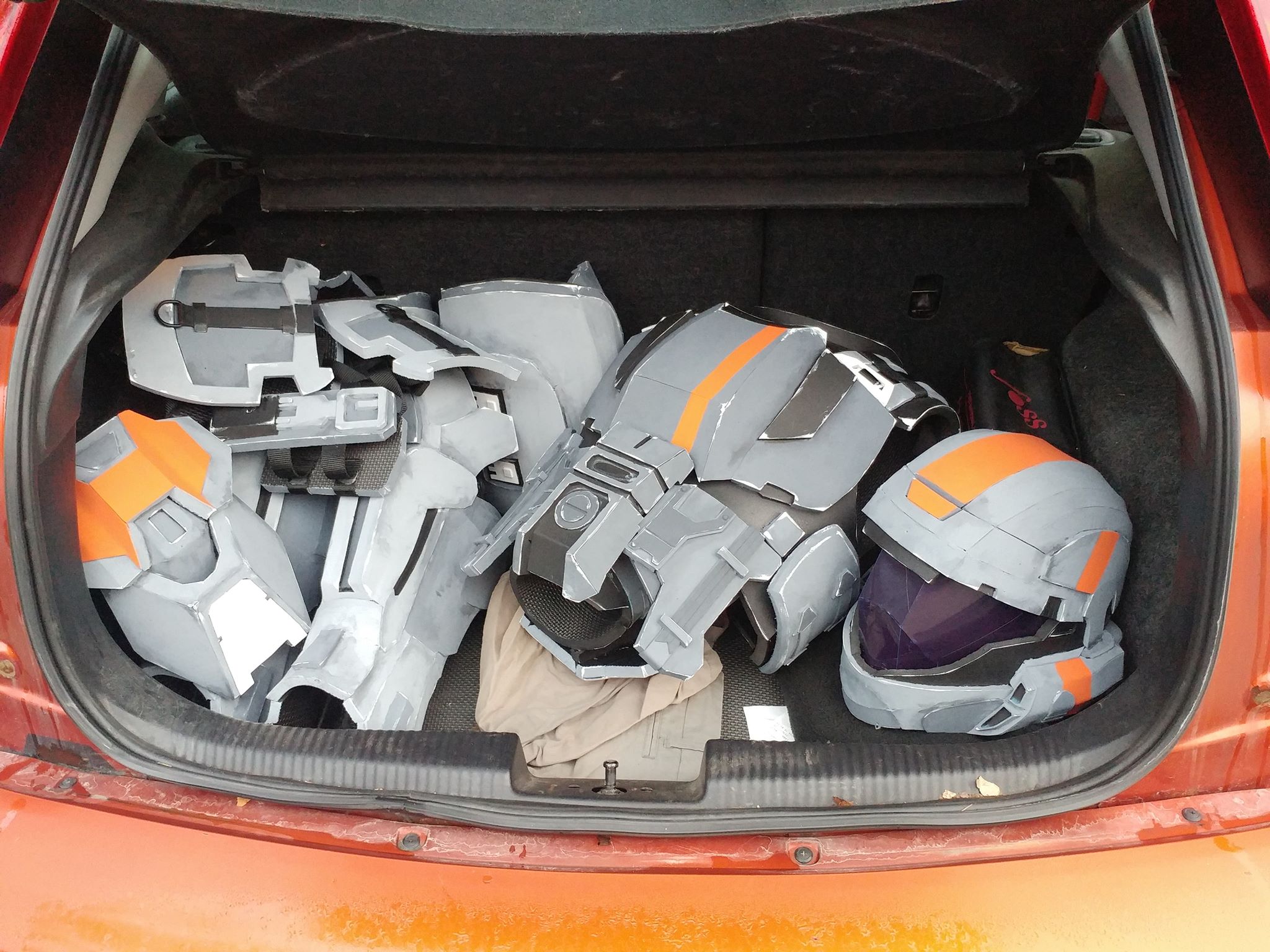 Complete with hot glue webs across the visor D: Gotta get that cleaned up before I run around.

And I have to confess a major thing... I've kinda been sorta lying with the whole 'oh I'm weponzless' shtuff... I do have a BoomCo magnum I'm going to use. Its bright red scheme bothers me but its better than having nothing ¯\_(ツ)_/¯

Fan Expo was a blast! Aside from choosing the busiest day of the con and bumping shoulders with nearly 50% of the crowd it was awesome! I had a few 'Oh great Spartan suit!' comments and a few correct 'Nice ODST!' comments to so I'm glad people know their terminology lol

Shenanigans were had and of course this old meme came around to me in real life : 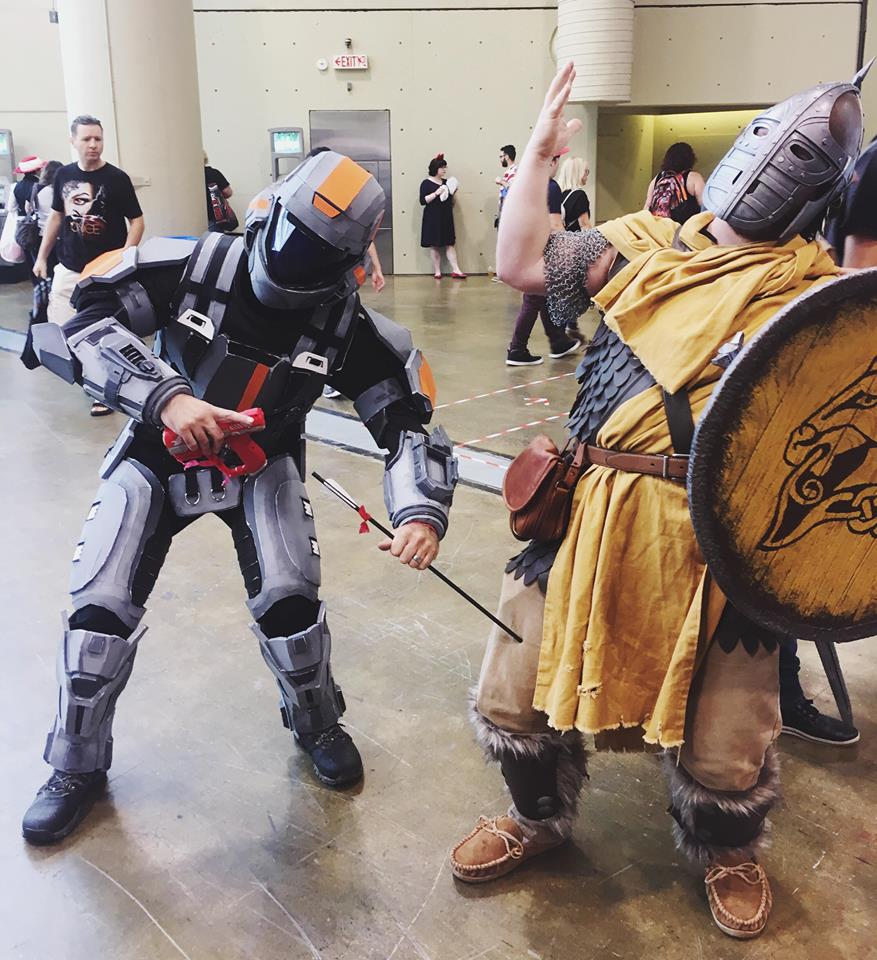 And I think I met a Silence from Dr.Who... I could be wrong. 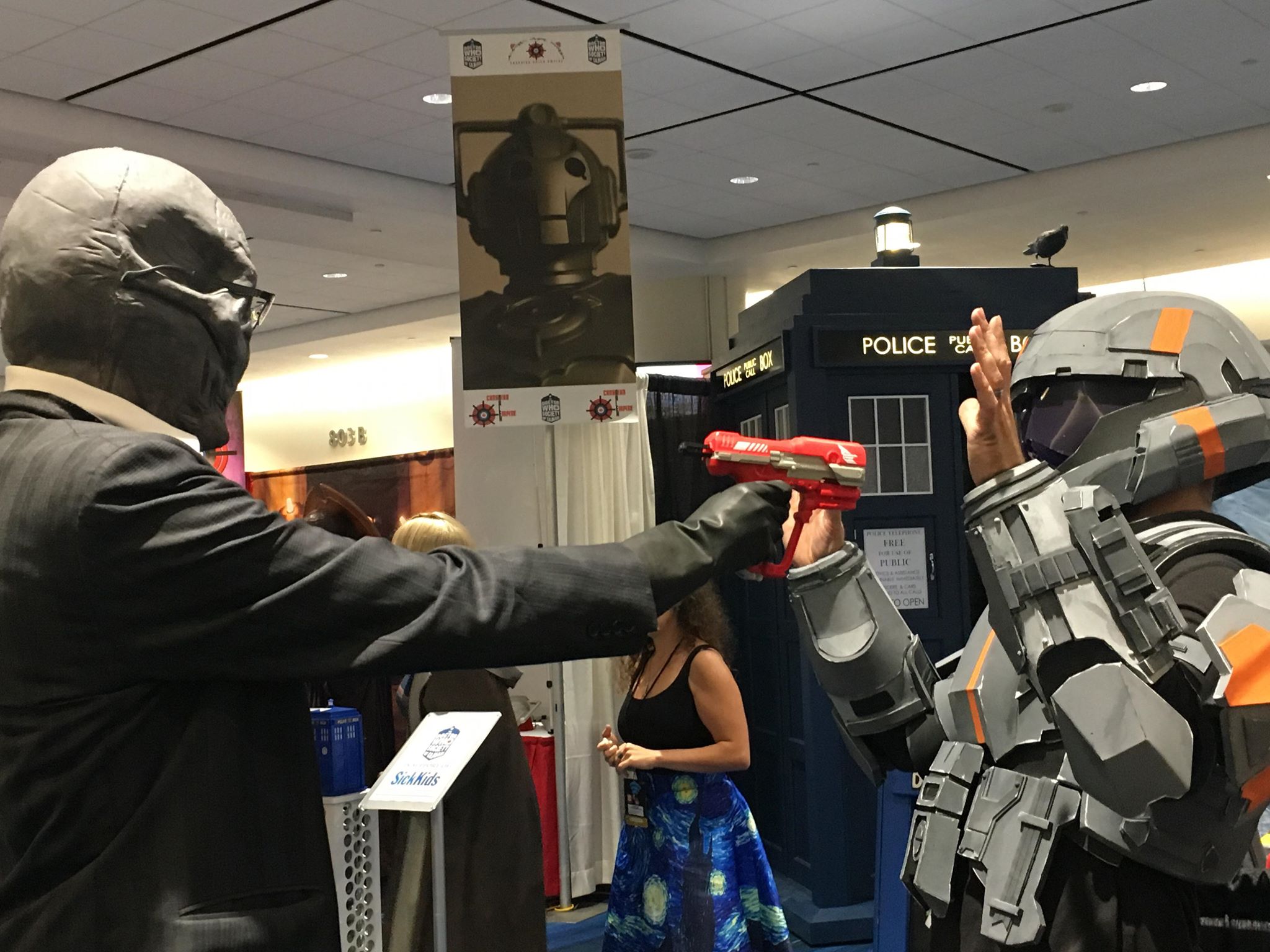 I was hoping to see more Halo cosplays but only a few were seen. I had one guy in a Chief helmet spot me out and I only got pics with one, a DFT'r/N7'r! 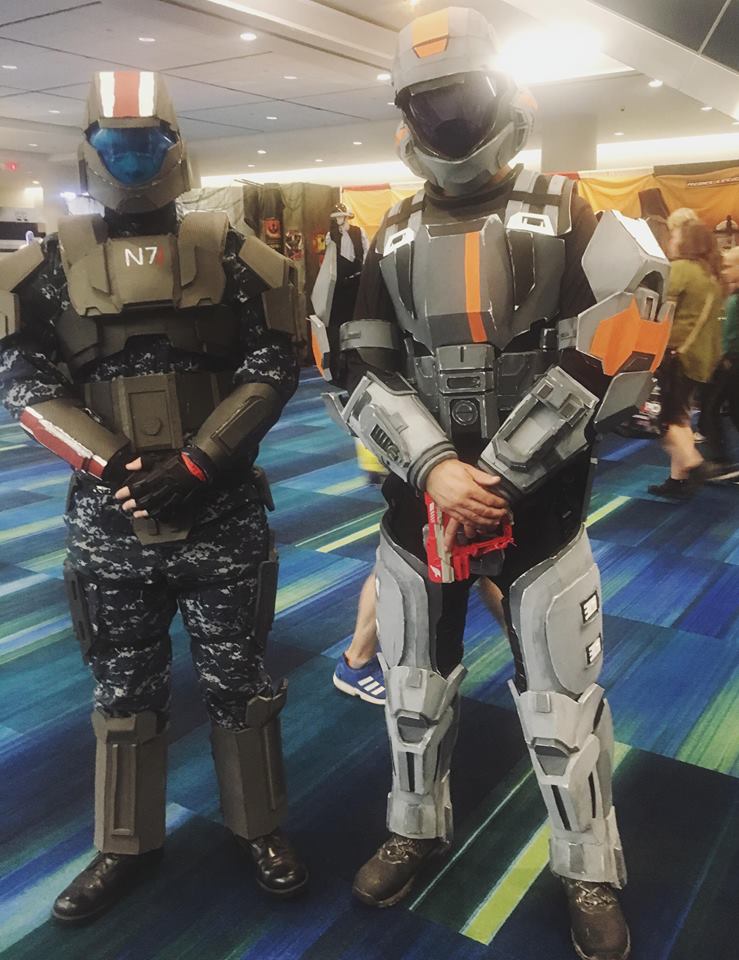 This picture was taken after both my shoulder piece straps had given up on life and broke free from my chest piece so their sitting lower than I wanted them to....

It was an awesome time despite the expected issues with me not using elastic material for my strapping so this is something I'm glad to have worn a full ODST suit to compared to last years convention. Sure, stairs were tough when the escalators broke down but to my surprise my suit handled it all pretty well. The most 'damage' it took was a bit of paint wearing on the shoulder's cuffs due to me not sealing it with a clear coat and some on the upper legs where the knee guards flanges rubbed against it. I also busted my booty plate sitting in a chair at Boston Pizza so I had to go without badonkadonk protection for a while as I headed back to my car.

Oh man did I ever boil.... I wore only a long sleeve shirt and a pair of dress pants (the only black pants I had) but within minutes of entering the center I felt the sweat begin dripping down my back so any areas with A/C or a fan blowing were amazing to me lol. I tried to wear my helmet long term but eventually fogging and heat became an issue

Since I've surpassed a Halo addict in terms of collection I'm always on the look out for Halo stuff at this con but this year was a let down in terms of available items. It was all stuff I couldn't afford ($80 and up for Halo 2 figures in beat up boxes and $60 bucks for kotobukiya armor sets sans main body parts) so this year the only Halo thing I bought was a second Buck POP! figure so I can have one unboxed on my desk.

However....it was not without a total loss. I am sad to announce my TACpad , as visible in the above picture was, somewhere in the crowds bumped off my arm and is now officially MIA. The piece had bowed slightly when primed so the phone I had set it to fit no longer fit in it and the magnets no longer had as strong attachment. :C I'm glad it happened with an empty holster rather than loosing a perfectly good (and slightly old) phone with it. No big deal.

I'm already planning on next years con with upgrades to this suit, mostly in the form of an actual gun, a backpack, boot covers, fans in my helmet so I can wear it longer and a better belt system as my leg pieces kept slipping a few inches which had a pretty significant impact on my walking.

Whats this? A super dust covered out of the blue update post?

Nah its just a poorly categorized list of what I need to do. If you stick around and read all this, awesome. You're informed to the same level I am.

So its been several decades since Toronto's Fan Expo and I dug up my suit as I've been having the itch to get stuff started on it.

Things are in major need of repairing and what not so I'm just gonna fill this post with images and descriptions of whats going to be going on with them.

And my complaints. We can't forget those.

All things given the suit handled the con with ease and stairs even better (despite me looking like C3PO walking up them in some areas to due to poor movement). Below are the most worn parts and sections I'm going to fix up. 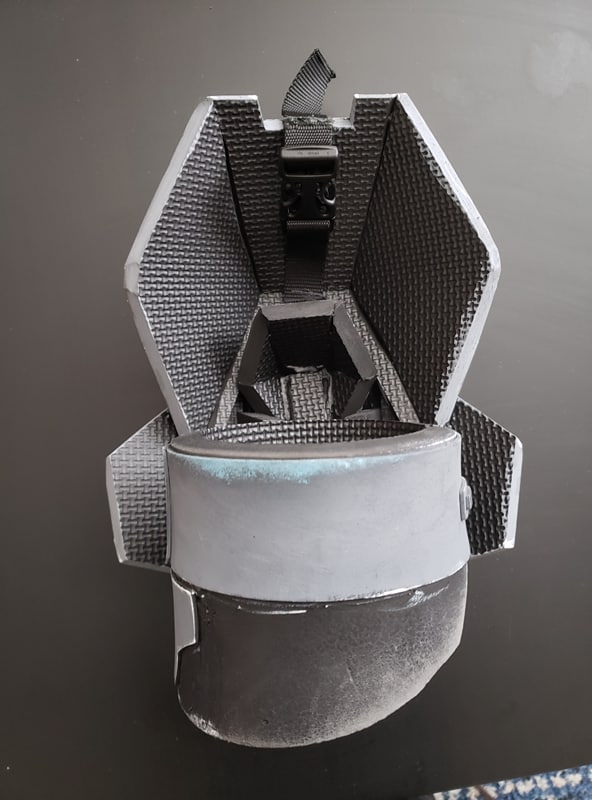 Both upper arms wore in similar spots so that just is going to require just a repaint. Nice.

Not so nice is that I've dun lernt from my poor method of strapping by just attaching the straps with just a dab of hot glue. I'm going to reattach the straps but this time put a piece of foam over them to lock them in so they won't randomly fail (as shown in the Expo pics). 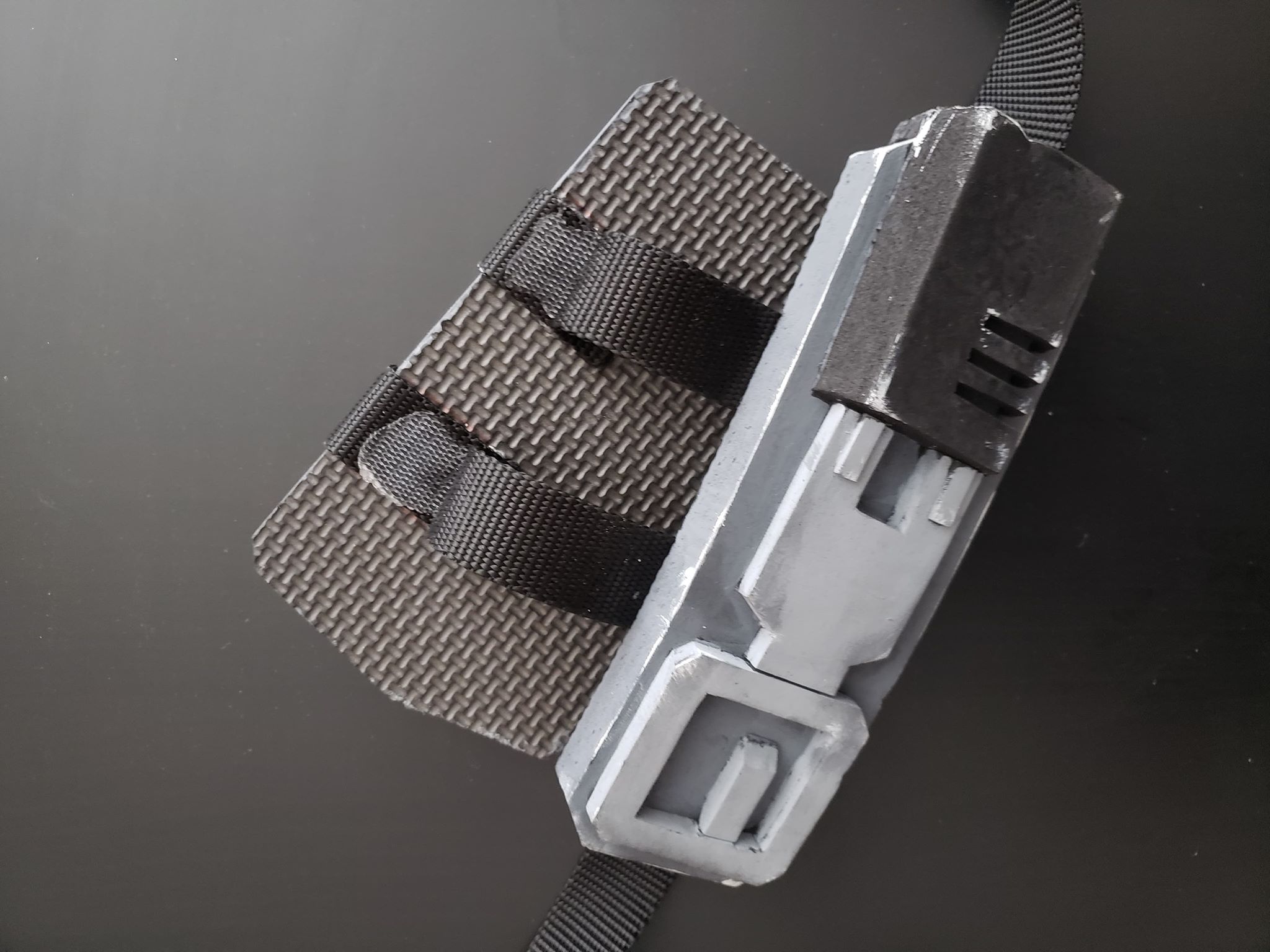 Front belt and crotch plate thingy. Same thing happened to it and the actual jerry rigged belt I hooked up, poor choice of strapping all across the board. From now on I'm going to use an actual belt and figure out a way to have the buckle be hidden. 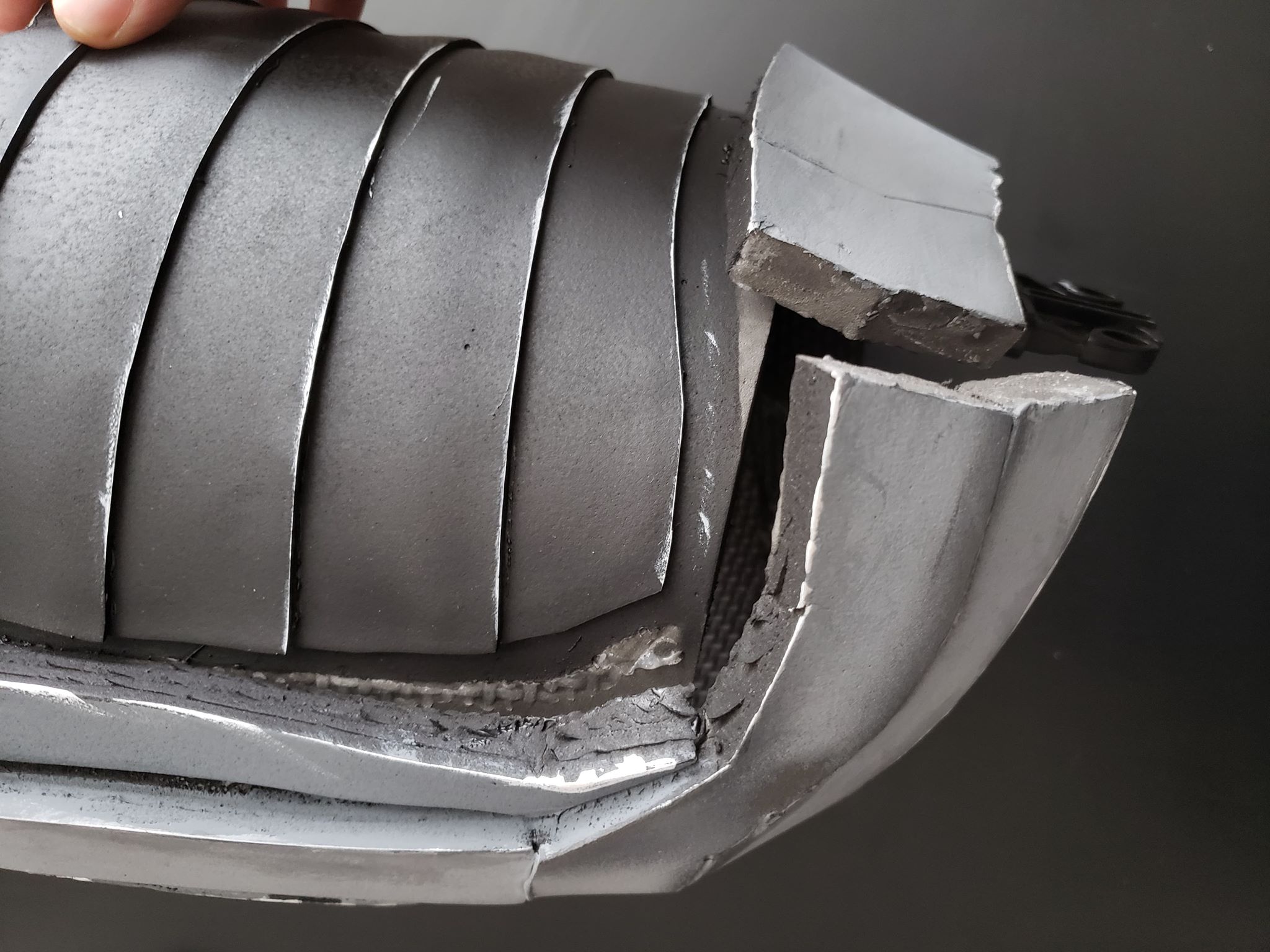 By far my worst area of damage taken. That's what I get for sitting down for pizza and a beer I guess... but its not a big deal as I'm going to remake both thigh sections as I greatly dislike how many pieces it was made up with, so I'm going to try and custom template up a version with 2309572309732 less sections for a much sleeker look.

Areas to be remade:

- Both thighs
- Booty plate
- Helmet (See below)
- Possibly the upper arm pieces due to that ugly thin foam on the orange sections being all ugly and what not.

I like the helmet but since I panic rushed it out so hard it suffered greatly. Areas are all wonky, its warped massively and it just could have be done so much better. 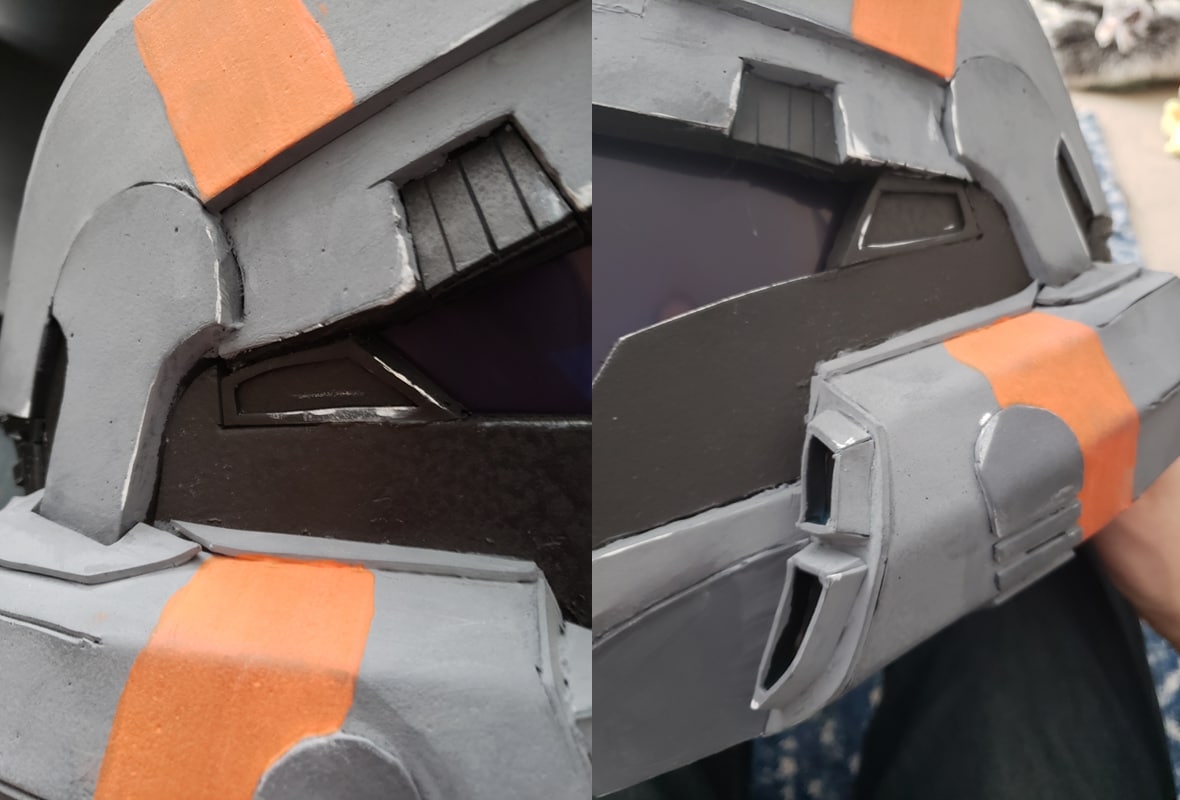 Both side pieces on the visor are mismatched which shows how wonky it is.

The front vents are something I wasn't pleased with and since the spray primer warped them it just looks gross. Parts don't line up and I didn't heat form it one bit. Version two will be more better looking I hope. Plus I'm going to try to wire the next version with small fans so I can wear it longer without having to stomp around with my ugly/sweaty mug out on show.


Bonus shot of my incredibly high quality helmet padding. Bask in its beauty! Vomit bucket is in the corner 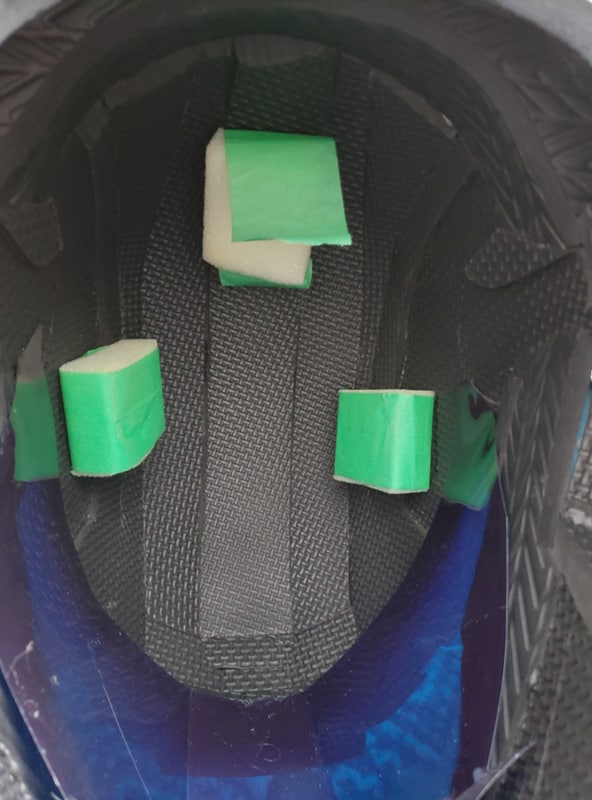 Guns: I need a weapon. Or two. A BoomCo dart gun didn't do me justice at the con for what ODSTs normally rock. Going with Paiganboi's advice and making the SMG and battle rifle a la DFT templates.

Backpack: I'm juggling between having it being just a worn prop vs a functioning piece of equipment for carrying water bottles or small purchases but whatever carry method I have in attaching/wearing it is the deciding factor. Templates have been set up since I first started this project but I ran out of time.

Repaint/re-detailing: A complete head to toe re-priming of the suit is going to be done so I can do a much better paint job. I'm going to add all tons of more details as per the Reach ODST model along with a much nicer weathering job. I'm going to actually stick nameplates and blood type ID tags on it this time around.

Theming: The color scheme and striping is going to stay the same, maybe a bit darker of a grey but I'm going to try my hand at spray painting the orange stripes on rather than hand painting as before as the prior ones didn't look to good to me.

Boot covers and gloves: Gotta keep my extremities as canon as possible.

I lost something close to me that day: My empty TACpad.

RIP in peace TACCY. You will be remembered for your good intentions but poor execution of those intentions. May you provide tactical advice in TACpad heaven.

Since someone didn't like staying attached to my forearm this means I have to remake a new one but this time its going to be permanently fastened to my wrist. I still may use the same method of having an old phone in there but plans may chance as time goes on.

There. That's all I got for now. No actual work, just a ton of words, pictures and a memorial. I hope to post actual progress soon.

Southern Regiment
From experience, may I suggest not using foam to back-up the strapping? I did that with my son's DFT armor at the ab plate and the shoulders. The foam was placed over the strap in hopes that it would keep the webbing from separating from the foam. It failed horribly and just tore under stress. What did work was using a piece of the same webbing to perpendicularly overlay the strap at the stress point and contact cemented down. I went about an inch extra on each side and doubled layered the contact cement. Rock solid reinforcement and the foam will tear before that stress point separates.

On the ODST belt buckle, I did the same thing you are talking about and just used velcro. I used a 1.5" quick release buckle, roughed up the one side and contact cemented velcro to it. Then the same on the backside of the foam buckle piece. It is one of the last pieces to go on and I just slap it right in place.