Crunch time is panic time for me nowadays.

Totally unlike me for a Saturday, I stayed up late last night to finally finish things. All major parts being done (Aside from the helmet) means its only detail time for now.

Upper legs? Complete! I was getting sick of how the thighs were so bowed out without the inner section being added so I had to sacrifice one of my remaining foam sheets to bring them in. That leaves me only 1 sheet left till Friday/Payday to start my helmet... 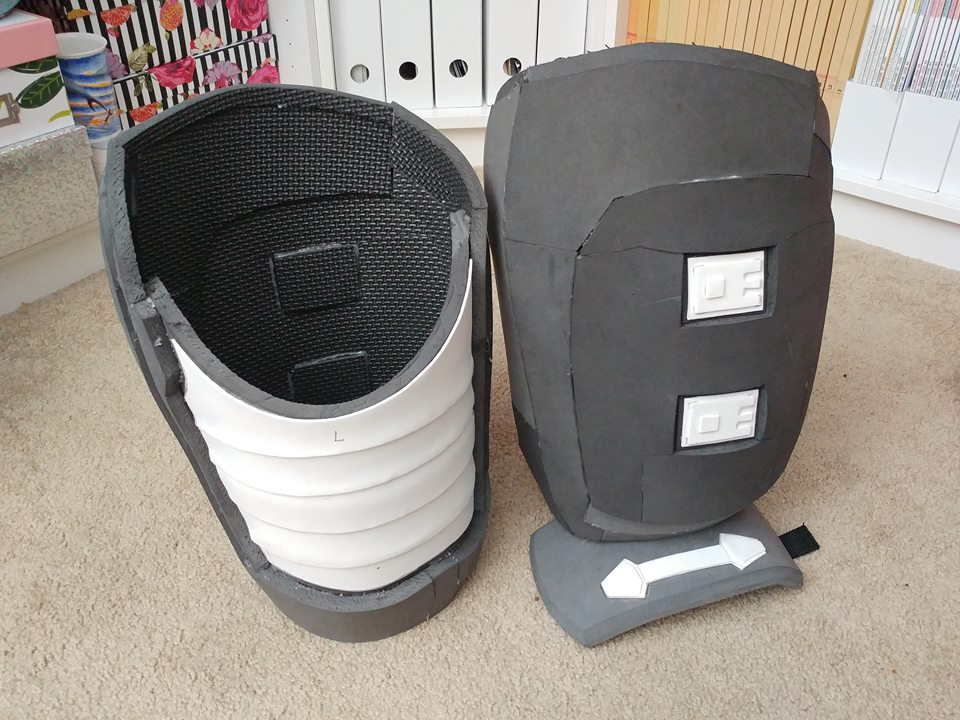 Since that inner section was added they now are formed to how I like it, and sit at a good height when wedged onto my thighs. It took so long to get the craft foam applied as I had to custom make each piece. But its done! And I'm happy with it!

To glam up my armor I hit my local Dollarama and began my long process of bedazzling the edges of each piece. 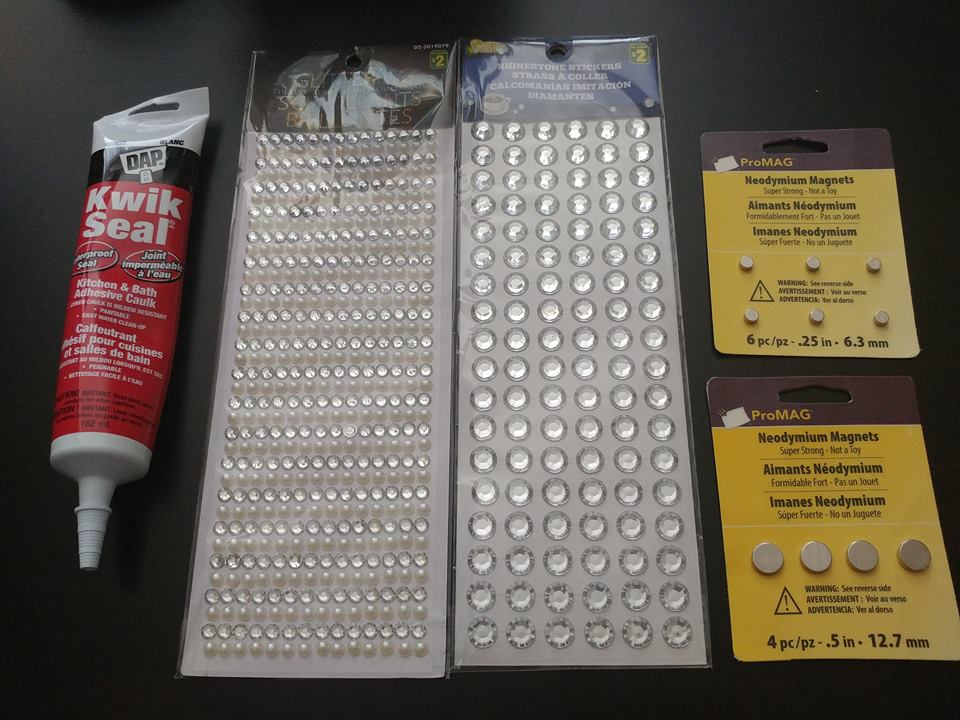 Obviously I'm kidding. Good lord could you imagine how long that would take? I just got the left package for its pearl-like pieces for: 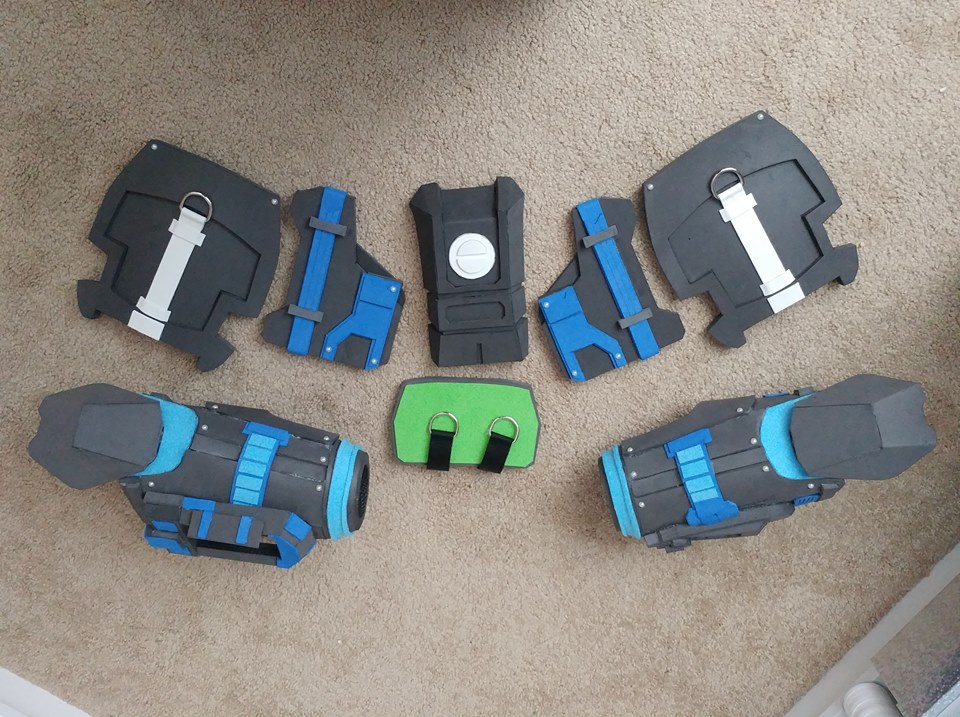 A buttload of 'rivets'! They worked exactly how I needed them to and the adhesive they came with worked better than hot glue. Sweet relief!

I also worked out a way to hide my stupid decision of only 1 strap per side on my chest. 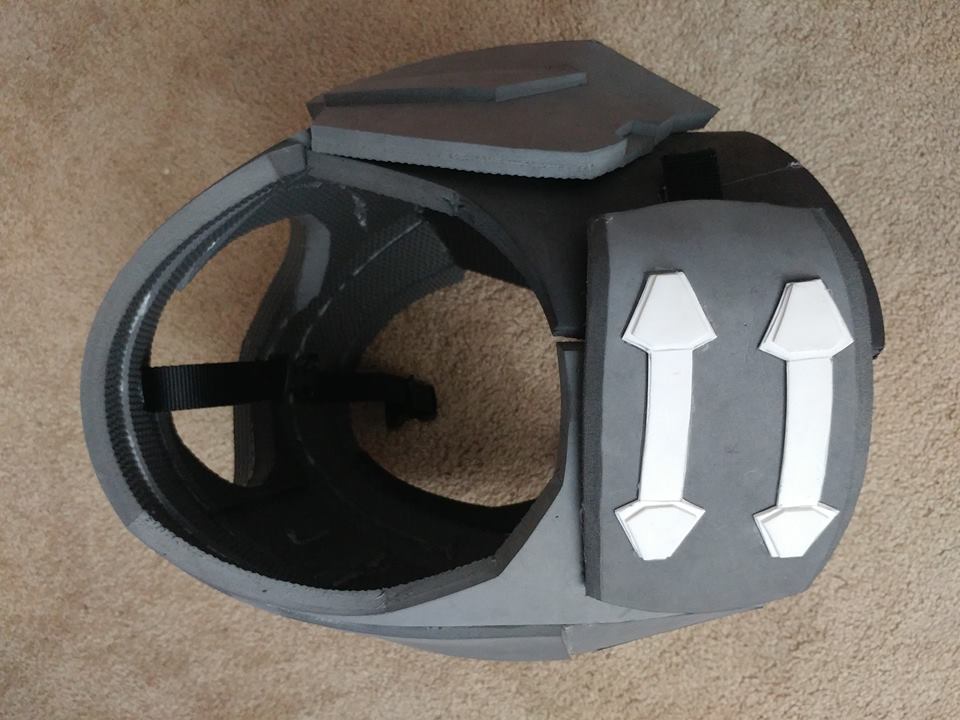 Since the old version of those side parts were two foam pieces thick I luckily peeled off the beveled parts without ripping too much out of the baseplate and glued on newer and thinner replacements. This allows me to sit my arms lower compared to how they were before due to the thickness. It still is a bit awkward but it has to be. I took Dirtdives advice and sat for a while planning this out. I even taped stuff up as a test! 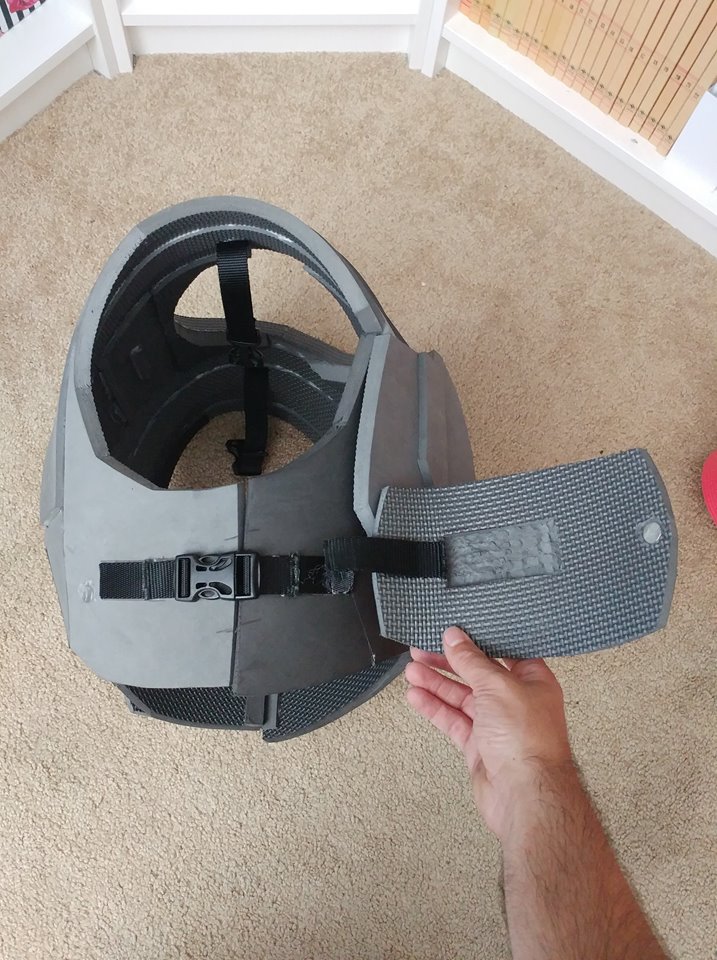 Basically they're are glued on one end by some strapping that acts like a soft hinge. There is a magnet on the other end that draws it over the clasps and hides it well. I channeled out a section where the clasps can nestle into allowing the piece to sit even more flush. You'll notice its not glued in at the moment as....I ran out of glue...oopsies

So I got some more and tonight I'm fastening them in place for real this time! I heat formed one end with a tigher curve to wrap nicely around the chest section.

Gotta get my plans printed for the helmet finally, I have to stop putting it off. Tomorrow is going to be attaching straps and clasps and making a belt to attach the buckle, side plates, crotch and booty plates. Then DAP'n it all. Its coming together!

My current anxiety level is still:

lildeadmangame Nice work! Once you get rolling on this, time flies and you don't want to stop ahaha! At least for me when I work on my stuff I don't want to....some days I want to avoid it, though...

Canadian Regiment
Nice thinking on covering up your strap on the sides. Troopers need to be able to improvise quickly!
Do you have a colour scheme in mind? Closer to game or custom?

Improvising is my middle name! I just improvised that. Man, I'm good at this

I was going to keep it the normal color scheme, but give myself orange stripes on the helmet like Reach's troopers (and how I had it on my DFT one), shoulders and chest. Maybe even on the thighs but I'm not decided on that yet.

I know it’s so much glue lol. My first helmet is almost done. But you’re stuff looks better 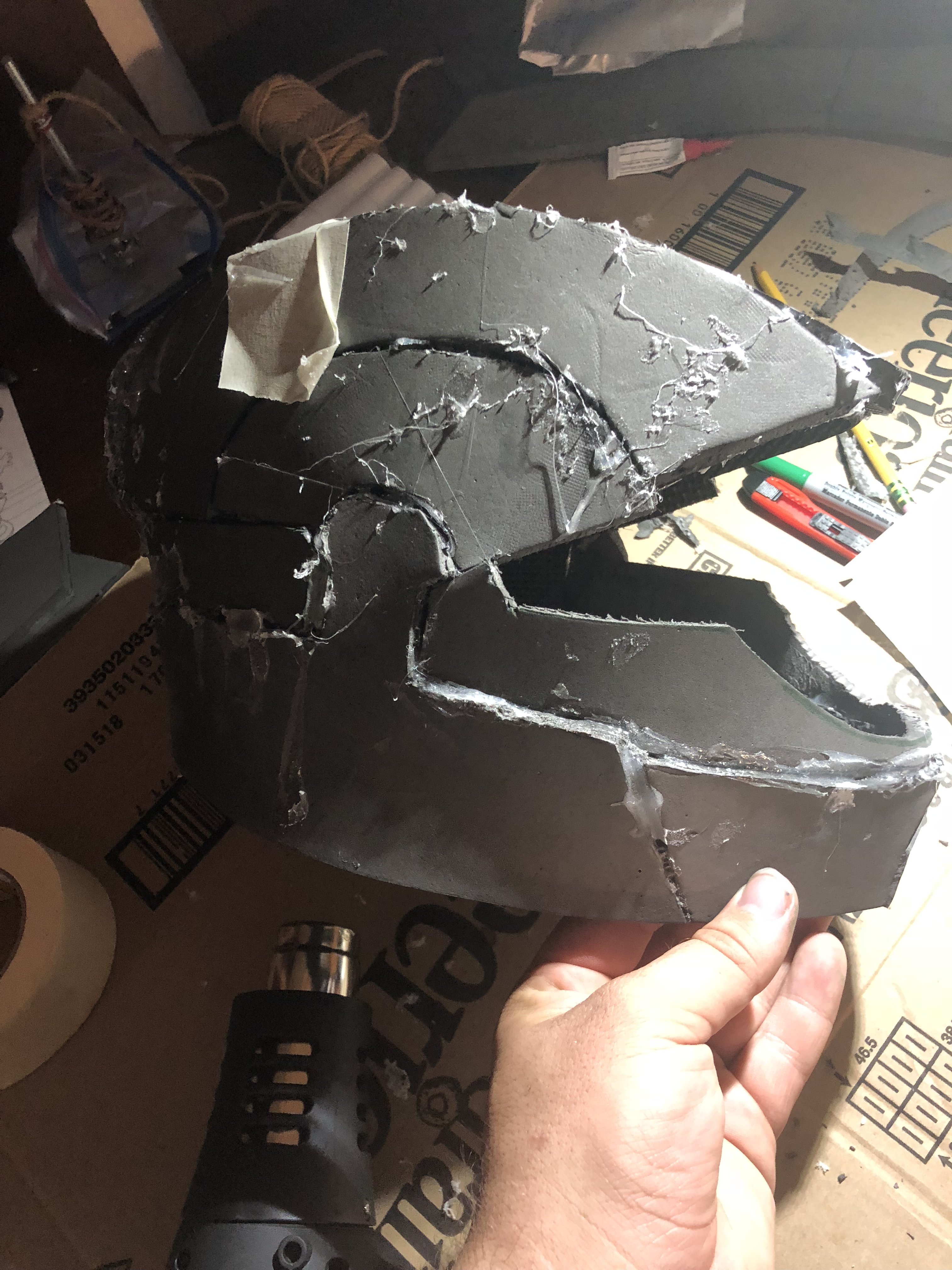 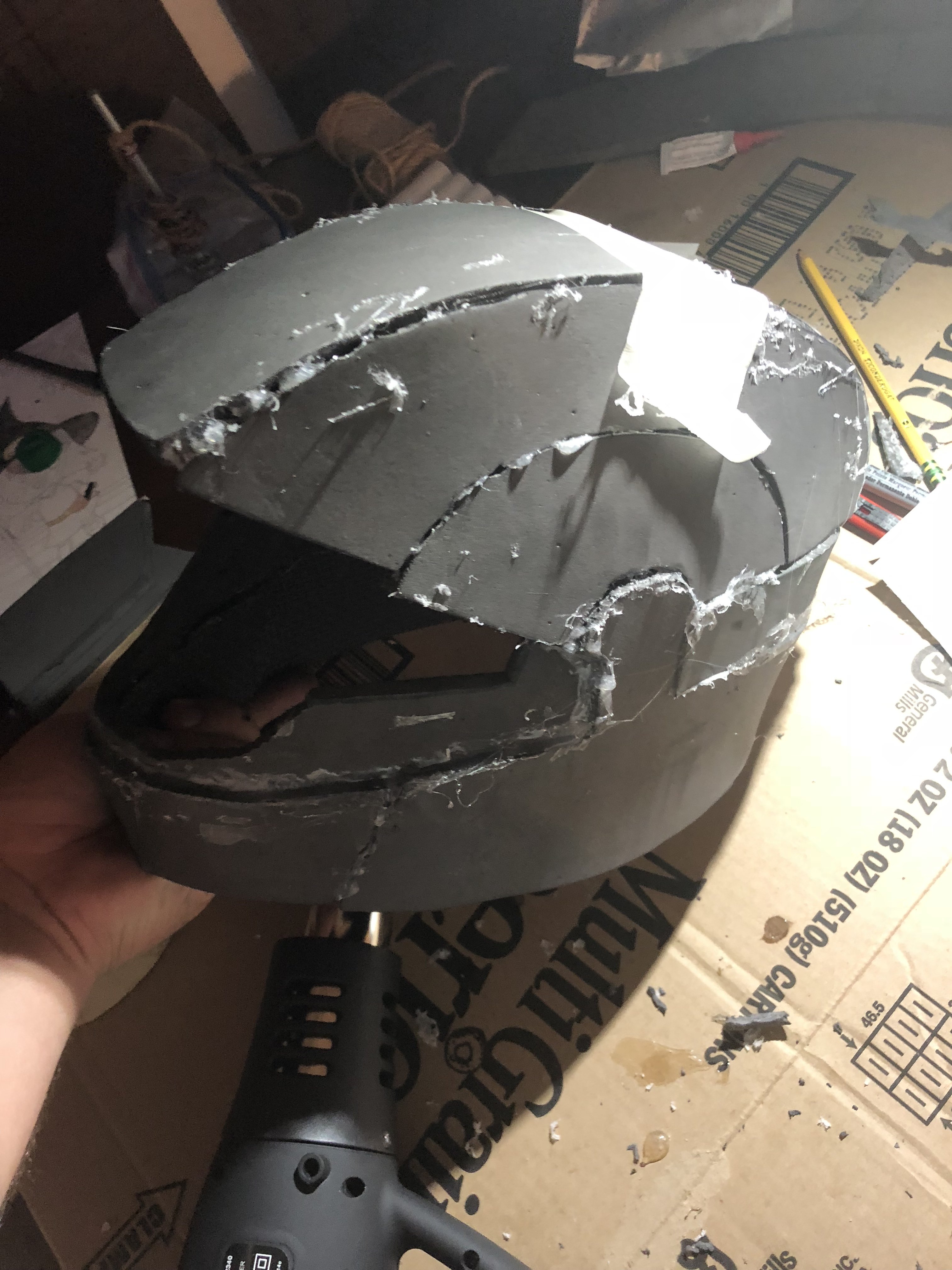 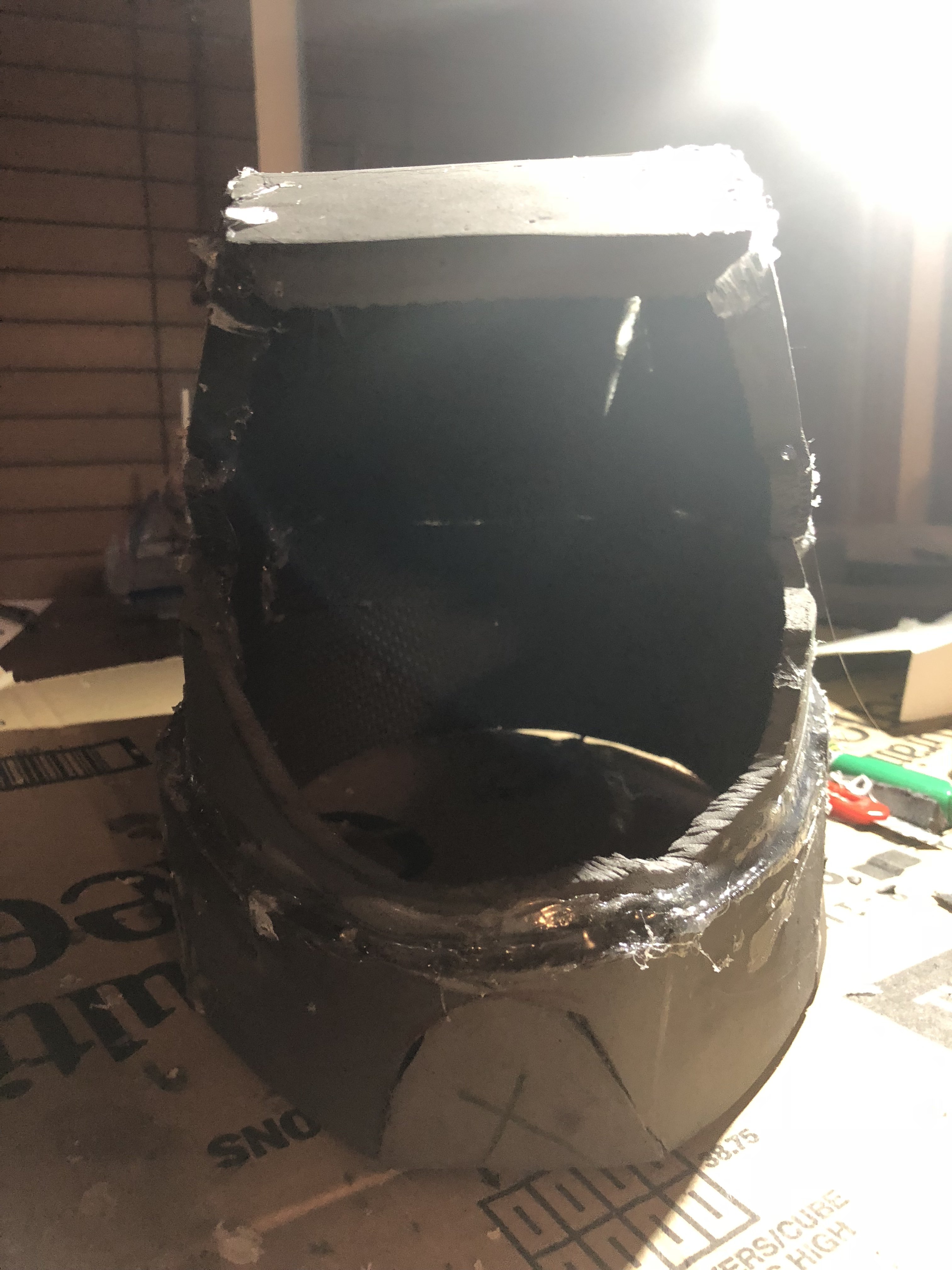 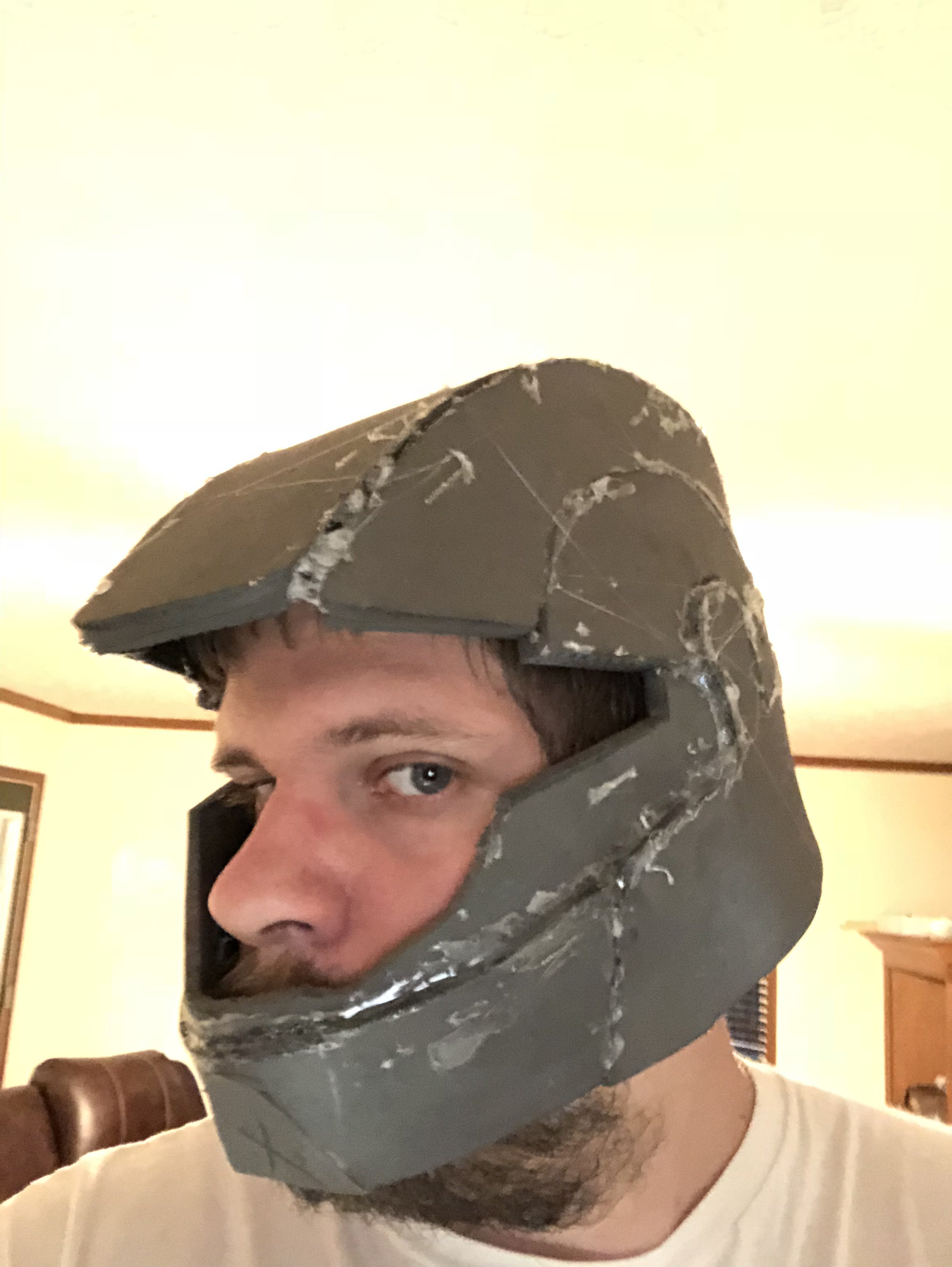 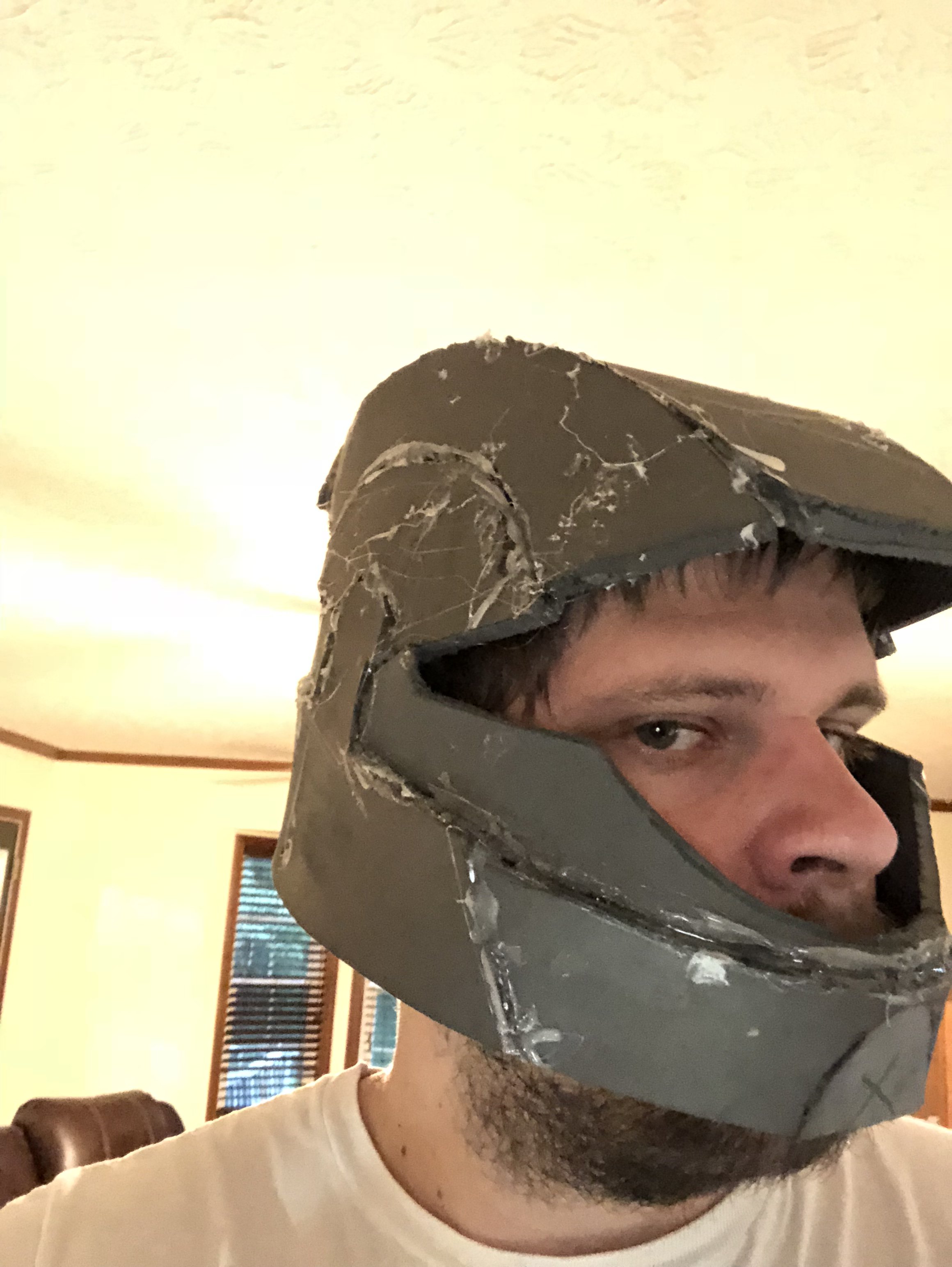 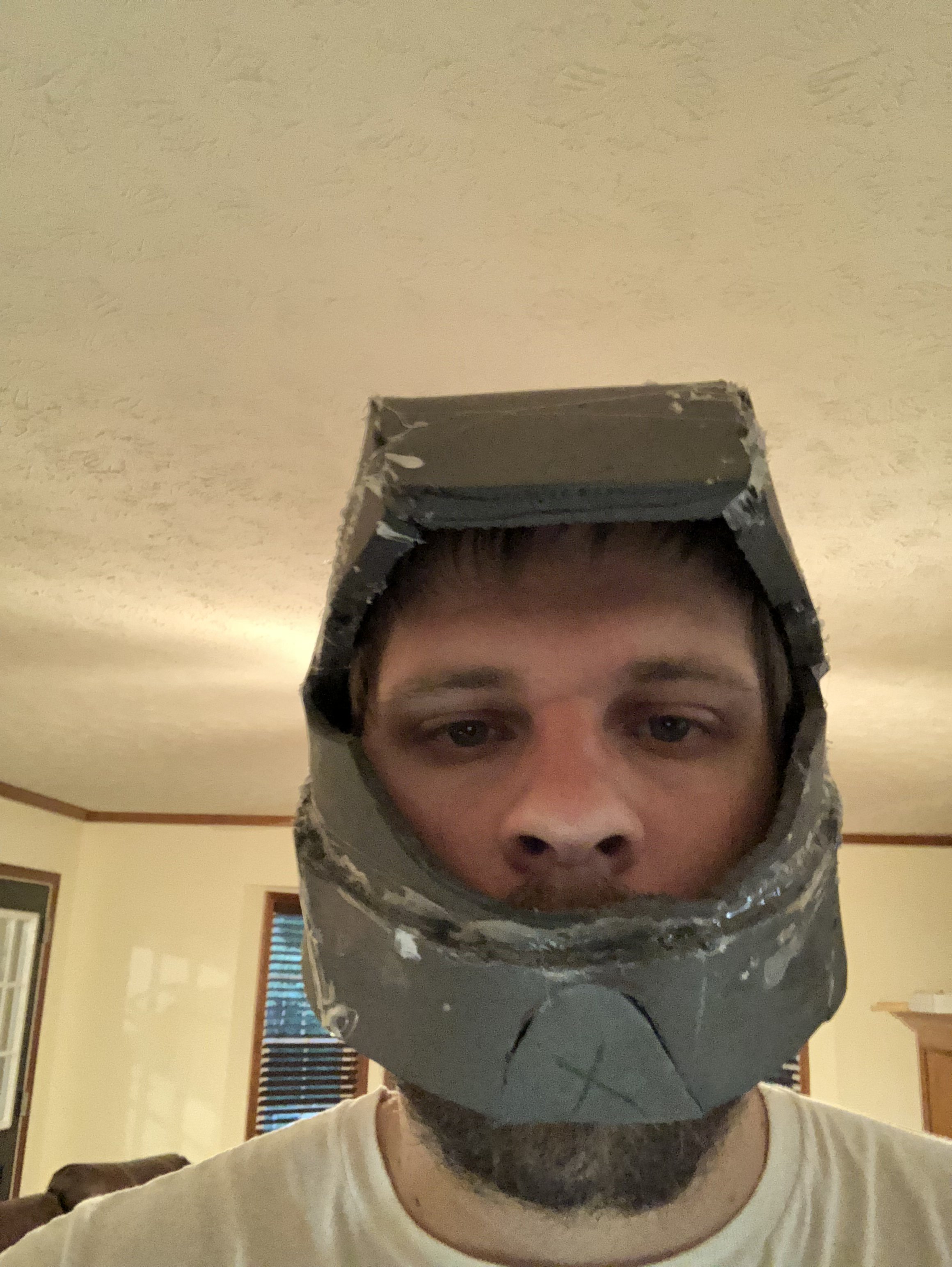 Gluesplosion! Practice makes perfect lol. Do you have a rotary tool? As those things are a literal life saver for beveling.

I also had the same issue with my DFT helmet too with sizing lol
Last edited: Aug 12, 2018

I don’t, need to find one. I use a lighter sand paper and light but of water

I did my DFT without one since it was the first time i worked with foam last year, so my top part doesn't match up as nicely as I wanted it to but with this ODST I'm working on, the tool allows me to bevel edges, smooth cut lines and wreck pieces when I snipe a corner by accident! Hooray!

How much glue are you putting on for each seam? I'm just curious as that's quite a bit of webbing going on. If you can use less it'll definitely save you on using lots of glue sticks in the long run, as the glue holds strong when its set even with a small amount.

Not much, the webbing is when I fill any empty spaces

I did over use in two spots though lol

But I’ll be cleaning it up 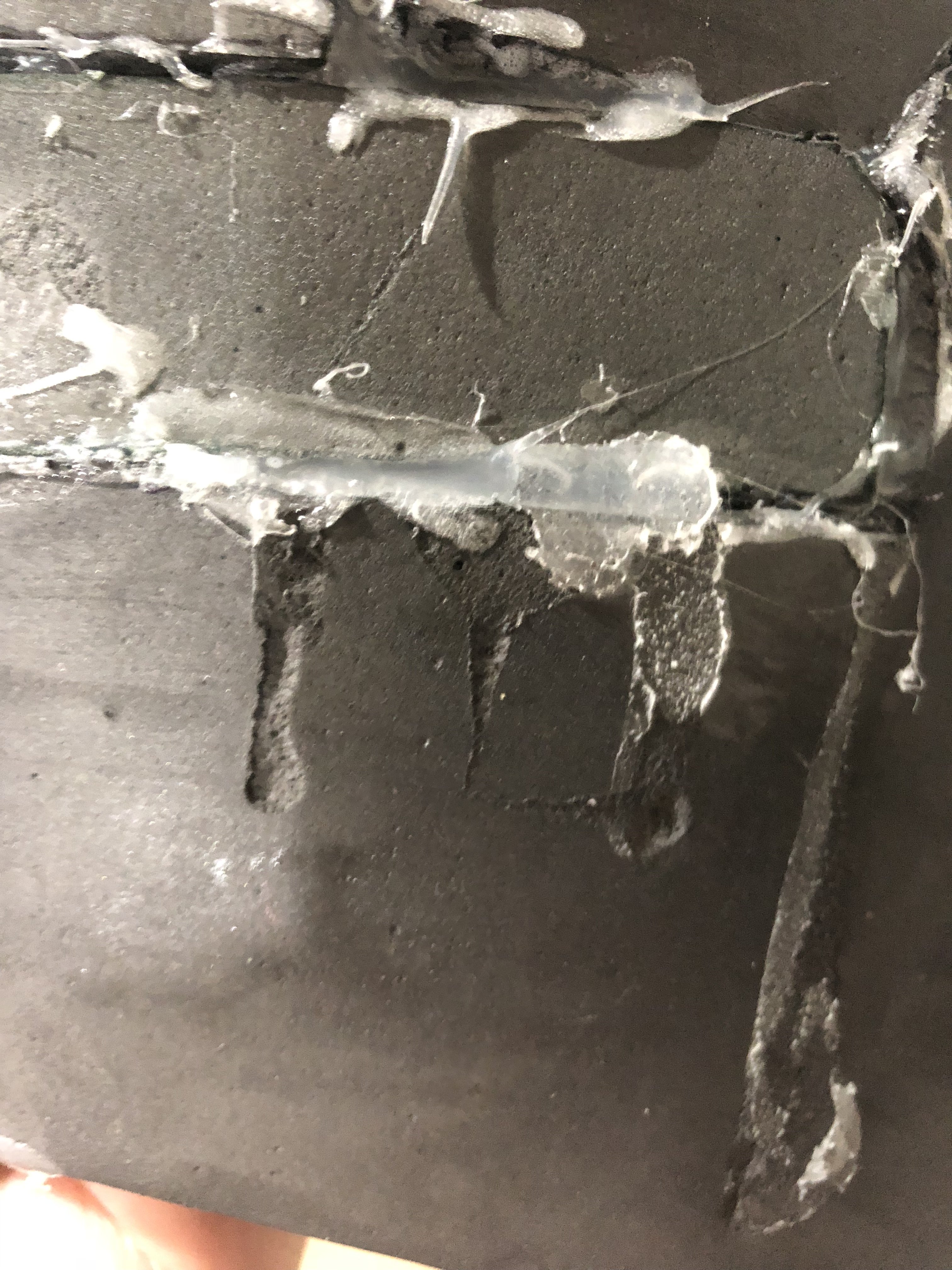 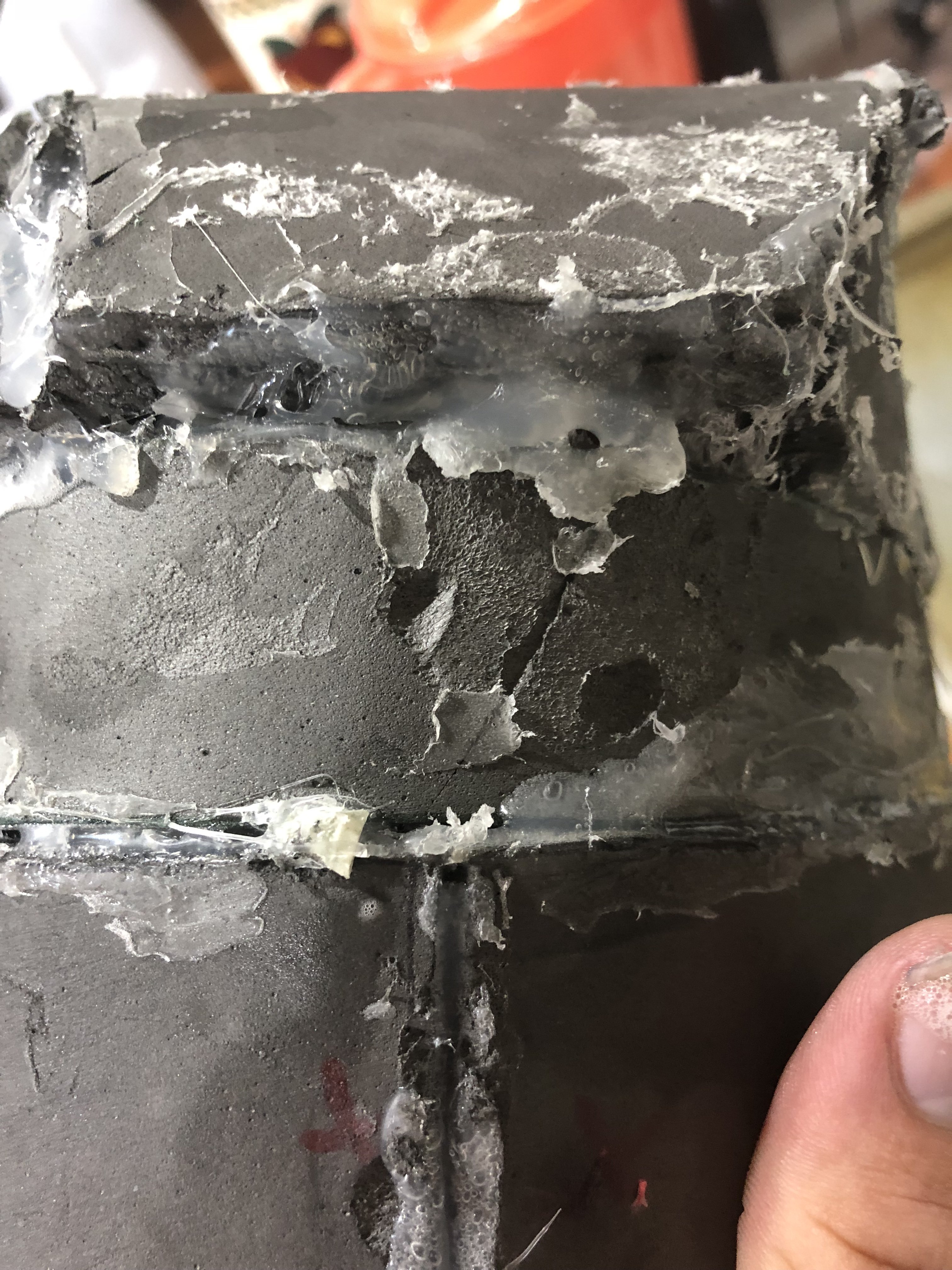 For not having much experience you sure did do a fantastic job!

Small update again...strapping is almost done. And by almost I mean just nearly there as I'm down to about a foot left of strapping and I have to still do my lower legs to hoist them up. And I forgot to buy one extra clasp so I'm down one so I wasn't able to string up the lowers.

Speaking of the lower legs, remember these fancy beveled, folded and such knee guard flanges? 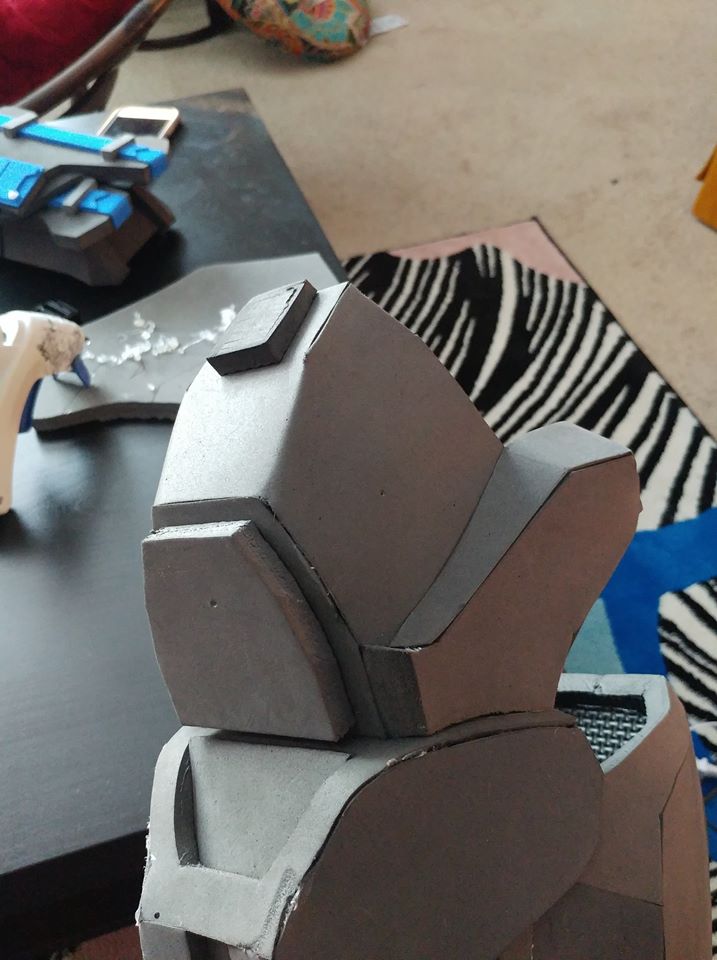 Well those good looks came at the cost of fitting nicely against the thigh pieces. So, I plugged my ears against the perfectionist having a screaming fit at me and ripped them off and replaced them with a single piece: 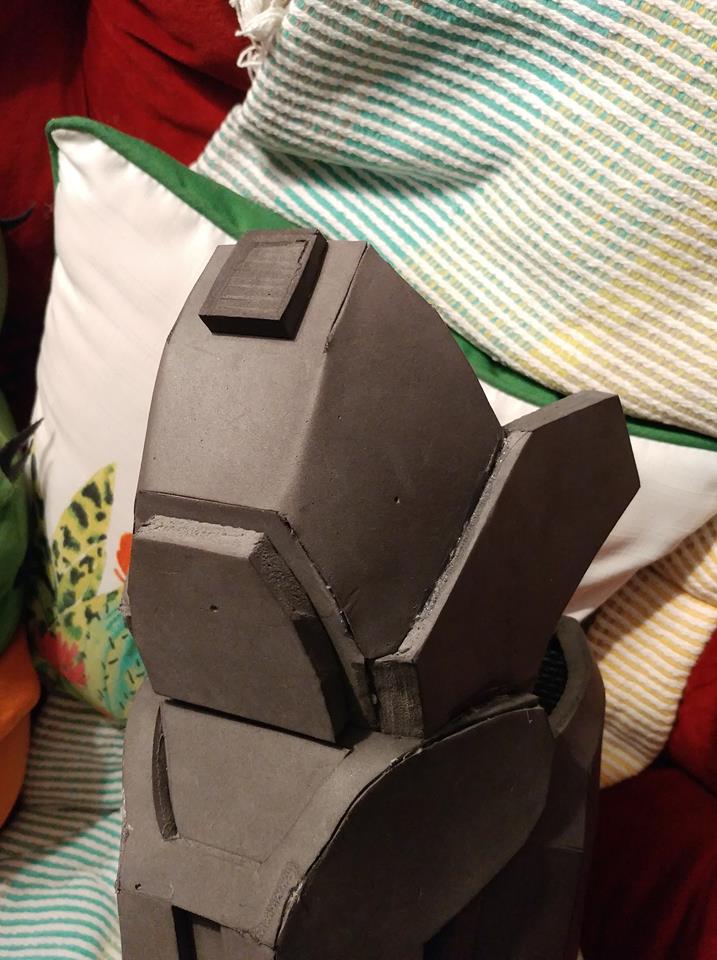 This should let it sit better with the lower parts which it does when everything is seated together but walking is still a little awkward due to the parts rubbing at the back, even more so when the lowers are at their correct height....

Got a small thing to check off

Super cool bat belt sans cool tech? Holy completed tasks, batman! I got it all laid out, strapped up and the 'permanent' parts attached, whilst the clips for hooking up the thighs are in place.

I risked another full power charge to the awkwardness laser banks again and suited up to test everything out, minus the stomach pieces which is the victim of the lack of strapping. 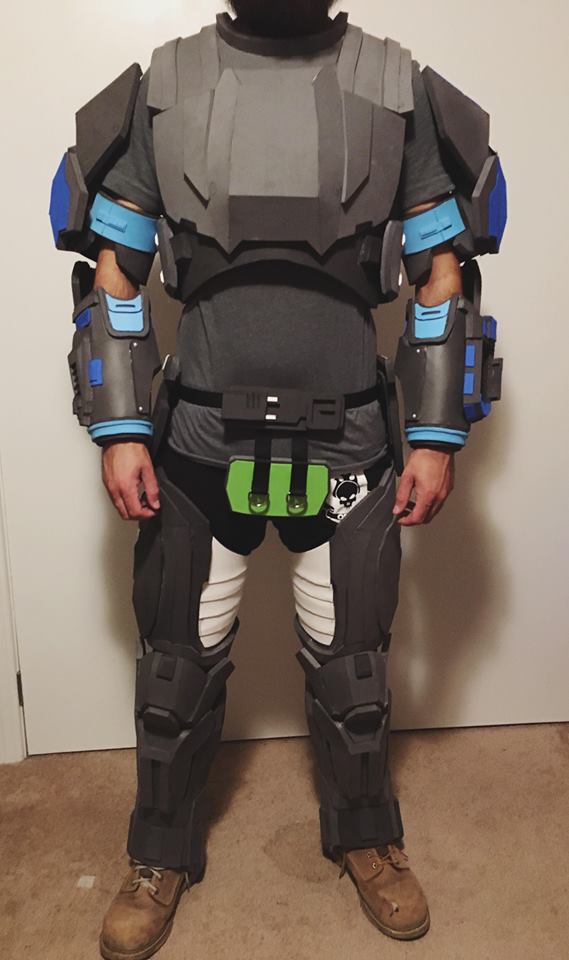 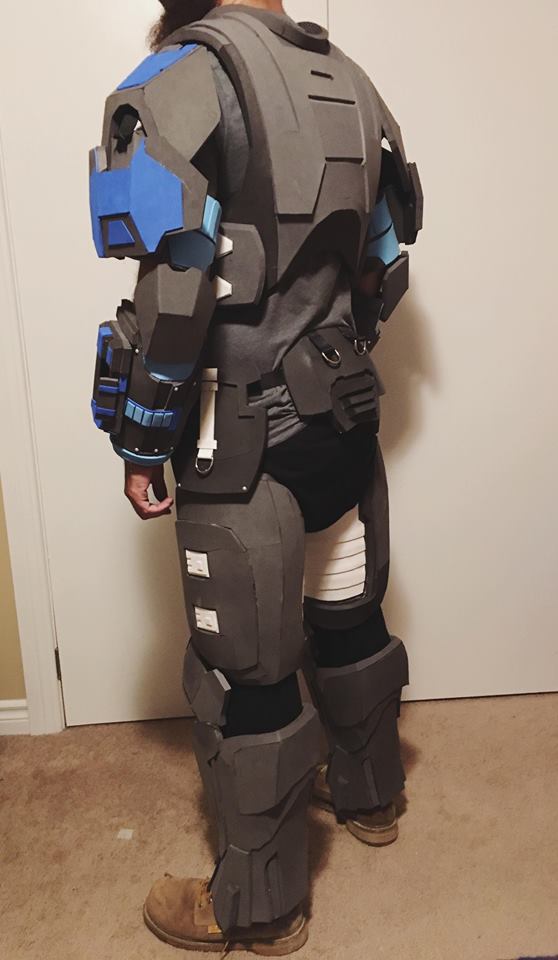 The upper legs are attached by a single strap to the belt, which everything shown is also attached to via loops and stuff. My booty plate's strapping broke off as I did a poor design choice by having the rear facing belt buckle be hidden behind it and only be able to slide open a few inches to one side, but that blew out when I squeezed myself out of it. Hot glue is all it needs, nothing major.

However, as I haven't stuck on the stomach sections it may be tight for the side plate thingies as where they should've gone there is now the glued in bracket/hinge cover for my impromptu strap cover additions.

I'm still not happy nor impressed with how my upper arms sit at rest due to the placement of the cuffs on the shoulders and how they hit the side parts of the chest as it makes me feel like I'm some gymbro strutting around the gym after lifting 15 pound dumbbells for 5 minutes... but none the less I had to get a more up to date image to distract you all from that awful early suit up I posted earlier. And once the stomach is on I hope it'll remove that hourglass shape thats happening with it...thick at the top, meh in the middle and thick in the bottom...

Also. I haven't had relief from this bloody heat in over a month as my apartment doesn't have A/C, my cars A/C is in need of a recharge and my work doesn't A/C the shop so the second I popped everything on I began to die of heat even more. Man this stuff is insulating!

Canadian Regiment
Your suit looks Awsome. I really want to see it with some paint.
I wonder...instead of tearing out the knee flaps and making new 'ears', if you had just trimmed your knee ears down a bit, would it had a better fit?
I sacrificed game accuracy for mobility with my shins. I cut a scallop out the backs so I could walk properly and not like a stiff zombie.
Do you have a set of matching gloves to go with your fancy outfit? I don't recall seeing them in earlier posts.

Had I trimmed them there would've been too many changes in angling, from where it started then to a sharper point at the ends which would have been an issue as it would've cut into the bevelled areas and revealed them (I think... I should check this lol). It luckily wasnt that big of issue removing since some areas were tacked in place as they were my first things I made lol

Did the scallops have that big of a result or was it so-so?

Gloves are another item to get on Friday. Imma hit up a Walmart or a sports store around me and check. I should see if I still have my old airsoft gloves but those may be kinda ....crusty....I sweated alot in them back in the day. I'll have to custom make a top like you did for yours as well. Is it ok if I may use yours as reference as yours came out awesome!

Canadian Regiment
The scallops work pretty well. It's not perfect though. It's good enough that I can walk comfortably. If I had cut any lower there wouldn't be any back part of the shin.
Reference away on the gloves my friend. I made the knuckle parts hexagonal instead of oval but meh... Why can ya do?

Canadian Regiment
I did some digging on photos. I did a quick sketch for the plate on the hand. Actually build is 2mm base and 6mm for the plate parts and 2mm for the 3 stripes going across.

Amazing suit!
I too get in a groove when working on it...all of a sudden it's midnight!

Yesterday at 4:21 AM
Fallen