His and Hers ODST WIP (pic heavy) 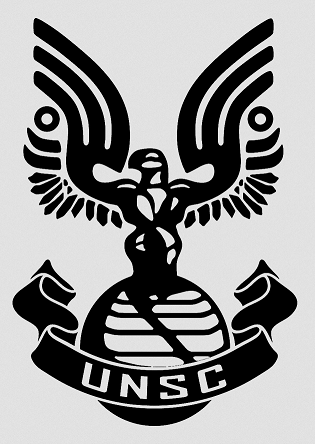 So, it has been quite a while since I first posted a WIP thread for this project. Unfortunately, due to Covenant invasion, everything from that plan had to be scrapped. I barely got out with my life, but my computer went all Cole Protocol. With that said, I am beginning the entire process again. This thread is the planning, WIP, and picture thread of his and hers ODST suits.

First up, is my spouse, who is one tough little lady. One of our friends is a former Marine Infantry combat veteran who is actually scared of her, she has successfully told off an army infantry officer for doing something he shouldn’t have, and has thrown all 6’4”, 225lb me through the air in Martial Arts training without the slightest effort (and we weren’t even practicing that move at the time). However, she loves the idea of big guns. Well, you don’t get much bigger (and still able to walk at her size) than a sniper rifle. Yup, a 5’2” woman is going to be wielding a 4’5” rifle. So, her armor is going the Romeo route with the Sniper Goggles, lack of right shoulder armor, add-on to the left shoulder armor, but sans backpack. I don’t know how she wants her details, but she is looking at purple secondary color over the normal dark gray of the ODST. Oh, and she is going for the rank of Lieutenant (O3).

With that said, I am throwing a rather large twist into my character/armor development. My character is a Spartan-II, pre-MJOLNIR. In issue 3 & 4 of the The Fall of Reach: Boot Camp comics, the Spartans were seen wearing Black Body Suits and modified ODST helmets. Well, I am taking that one step further. John’s team was a light team acting as infiltrators, mine (see the link in my signature for the explanation) is a heavy team, thus the ODST armor.

Because of the style of ODST armor I am going for, mine won’t be colored as it is in the game. Instead, I will be going for the coloring and style of the much bulkier Halo 3 Series 2 figurine and yes, I’m using Hugh Holder’s files for my entire suit. I will be using a reflective orange-gold visor (similar to the one in the comics), and adding detail stripes in white (my character is the Team Leader of Spartan Fireteam White). The name/Spartan Tag “Jason-078” will be on the helmet and top of the chest plate. The left shoulder will include a med-plate and the right shoulder will include the Spartan-II patch symbol. The center of the chest plate will also have a stylized chess Knight in white. Oh, and it will be completely weathered to look tore the frak up, with the rank of Petty Officer, Second Class (E5).

So, the first part of the planning is how it will be built. The short answer is: Very Carefully. The long answer is a little more complex than that, though. It will be built with pepakura, foam, sintra, and cloth.

She is still deciding on which files she wants to use for her armor, but I have already decided on mine. It will be all Hugh’s files. The helmet will include a pair of fans in the cheeks just behind the vents and the temples cut out for ventilation. There will also be a voice amp in the chest armor (with throat mic). Finally, the visor will be made using Hugh Holder’s Tutorial: ODST Visors (and other useful info) with THESE gold window tinting.

The “hard” armor pieces will all be typical pepakura. It will be hardened with EpoxAmite 101 (two thin layers painted inside and out), “slushed” with the Ure-Fil 11 added (making it nearly identical to rondo), and then given two layers of fiberglass cloth cloth on the inside (using the EpoxAmite resin). I plan to detail it in a similar manner to the Cereal Kill3r videos. Rather than using bondo, though, I plan to use Free Form® AIR Lightweight Epoxy Putty. This can also be thinned with water to use in place of the glazing putty. I am doing this because it is too cold to work outside and I don’t want to kill myself, my wife, or the cats inside with toxic fumes.

The shoulder straps, back armor/vest, insides of the thighs, and biceps, will be made of EVA foam. It will be heat-sealed, coated with PVA glue, and then hardened with Smooth Cast 65D. It will then be painting and weathered appropriately. The only thing I am not planning on using from the files is the belt base. However, I will be using the spine armor from that and permanently attaching it to the vest.

The strapping will be military-grade nylon straps and the belt buckles will be made with layered sintra/pvc foamboard (six 1mm thick sheets). The pouches and such will created with other methods, but we haven’t decided which yet (either leather, thin EVA foam that is sealed and plasti-dipped, or pepakura), though the pouches will actually be usable. Oh, and the D-rings will be purchased from the hardware store, as well as the side-release and center-release buckles.

My undersuit will be a little more complex than the typical as it will actually be a Black Body Suit (my payment for making her armor) from the Boot Camp comics. It will be mostly made out of navy blue spandex quilted over a series of foam pads (for the various plate shapes). The neck, shoulders, elbows, and knees will be made with flat black spandex and a thicker padding in strips. It will have the stylized “078” painted across the chest. The gloves will be black and have the padded strips across the back (as seen on the action figure) and the boots will be standard jungle boots.

Finally, my weapons will include a combat knife on the left shoulder strap, Assault Rifle, Magnum, and a pair of frag grenades. All of the items will be sliced at 1mm for maximum detail and have magnets for attaching to the armor. Her weapons will be a calf-strapped combat knife, her Sniper Rifle, and a suppressed Magnum made in the same way.
Last edited: Mar 31, 2017

That is a tall laundry list of a build.......I eagerly await the commencements of this build.....and I'm sorry about the computer wipe......Dam Covies!!!!

Pacific Regiment
Here is the commencement. Six out of thirty-one pages down. As you can see in the last picture (inside view), Most of it is glued together. I haven't glued the final two parts on yet because I'm waiting to do the forehead so it all lines up. 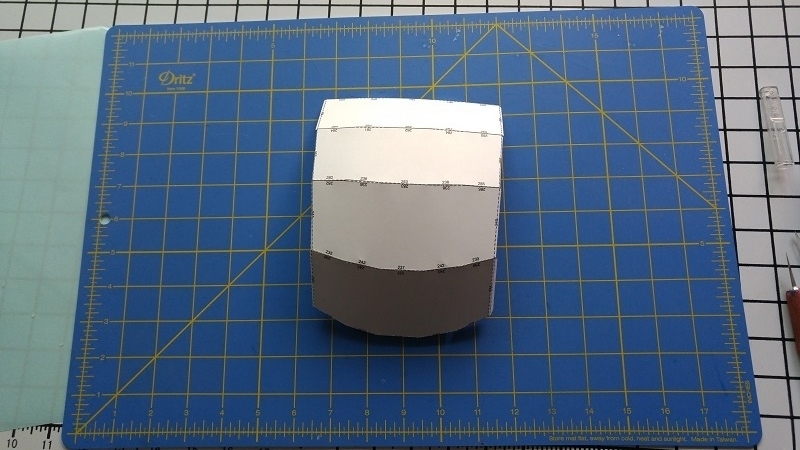 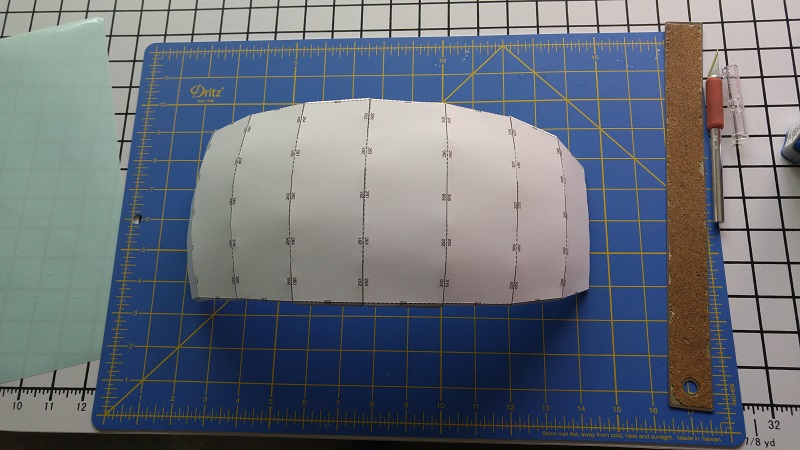 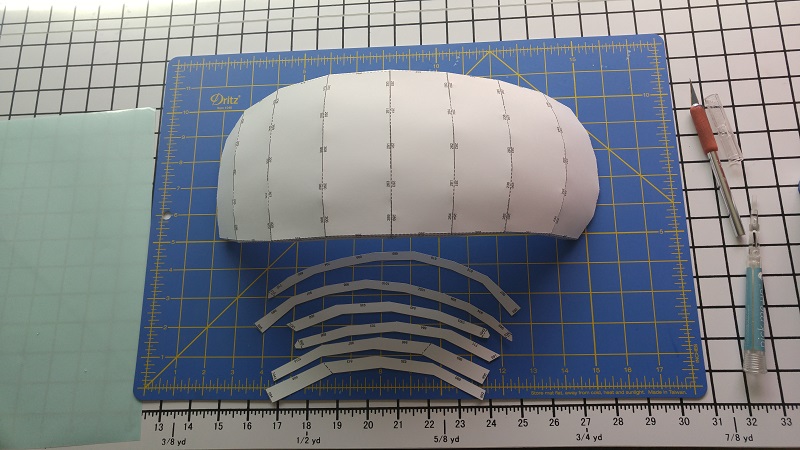 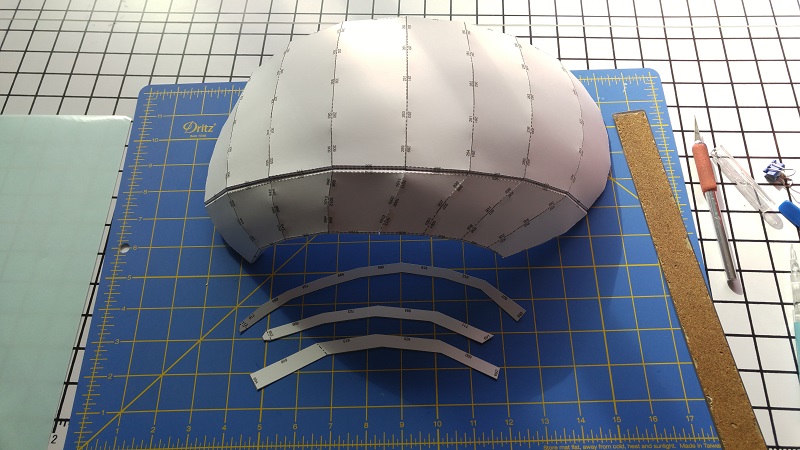 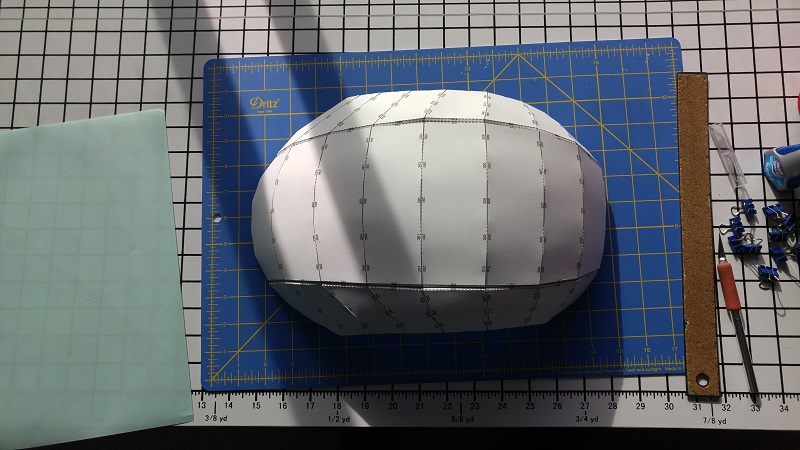 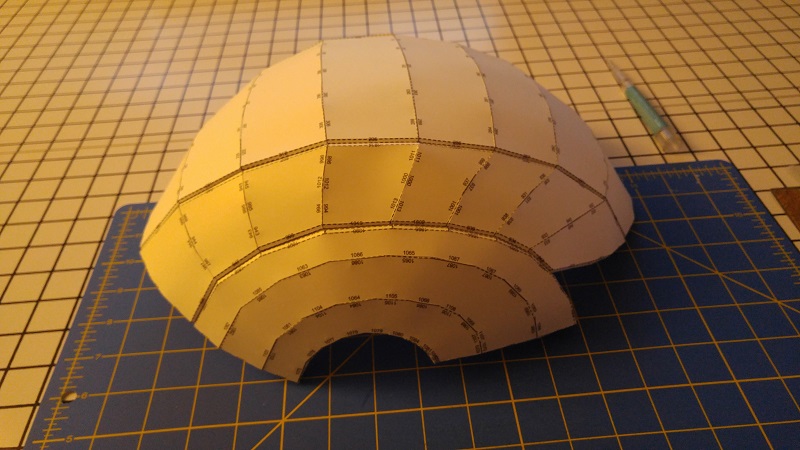 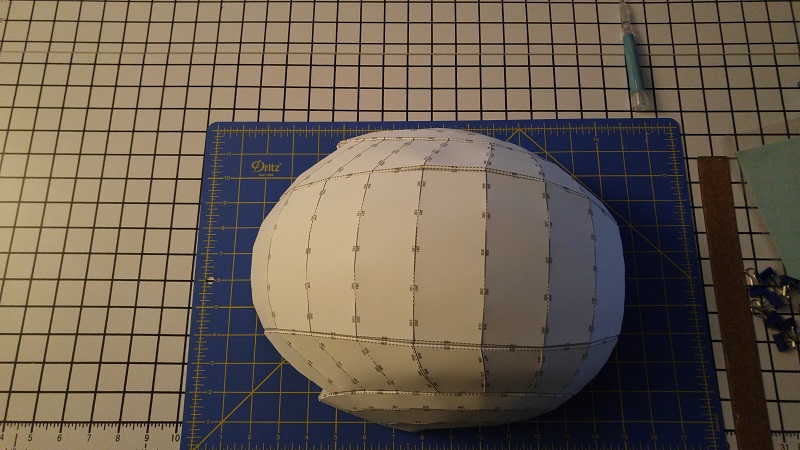 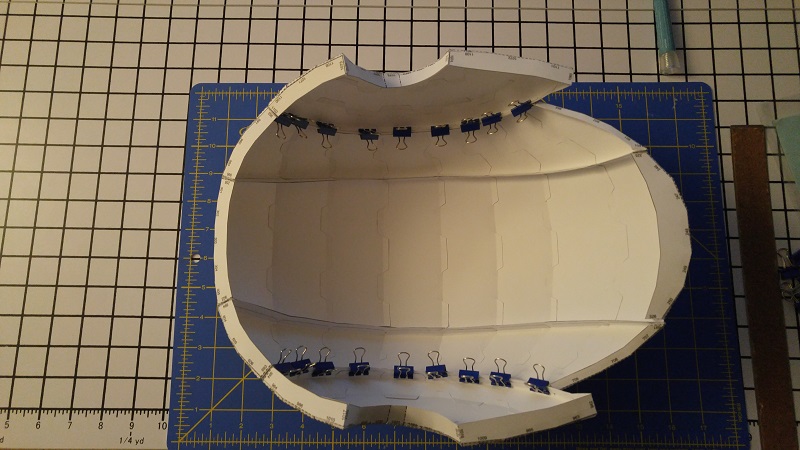 Pacific Regiment
Washington
Nice work on the helmet so far man, it looks quite Noice.
Just make sure you get the scaling right the first time unlike our dear friend Dirtdives and his helmet building adventure

Thom A293 said:
Just make sure you get the scaling right the first time
Click to expand...

My grape measures 10.5" from the base of my chin to the top of my crown. Adding an inch to it for build girth gives me 11.5" or 292mm. That's what it's scaled to. I already went through the difficulty of an overly-scaled helmet when I accidentally made a FUD helmet at 13.5" a couple years ago.

Pacific Regiment
So much for a quick helmet project. I downloaded the newest version of Pepakura Viewer for Silhouette. It's the Version 4. Now, I can no longer use it to cut with my Silhouette Cameo. In other words, I can no longer do anything with pepakura. Not only does this mean no helmet, if it isn't fixed within the next month, it means I'm going to have to refund all of my orders...

Mountain Regiment
Pepakura Viewer for Silhouette is....how to put it nicely....junk. If you've got a Cameo then you've got Silhouette Studio. All you need to do is export your sized unfolds to multi-file DXF and then drag each exported file onto a Silhouette page, optionally clean up the zero-length vectors exported by Pepakura, and then start cutting. You don't need the viewer - it doesn't work well anyway.

(The video is a little lengthy because it includes Pepakura software comparisons, overview of Pepakura Designer, and extra steps for Edge IDs that can be omitted if comfortable pepping without them. I've streamlined my workflow to where I can go from unfolded model to scored and cut parts in a matter of minutes.)

Pacific Regiment
I've downloaded the previous Designer and Silhouette versions and can do it. If I've opened the file in Designer 4, then it won't print in Silhouette View 3. I've figured out a way around it, though. I have to open the file in Designer 4, export it as .obj, and then I can open it in Designer 3 without a problem. I have to re-unfold the file, but it isn't so bad. I often re-unfold files to find better ways to put them together as a way to relax.

With that said, I will be looking into the new way of doing it, RobotChicken. I've been doing it with the Silhouette Viewer for so long that it's second nature for me to use it. I've even figured out how to do it perfect every time. I've closed down my storefront over this, but I'll keep it closed to learn the new method and try it out (and because I need a break).

Mountain Regiment
I have no experience with Designer 4 because it's not compatible with XP and I have no plans to update the machine, but I would expect you can still export in DXF format which is directly compatible with Silhouette Studio (not Viewer), and Studio comes free with the Cameo (you can also download free updates from their web site). (You don't need the for-purchase version of Studio, the free version does everything you need for Pepakura.) You can do SO much more with Studio than Viewer. Unfortunately my video doesn't show the most efficient workflow and I've learned a lot of shortcuts and optimizations since making it. Just pm me if you have questions. Personally, I'd never recommend Viewer for pepping.
Last edited: Apr 7, 2017