I live in North West UK

Current Job:
I'm a Senior Concept artist working in the Games industry. In my Spare time when I get any I love to sculpt and work on various film props. I've got several costumes and I'm a long standing member of the 501st (UK Garrison) My Boardname there is STEVE0671 . You can see a little more about me over on my site here www.stevehird.com

The next big thing for me to get working on is of course some Halo armour. I've started reading the threads and newbie area and lists and I'm currently looking through all that and reading the rules so I'll take all that on board and then I'll see where to start. Looking forward to seeing more pics of peoples progress and armour, what I've seen so far is pretty amazing!

Well that's a little about me for now.

Look forward to gettin to know my way around this place.
M

Favourite Hobby: Geocaching, Youtube, reading, playing my instruments, and, of course, going on the cool forums at 405th

Favourite Halo: All to cool to pick one out from the rest.

Favourite finisher: Huh, whats that? If it is something to do with WWE, don't know anything about it. Terrible program.....

I have been using the site for a while now but it's nice to have an account.

I have resently finished my first steel armor suit but i hope to make more in futher, IRONMAN and COG armors will definatly be down the pipeline!!!

I got the helmet, upper arms and chest armor pepped and glued together. The chest doesnt fit because I have large traps..so i have to remake the damn thing! Then I made the upper arms too big so I have to make smaller ones. Whoever made that scaling thread forgot to mention that you might be a different size for each body part! BONG!

Hi guys, my name is James from London, UK.

My current project is actually building Iron Man armour from scratch by doing sculpts in Klean Klay, moulding them, and casting the pieces is Jesmonite - which is a bit like Aqua Resin but available in the UK. Hopefully I will have some good input on materials and costumes here.

You can check out my Iron Man armour on my website: http://www.xrobots.co.uk/ironmancostume/

Here are a few highlights of the costume so far: 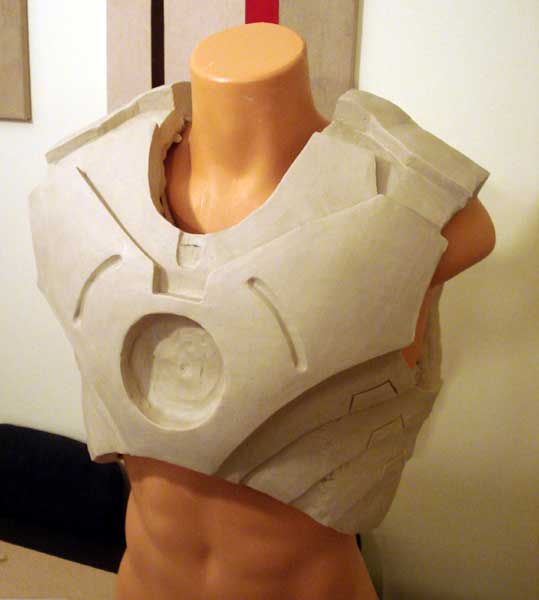 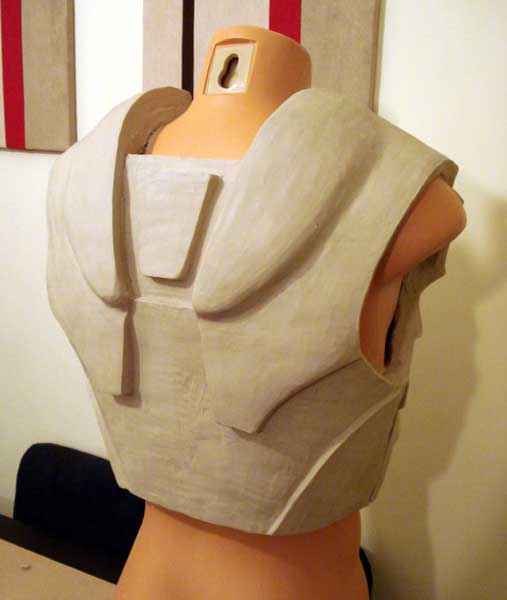 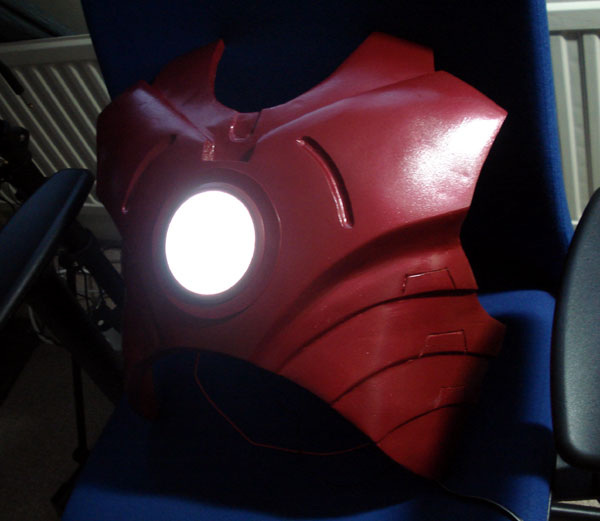 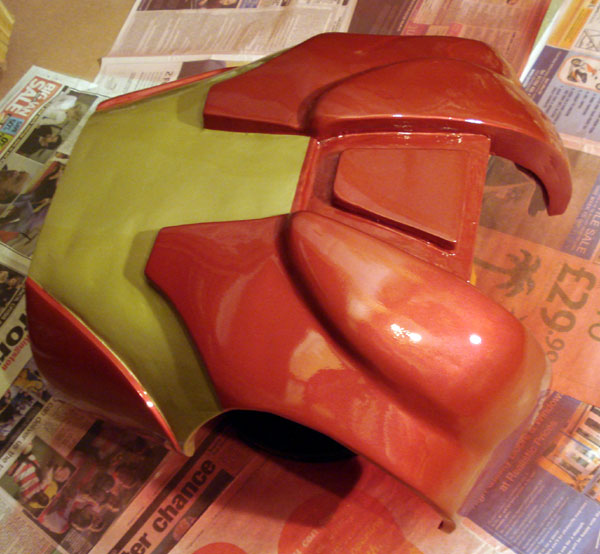 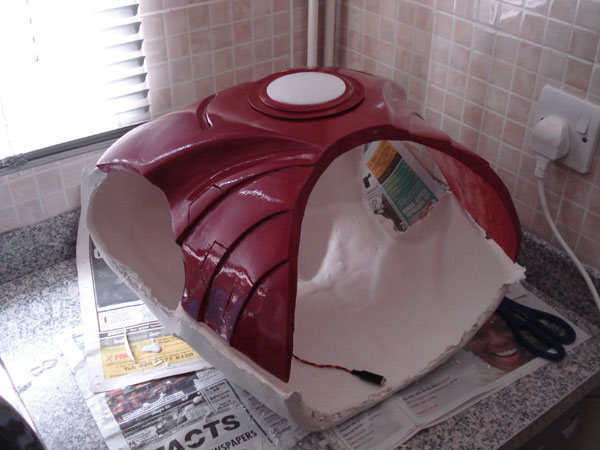 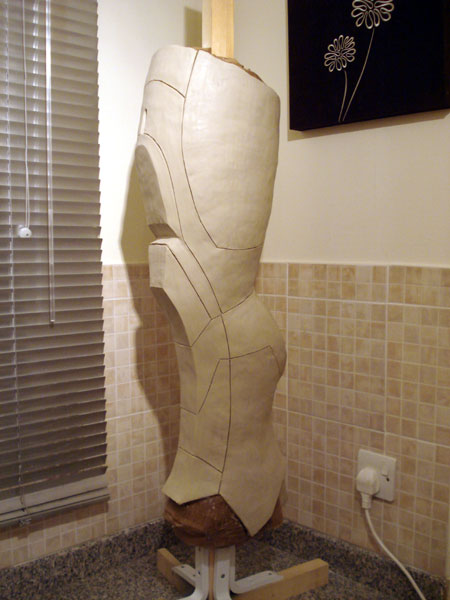 While I do not have any pretentions of being one of the best Halo costume makers, I think that I can claim to be one of the earliest. I first got into Halo costuming in 2003. A local anime convention was coming up, and knowning a few Bungie employees to be anime fans (Robert and Lorraine McLees, whom I encountered before in a Bungie panel,) I knew that they would be showing up. So, in keeping with the spirit of anime conventions, I fixed together a crude costume of a Halo marine, along with a prop Halo MA5B assault rifle. The costume was recieved positively, especially the rifle (Robert was the one who designed the weapons for the Halo games) and I decided to wear it to the E3 2003 Bungie Fanfest at the LA Convention Center. With over two-hundred fans there and a lot of Bungie crew, the costume got a lot of approval (search the page for my handle.) Unfortunately, my armor had not been sufficiently strengthened to withstand the rigors of the flight down to LA and had to be hastily taped back together at the convention, and got even more broken on the way back.

I attended some various other small-scale Bungie-related events around the Seattle area. Several Bungie folks recognized me from the costume, and I got a small rapport going with several of them. This paid off in 2004, when they asked me to be interviewed for the Making of Halo 2 documentary, along with several other fans. Most of the fan stuff, including my interview, got cut from the final production though. Still, with some encouragement by the folks at Bungie, I set my sights on a more ambitious armor project, that of making a Master Chief costume. Nightmare Armor Studios had already started making their own replica Mark VI armor suits at that time, so I decided to make a Mark V (which I would add battle-damage to) to distinguish it from there armors. We adapted the techniques used to make the marine armor with some additional strengthening measures, and the results turned out pretty well, as can be seen in these three pictures. However, the problem was one of scale. The techniques we used were very labor-intensive and very slow, and ultimate we could not find the time to really get it completed. Further, while they looked good, the pieces we had were imperfect. The helmet was almost imperceptibly off-balance, we did not have a method to keep the visor from fogging up, the chest and back pieces were too heavy due to over-use of Bondo to compensate for mistakes, etc. We needed to remake them anyway, but that just added more to the production time and we could not afford it.

Still, the upside to all the exposure my costuming had with the people at Bungie was that they asked me to be in a segment that would ship with the Halo 3 Legendary Edition, which ended up being titled "The Cortana Chonicles: In Search of Fandom". If you have seen that, then you have seen me. However, if you have not, some one was kind enough to upload it to YouTube. Watch between 1:40 and 3:00 to see me and my father and the place we build the armor. That seemed to get me a lot of exposure, and people recognize me from the video at cons (such as PAX08) when I wear the helmet.

In any case, the Mark V armor project is largely abandoned for the moment. Maybe I will come back to it later, but I will probably be rebuilding it again from scratch. Recently, I have been inspired to create an ODST costume based on some of the concept art Bungie posted to their site for their upcoming title Halo 3: ODST. In my search for techniques and materials for making that costume I came across the 405th Infantry Division and immediately saw that I belonged here.
A

well i am currently making a 3D movie about the Daleks from the British sci fi show Doctor who
http://secondempiretheseries.webs.com/

i am also with the help of a friend making a predator film which is currently on hold due to money issues
[attachment=8082:MB___8.JPG]

Hi all, figured I should put one of these up before I start posting.

A little bit more about me, I've been making props on and off for about 10 years, starting with Star Wars, then Predator, Aliens, and finally I've decided to give Halo a try. I must say I'm pretty darned impressed with the stuff that's on here, and although I'm not actually a massive Halo fan, I'd love to make a suit of my own. Here's to making a start!
R

Name: Amadeus (call me Amadi)
Profession: Student (half time n00b programer)
Age: 16
Favorite Hobbys: Programing,Pepakura models,Gaming
Favorite part of halo: Every Halo is AWSOME
Favorite Halo: well... Halo 3, Halo 2 and Halo CE XD
Favorite Video Game: i don't have favorite
Other Interests: i do everything i can in free time... it's never too late to lern something new
Favorite Food: Spicy food and fast food

I'm looking forward to making an ODST costume that can withstand some abuse. I'm ordering real world products and I hope to fabricate something rugged and realistic out of metals and plastics. I don't want a costume, I want realistic gear.
You must log in or register to reply here.
Share:
Facebook Twitter Reddit Pinterest Tumblr WhatsApp Email Link