Mountain Regiment
Been a long time since I've posted on this thread, and I'm sorry. My boss was not kidding when he said that the fall was going to be my busy season. I made no progress during all of October and November, but work has cooled down and progress has gone up.

I rebuilt the knee bit that broke, and put a first coat of resin on the inside and outside of the piece. I think I also got the last corner of the shin rig coated in resin. That piece has a lot of nooks and crannies to work around, especially when you're trying to coat the inside. I also got a thin coat of rondo on the right pauldron, and thicker coat inside the forearms, and hopefully enough inside the left pauldron so I can cut out that last brace and properly coat the inside. 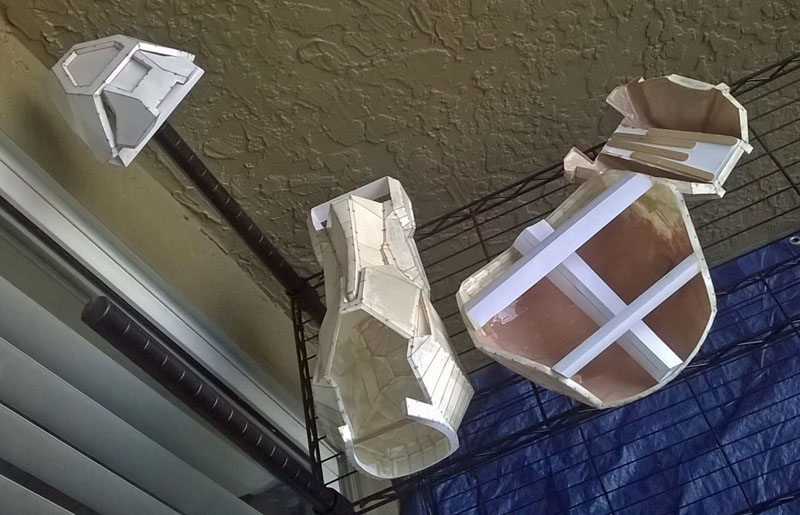 I also tried my first "educated" attempt at Bondo. 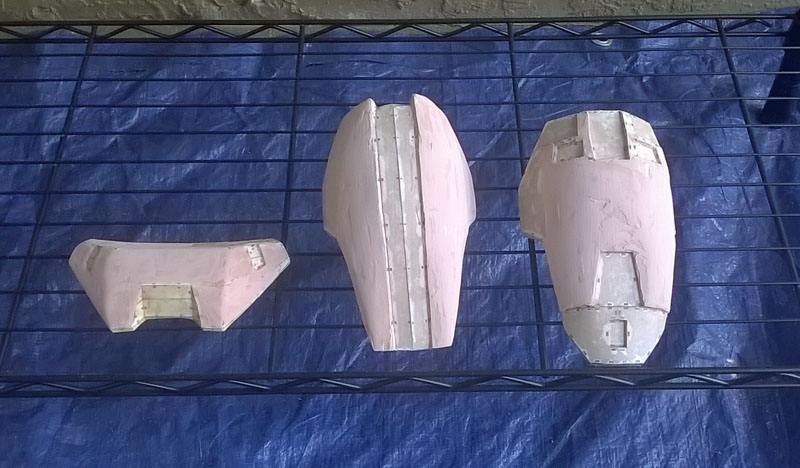 You can see my very first attempt at it much earlier in the thread, but I really needed to do a lot more research on it first. This time, I was more prepared on what I needed to do and what I should do to make things go more smoothly. I highly recommend the videos by Cereal Kill3r on Youtube. He has a series that goes start to finish on his chest piece that covers resin hardening, rondo, bondo and detailing. Another tip I picked up through my researc is using and exacto blade to cut off excess bondo before it dries to save on sanding. I don't remember where I originally read it on the 405th, but it was very useful.

My bondo work is by no means perfect, I really need to learn how to properly spread this stuff, and all of these pieces need more work, but I'm really enjoying this part of the project. I know that lots of people on the site hate this stage because it's hours and hours of sanding, but I got my start on stuff like this from woodworking with my dad all the way back in elementary school. Projects got bigger and more awesome as I got older (and was allowed to use power tools), but going back to all this sanding is very familiar and comfortable territory for me.

Midwest Regiment
Haha I know what you're saying about not caring about sanding that much If you started as a woodworker. I too learned how to woodwork from my dad when I was elementary school age, and everytime I see a thread where someone is complaining about sanding, it seems weird to me, since in my mind, sanding is just a necessary step in a project. Great work tomboy, I'll be excited to see this armor completed!
T

Canadian Regiment
I look forward to seeing this completed!!
T

Mountain Regiment
Progress! Though never as much as I'd like. I finished applying rondo to the inside of almost all the pieces I currently have built. Tomorrow I'll prep them for bondo and detailing. 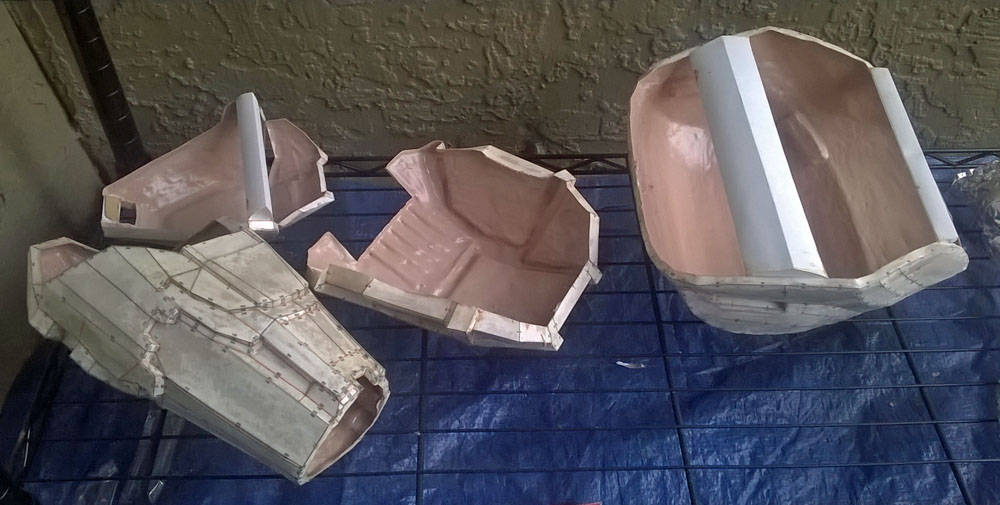 I finally got every last nook and cranny of the shin piece (knock on wood) and have started applying the first thin coat of rondo. This one is going to take a lot of time to do. It's hard to get a paintbrush inside to cover all the angles. 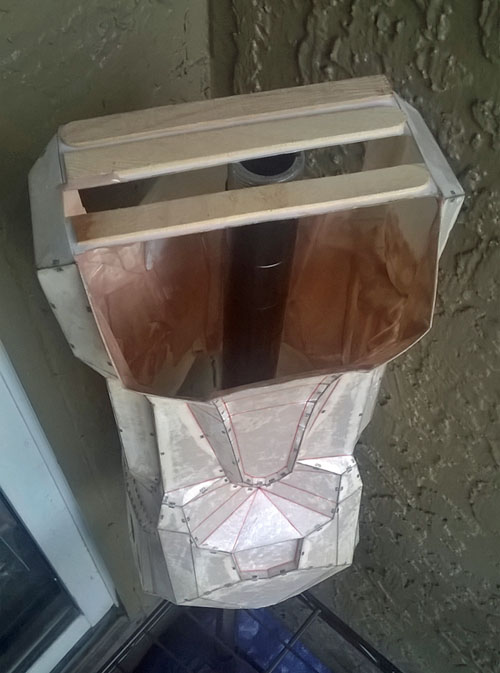 Lastly, I applied more bondo to my bicep and sternum piece. It's slow going, but it's also busier since it's not a case of apply and leave to dry. I'm just glad I have a pair of shop pants, because by the time I was done, I was covered in a thick layer of pink dust.

Ignore the piece 2nd from the left. It's for a different project that will have it's own thread in the future.

The hardest part is just spreading the bondo on the piece. Anyone have any advice? It doesn't spread easy, and half of what I put on doesn't seem to want to adhere to the previous layer.

tomboy said:
The hardest part is just spreading the bondo on the piece. Anyone have any advice? It doesn't spread easy, and half of what I put on doesn't seem to want to adhere to the previous layer.
Click to expand...

Old bondo, perhaps? Or maybe prime the previous layer with a little rougher-grade sanding to give the new layer something to grip and adhere to? You don't need to scuff and mess up the surface too badly, but a smooth surface isn't the best for making new bondo adhere to the old.

Obviously, I didn't meet my goal to have the project finished by the time Halo Wars 2 came out. The foam is giving me a much harder time than I expected, and I've had a lot of weekend work recently that's prevented me from working more on the Bondo stage.

However, I do not intend on dropping this project. It's been teaching me a lot, there's still more to learn, and I've put in too much time and effort to stop now. I will be slowing down/ramping down on the intensity. There are other things I want to work on and learn how to do that will feed into this and other costumes, along with other costumes that I can complete in time for convention season that will only take a fraction of the time to complete. Plus, I have my little brother's birthday present to work on, and another one for my friend.

If I'm lucky, my Mark IV suit will be ready in time for RTX, but recently my brain has been pulled in too many directions and towards too many ideas to keep up progress on this one. I need a break.

Canadian Regiment
405th Regiment Officer
Delta
Grate work so far! I'd love to see it all when it's all complete !

Mountain Regiment
IT'S ALIIIIVE! The project and the thread is alive!!!! ... still. So, while my project may have been on a long hiatus, I have not dropped or quit the build.

Unfortunately, I must hate myself, because I've decided to rebuild the HD torso. After sitting on the shelves for so long, a lot of the reinforcement has broken off and it's slowly collapsed into a sad, sad mess.

Also, the rainy season should end in about a month and hopefully the weather will cool down, and I will be able to go back to doing the detailing on my other pieces. It's too hot and humid to work with resin and bondo right now.

Mountain Regiment
*sigh* It feels like half the updates I make on this thread are reasons and excuses for a lack of progress... So here's another one!

A co-worker in the Wyoming area recently quit, and I was called in to fill in for him for October, again in December, and then I'll be taking over his territory. You know what that means... another cross country move! I still have most of November in Florida, so I'll be trying to do what detailing I can on the existing pieces, but I'm going to toss the warped torso and hold off on making the new torso until I get to Wyoming. With any luck, I'll still have a space I can use to make my armor, but there are no guarantees until I can start some house hunting on my next trip in December.

So, I was able to get some work on my armor done before I moved. It's not as much as I wanted, but it's more important to get everything packed at this point. Plus, there were some days that were just to hot to work on it. At least I started the bondo process on my right pauldron.

In much sadder news, by combat boots from the Navy finally died. The soles on them just... crumbled. 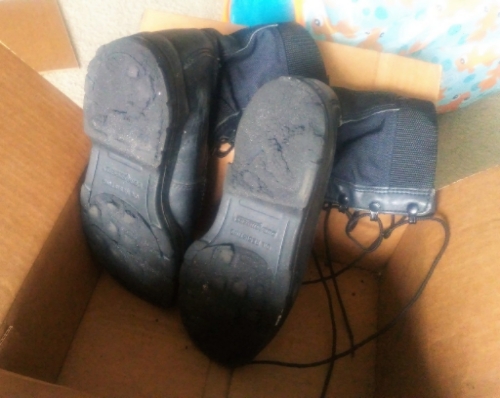 Turns out this is a common phenomena called hydrolysis that affects boot soles made of polyurethane, even more so if the boots have little wear and tear from being in storage or out of use for an extended period of time. It. Sucks. I took a trip down to the local military surplus store to replace them, and after a lot of searching for something in my size, I found these: 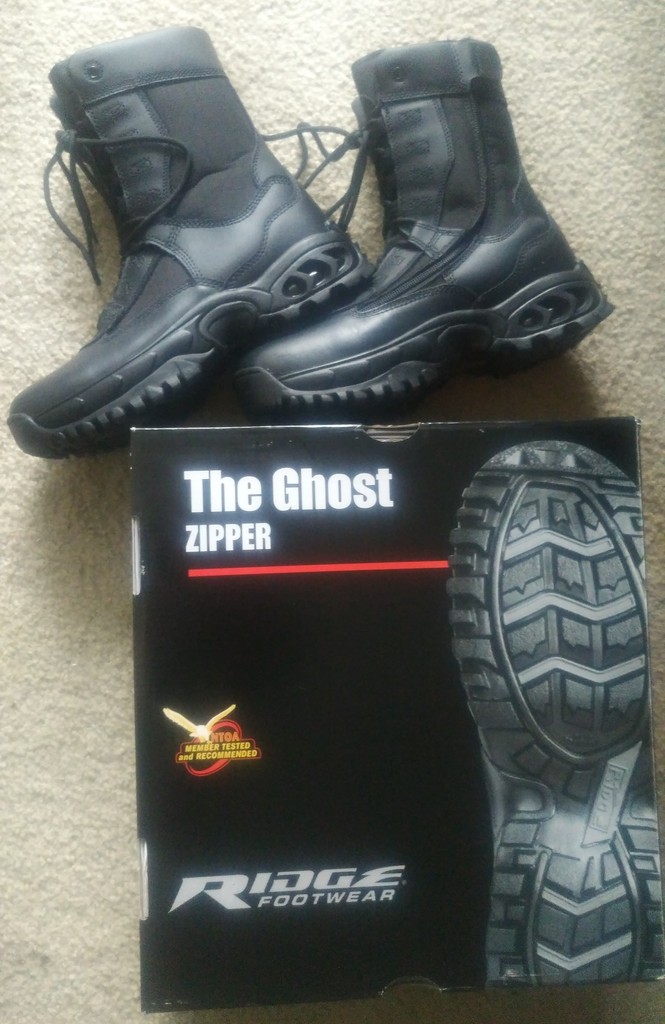 They'll never be the same as my original boots (the style was discontinued years ago), but they're at least comfy and a lot lighter than my last pair since these ones aren't steel toed. Plus, the zipper on the side makes taking them on and off for airport security a breeze!

Another great find I was able to make in my area is just about the most perfect fabric for Halo undersuits ever. Of all time. It's called the Black Scuba Hex by YaYa Han, and there's a white version, too. While once available at Joann Fabrics, it seems like they've stopped carrying it. I bought the last of what they had in stock, and in all this time, it has never been restocked and there have been no plans to order more. Luckily, a quick internet search will lead you to other sellers. I've put a penny on the pattern for size reference, but using this beats trying to sew or paint the pattern onto a piece of regular fabric, and it's got some good 4-way stretch to it. The white version could probably be dyed for use on Halo 4 and 5 undersuits. This is definitely useful for the Mark IV since the entire undersuit has a hex pattern to it. 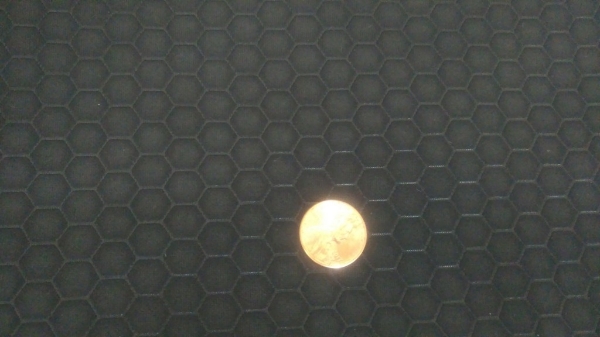 For now, everything is packed away in a box and waiting for the moving truck. And for anyone wondering, the best way I've found to move in-progress pieces is by using packing peanuts. You may have a few sticking to the piece by the time you unpack it, but it's better than a cracked, smashed, or warped piece.

And just because, here's my cat enjoying the boot box. Happy holidays, everyone! I'll see you in Wyoming!

Division Staff
Midwest Regiment
405th Regiment Officer
I had the same thing happen to the soles on one of my Spider-man suits. They were "Aqua" shoes with a polyurethane style sole, and I hadn't used that particular suit in years, having replaced it with a suit with better coloration an detail, but pulled it out to think about using some Brush on Plasti-Dip to make it a symbiote transition suit, and the soles of the shoes just cracked and crumbled away in my hands.

Mountain Regiment
I have officially reported to Wyoming and the Mountain regiment! Unfortunately, my household goods have not followed. Instead of being picked up and delivered within the original window, they aren't even going to be loaded onto a van until the 16th. Until then, I'm stuck twiddling my thumbs on this project.

Mountain Regiment
405th Regiment Officer
I like that post, but actually it's because I dislike it. I'm sorry to hear your stuff hasn't gotten packed up! That stinks. Hope things get figured out quickly!

Mountain Regiment
Huzzah! All my stuff has finally been delivered! ...a month late...

Well, either way, I've been able to unpack most of my stuff (things were delivered in 2 deliveries, 3 weeks apart) and can work on my project again. Admittedly, it's on the back burner right now. I have other costumes that I need to have finished before the end of June; plus, it's hard to do resin work outside while it's snowing. However, I can still try to work out some of the foam-build pieces and the undersuit while waiting for it to warm up. Also, I have time to rebuild the HD torso. Progress will be slow, but I'll do my best to keep working and updating.