Hi everyone! Thought i'd share with you my noble 6 build that i just finished! This is my first serious cosplay build ever. I've done some small stuff before, an Iron Man helmet, a Captain America shield and a Boba Fett helmet, but never anything in this scale.

Here's a shitty pic of my Noble 6 from the game, from which i based my design on. I played as a female spartan (as seen in the picture), but since im male in real life i made a male costume. The colour scheme i used is the same as in the picture. Primary clour is dark grey, secondary colour is light gray.

I had only three weeks to make this suit because I'm planning to go to a convention coming up this weekend, so i had to skip some parts of the original design. For example i only made the default chest armor, skipped the tacpad and the utility kit on the thigh. I also went with black visor, because i didn't have time to order a visor online. So i just cut out some plastic from a big soda bottle and painted it with a black marker pen. Hey, as long as it works, right?

I actually started making the helmet about a year ago, but i didn't have time to finish it, so i picked it up again three weeks ago and decided to complete the whole suit. Sadly I didn't take a lot of progress photos, but i'll show you what i have.

Here's the finished helmet, with some lights on the UA/HUL attachment.

The back part of the chest armor is incredibly asymmetric, i kinda messed up on that part. Other than that i'm happy with it.

After this i made the bicep, shoulder, cod, and wrist pieces, here are some pics.

The bicep pieces was a nightmare to build. I'm a tiny guy, so the pieces i made from the pepakura files didn't fit at all, and if i scaled them down it just looked weird becuase they got super tiny. I decided to freehand the bicep pieces completely, and i'm pretty happy with it, even though they're not completely accurate. One of the shoulders is the ODST shoulder (my absolute favourite) and the other one is the UA/base security. It can't be seen in this pic becuase i was facing the other way. I freehanded the UA/base security shoulder too, because i couldn't find any pep files of it.

After this it all went very fast, and i finished the rest of the suit in about 1 and a half week. Here are all the pieces painted and some test fitting. I made the ab plate that goes between the cod and chest piece, and added a round piece because the ab piece didn't cover everything.

Chest piece and helmet after blackwashing, weathering and some battle damage.

I'll post some more pics of the finished suit in a minute! 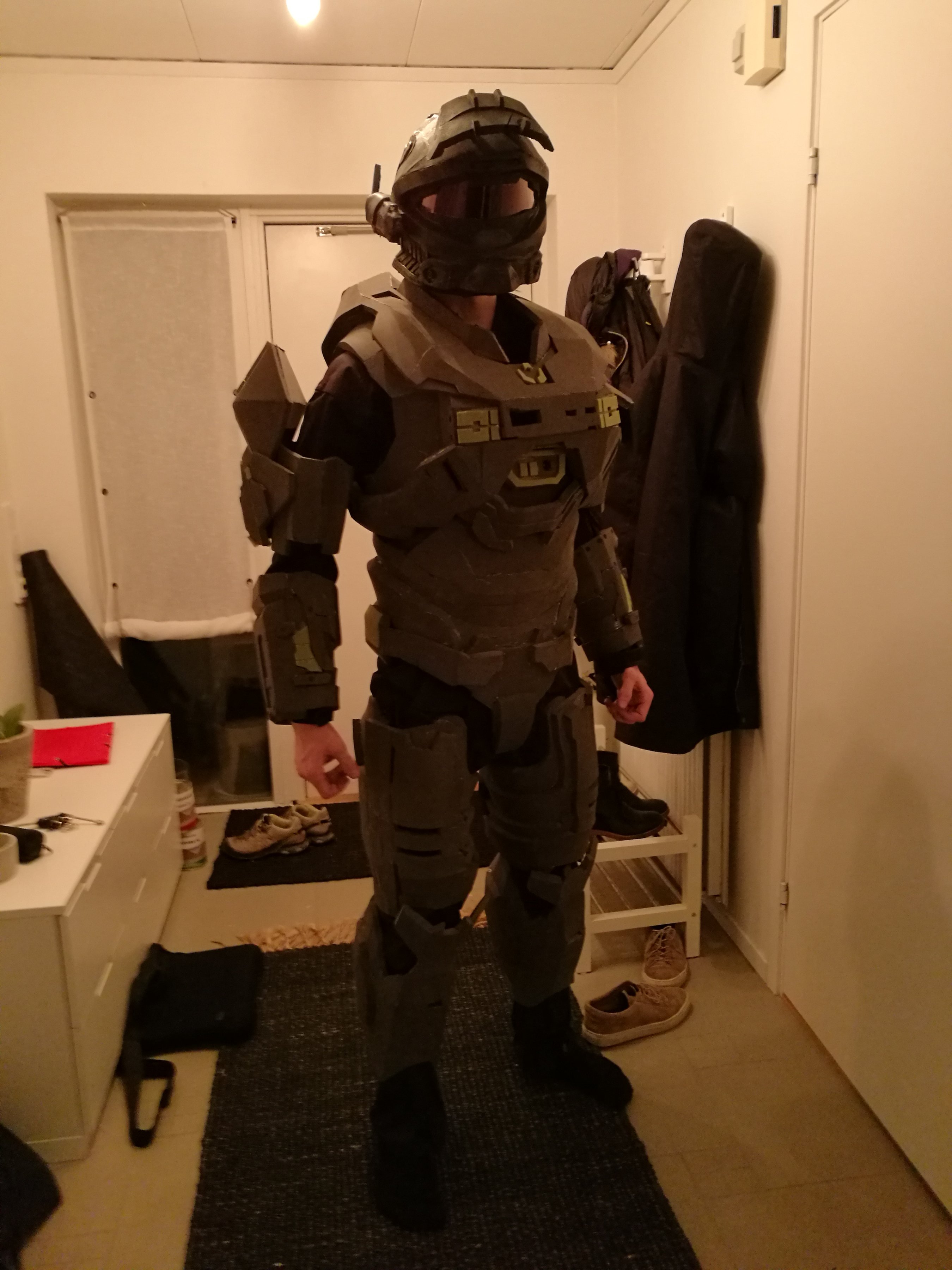 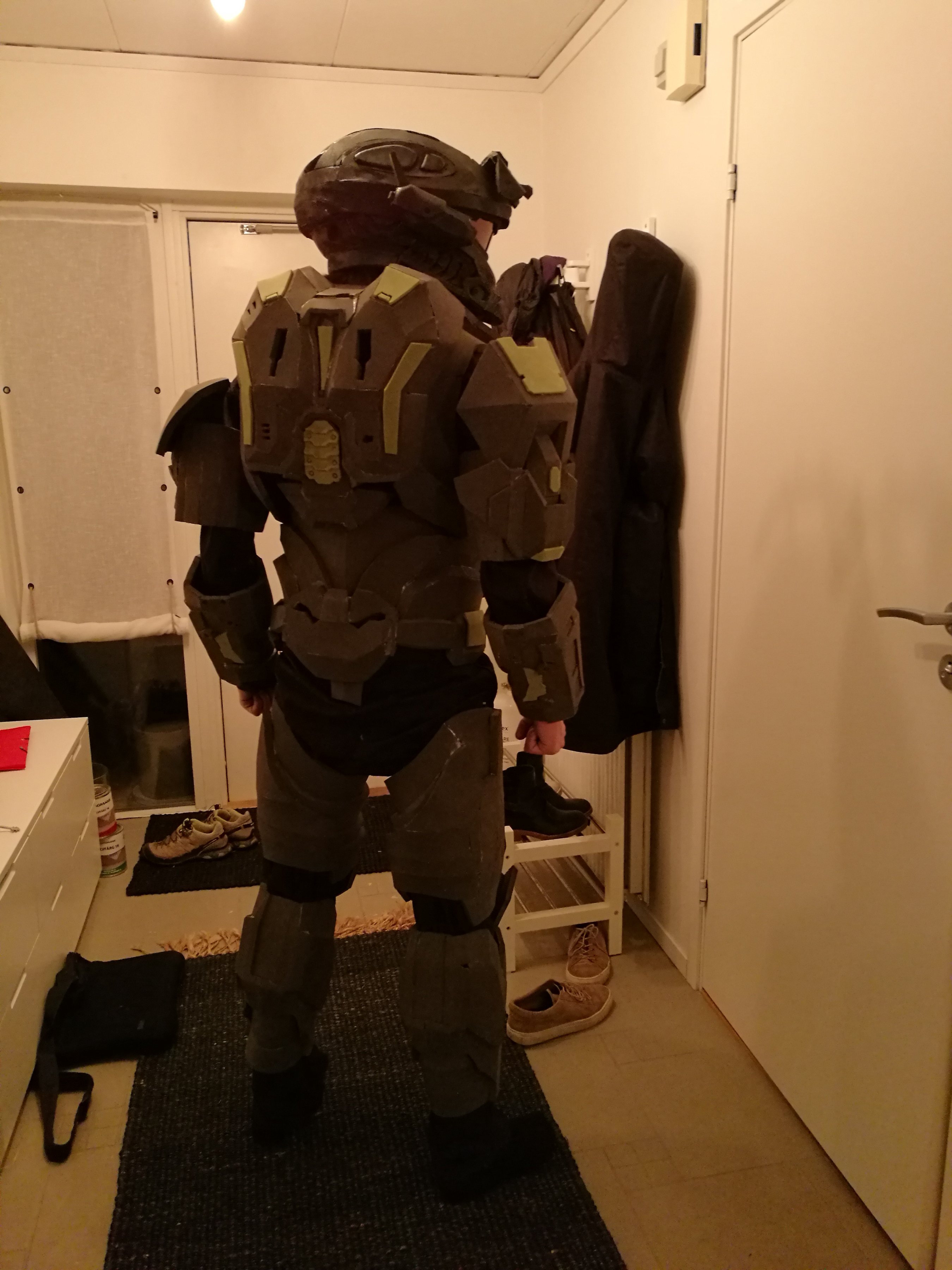 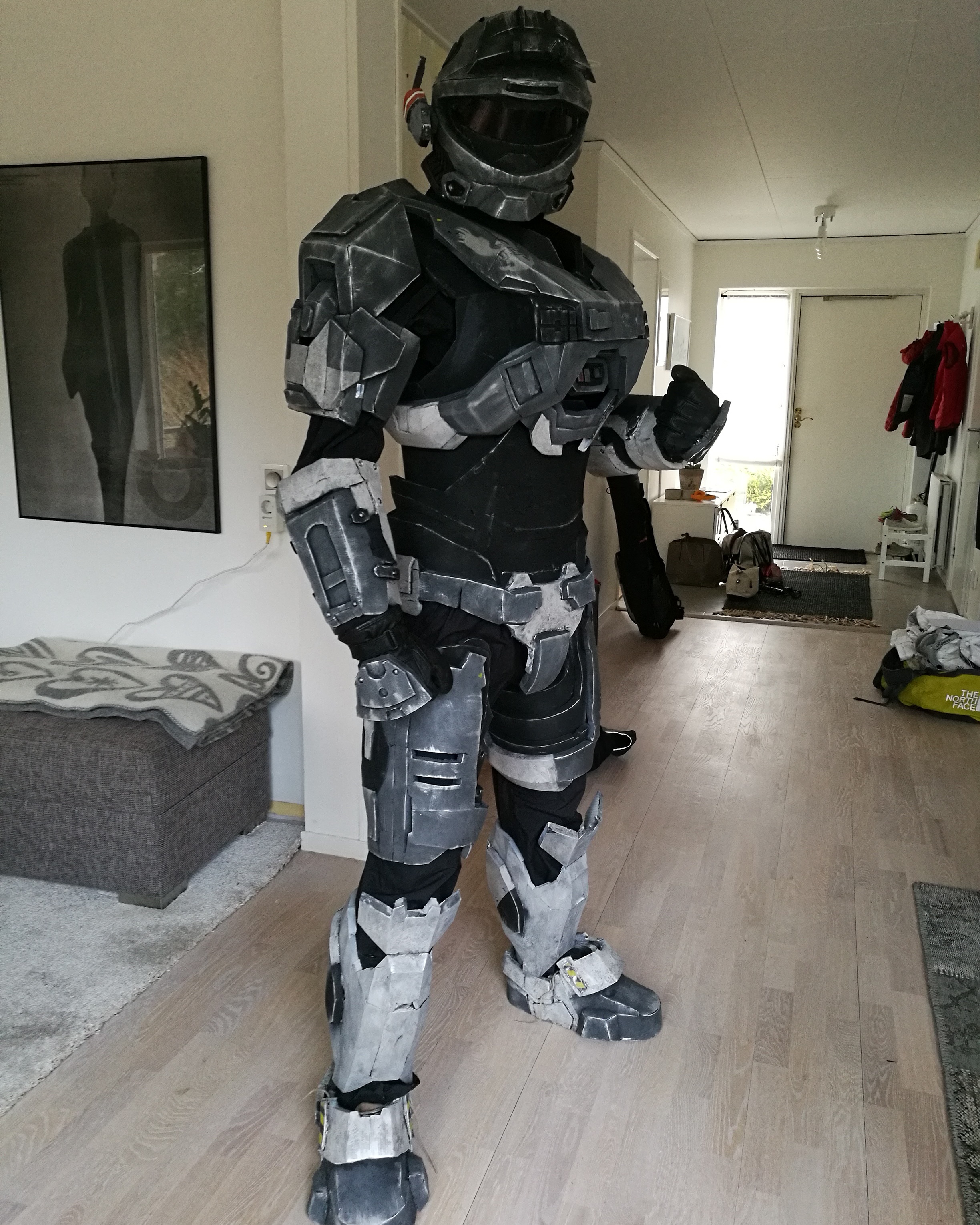 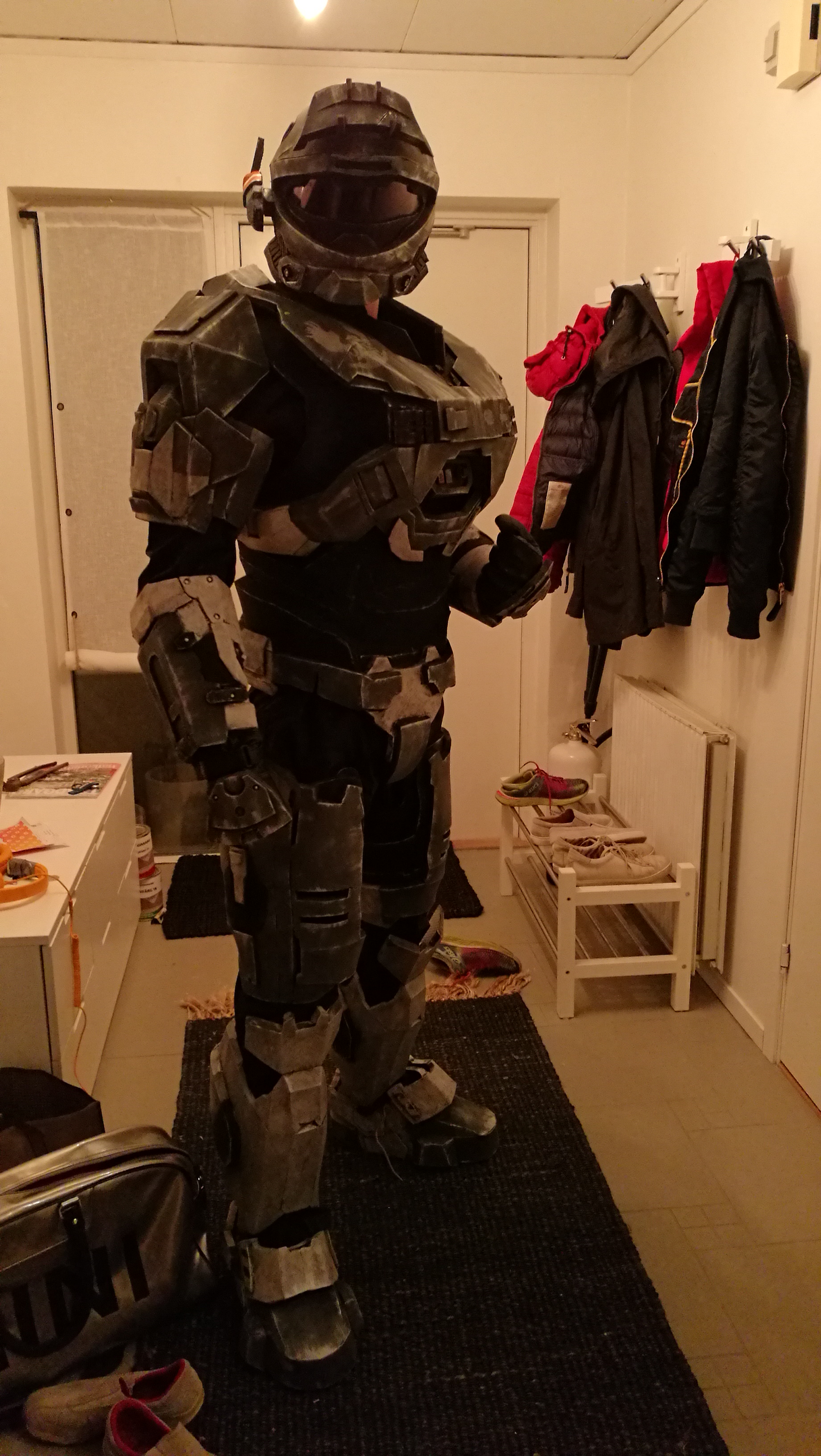 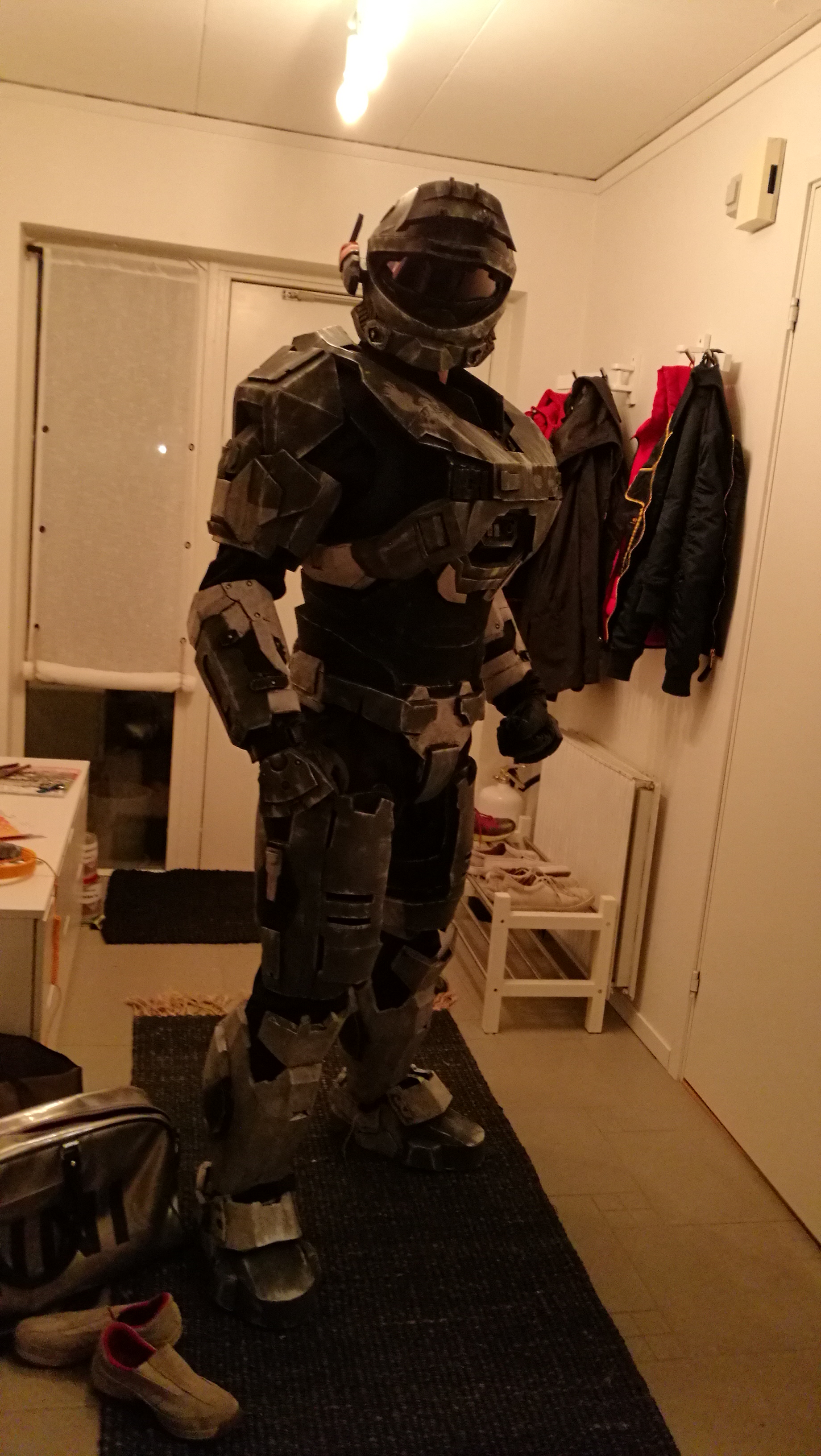 Some pics of the details:

And here are some with better lighting.

If anyone is wondering what undersuit im using, it's a dark grey flight suit i ordered from ebay. I planned to use it for a mandalorian cosplay but i completely gave up on that project and used the flight suit for this instead. Works very well!

There are still some things i have to finish before the con this weekend. I'm gonna connect the thigh and shin parts to eachother, and the thigh parts to the cod piece, so that they don't fall down. I'm just gonna use some elastic bands for that.

I'm also gonna install some blue lights like they have in-game on the chest piece, bicep and thigh pieces. However i don't know how i will connect them to the thigh pieces, because then the cables would have to run through the ab plate too, and i don't know how i'm gonna put on the suit if i connect that to the chest piece. If anyone have any smart solutions feel free to share. I will probably post some more photos from the con this weekend, and me and my friend are planning a photo session since he is currently studying photography. We'll probably get some cool shots in the woods, since that's all we have here in sweden. Peace out for now!

Southwest Regiment
That is so awesome you did a great job.

Wow! This is such a great build, nice work!

Pacific Regiment
Washington
Love the build man, great paint job! It fits you really well, props man! How long did it take you to paint it?

Thom A293 said:
Love the build man, great paint job! It fits you really well, props man! How long did it take you to paint it?
Click to expand...

Thank you!! the painting took me about 4 or 5 days i think. I didn't spend too much time on it. It only has one layer of plastidip and one layer of paint, and then some sloppy battle damage.

Thank you so much!

Okay so as i said i was going to a convention in gothenburg this weekend by train, but sadly Stockholm was attacked last night. It is belived to be a terrorist attack and because of that all trains were cancelled. However i managed to catch a train this morning and i am currently on my way to the con. I will try to post some pics from it later today!

Canadian Regiment
Holy. That's crazy good and holy that's crazy news..
Beautiful suit.
I dont know what you have to work with in Sweden but you could use one of those super tiny strings of LEDs like this. Theyre super easy to install, ca be cut and the battery pack could be recessed into the foam.

electricknite said:
Holy. That's crazy good and holy that's crazy news..
Beautiful suit.
I dont know what you have to work with in Sweden but you could use one of those super tiny strings of LEDs like this. Theyre super easy to install, ca be cut and the battery pack could be recessed into the foam.
Click to expand...

Those LED strings look interesting! I will definately look into that, thanks for the advice!

Sorry for being a week late with pics from the convention.. Here they are! 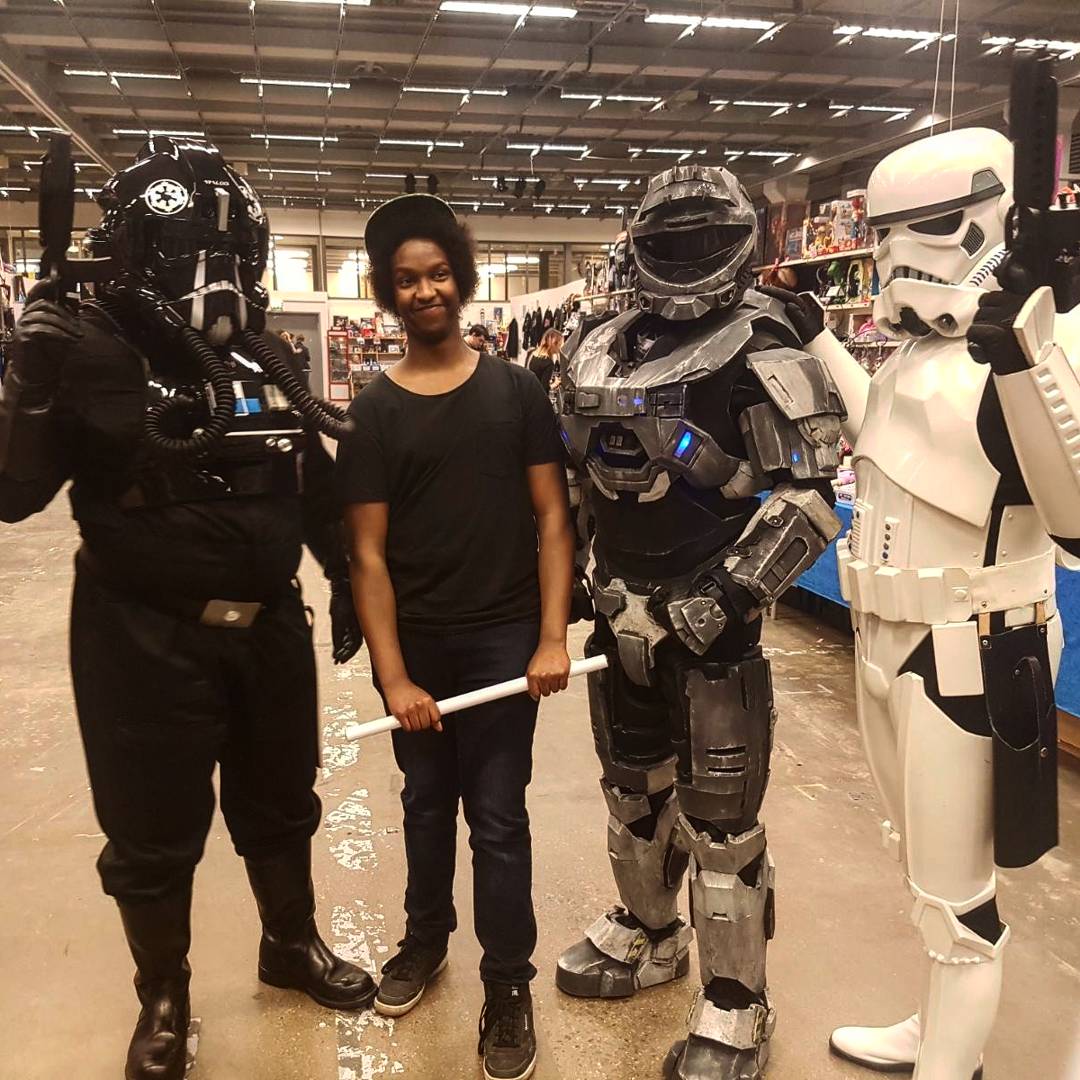 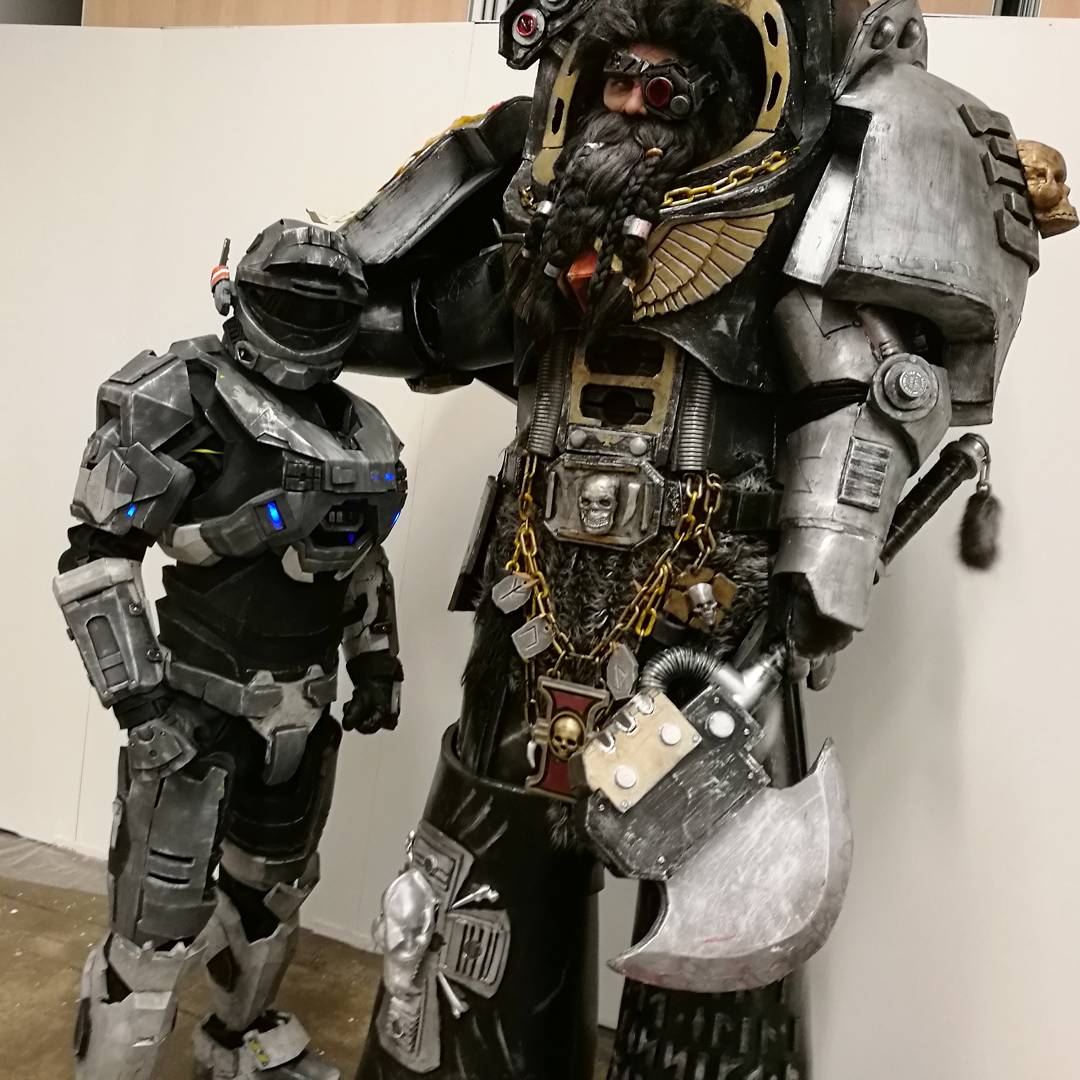 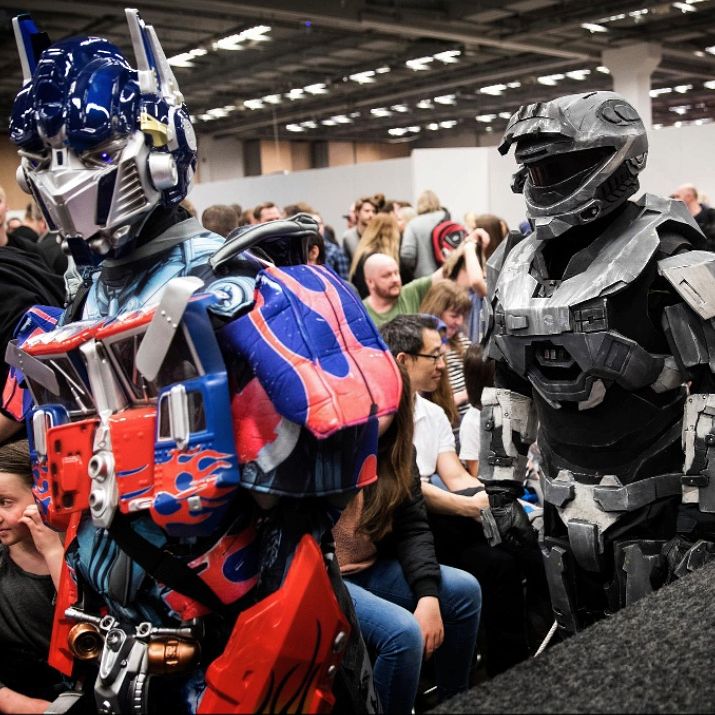 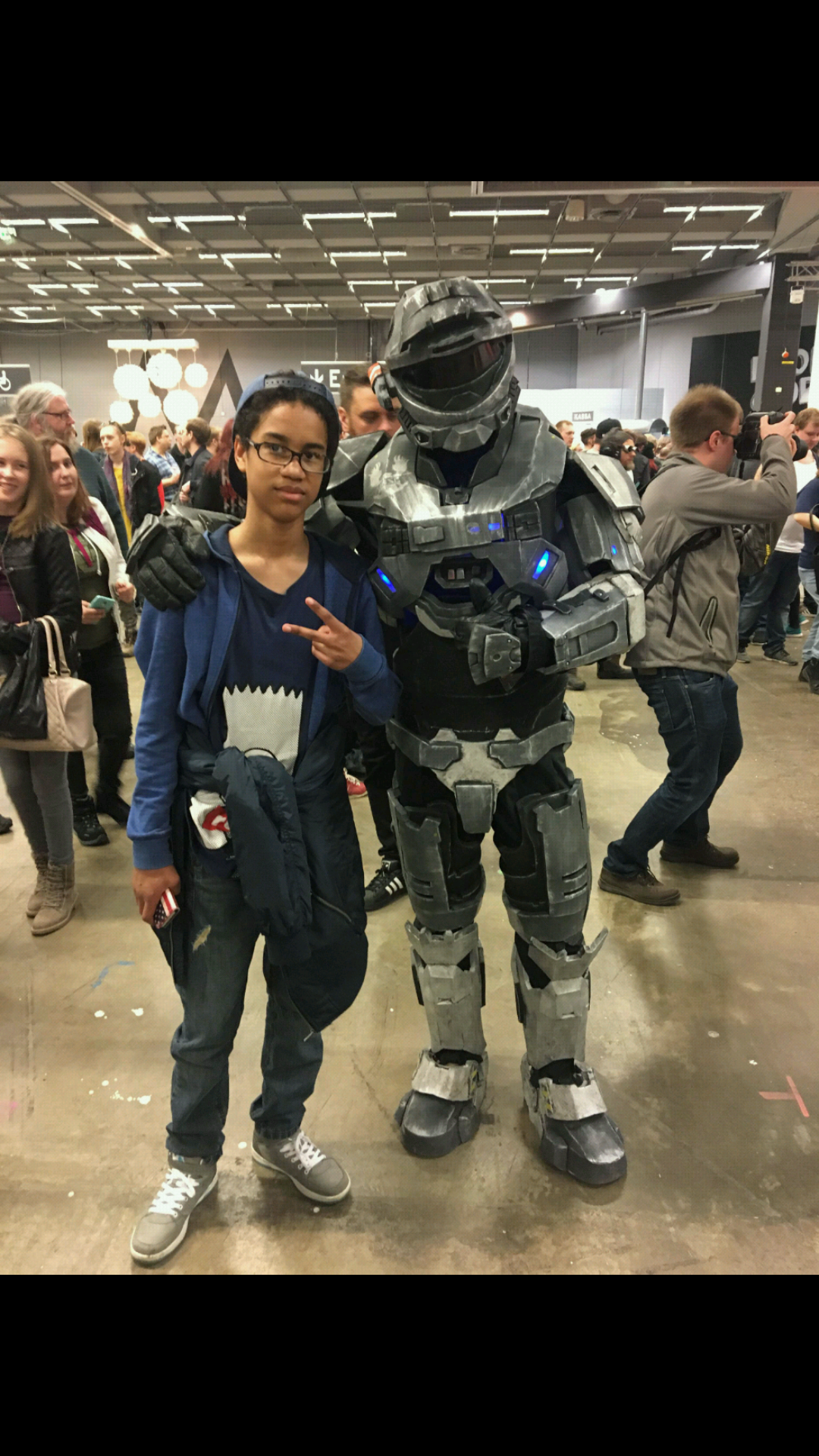 Took some pics with the Swedish police too. 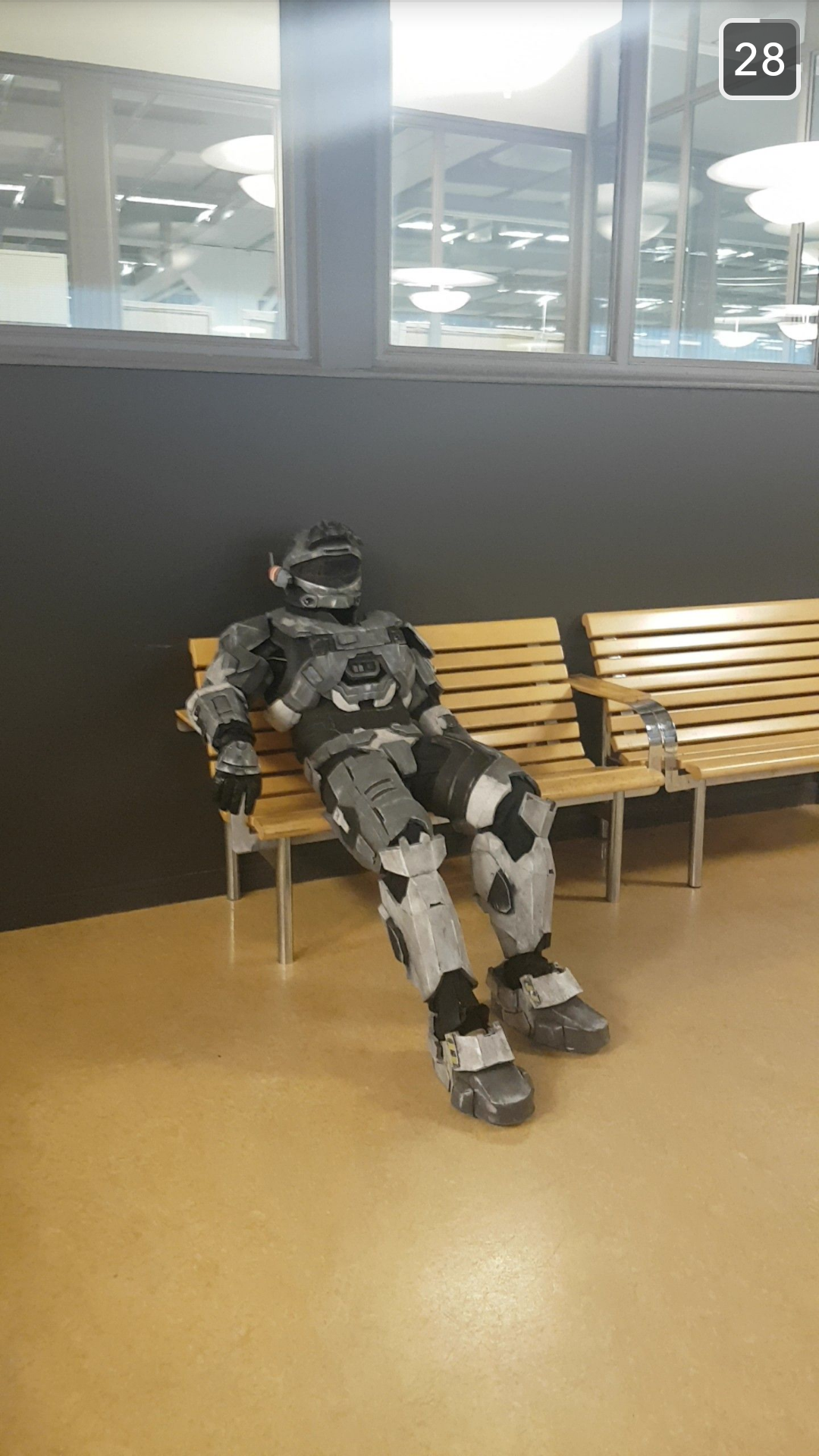 Tired after a long day... 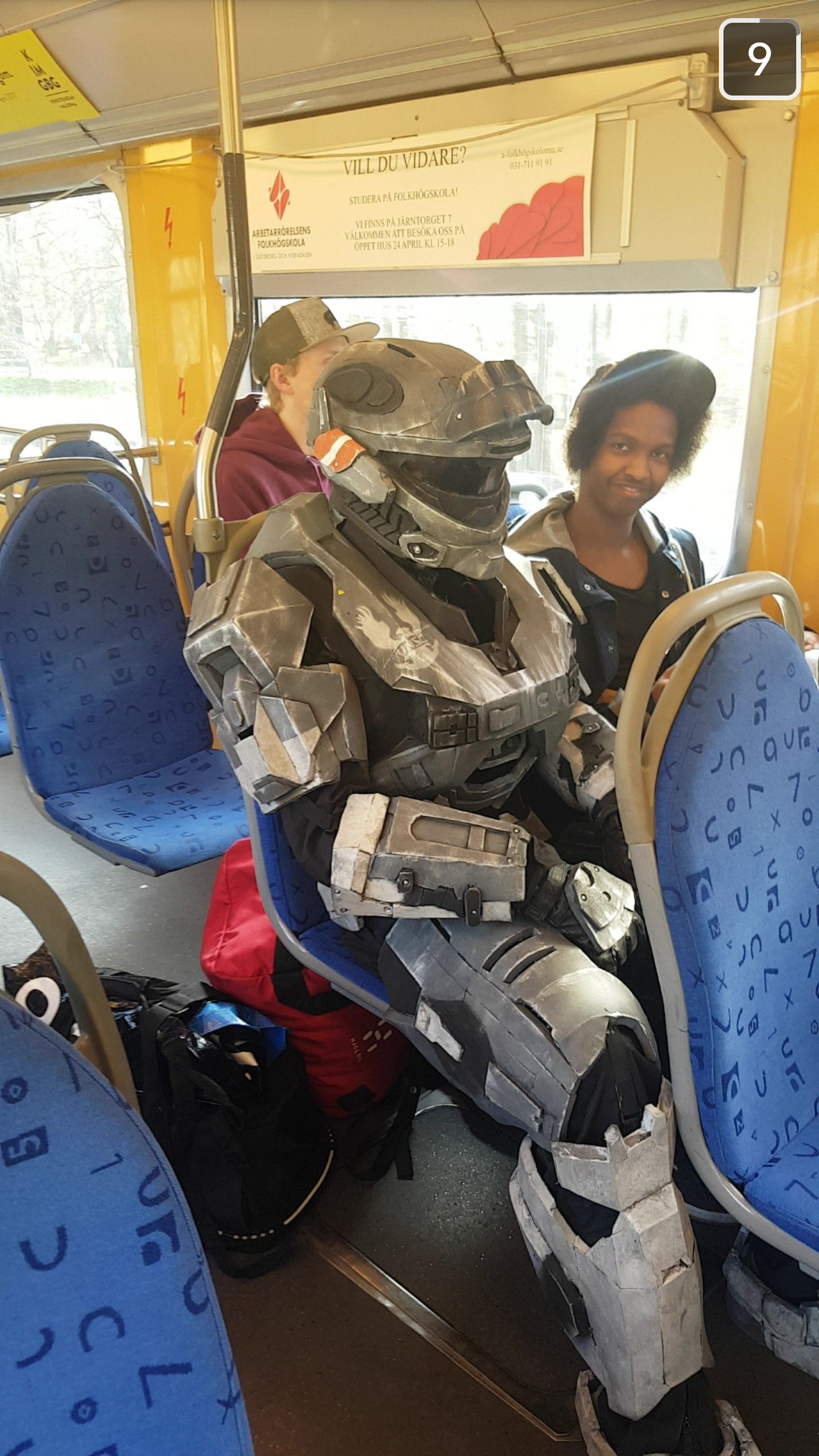 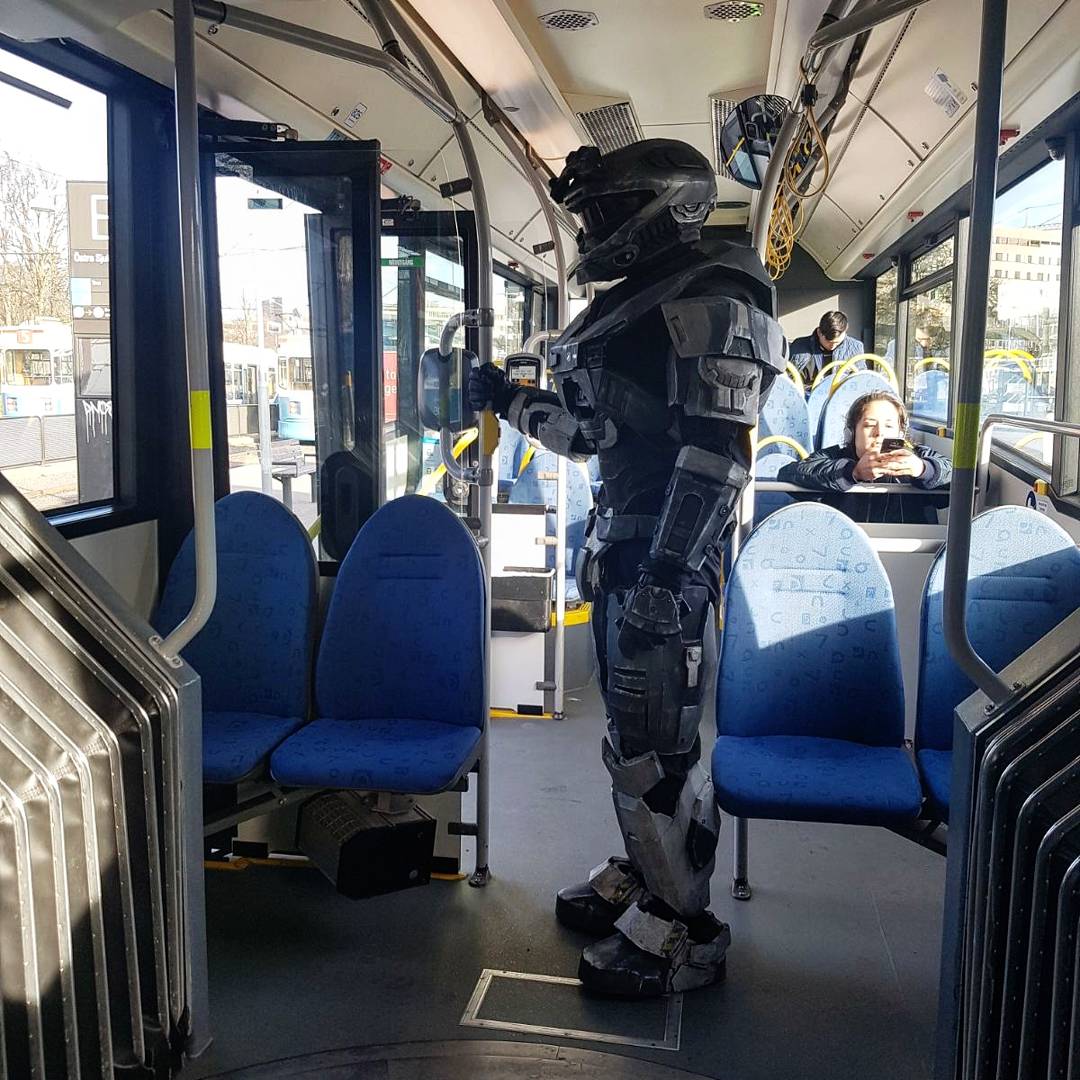 Well this has been great, the con was very successfull, i met a ton of cosplayers with dope costumes. These are all the pics i have though, so i hope you like them! I think i'll start building a new and impoved Halo Reach suit soon! Stay tuned and thanks for the support!

Canadian Regiment
Ah, I love seeing pictures of Spartans out in the wild. Awesome suit! Something more improved than that's going to be quite something! Best of luck to you!


Schankerz said:
Ah, I love seeing pictures of Spartans out in the wild. Awesome suit! Something more improved than that's going to be quite something! Best of luck to you!
Click to expand...

The Adventure of Noble Row and his first actual build.