A project actually for ME! (pic heavy)

Having built various weapons, prosthetics and other costume props for other people and projects over the last three years, I have decided to build a costume for me! Woohoo!

The reasons are these:

I want to showcase my work.
I want to be able to attend fancy dress in more than just a black cape and a pair of fangs.
It would be nice o attend a few 'cons' and other events.
I actually want to get to keep something for myself.

The brief I set myself was as follows:

So, I've chosen to make a hybrid and to use differing bits and pieces mostly based on overall simplicity.
I've gone for a Jorge variant helm, standard PEP build, glass, rondo etc. I may decide to use Spackle paste instead of Bondo to keep cost down a bit. I'm looking for an out come like this (minus the attachment) I like the colours too. 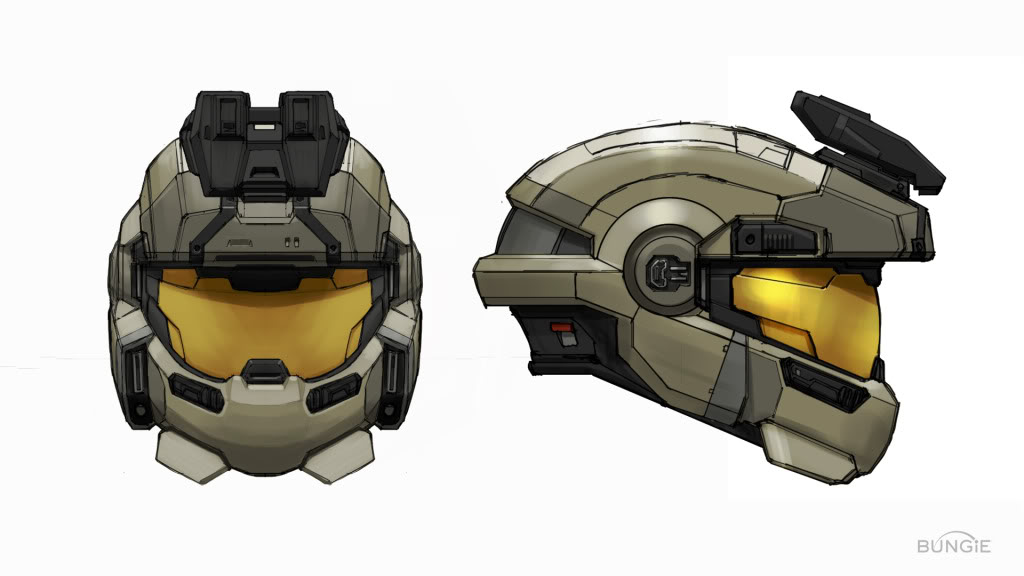 Armour will be scratch built in foam over a basic under armour. I've started with a very basic H3 Marine chest as a base. I haven't decided what to use for the other bits just yet, but I'll probably mix and match to suit my taste.
One thing that I have decided is that I want to bring the chest armour down over the torso in a similar way to this.

I know it's not really bulky enough, but I like the idea of bringing the torso down to just above belt level.

As to the weapon? Well I wanted something a bit different. I went through the Halo stuff, and the Mass Effect, Killzone and District 9 weaponry. I finally trawled through the gamers concept weapons and found a nice rail gun design. So it's come down to one of these three. 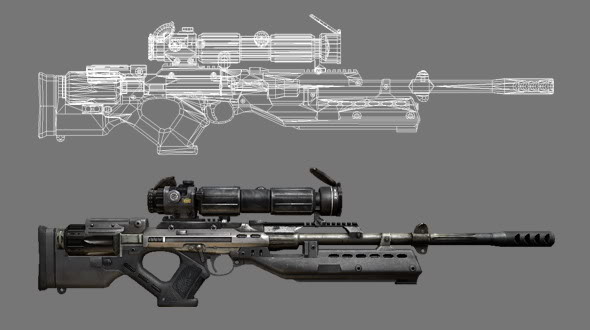 From a concept artist

I'll probably change the colours a bit though. Any thoughts on which you think is best? 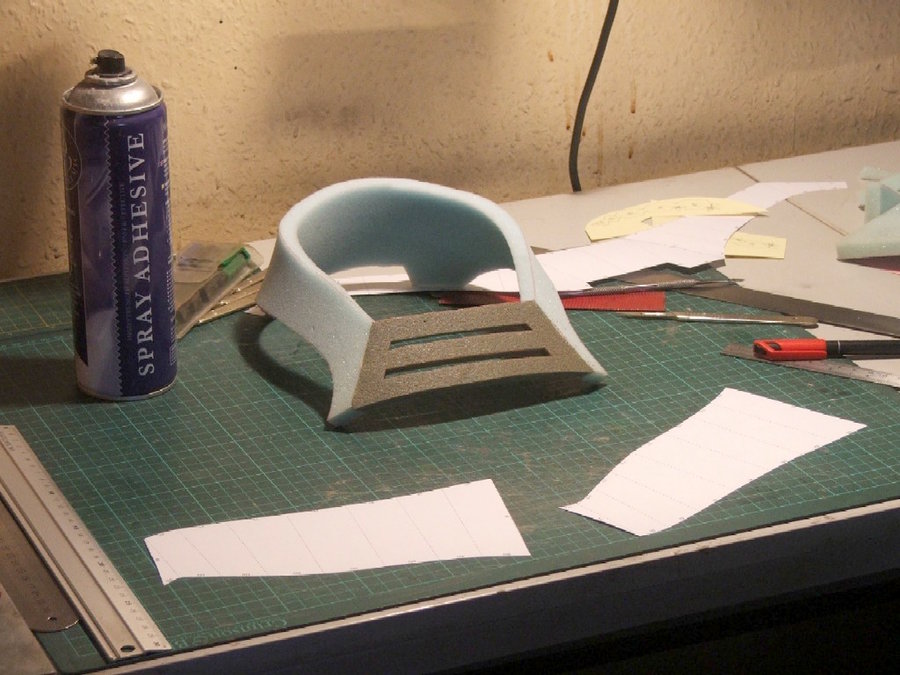 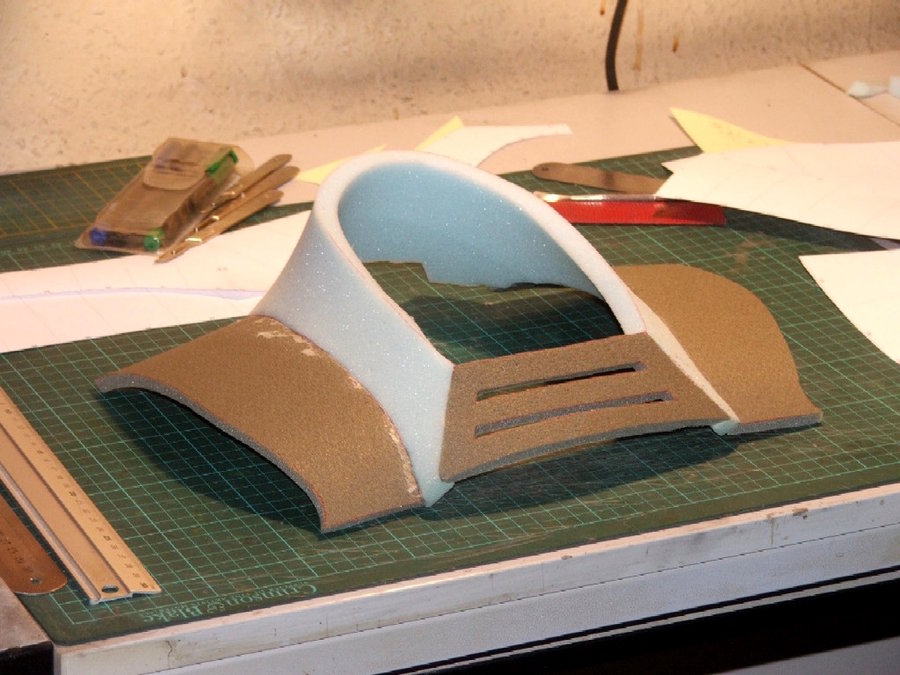 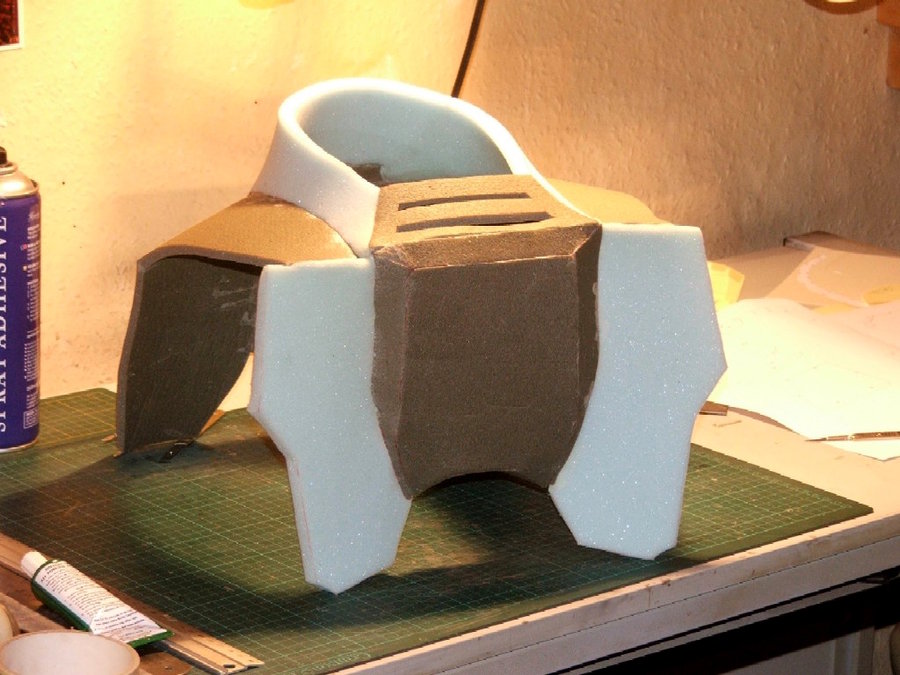 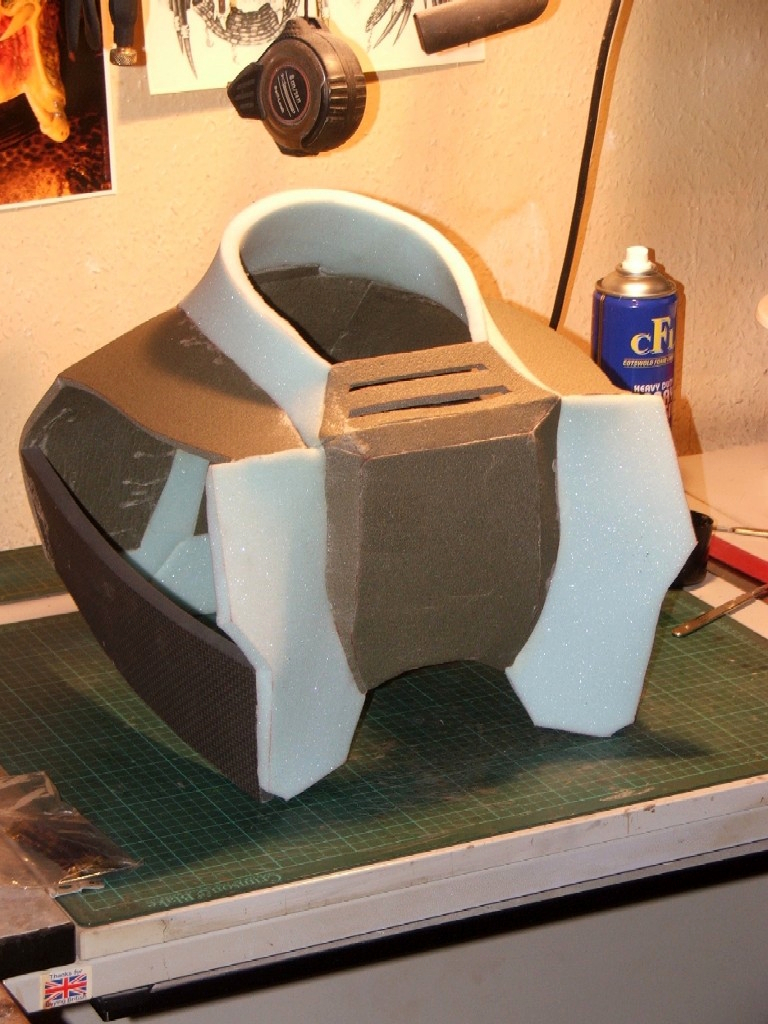 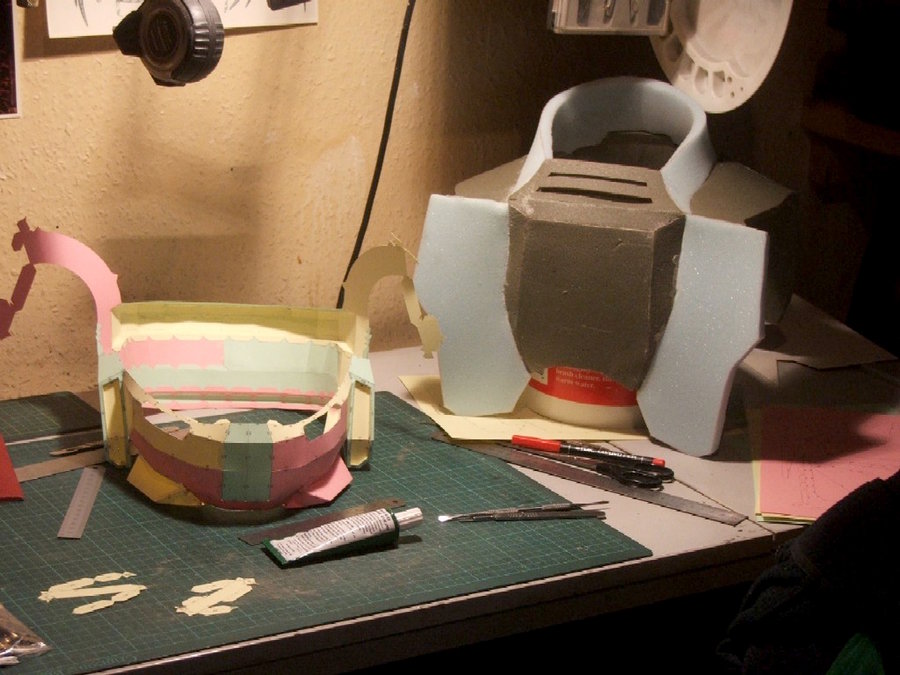 More updates as and when I can get to work on it all.
D

Looking good so far, can't wait to see where you take this. As for the weapons, I'm going to have to vote for the Killzone sniper rifle; looks like it would match the rest best, and it's super awesome.
M

Nice idea! I think this will look pretty cool!! . Id say go with that mass effect rifle cause it looks bad @$$ !!.
U

awsome idea man... keep it going...
now watch someone be a troll and make everything the same way you did
A

Very nice to see you building for 'you'. Will help with materials and mickey taking if I can ;-) Can you get that chest on and off ok? lol

I would go for the killzone rifle but I know you will do a fantastic job of whichever one/s you choose.

Midwest Regiment
This looks like it will be a very cool build. Looking forward to seeing how it comes out.
M

So much for setting myself a quick build. I got waylaid on day two with finishing this mask for a theatrical company! 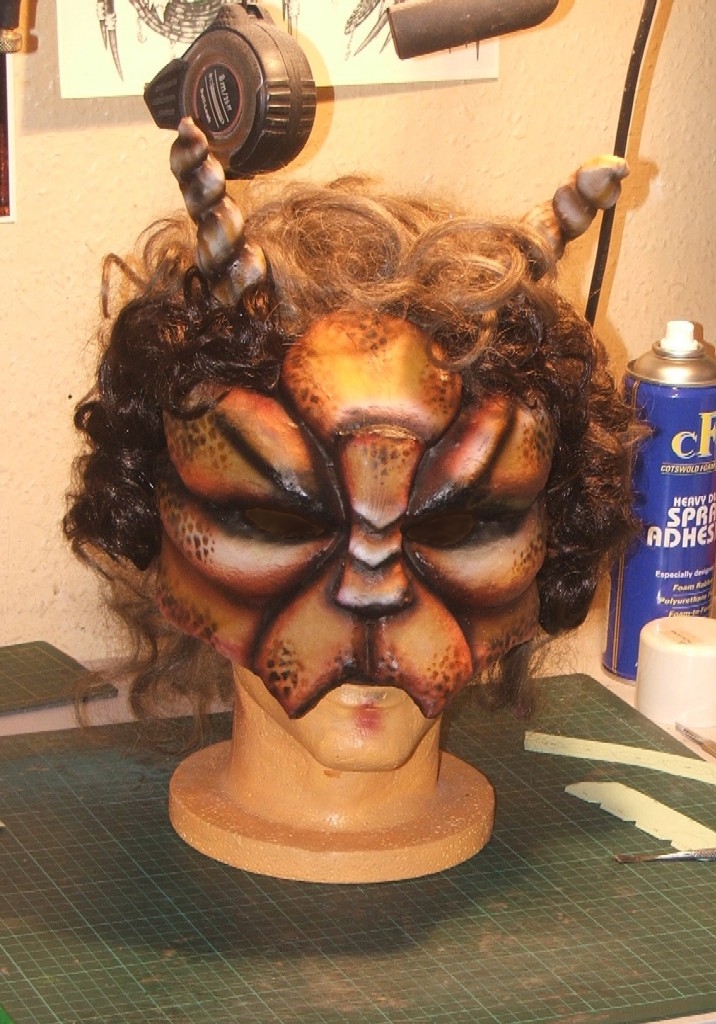 However, I pulled my finger out today and finished the helm PEP. The file was sent to me so I don't know the 3D designer or the unfolder, but thanks to whoever did it! Nice to see some smooth work instead of an all faceted design.
I had two disasters during the build. First I knocked it off the bench with the bloody beast mask (clumsy 'a' hole) and dented the front left chin extension. No big deal on that one.
However, I decided to build this helm in a different sequence from usual. Usually I start at the back and work forwards, but the two previous MC helms both had warping at the front where all the tiny errors in the build are amplified. This time I went for a ground up sequence. My warped (excuse the pun) logic saying that any errors should be evenly spread around the helm and since I was building symmetrically should be the same on both sides?
Everything seemed to be going to plan until I fitted the front crest, glued it up and then went for a coffee. When I came back i was horrified to find that two joints had slipped under the effect of pulling them together and had then dried solid with two HUGE warps on either side. At least they were symmetrical so my plan sort of worked!
I dallied with starting over but I was only 8 pieces from finishing. Bollox.
I built the rest and added internal supports and played with the edge tabs. I managed to dial out enough of the warps that i think it's salvageable under Bondo. 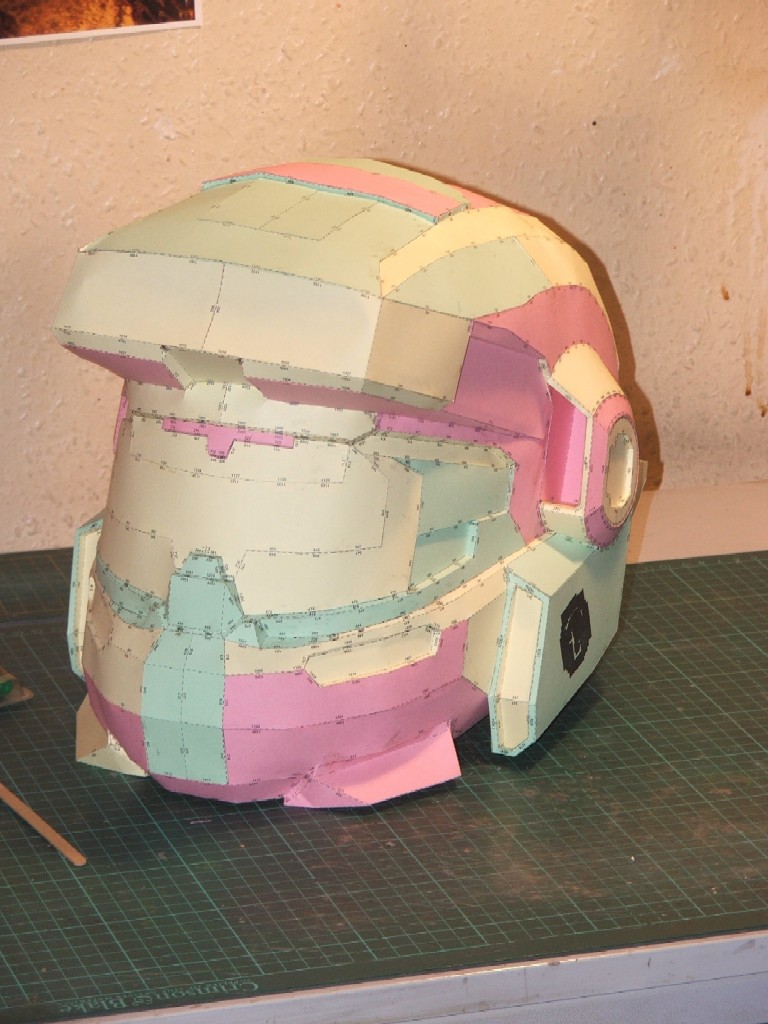 I'll e doing some more on the armour and starting on a weapon tomorrow, so hopefully I can get back on schedule.
F

Gun three is definitely the coolest of the weapons, but that Killzone rifle seems to fit your design better. either way it looks awesome.


btw, the Jorge helm file was rebuilt a while ago, made more to suite the in game design. Just letting you know. Link
M

ForgedReclaimer said:
btw, the Jorge helm file was rebuilt a while ago, made more to suite the in game design. Just letting you know. Link
Click to expand...

Ha ha, now you tell me! Thanks Scott, I've downloaded the bicep and shins for a test run, i'll dowload the helm too, no reason not to work on two is there?
R

marshon said:
Ha ha, now you tell me! Thanks Scott, I've downloaded the bicep and shins for a test run, i'll dowload the helm too, no reason not to work on two is there?
Click to expand...


No there isn't. I am interested to see this one finished. Best of luck to you sir on the build.
M

Thanks to Forgedreclaimer for letting me know that he had some updated PEPs. I decided to build a shoulder / bicep to check speed and feasibility of time constraints.

I decided to use really cheapo packing foam for this. I got this far in 4 hours. Just needs some minor details, latex and paint to finish. If all goes as well as this one I should be able to finish the armour and helm within my two month deadline.

The undersuit and weapon may over-run a bit though ..... 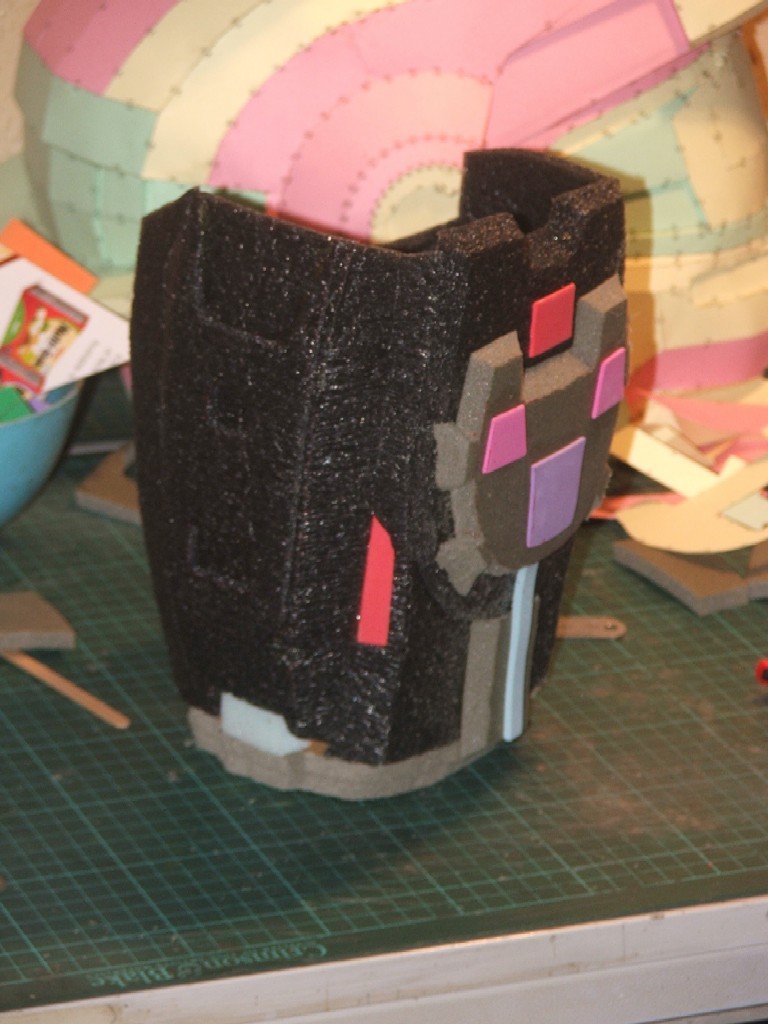 The helmet. It looks like a combination of an O.D.S.T. helmet and a Spartan Scout from Reach. Looks very interesting. I'd like to see the final outcome.
P

XTheDarknessOfLightX said:
The helmet. It looks like a combination of an O.D.S.T. helmet and a Spartan Scout from Reach. Looks very interesting. I'd like to see the final outcome.
Click to expand...


.....it's jorge's helmet isn't it? The grenadier helm from reach
P

XTheDarknessOfLightX said:
The helmet. It looks like a combination of an O.D.S.T. helmet and a Spartan Scout from Reach. Looks very interesting. I'd like to see the final outcome.
Click to expand...


Have ya played Reach, man?
M

A small update on the time line. I was able to do a fair bit last night. The bicep armour has been coated in latex and given a matt black undercoat. 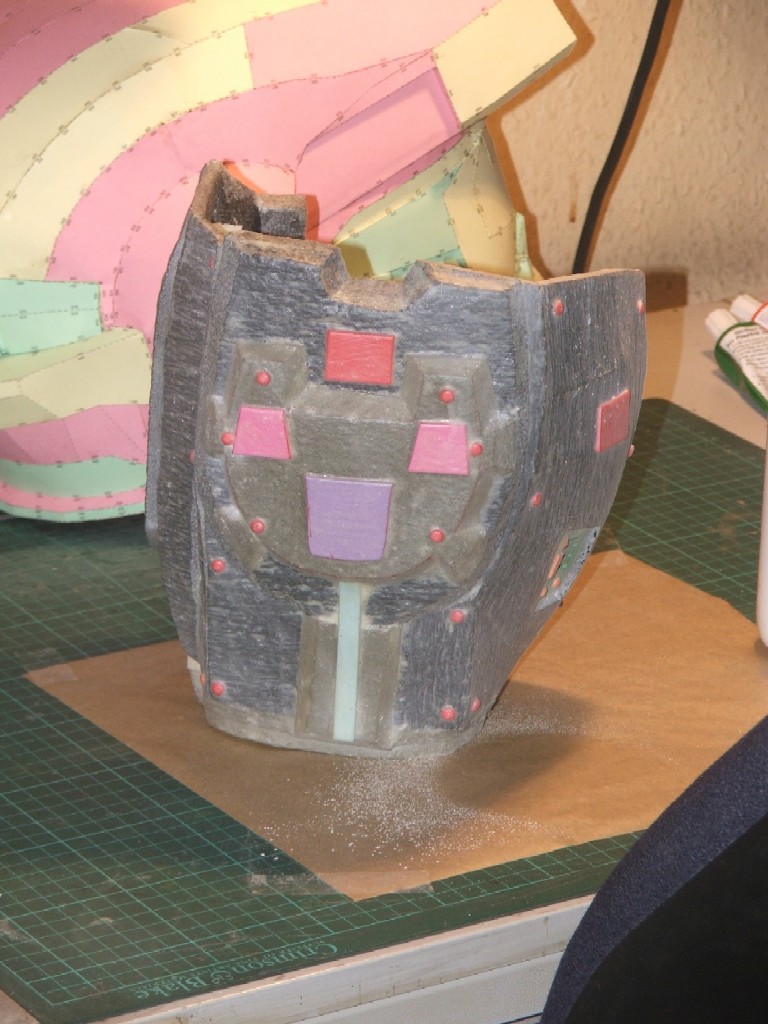 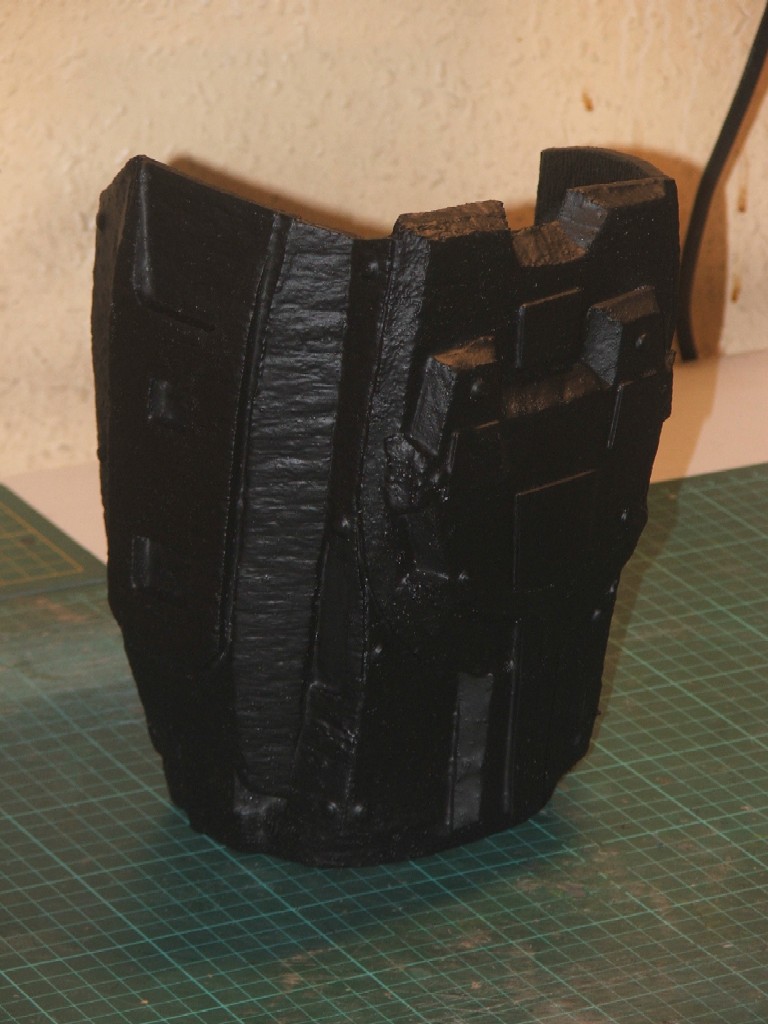 I should have gone straight on to the right bicep, but in trying to decide on which bits to use I came across an HD Reach image I really liked. The bicep is the same as this one, and the shoulders looked like MK VI with only minor differences so I've started on my modified shoulders. 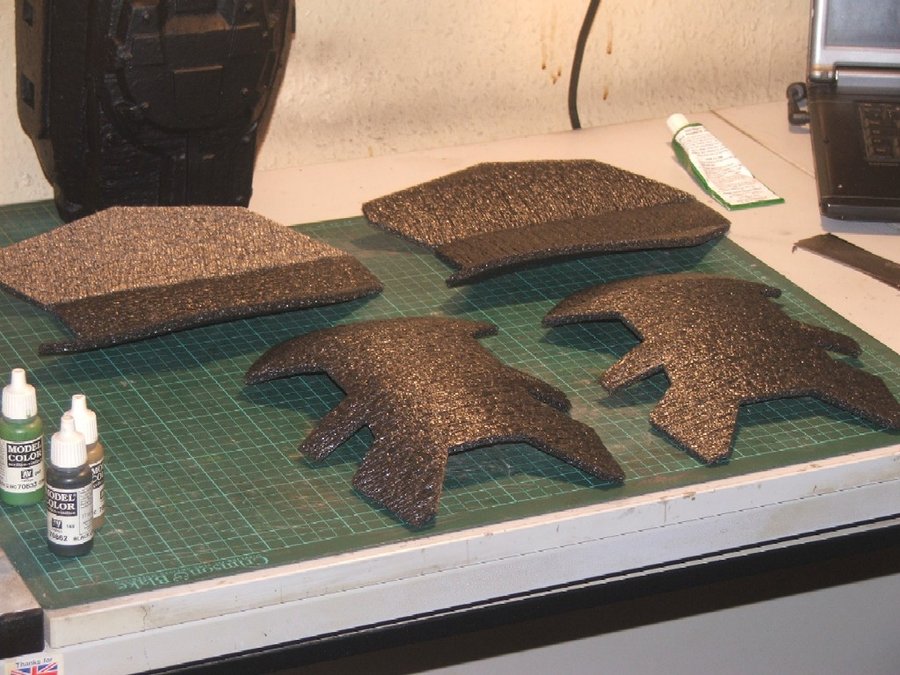 Hope fully I can get these to the same stage as the bicep today. Running low on glue ;-(

Southern Regiment
You sir are a master with the foam, I am very impressed with your creations. I really enjoy watching your updates keep up the great job, hope you get that glue problem solved we need more updates
M

Here's a VERY quick update. One of the two shoulder pieces just prior to final trimming, latex and paint. 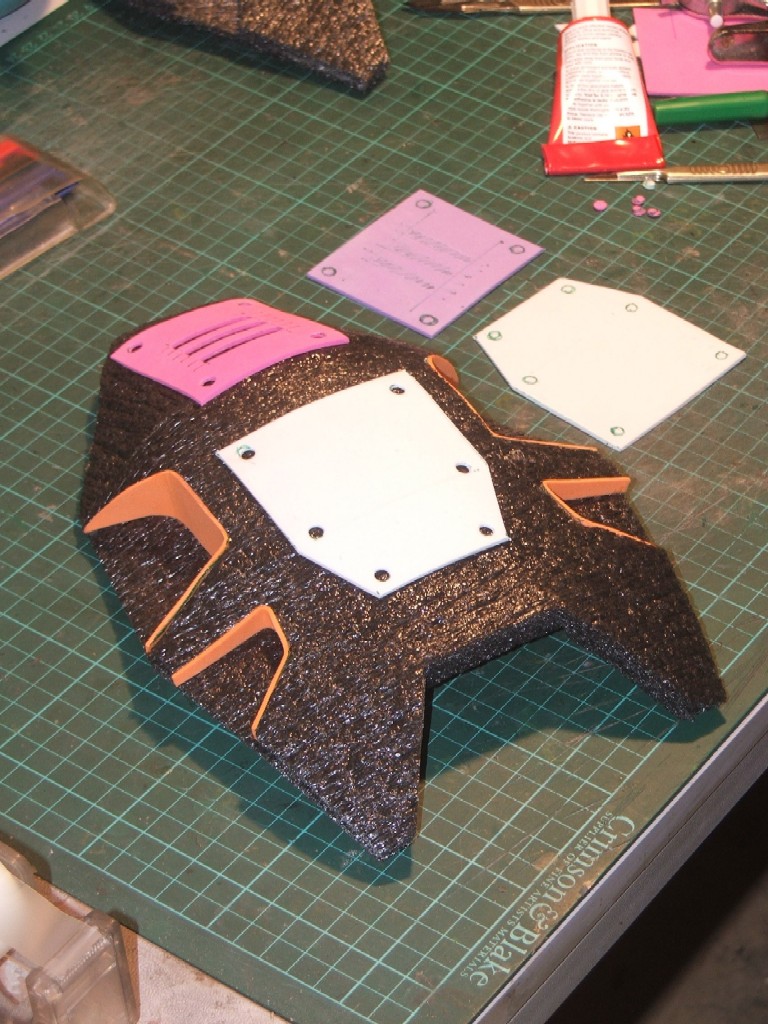 The forearms in progress and construction completed. They just need latex and paint to finish off. 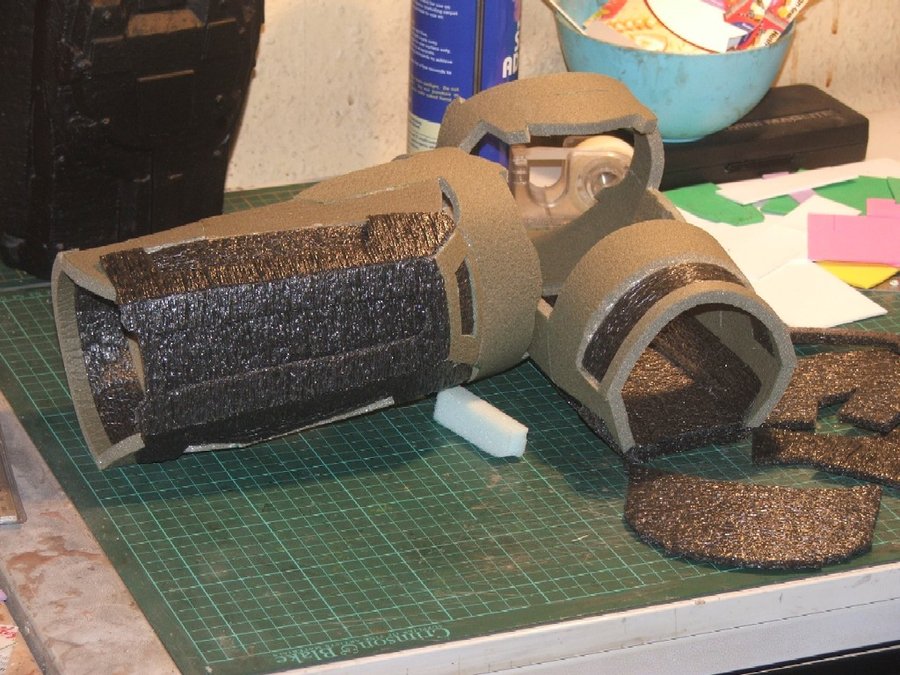 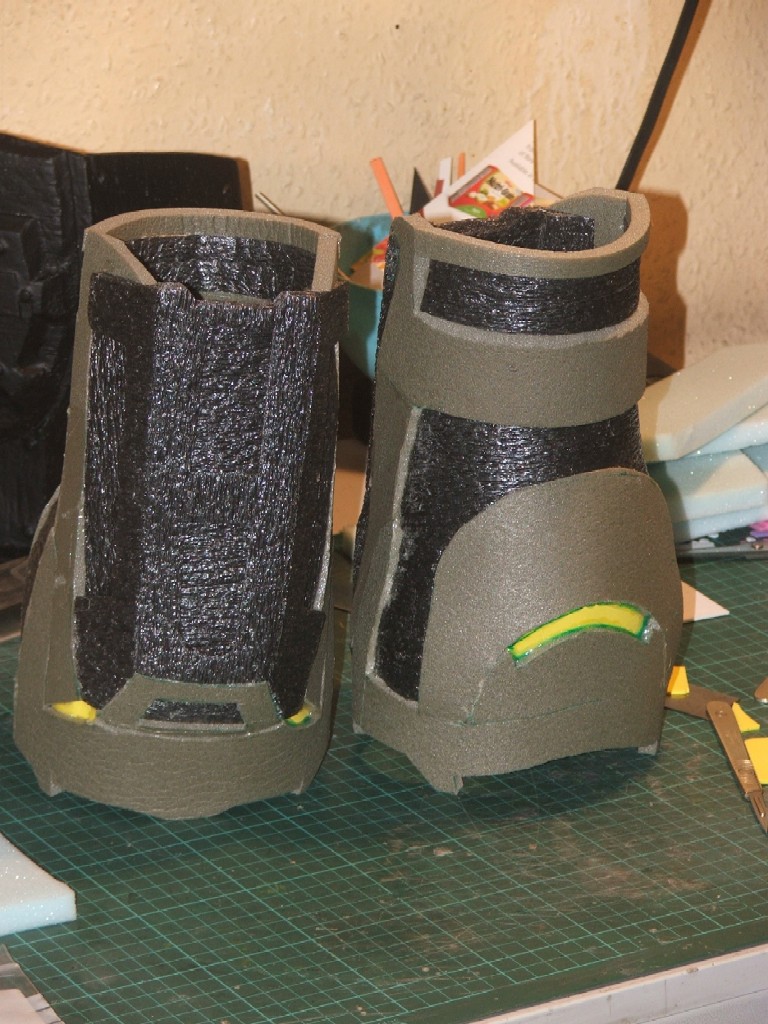 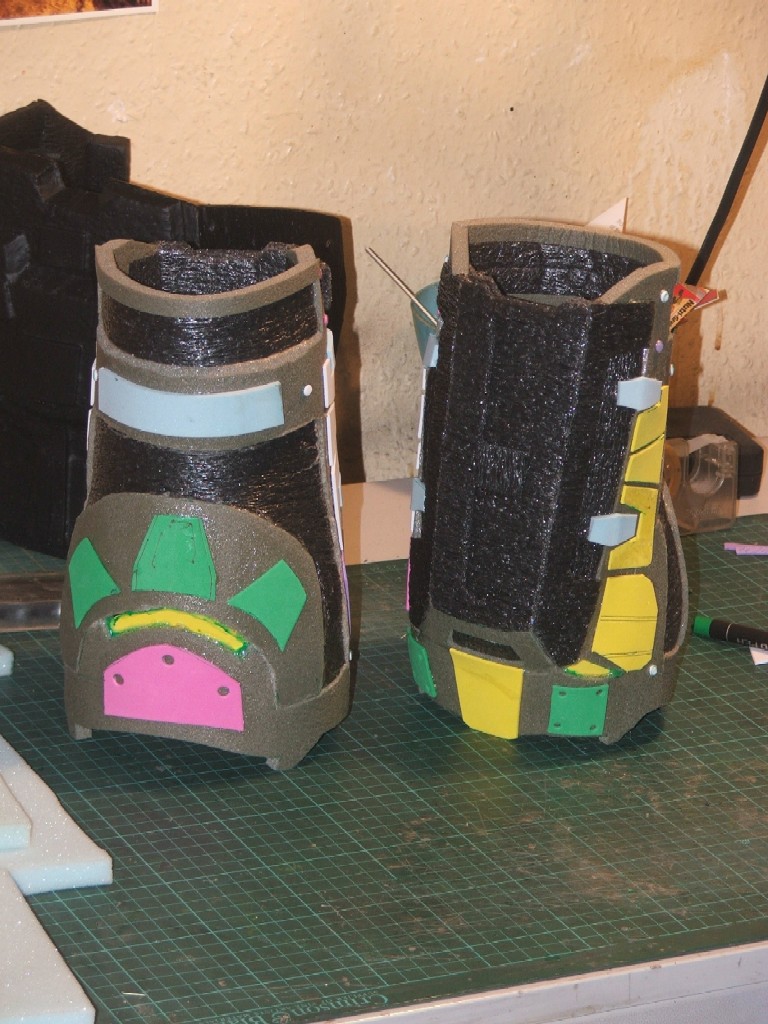 For some strange psychological reason I am putting off making the right bicep?! I should have made both together, go figure.

I really like how you detail your pieces by adding foamies. It seems like a relatively quick and simple but effective method of adding depth and layers.

I haven't worked with latex and haven't seen anyone use it in these forums. When you apply it does it only serve to bind a piece or does it actually add some rigidity to the piece as well? Would you mind describing some of the benefits and perhaps drawbacks with using the latex material?

Your build is looking great thus far. Keep her up!