Short update:
Detailed view of my abwrap
3mm foam with grey & black marine vinyl wrap super 77d on. The main pieces are a mix of glued together and elastic which allows for a TON of flexibility. Unfortunately I made mine a little small but I plan to redo it in the future. 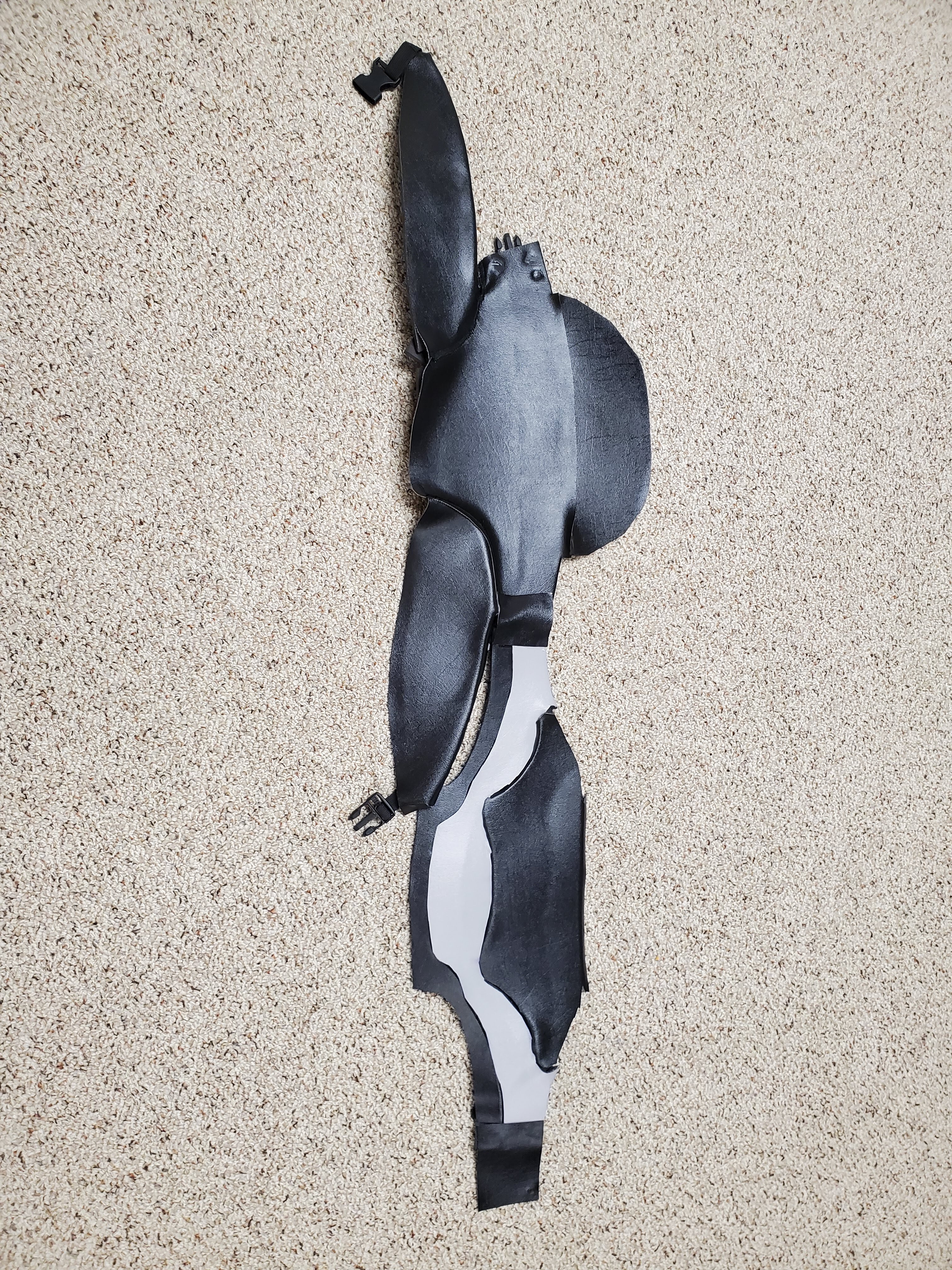 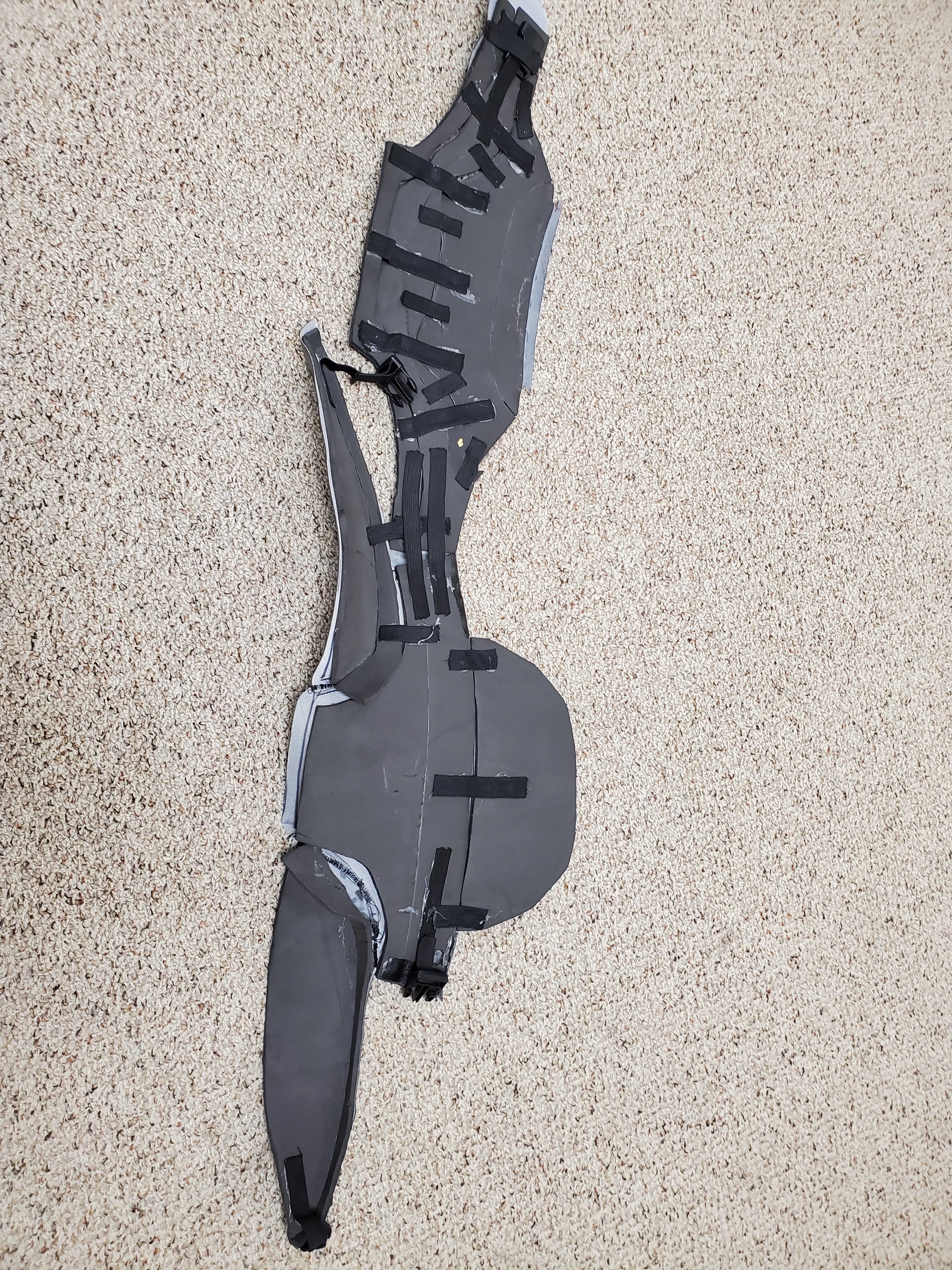 "HulPro" Upgrade:
Integrated a GoPro Session into my HUL unit for con video!
Very easy modification to the Skookum Props JFO files and allows for an excellent view of the convention! It's held on via magnets and is easily removable with the GoPro button being located on the bottom to start/stop the recording. Definitely one of the more fun upgrades I've done. 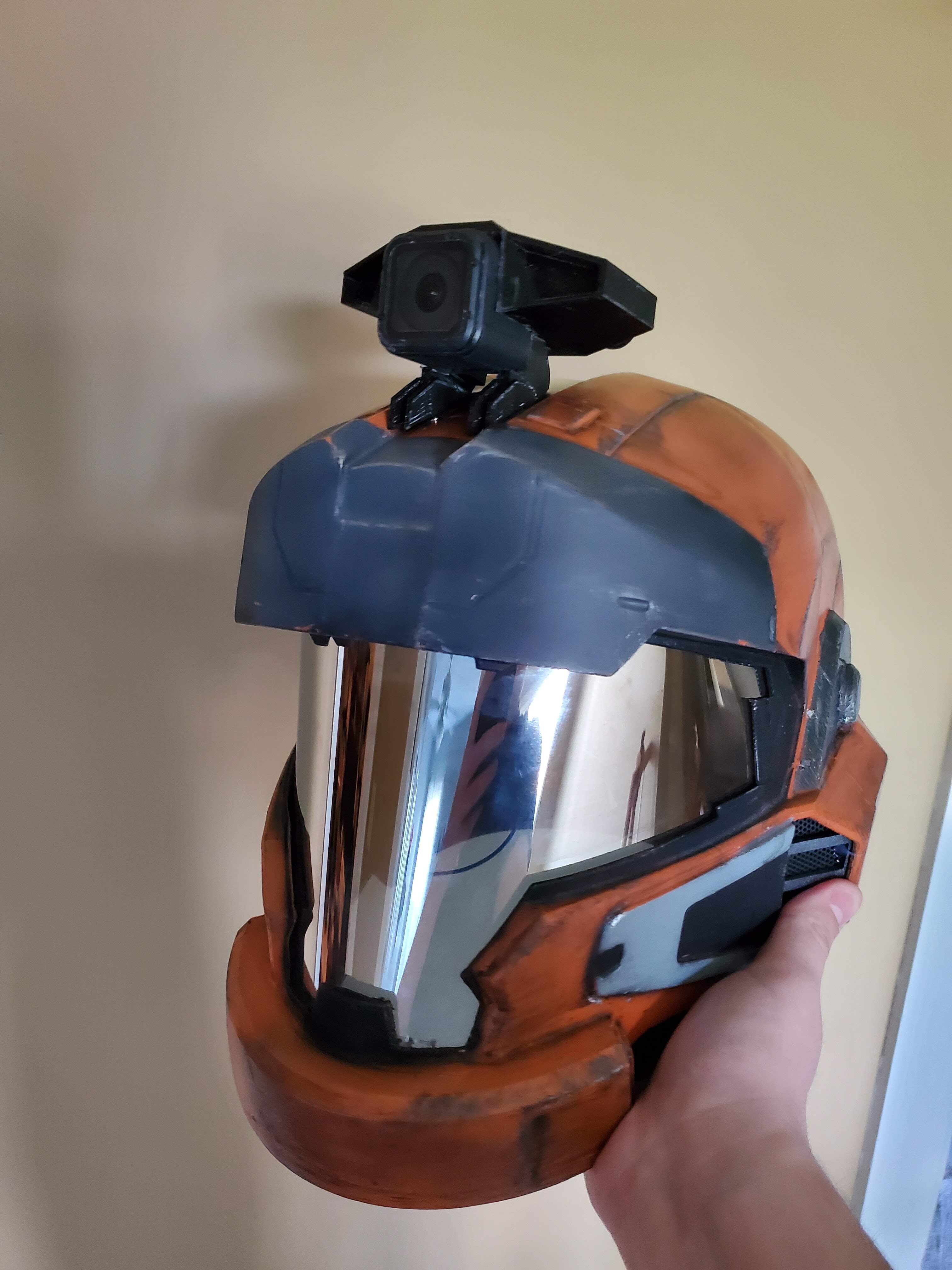 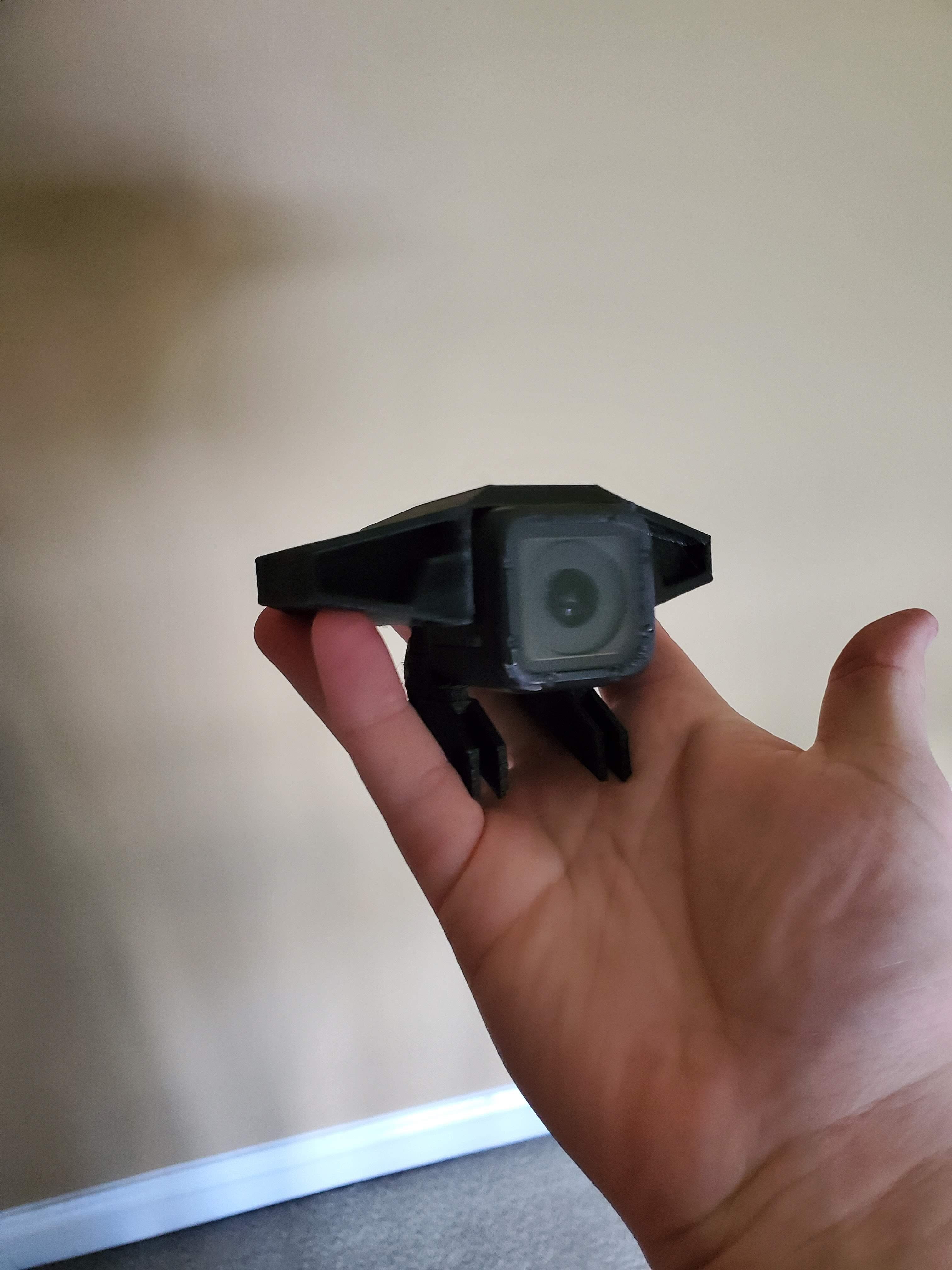 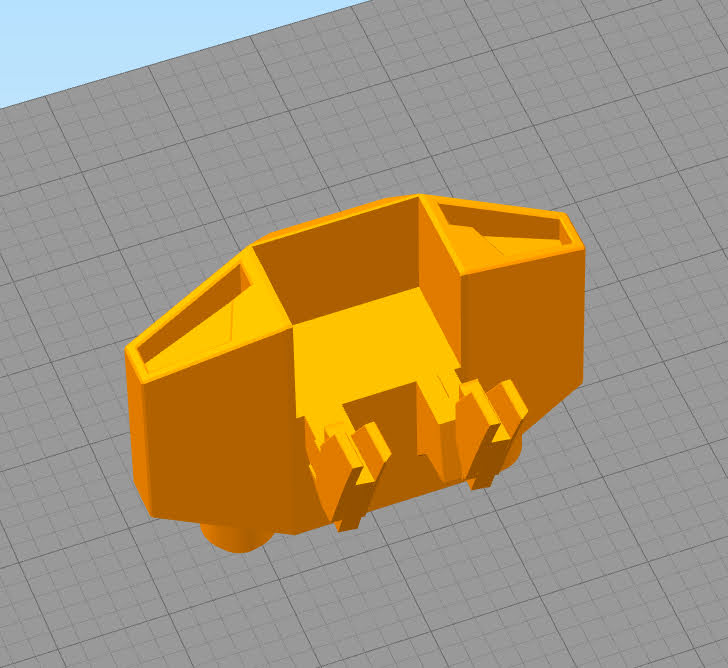 Time for more upgrades! I recently acquired a JFO cast from RYNO 666 and I'm going through the work of prepping it. The cast has a super neat urethane rubber neckpiece that I'm excited to get into working action. As seen it's a bit smaller than my current helmet which will help a bit with my current bobblehead issue. 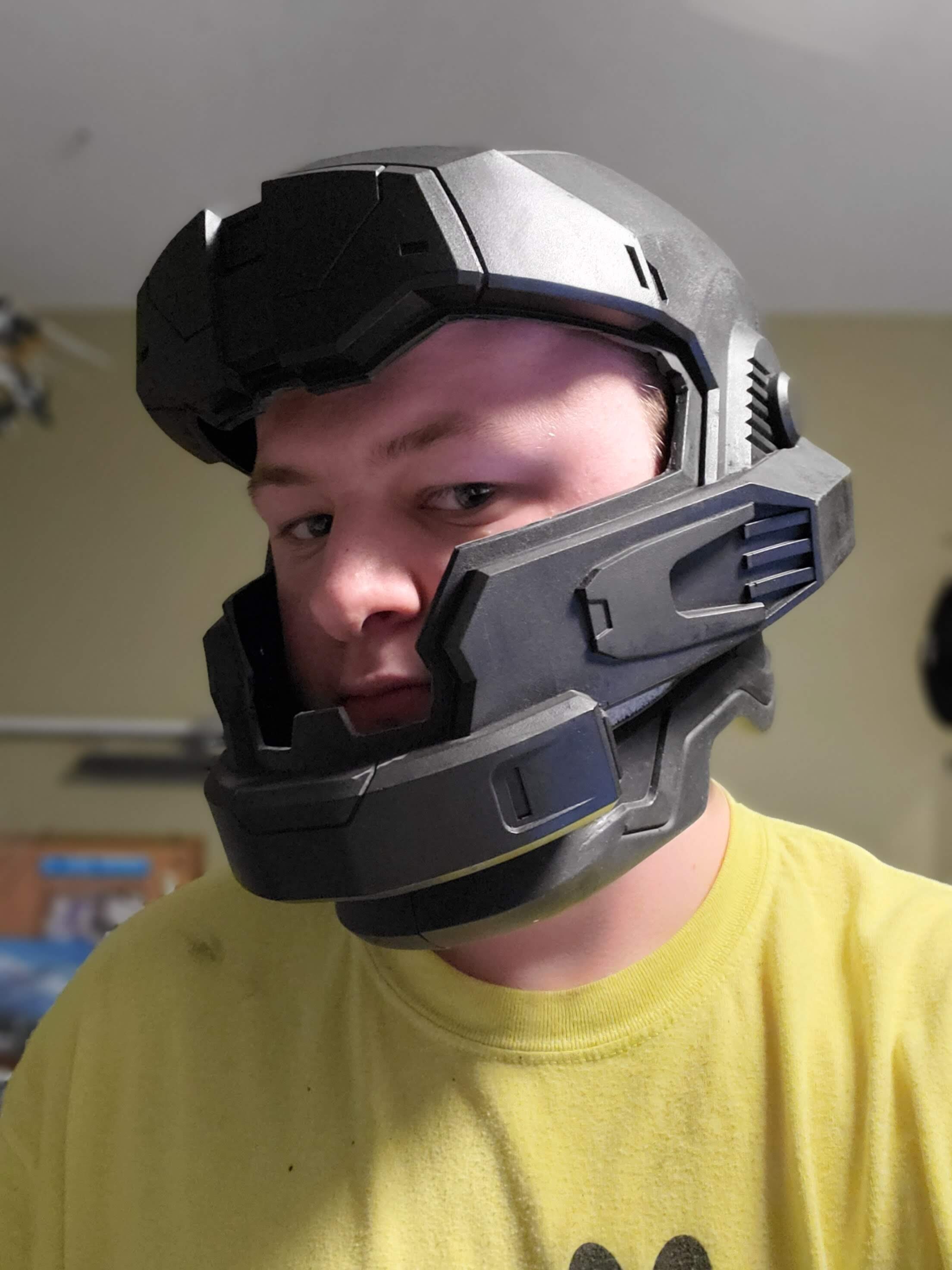 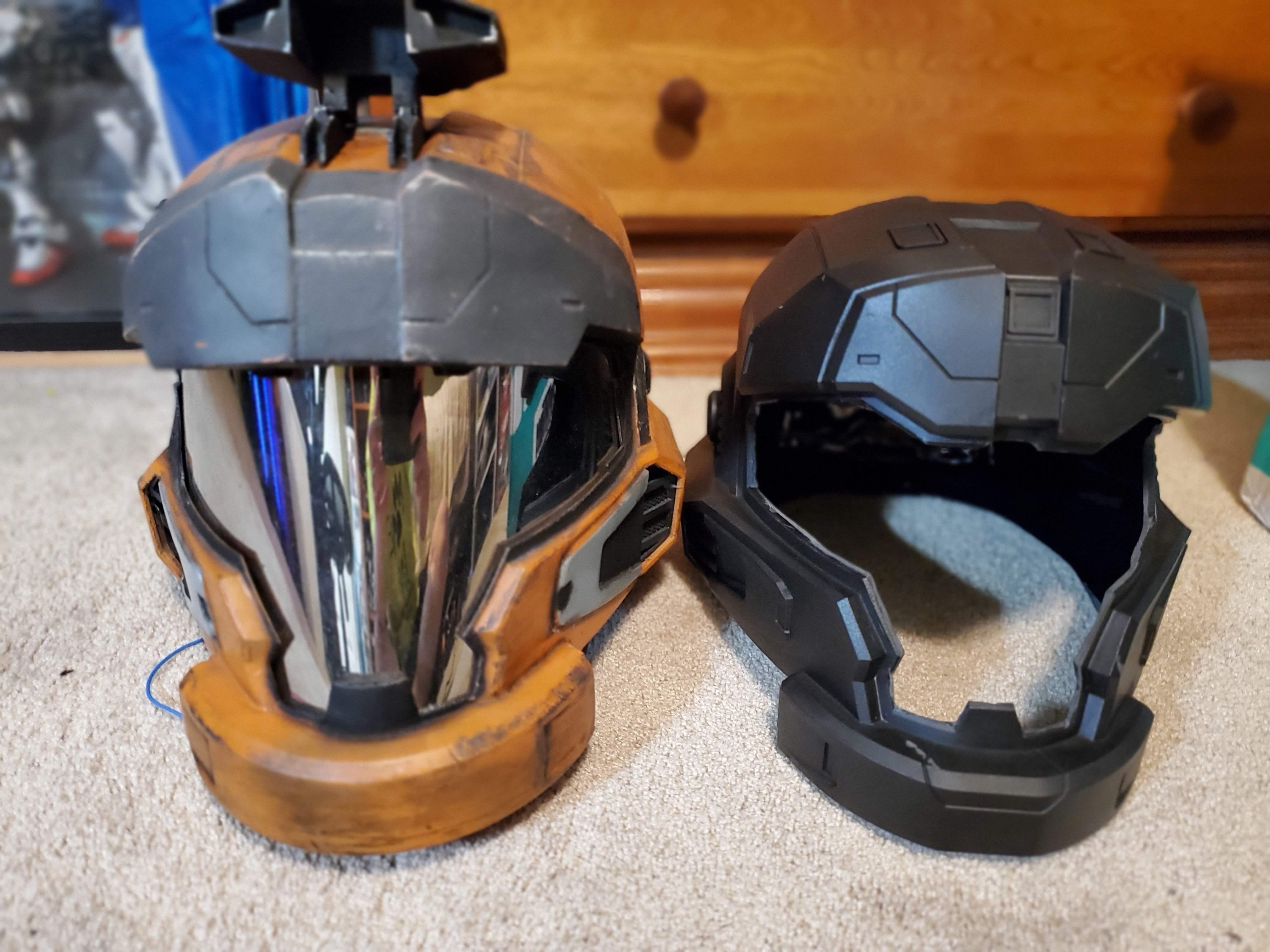 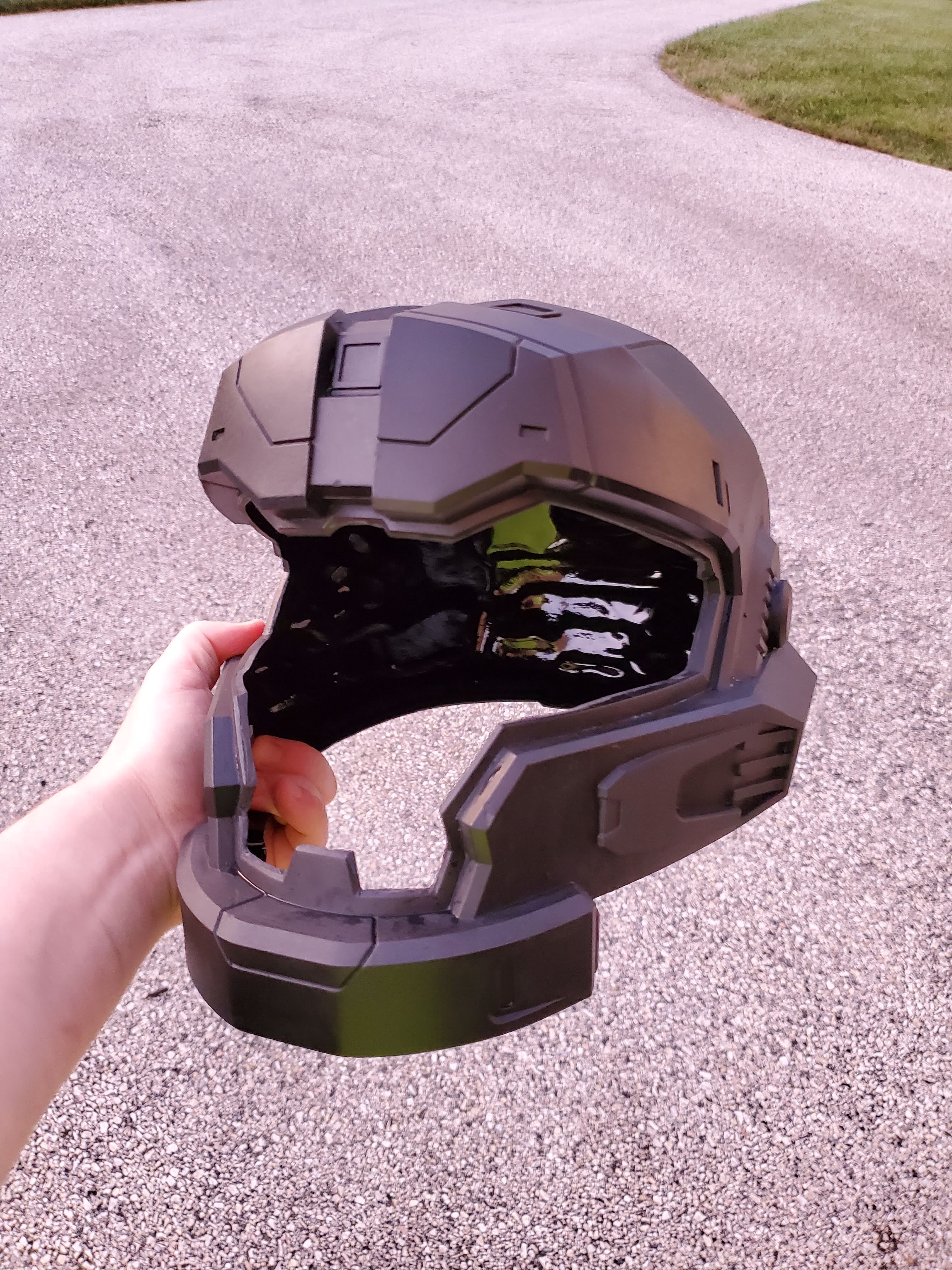 Woot woot! I just know it's going to be awesome.

It looks great and I love the attachment for the gopro. You'll be able to record a lot of great moments now!
E

Rock Lobbster said:
Edit: Main build is now complete!
I decided to do a fun quarantine project with the 144 sq ft of harbor freight I happened to have sitting around so my custom spartan was born! Playing Reach on PC again really brought back the desire to be my own spartan.
View attachment 290105 View attachment 290106
So far I have the shoulderpads, biceps, chest, and abwrap are complete! The chest was an absolute pain and probably took a week just by itself (the back sucks). I also decided to do a foam abwrap as an experiment and I think it might work out?
Click to expand...

Looks like it is coming along great lobb
E

Hey. Are you gonna be repping this at T2E2? Can't wait to see it in person!

Ender Of Time said:
Hey. Are you gonna be repping this at T2E2? Can't wait to see it in person!
Click to expand...

Twin Tiers? It will be with me!
E

Sweet! It'll be great to see you. Always do solid work and can't wait to see it

Completed a few upgrades in time for my local Halloween Parade tonight!
Magnetic Mounted AR
First off is the magnetized AR, I have 1 1" neodymium magnet located inside the Nerf AR and 2 located in the back of my chestplate. This securely holds the prop to my back and frees my hands while in suit! (Yes I can reach it on my back) 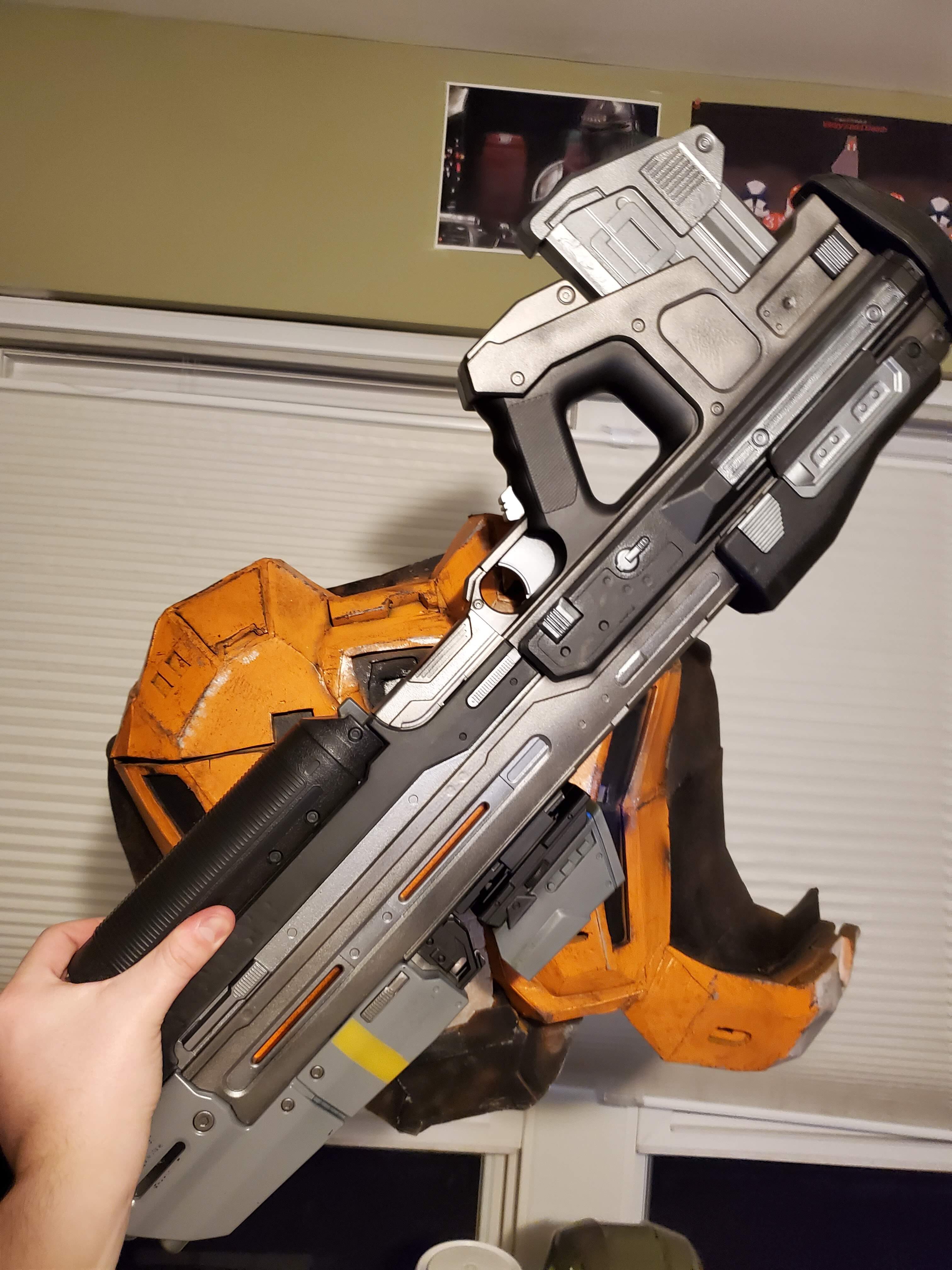 Thigh Mounted Magnum
Next up is more magnets! The other 1" cube magnet was used in my thigh to further reinforce the magnet mount location. The magnum is secure using magnets in 2 locations and is a great prop to have to hand out for photos 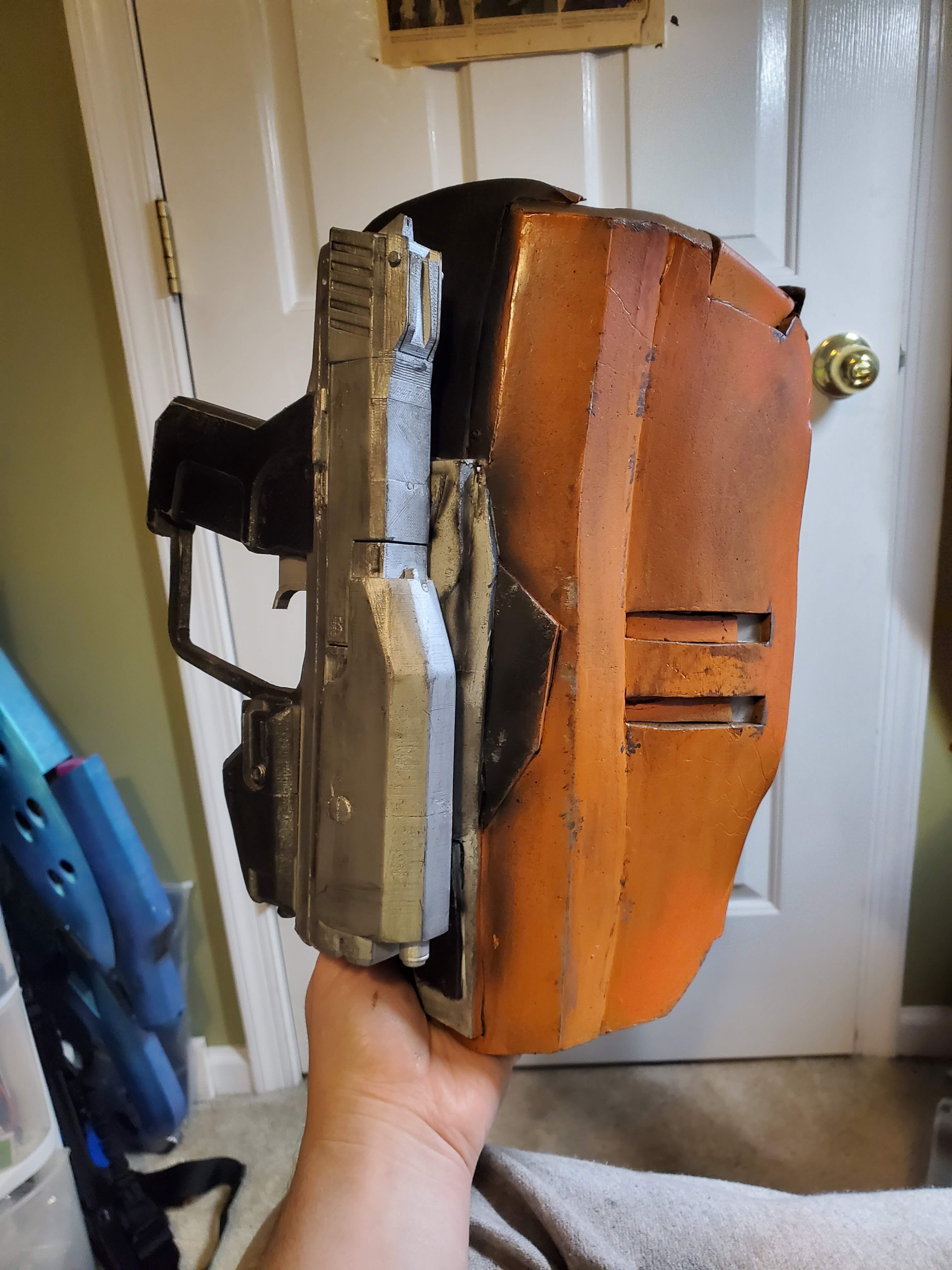 Voice Amp Storage
Shining a spotlight back on those lovely Reach Tac/LRP pouches I found out they can (barely) hold my voice amp in my chest! This still gives me 2 pockets to store various other goodies in but having this amp in my chest drastically increases my speaking capacity while the helmet is on.
This is a wireless voice amp so the mic is velcro'd in my helmet. 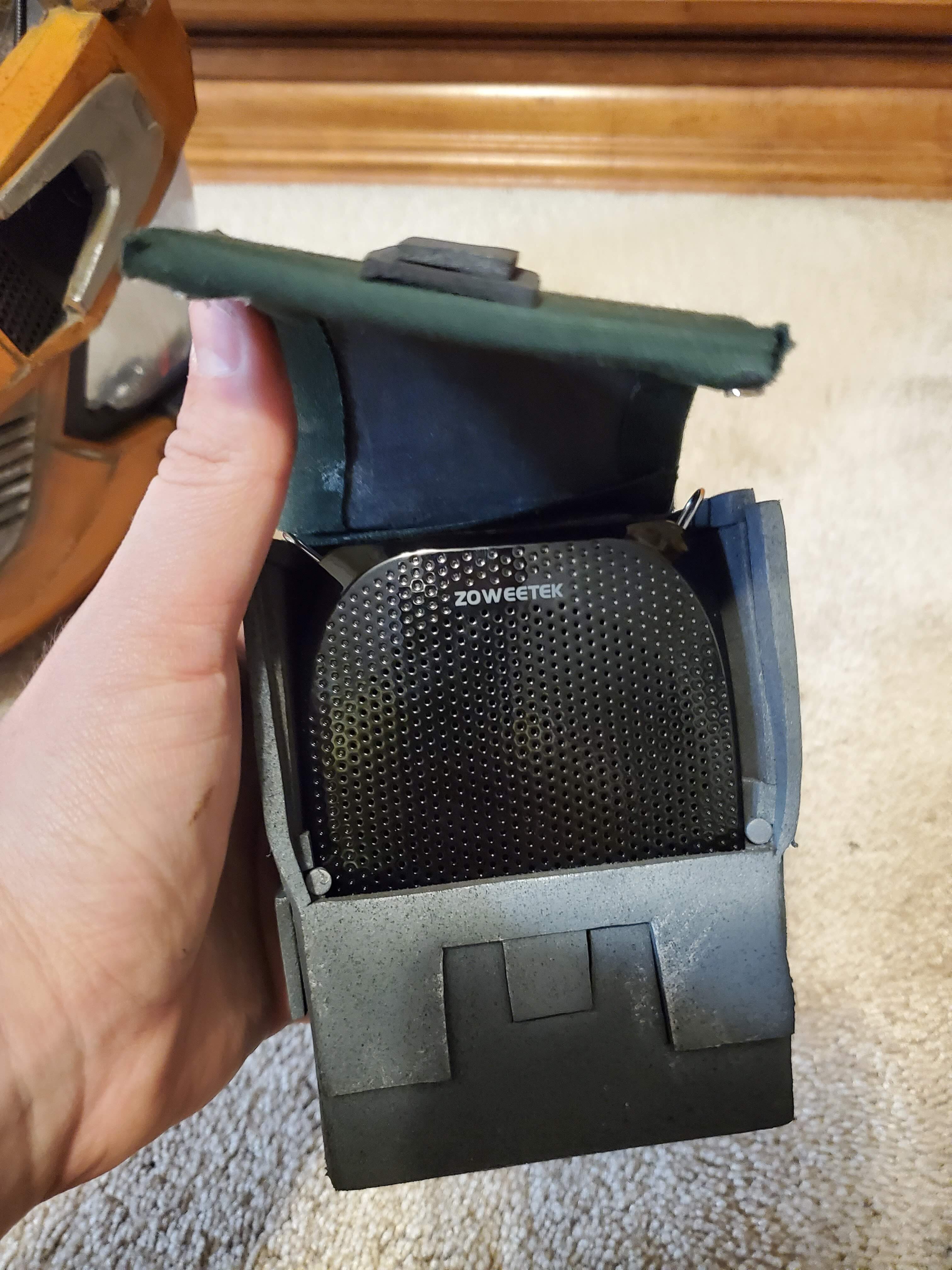 Canadian Regiment
Now you're really making me want to make the same pouches. Been wanting to add a voicebox so people can actually hear me.

NewBrody said:
Now you're really making me want to make the same pouches. Been wanting to add a voicebox so people can actually hear me.
Click to expand...

Already was going to print your com tacpad, might as well make your pouches now too ¯\_(ツ)_/¯

Bukkit
The final addition (for now) is my resin cast helmet by RYNO 666 !

First I cut off the material infront of the visor for visibility and a few other sections to allow for ventilation through the helmet. Also used a bit of bondo to smooth out the seamline from the 2 part cast. Next I put a coat of Rustoleum sandable filler primer on as a base and gave that a light sanding when it was dry. following that I applied my base coat matching my armor 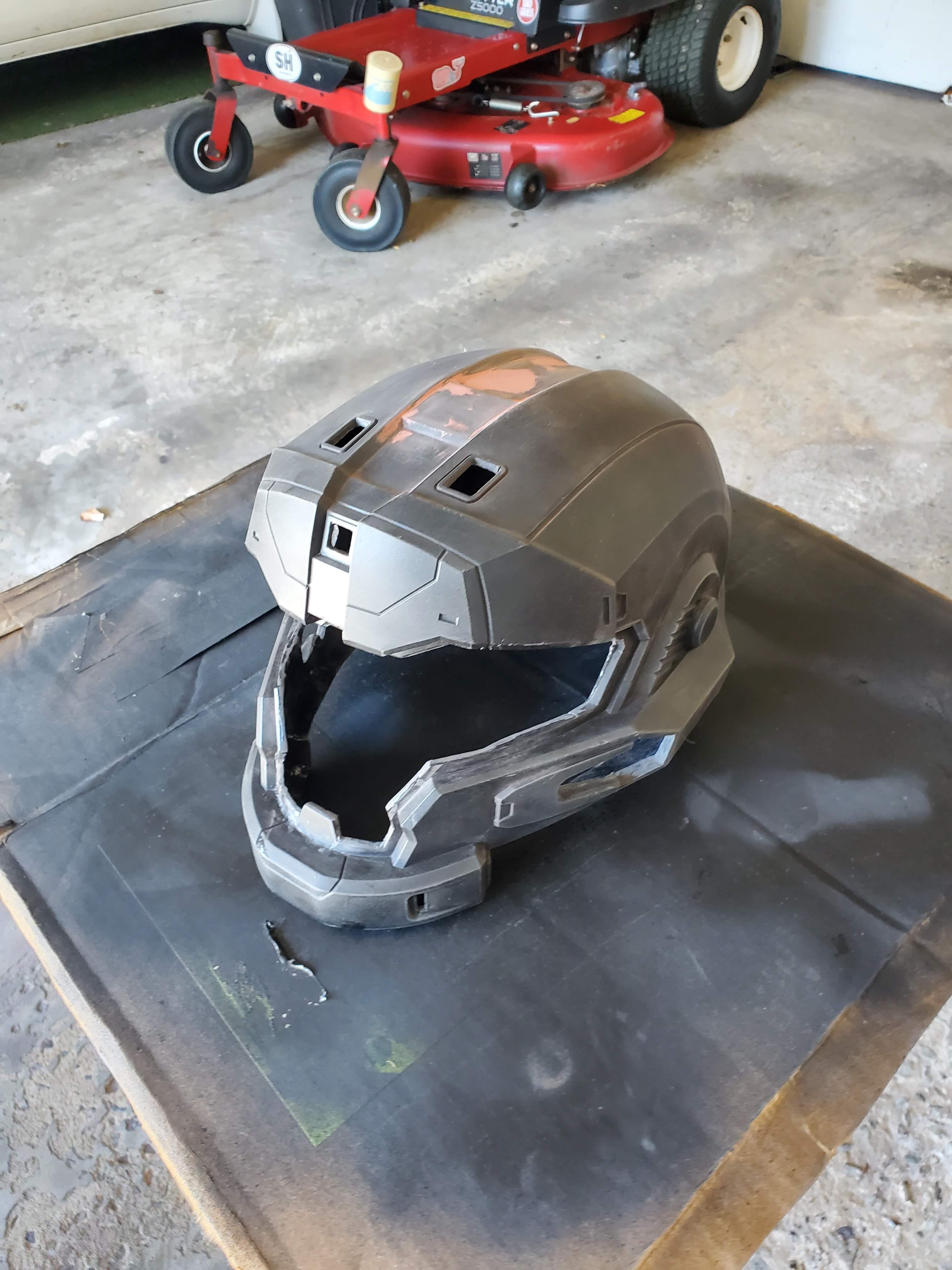 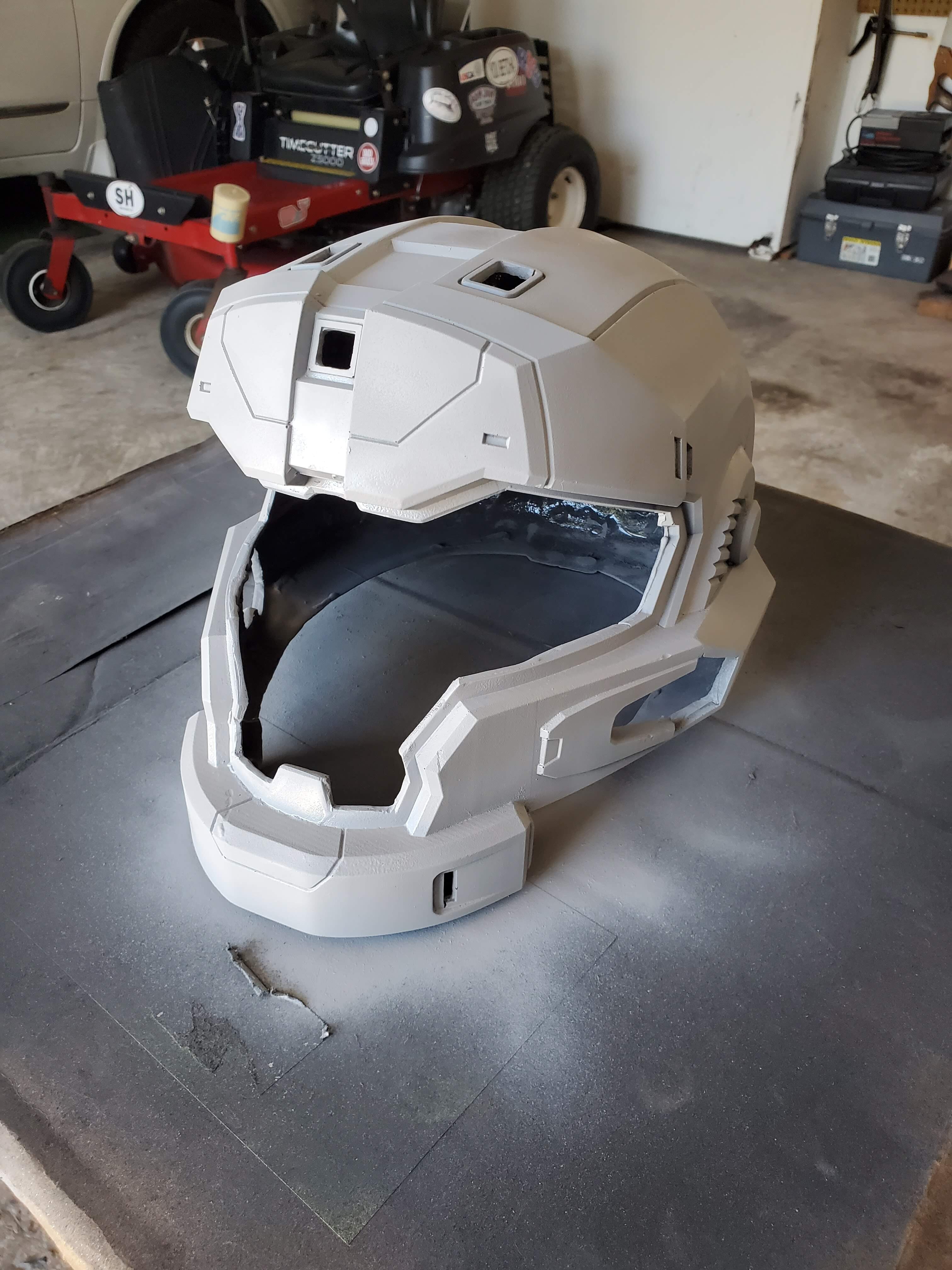 Secondary colors and detail painting time! I used a mix of black and a darker grey to get the "brow" coloring with a standard black along the visor rim. Gunmetal on the side panels and a light grey for my secondary colors along the cheeks! Then came the dreaded step... the weird JFO markings, the bane of any JFO wearers existence. Absolutely awful to do but they look so nice you can't just skip them! 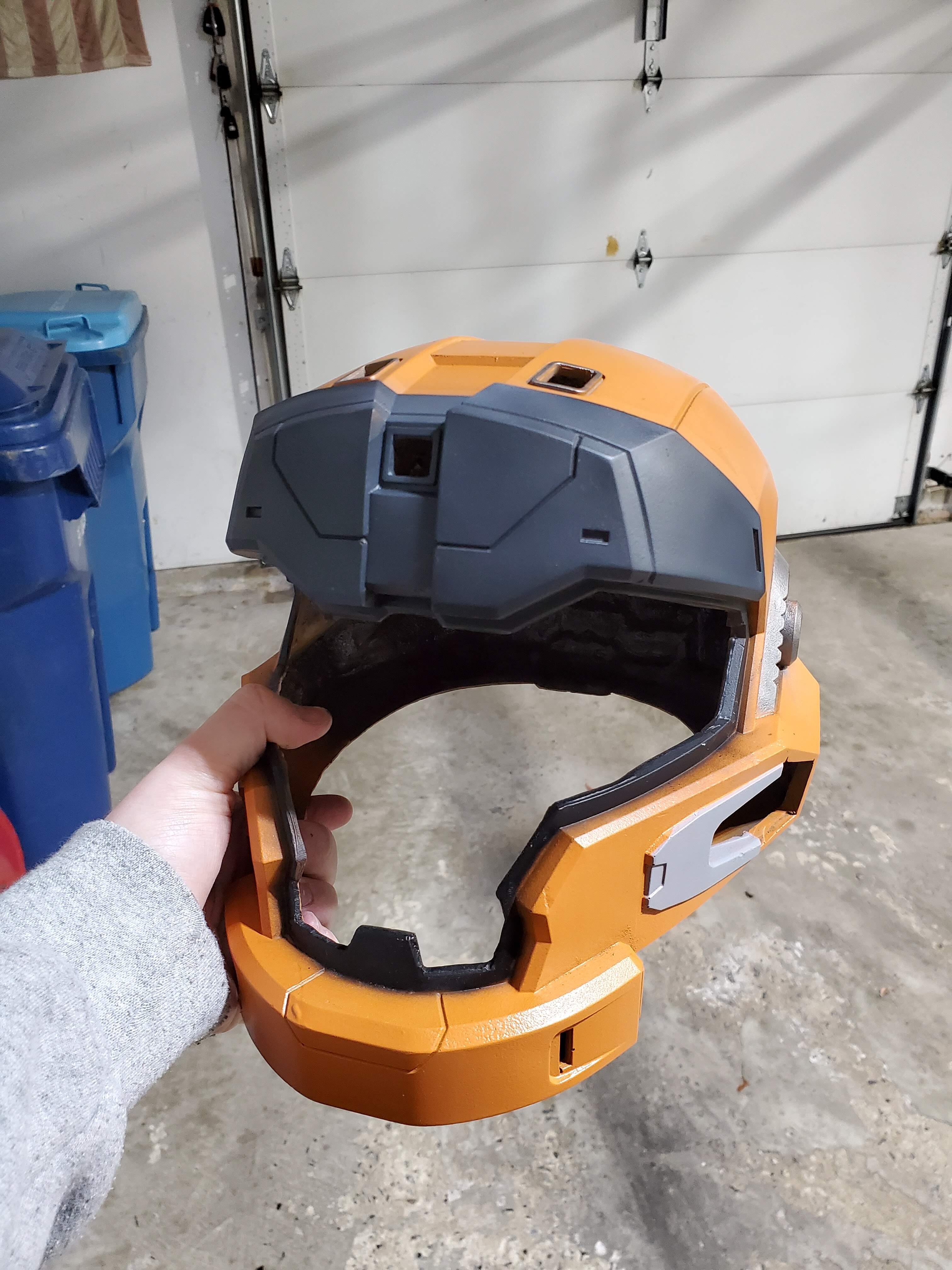 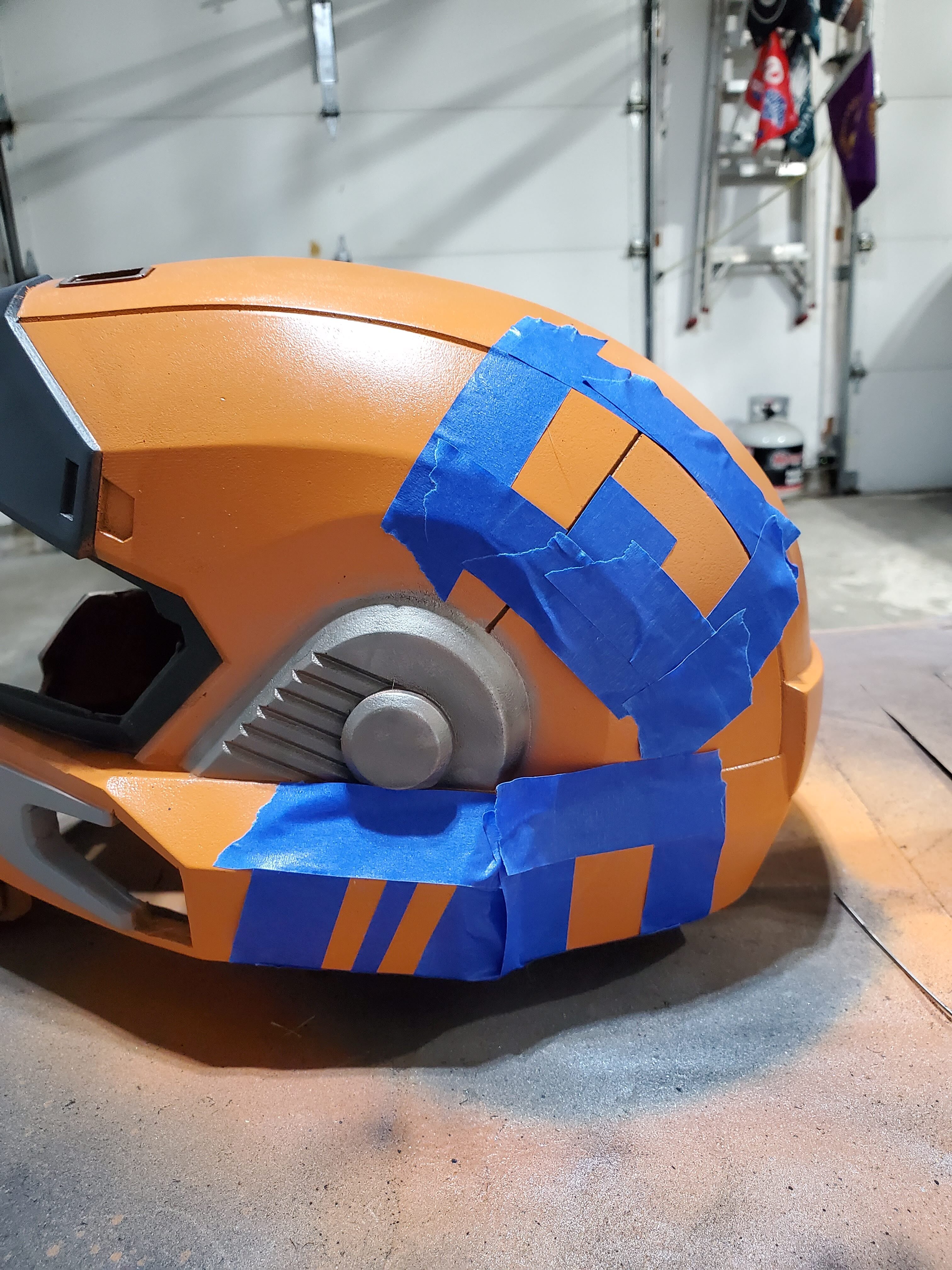 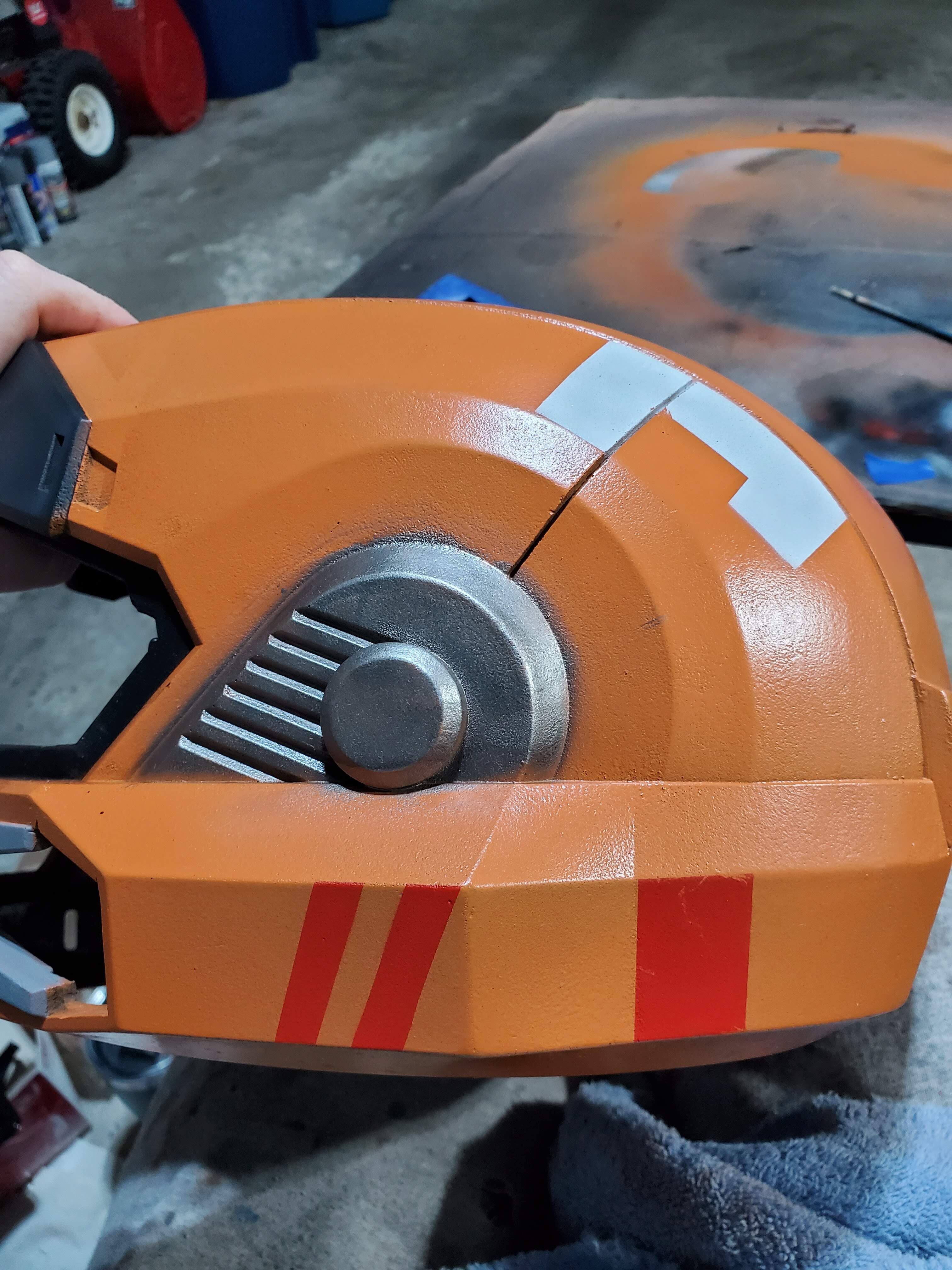 And there we have the main painting completed! Next up is our electronics and blackwashes.
I installed a total of 4 fans with a rechargeable battery in the rear of the helmet. The 2 top fans have custom eva foam ducting that allows them to vent out the top. A big thanks to CrimsonViper97 who came up with that beautiful design. The mesh is plastic meshing with a breathable black fabric super 77d behind it. Threw in the helmet padding included in the kit, velcroed the visor and boom! We have ourselves a clean JFO. 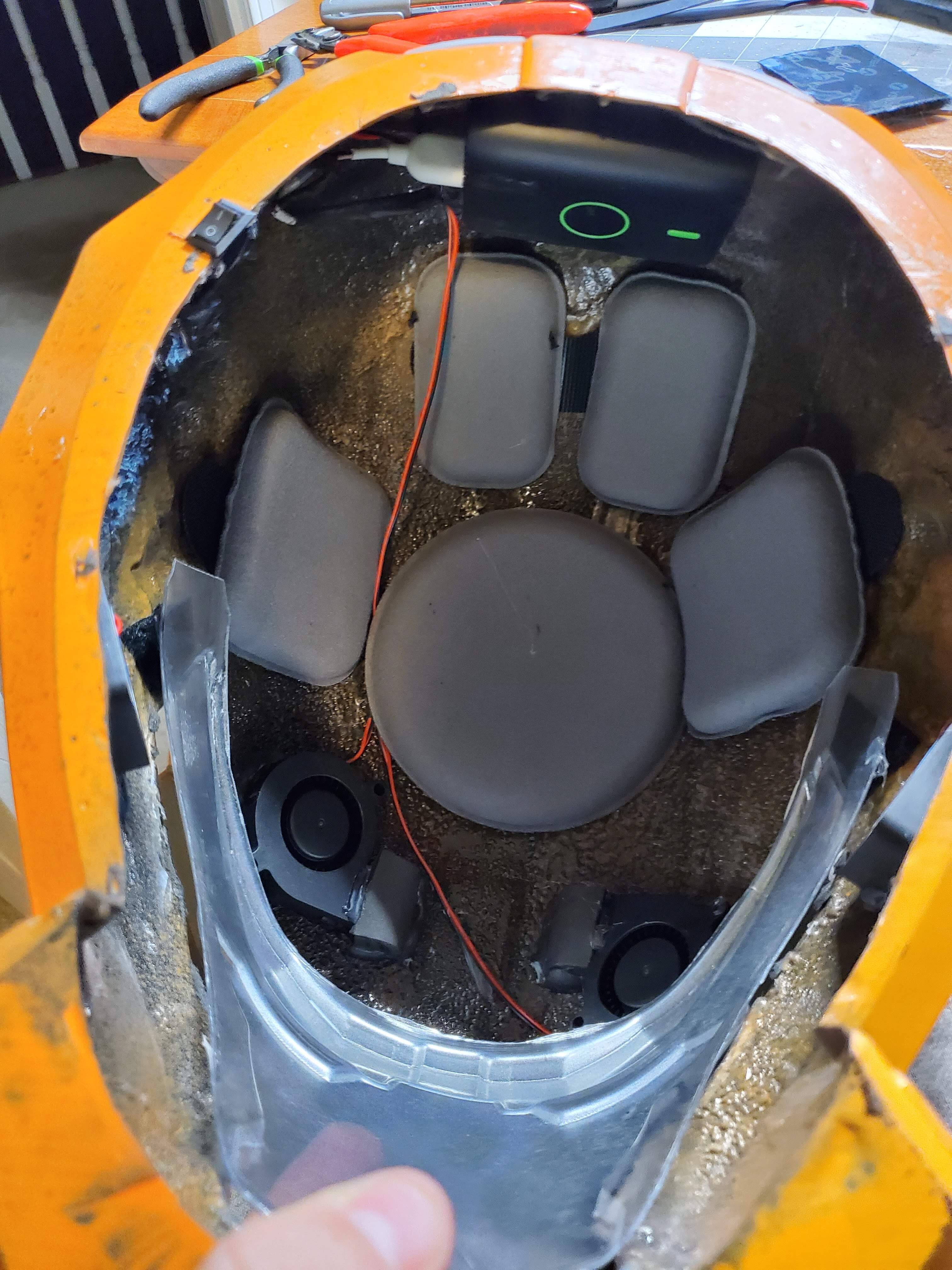 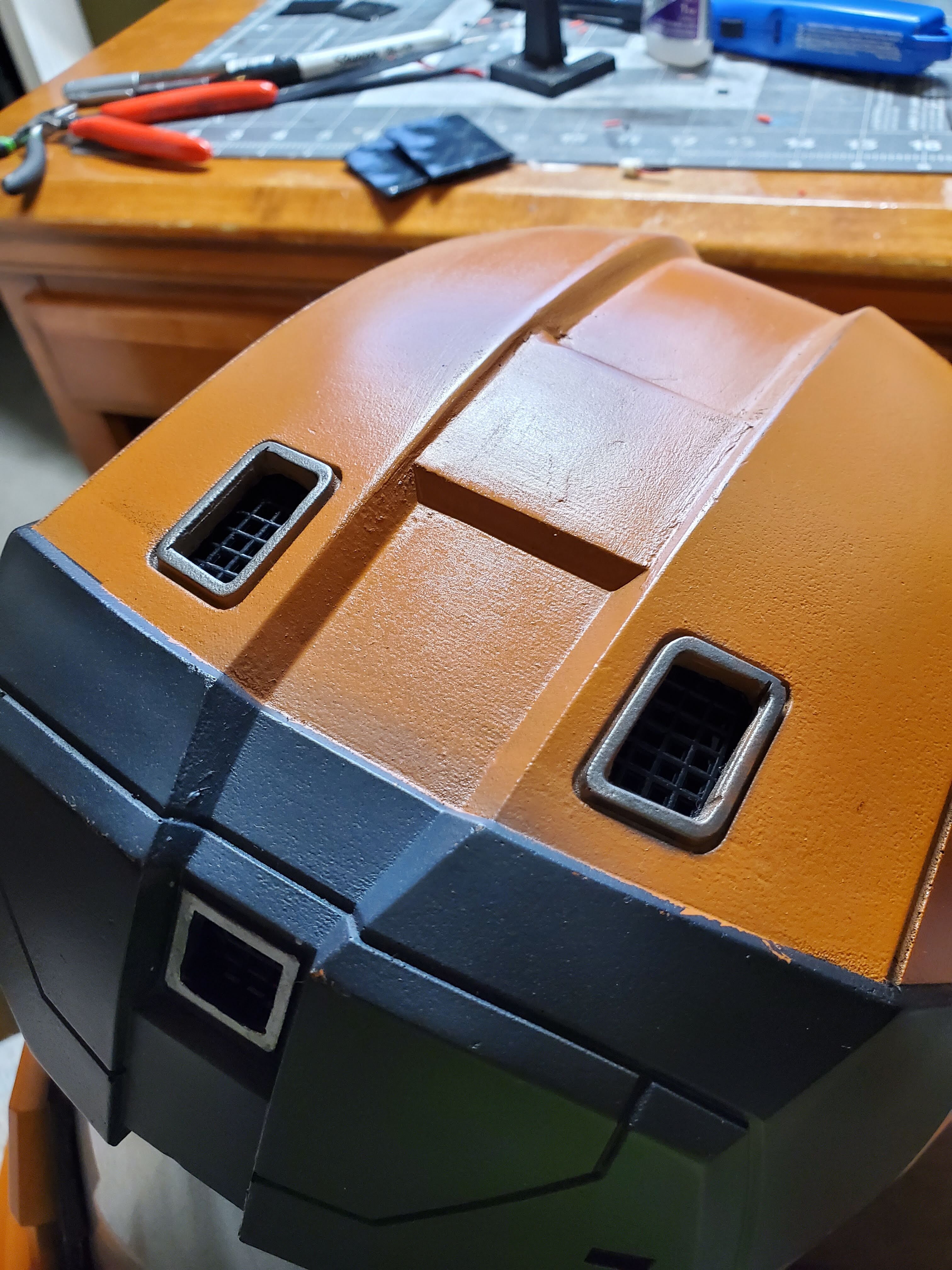 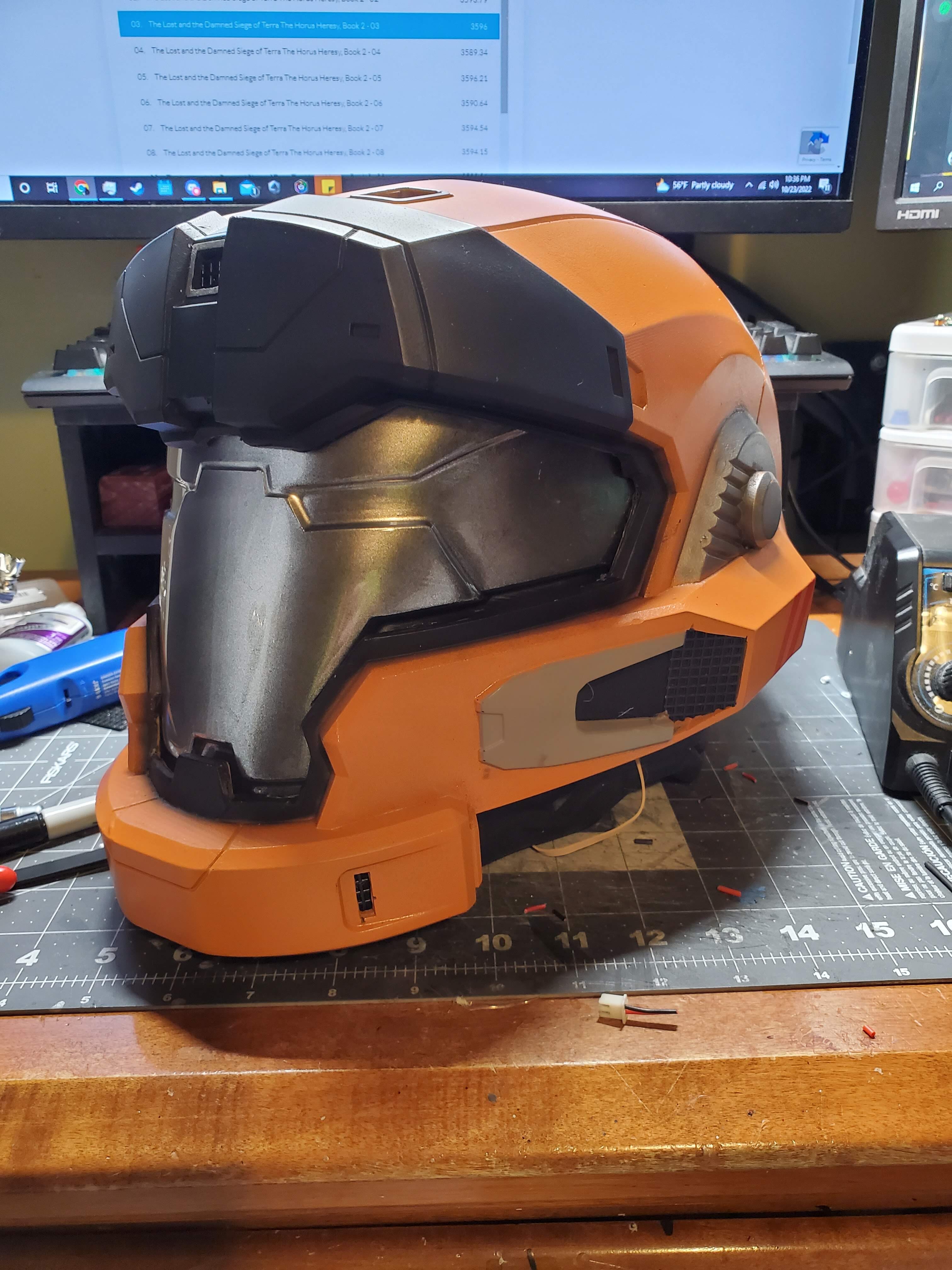 Its the final stageee bada ba ba, bada ba ba ba
For the final paintwork I mixed an olive green, brown, and gunmetal to recreate the weathering shown in Reach along with hitting select edges on other parts with a silver. The rubber neckseal was also rigged with some rubberbands and a strap that goes over my head. There is a magnet that attaches the 2 halves in the front to put it on. When that sits ontop my existing neckseal it really makes quite a good look! 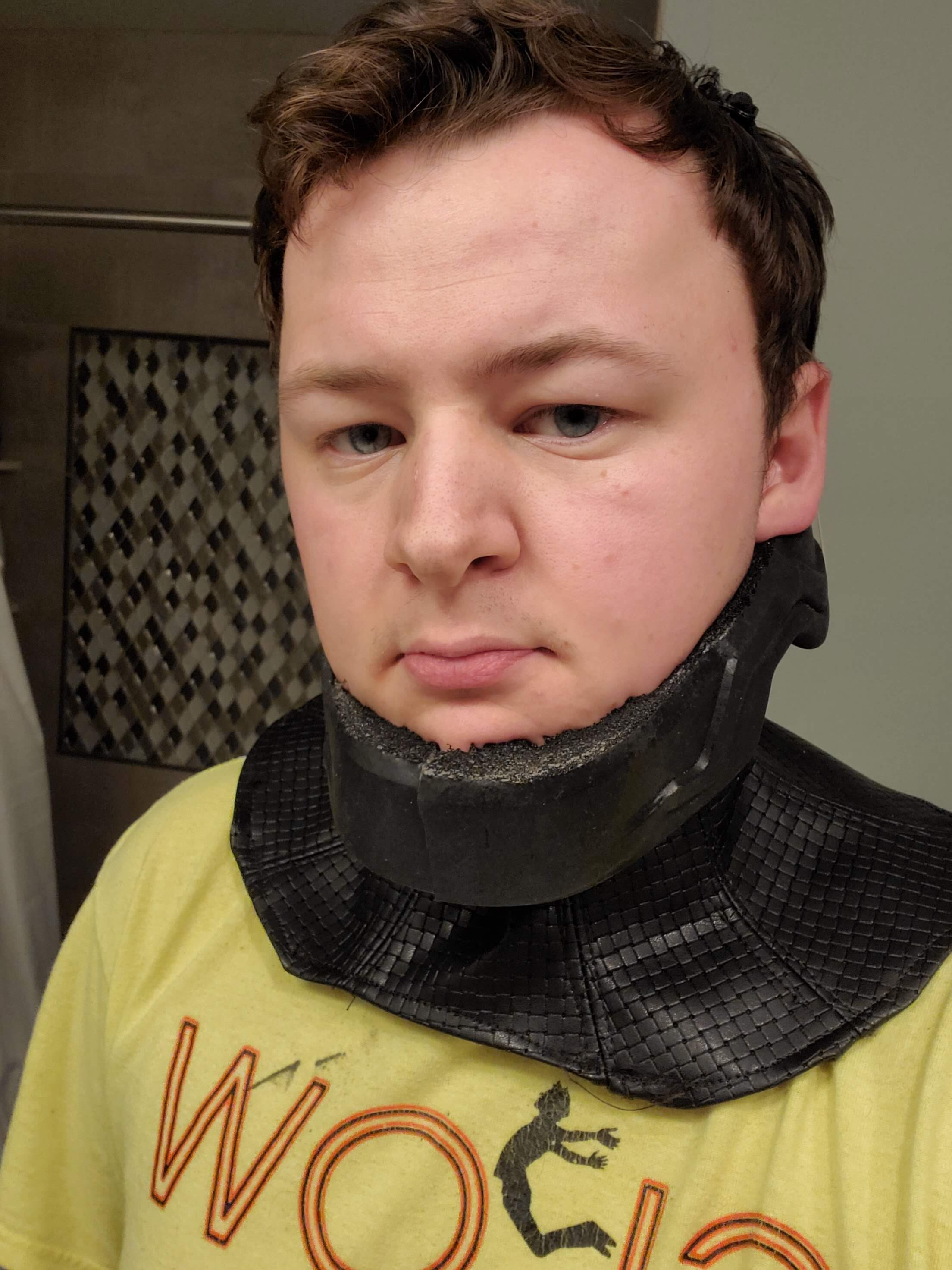 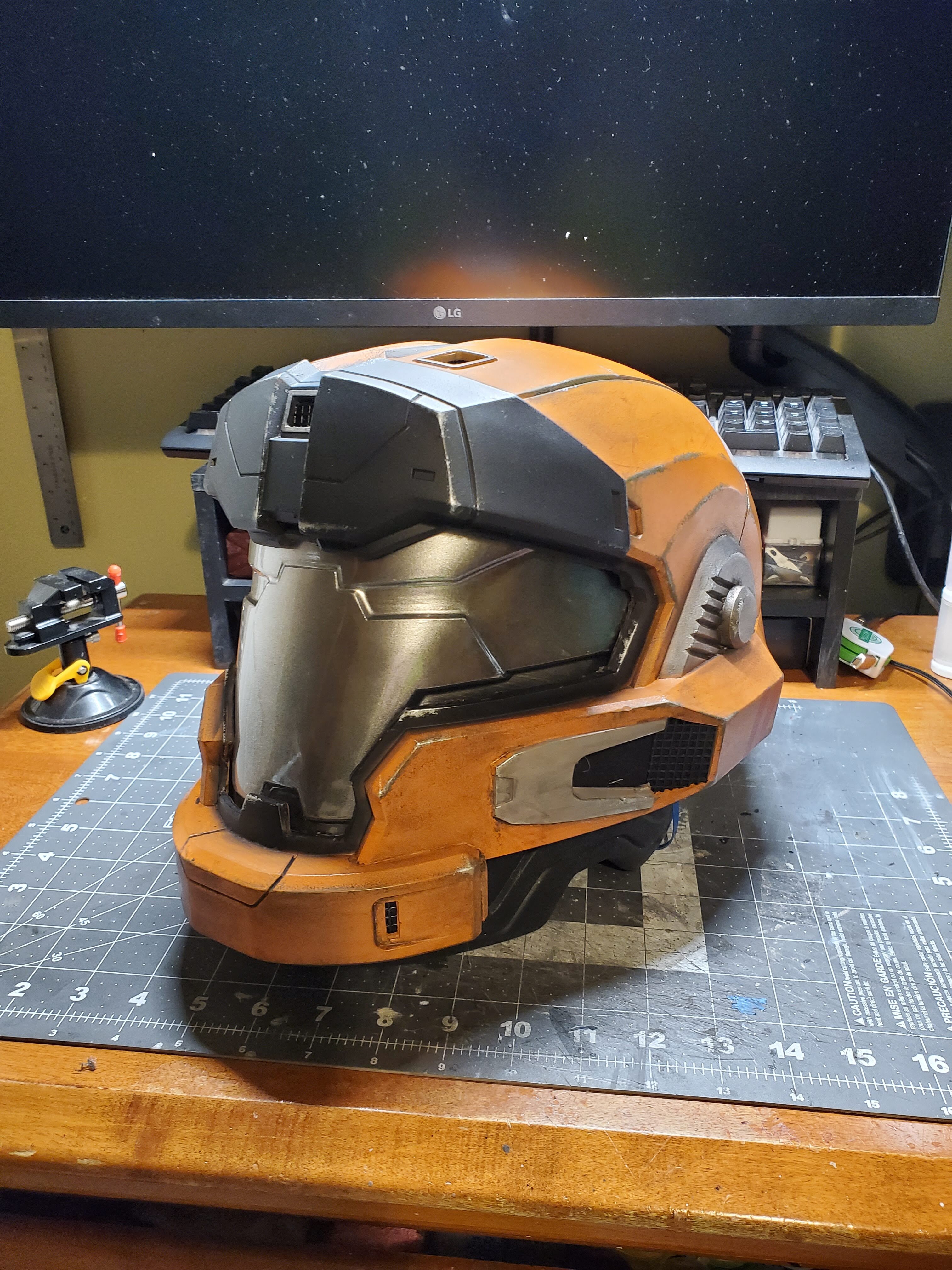 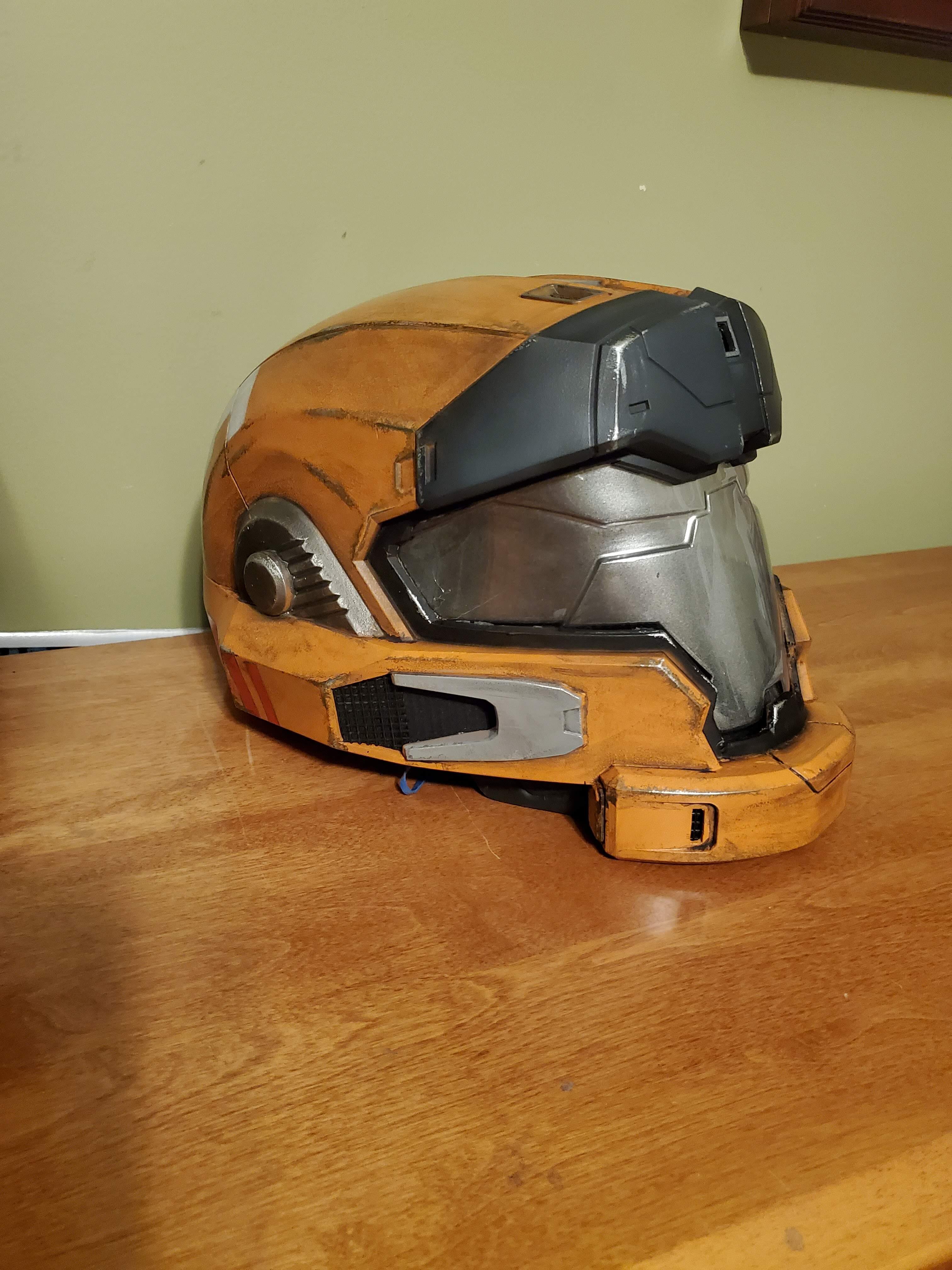 Its time to get that spartan rolling for Halloween Parade Part 2: Return of the Orange Spartan!

Do you have details on the battery bank you have in the helmet? I currently have an umbilical cord from my helmet down to my central battery bank and that is one thing I want to change up.

MrJamin said:
That helmet turned out absolutely stunning Rock Lobbster! (and RYNO 666 for the cast)

Do you have details on the battery bank you have in the helmet? I currently have an umbilical cord from my helmet down to my central battery bank and that is one thing I want to change up.
Click to expand...

I've got one of these!

My bucket is no longer bald!
Added magnets into the top of the new JFO cast to hold my Hulpro (GoPro HUL attachment) for the con this weekend. 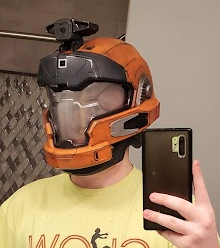 My current visor is a bit see through so I decided to try my hand at chroming the 2 others I had from Ryno (a huge thank you again). My airbrush was unfortunately not having a good day so they're a bit rough around the edges.
First used a plastic polisher to buff it up nice and then sprayed light coats of spaz stick mirror chrome. Helmet has velcro to hold in the visor so it is easily swappable.
Pleased as punch for my first attempt at this sort of thing. 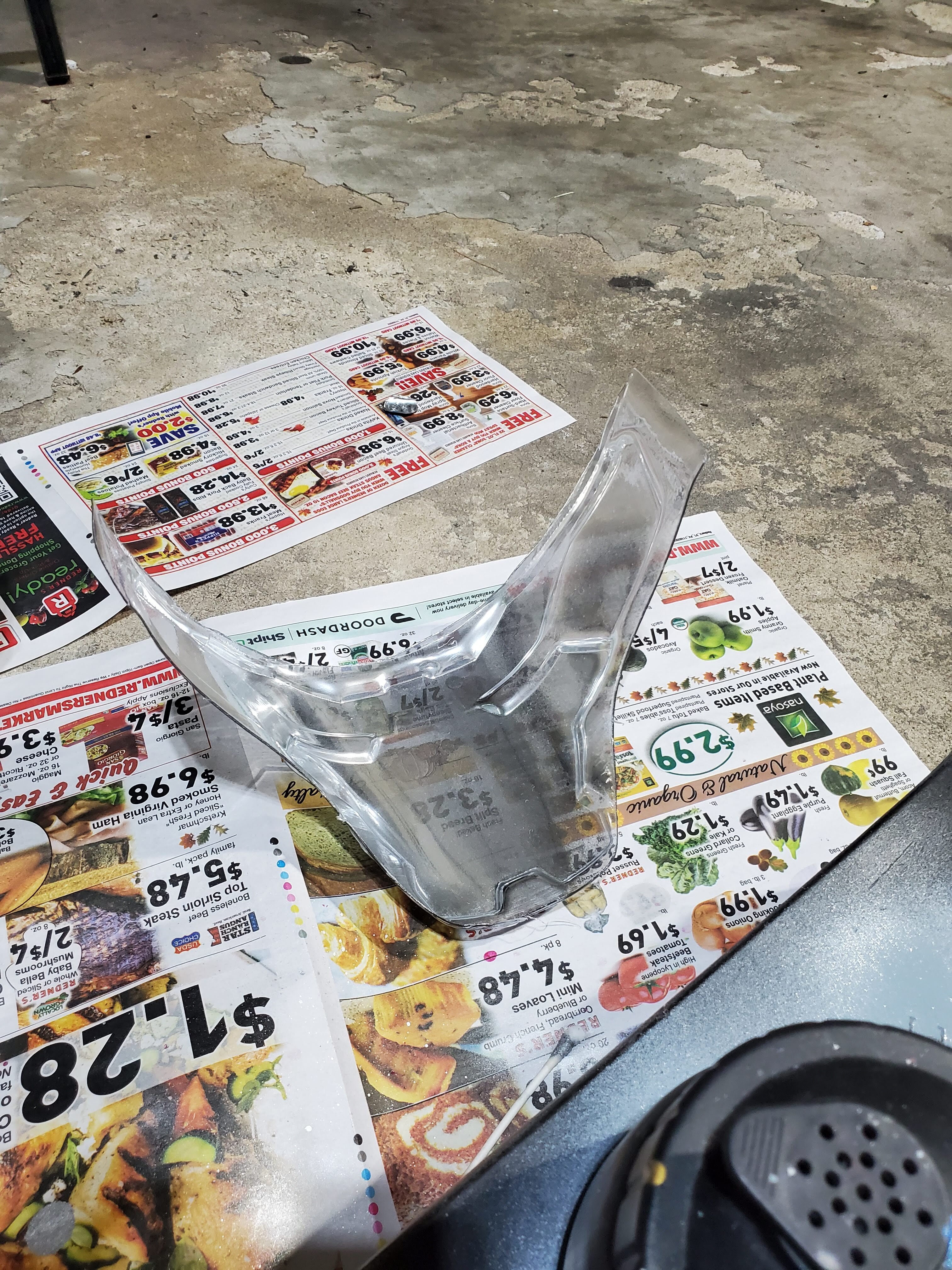 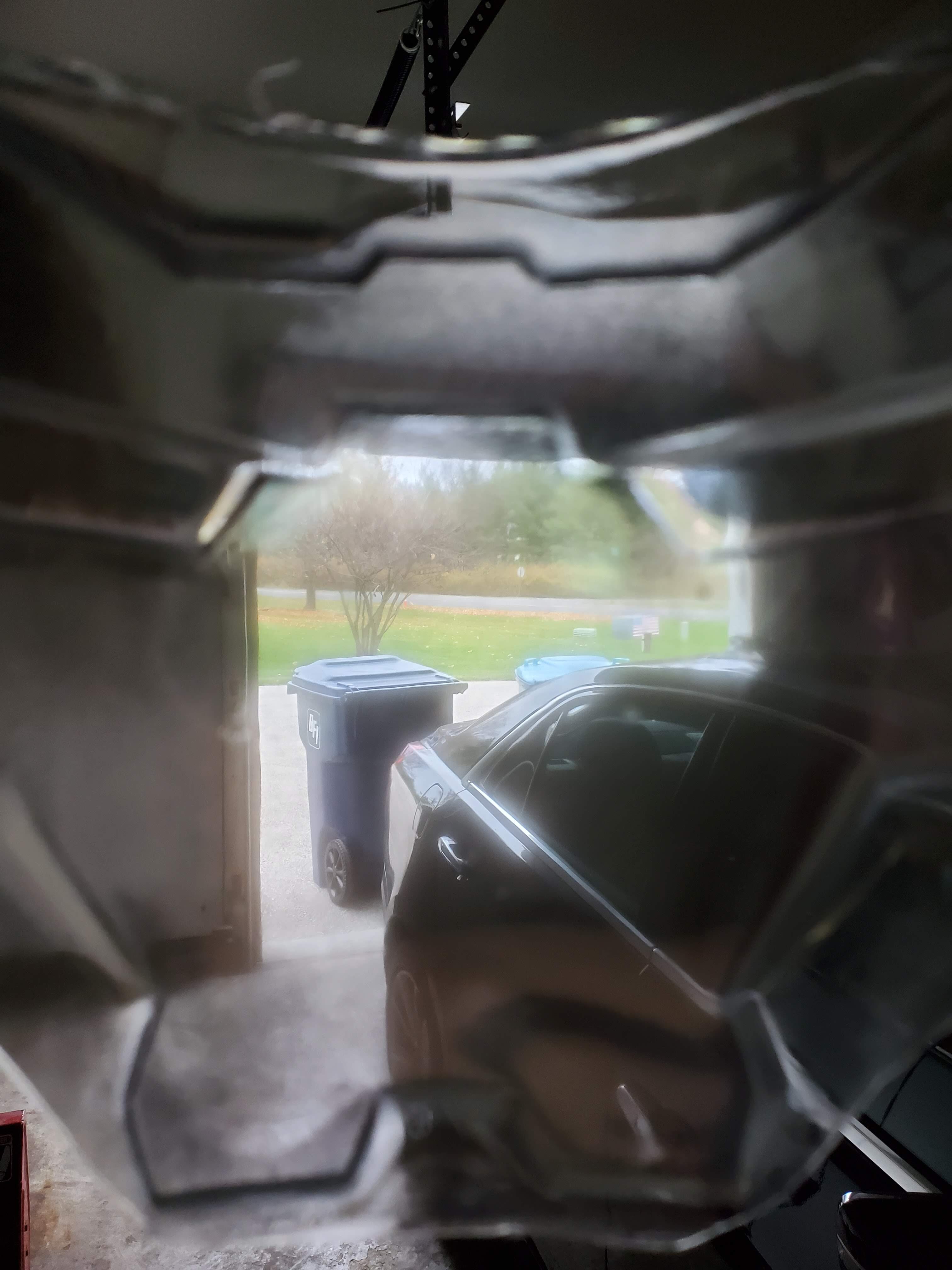 Helmet looks great. And that visor has a great visibilty.
Btw - that visor's shape is so similar to Iron-Man's face plate. Wow.

Reclaimara said:
Helmet looks great. And that visor has a great visibilty.
Btw - that visor's shape is so similar to Iron-Man's face plate. Wow.
Click to expand...

You know... I thought it looked really familiar but never quite placed it. You're totally right!

My 2022 con season is now over now that Twin Tiers has passed! Overall I'm super happy with the way my suit performs and looks but there are plenty of things to update now that the year is over. I've got a full list of repairs and rebuilds now that I've had plenty of experience with the armor. As always, the goal is focused on mobility and modularity! 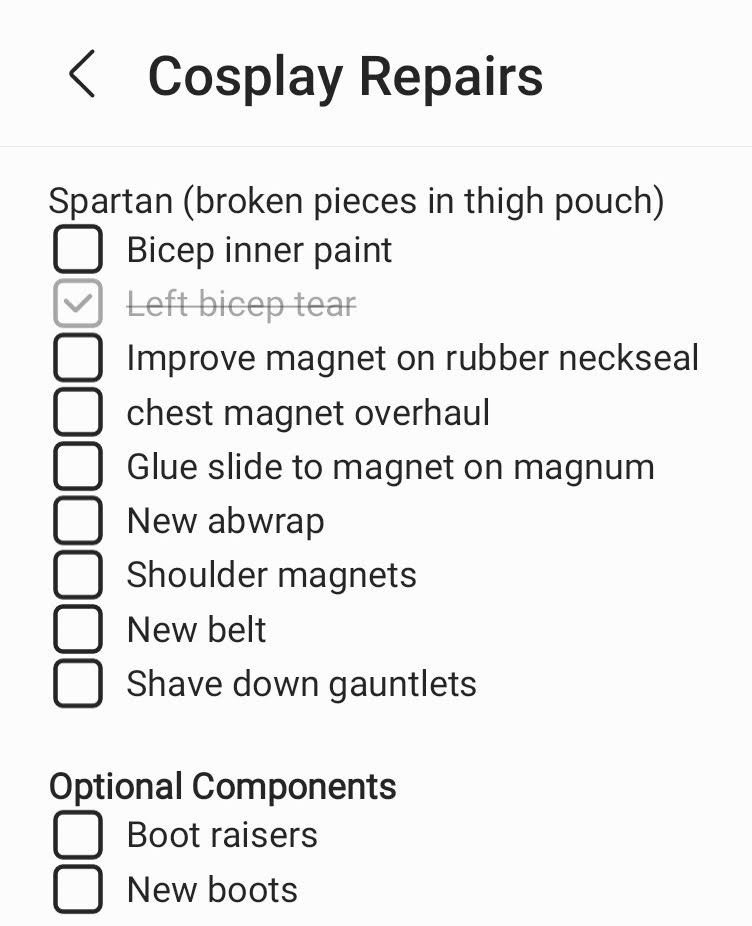 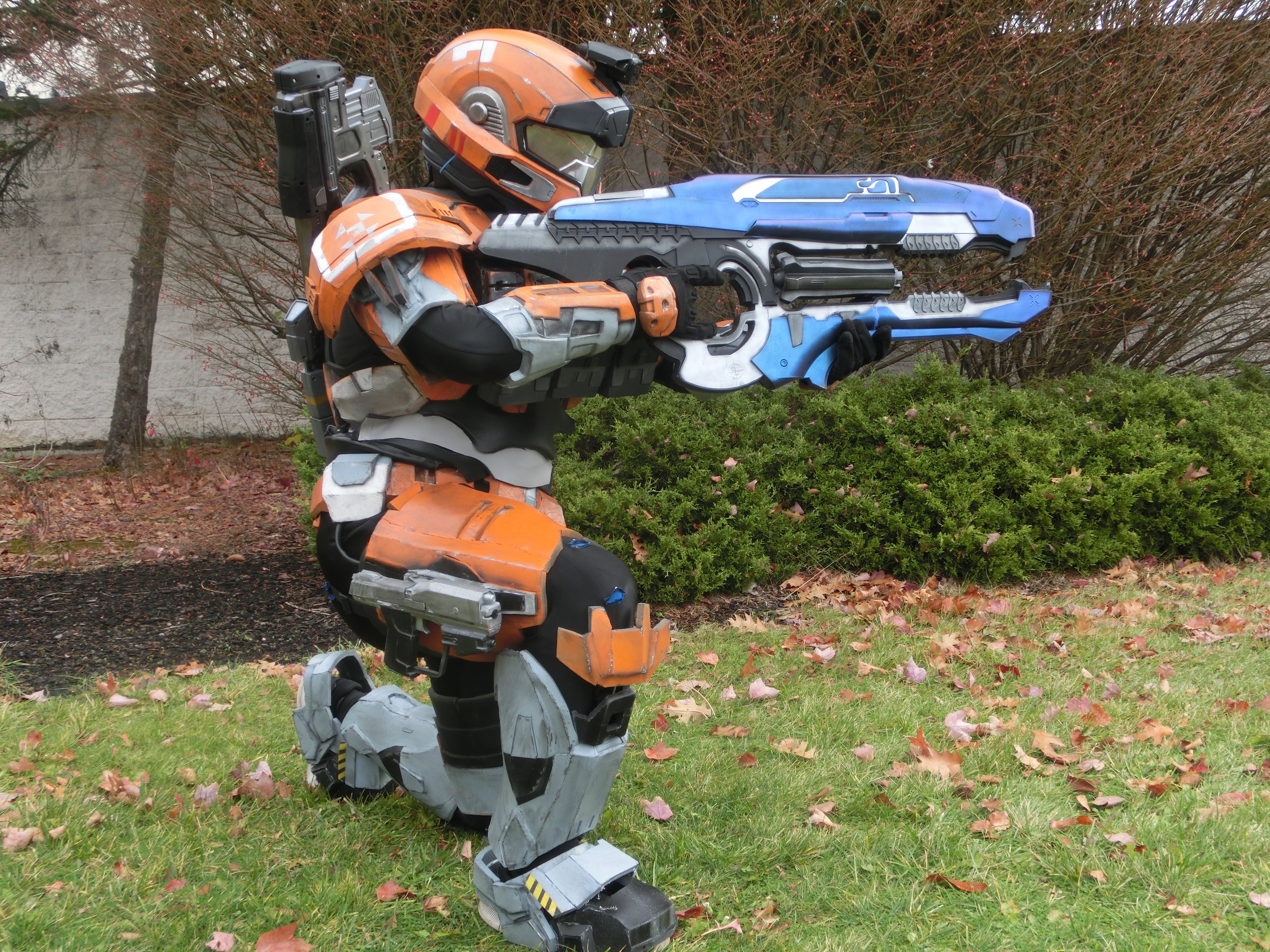 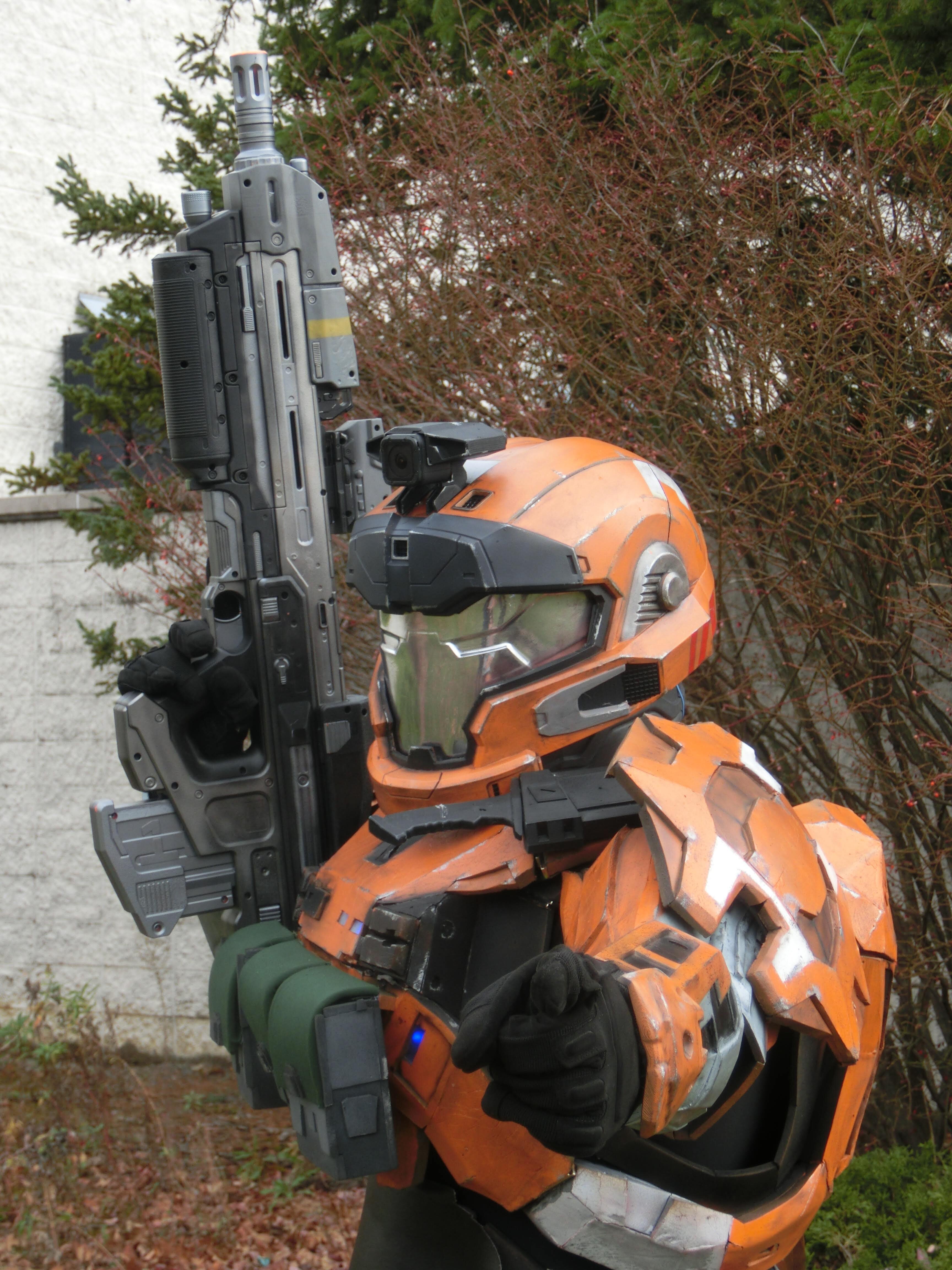 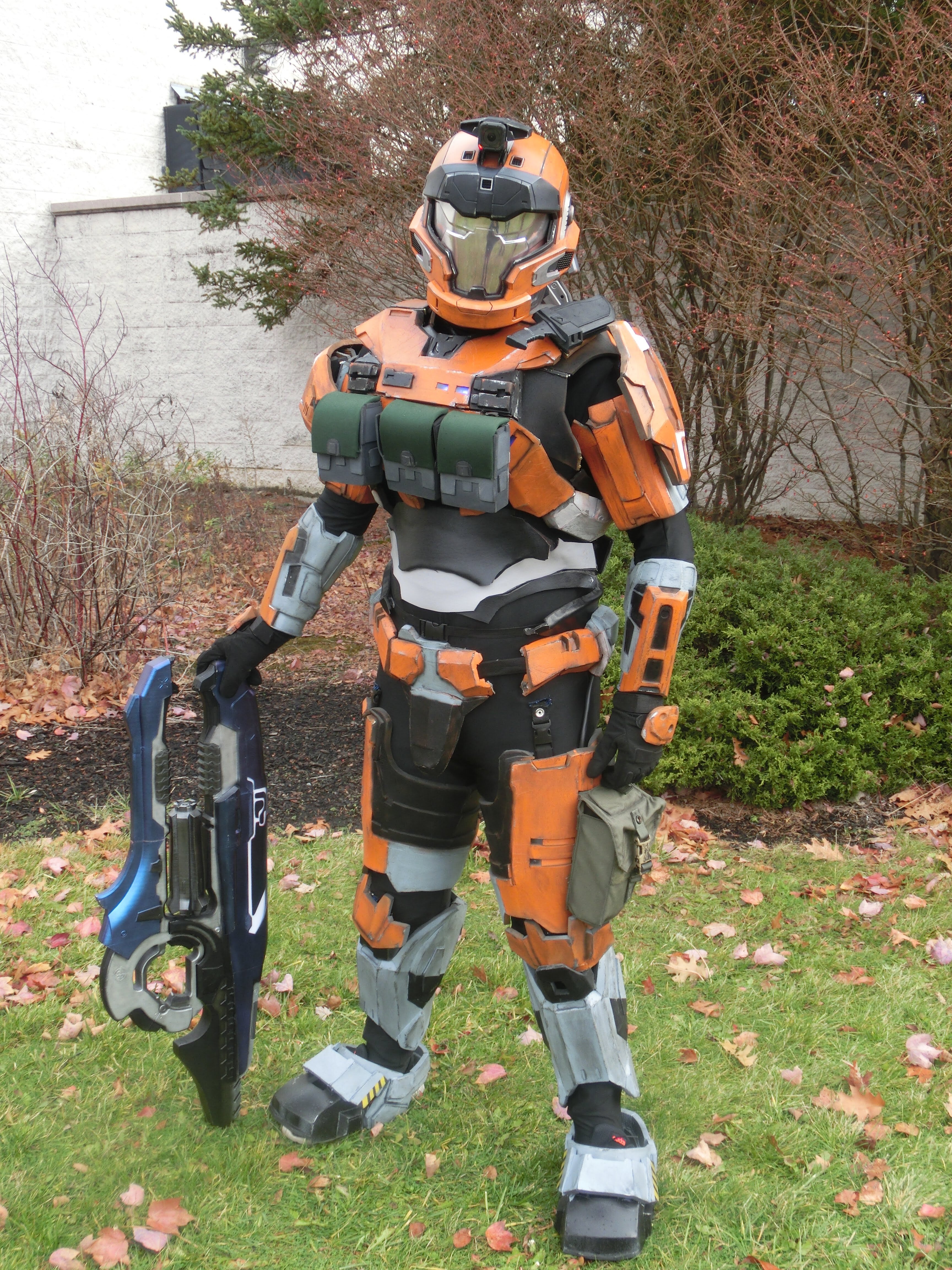